Are you ready to jump into the spiritual successor of the Road Rash series? Then get ready with our Road Redemption review!

Road Redemption is an action racing game where you lead your motorcycle gang on an epic journey of pursuit, blood, and speed. Through your travels, you will upgrade your character, bike, and weapons by completing races, assassinations, robberies, and more.
You’ll need to use kicks, grabs, counters, and other moves to stay alive.
Death is a constant companion on the roads of the wasteland, but it is not an end if you are killed, you keep everything you’ve earned so you can get back in the race.

Through local and online multiplayer, you can work together with your friends or grind them into road dust beneath your tires. You can play multiplayer online or through 2-4 player splitscreen.

Road Redemption is a spiritual successor to the old-school series Road Rash, which is owned by Electronic Arts and for which we haven’t gotten a new entry in a while. The IP has been dormant since it’s last entry in 2003, which is why when Road Redemption was announced as having a Kickstarter campaign a few years ago I was really excited to have that old-school Road Rash gameplay style brought into the modern era.

The main focus for this release is on the single-player campaign which is a blast to play. The game has a really cool reinvention of the way Road Rash used to be played, as it gives players procedurally generated levels so that every playthrough will be different… and every playthrough will be different a lot of times since when you die in the game, you need to start from scratch. But worry not since as you die you can spend your experience on permanent upgrades for your future runs, which means you can make some progress here and there as you go. It’s an addictive gameplay loop as every time you die, your character gets better making you feel like the time was well invested in the game, then you start your next run. 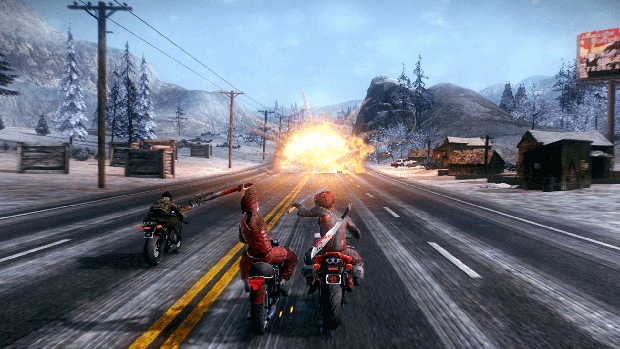 The game’s combat has you using different weapons to stay on top. You start with only a pipe and a sword-like item that you can switch between, but you will also pick up other weapons as you play through the game, including firearms and explosives. You can also upgrade your existing weapons to make them better, adding an extra addictive gameplay loop that hs you building a better weapons collection for you. You also need to pick your weapons depending on the style of biker you are going against. For instance, realized that a katana was not great against bikers with a helmet, but if you use the pipe to knock the helmet off, then you can decapitate the biker and get extra decapitation points. Each of the weapons is mapped to a direction on the D-Pad, so it’s easy to switch between them while driving. You can attack to your left and right sides which makes attacking and taking down enemy bikers a lot of fun. When you start the game, you will get a set of missions that need to be completed, and they will be different as you run through the game due to its procedurally generated nature. 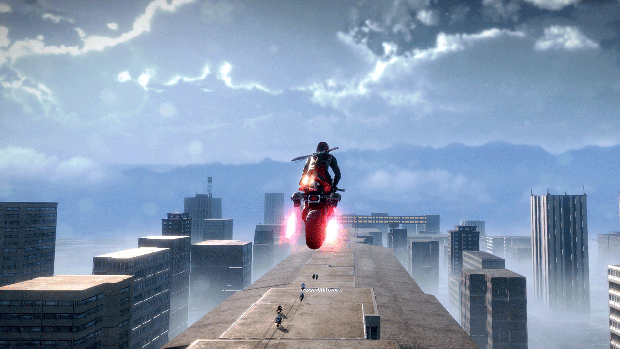 There is a quickplay mode as well, allowing you to dive right into the action playing on different courses, which resembles more of the Road Rash of ages past. As you do better in the races, you will unlock more courses as well, allowing you to dive deeper into the game. It game also boasts local co-op allowing for four player split-screen which are a hoot, especially when playing with friends. You will be elbowing your buddies on the catch as you play, while they are trying to take you down.

The one issue I had with the game was the dated art style. This one looks like it’s a PS3/360 title at times and not something from this generation, and I can see that holding people back from playing it. Now it is from a small development team, so I understand the limitations since they did nail everything else. As pixel art has seemed to hold up better for retro reboots, I wonder what if using a pixel art style more like the original Road Rash titles would have been an option. That being said, hopefully this isn’t a deal-breaker for you since it’s a very fun release. 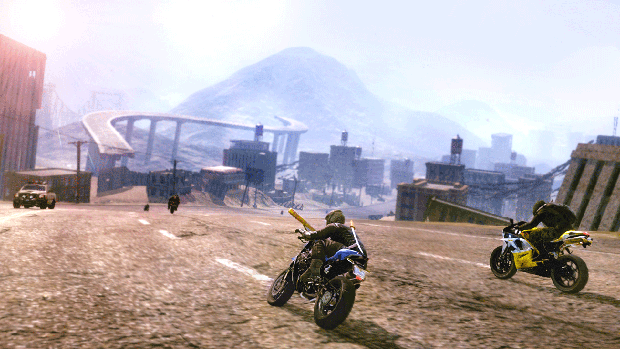 Overall, in my eyes, Road Redemption is a success. It’s a good, fun, spiritual successor to the old-school Road Rash games with the developers putting their own unique spin on the series, creating something fun and new. I think the visuals will hold it back from getting more people playing, which is a shame as the game is really good despite that.

Disclaimer
This Road Redemption review is based on a PlayStation 4 copy provided by Tripwire Interactive.