One Word by POWGI Trailer

At its core, One Word is a word search game. To those not familiar with that type of puzzle, you have a grid packed with letters that contain a certain number of words, either horizontally, vertically or diagonally, found in any direction. The goal is pretty simple since you need to find all words from a list on the grid until there are only a few letters left, which will, in turn, spell out a word.

In this game though, things are a bit different. Each puzzle starts with a quote by someone famous with a few words omitted in it. The number of words to fill in will vary from three to eight words. For each word to find, you are presented with a grid that will vary in size, sometimes as big as a 12 by 12 grid. Your first job will be to guess the word that should fill the blank space based on the letters present in the grid, as it contains only the letters that make your word. So for example, if you had to find the word “life,” then the grid would only contain those four letters with a single spot where the word is actually spelled correctly.


If you don’t know the quote from the author and if you don’t try googling it, it could be difficult to find something that looks like a word in a large grid, but the game provides a hint where it just tells you the word so that you can find it and proceed on to the next one. Once you’ve done this for all the words of the quote, you are presented with the completed quote and the puzzle will also, in turn, be completed. 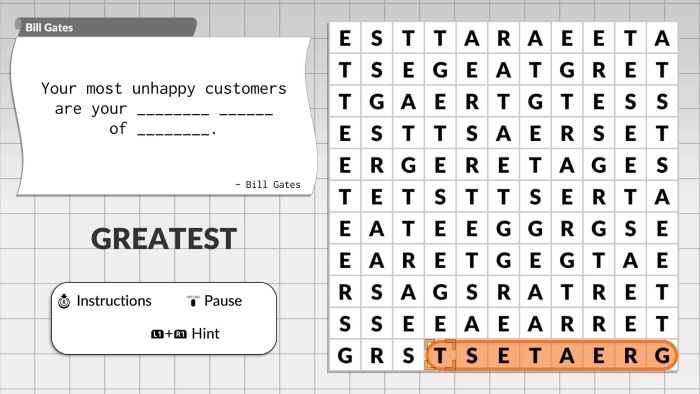 The controls for the game are really simple, as you just use the left arrows to move your cursor on the grid. Once you’ve found your word, it’s just a matter of pressing and holding the X button on either the first or last letter of the word, move all the way to the other end of the word, and release the X button. There really isn’t much else I could say about the visuals of the game, as it’s some pretty basic stuff with a grid full of letters – there aren’t many ways to present that!


As much as I am a fan of Sudoku puzzles, I used to be a big fan of word search puzzles some 20 years ago and used to do a couple each day just for fun. This version of the game, with only a single word to find, was an interesting way of playing, even though things do get repetitive after a little while (just like with regular word search puzzles). Compared to Sudoku, where you have to use a bit of logic to succeed, this is only a matter of carefully looking at the letters until you find what you need. With the mostly white screen, when you’re trying to find a word on a 12×12 grid (that ends up with smaller size letters to fit the screen), it’s not long before your eyes ask you to stop and take a break. 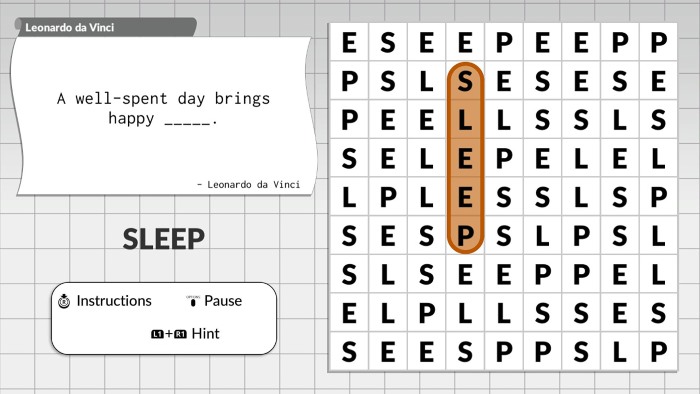 The game does have a big number of quotes to complete (120 to be precise), and the selection is really nice with big names like Bill Gates or the Dalai Lama that make things interesting while you complete each of the quotes you will get in One Word.

As for the trophies, this is another easy and quick double-platinum Opportunity! You only have to complete 32 of the total quotes, and the trophy description of each of them tells you who the quote is from, so you just have to find the name in the menu and hop in to complete it! As for the other Platinum trophy, this will be for the Vita version, as the game is a cross-buy release.


Final Thoughts
Although it has a different take on word search puzzles, this game quickly gets repetitive to a point where your eyes won’t like you anymore. It surely is a great opportunity for a quick Platinum trophy or two, but you won’t get as much fun from this one compared to Lightwood Games’ Sudoku title.

Disclaimer
This One Word by POWGI review is based on a PlayStation 4 copy provided by Lightwood Games.