Big Crown: Showdown sees friends become foes as they compete for the crown in 4-player local and online multiplayer combat, set over 3 wacky worlds full of medieval shenanigans. Avoid perilous hazards and engage in frantic fights as you attempt to knock your opponents off 15 crazy courses in the ultimate royal battle!

As Big Crown: Showdown begins, you see your castle being attacked by an evil wizard who not only gets rids of the King but also sends the Knights 100 years into the future. You are, therefore, going to be playing as the Knights in said future, and one of the things that confused me in this game is that I later realized that this wizard is never mentioned again once the opening cut-scene has is over. 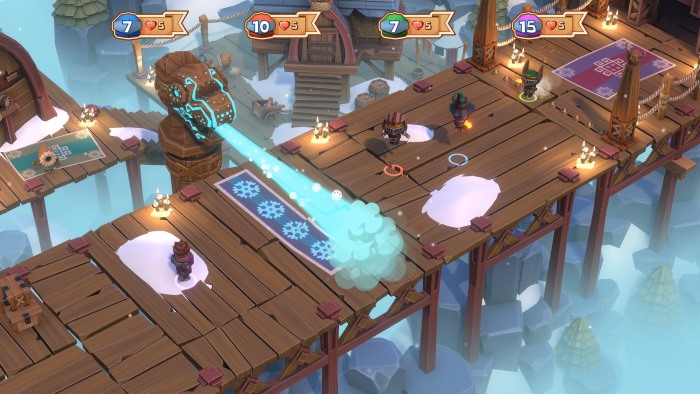 In this game, you start in a lobby and must host or connect to a game, and the setup immediately reminded me of Castle Crashers, a fun multiplayer game that released on the PlayStation 3 way back when PSN was beginning to be a thing. Playing online, of course, requires an active PlayStation Plus subscription, so do keep that in mind. I mostly played offline with friends and family, and I laughed at how the game recommends you to play offline with “friends and pizza,” which is certainly something that I ended up doing! In the lobby, you can select your colored character hat depending on the ones you have managed to unlock. One of my friends was sad to notice that the character’s color can’t be changed and is bound to the player number, which bummed him out a bit. This means that, for example, Player 1 will always be blue, Player 2 is going to be red, and so on. 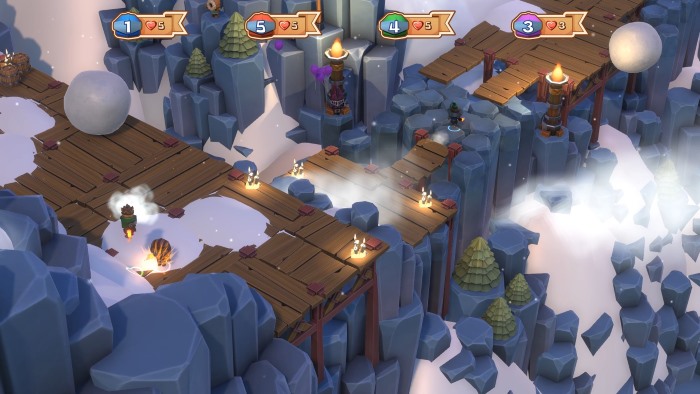 As for the gameplay itself, you basically have to reach the end of each short course, and your objective is to keep your remaining stock of lives as intact as possible. Each remaining life is added to your match total, and once a player reaches 20 points (aka 20 lives remaining overall), said player wins the match. I mentioned that each course is short which is why it takes a couple of minutes to complete it, so you’ll go to the next one right away until a winner is declared. A whole match lasts roughly 10-15 minutes, which isn’t long, making it a good party game.


In each level, you are following the linear path along the 15 different available arenas. It was confusing at first because there isn’t any explanation (not even telling you your objective which, as I mentioned, is for you to keep as many lives as possible), but since the mechanics are easy to understand, you’ll know what to do after the first couple of matches at most. The levels advance automatically, and I honestly thought that the default speed was really slow as most of the players in my party were waiting for the screen to advance on its own. 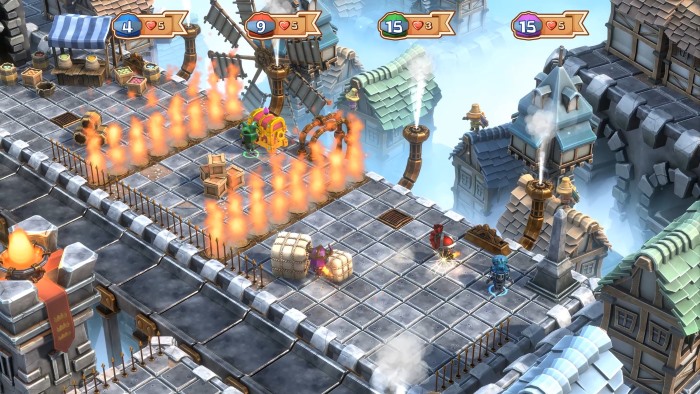 Luckily, you won’t only race the other players as you can also kick them out of the way while avoiding the different hazards. The levels aren’t difficult at all, so it can easily be played with your kids if they’re comfortable with using a PlayStation 4 controller. Matches can be customized to raise the difficulty a little by selecting the speed of the auto-scrolling level by setting it to be faster, but this doesn’t change the core gameplay mechanics.


As for the game’s presentation, the few different available environments types are great, and the game will send sound effects to the controller as you play. At first, I thought this was a nice feature, but this feature became annoying in the long run since they’re mostly sound effects of the characters dying.

In fact, the main gripe I had with this game is that with every friend I played, we had fun for only a single run of 10-15 minutes rounds and didn’t want to play another round since there is so little in this game. There aren’t different game modes available, so your only option is to race in the available stages, and that’s it. To be fair, I really enjoyed the “fish level” where the water rises and goes away in a few seconds, but that’s pretty much the only level that stood out after my time with the game. 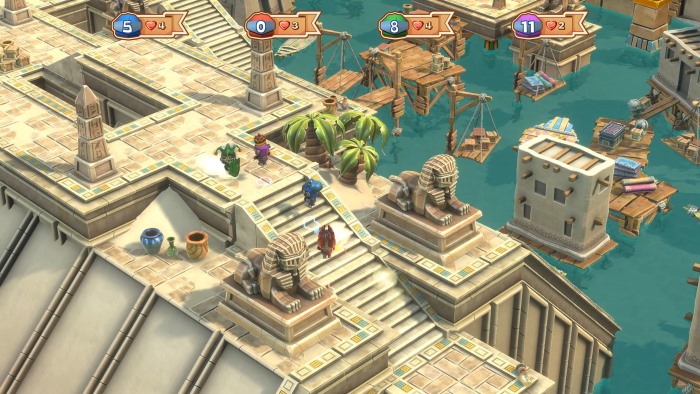 Final Thoughts
I liked playing Big Crown: Showdown with my daughter, but after a couple of hours or so, we thought we had seen everything the game has to offer. The core game is alright and does what it should correctly, but for $13, Big Crown: Showdown asks more than it can deliver. After playing a handful of 15 minutes rounds, you’ll understand that this game doesn’t offer anything more than what you’ve already seen.

If you’re looking for a good party game that will keep you entertained for a good time, then I’d suggest picking up Runbow instead, which is a bit cheaper and offers different game modes to take on for your next party.

Disclaimer
This Big Crown: Showdown review is based on a PlayStation 4 copy provided by Hyper Luminal Games.