With the upcoming release of Atelier Lulua, which will take us back in the kingdom of Arland, it was only right to get a chance to revisit the first three games in the Arland series on modern consoles. This is exactly what this deluxe pack is giving us, so come check out our Atelier Arland Series Deluxe Pack review of Atelier Rorona, Atelier Totori and Atelier Meruru!

Let’s start by exploring each game’s story, as they are all related to each other in the timeline. In Atelier Rorona: The Alchemist of Arland, you get your first visit to the city of Arland, a town that prospered because of the machines. The traveler who came by to educate people on those machines now runs an alchemist shop in Arland with the help of her apprentice, Rorona. One day, Astrid (the shop owner) is summoned by the King, as her shop will be closed down. Instead of going, she sends Rorona, who learns that they will have to prove that the shop has its place in the kingdom. What she learns is that they’ll be given a new assignment every three months for a period of three years that they’ll have to fulfill to keep the shop – and for you to not get a game over. With Astrid not really being motivated by all of this, she’ll end up giving the shop to Rorona and let her run things to keep the shop alive.


Fast forward five years in the timeline and you end up in Atelier Totori: The Adventurer of Arland. Totori lives in the small village of Alanya, at the edge of the Republic of Arland. Totori wants to become a great alchemist, after receiving her alchemist training by Rorona, but also a great adventurer to search for her lost mother, who hasn’t been seen for a couple of years. To become a licensed adventurer, she’ll have to get to Arland to the Adventurer’s Guild, a trip that will cost her and her friend Gino 100,000 cole (the game’s currency). With nothing close to that sum after a month of hard work, her sister ends up giving her the money even though she doesn’t like the idea of her becoming the same thing as their lost mother. Totori will eventually get her license and quickly become a full-fledged alchemist, but she’ll have three years to earn points on her license, or else it will be revoked. 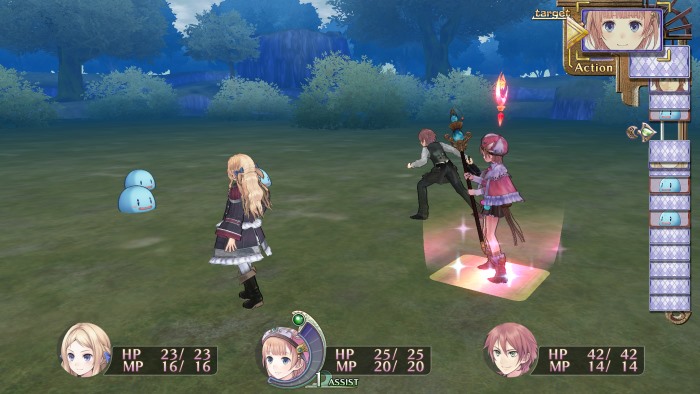 Going a couple of years later in the timeline we end up with the third entry in the series, Atelier Meruru: The Apprentice of Arland. This game takes place in Arls, a small city where machinery is not present, with their ruler Lord Dessier wishing to merge with Arland in a couple of years. Meruru is Lord Dessier’s daughter but is far from being interested in her role as a Princess. She’d rather sneak out of the castle to see her alchemist teacher who runs a shop close to the town: Miss Totori! After sneaking out one too many time, a conflict occurs between Meruru and her father about her wanting to become an alchemist. With a little help from Totori, her father ends up agreeing to a compromise to allow Meruru to prove that alchemy is worth it for their city. Meruru will have three years to develop the kingdom with her alchemy, with the ultimate goal of seeing the population increase by 30,000 after those three years are over.


The gameplay of the three games all follows mostly the same mechanics. The first one you may have noticed while reading about the story is the time. Pretty much every action you do in the games, whether it’s the synthesis, gathering materials or traveling, will consume days. Each of those days will bring you closer to the limit date of an assignment or quest you’ve accepted, so management will be important when scheduling what to do, and as you accept quests. A quest with a short deadline means you will have a high probability of failing, so you will be better off not accepting it or it will hurt your reputation.

The core part of the game revolves around synthesis – the art of creating new items by mixing certain materials together. While you start off with only a couple of basic recipes, you’ll get additional recipes from other people, find new stuff while gathering, or simply by buying new recipe books at the store. Each material has a quality level, so obviously the higher the quality, the better your synthesized item will be. You’ll also have to check the level required to craft an item because if your alchemist level is too low, chances are you’ll get some junk instead of what you were aiming to craft. And finally, after everything’s gone right and you have crafted your beautiful new item, you’ll be able to apply additional traits to it! 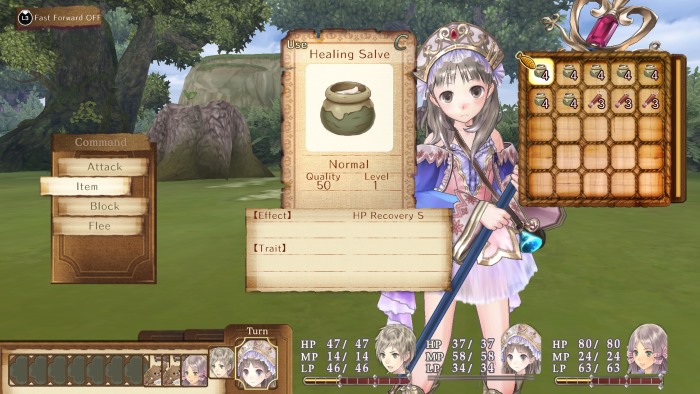 No matter the context of the game, you’ll get assignments or quests to complete, which will either be about finding and killing certain monsters or gathering materials to do some synthesis to create the required item. To do so, you’ll venture out of town into the world map, where you’ll be able to travel to other spots. Those field maps will be where you’ll wander off to gather materials and to occasionally fight monsters. Battles are turn-based, with the order of attack showcased by cards on the screen. The battle mechanics will allow every character to attack, block or use any skills said character might have. The main protagonist of each game, being an alchemist, means you get to use the items you have in your bag, which could either help you attack monsters or heal your allies.


If you’ve seen any Atelier game in the past, no matter the platform, then you won’t be surprised by the colorful visuals of the games in this awesome deluxe pack. Although not on par with what current console JRPG showcase, with the games being ports of the “Plus” versions that were released a few years ago, the trilogy is still nice to look at and runs smoothly without any framerate drops that could get in the way of your enjoyment.

My only experience with the Atelier series in the past was with Lydie & Suelle, which I did for last year, so I was happy to have the chance to discover a whole trilogy of Atelier games waiting for me. After spending dozens of hours with all three games, if you asked me to pick a favorite, I couldn’t choose because I’ve really enjoyed all of them! There were some weird moments in Rorona, about her alchemist teacher being a bit too obsessed about spending time in bed with her which certainly feels out of place in this day and age, but apart from that I’ve really enjoyed the overall stories, and the fact that they were sequels with references to previous games and characters to keep the overall arc going was also a great thing. 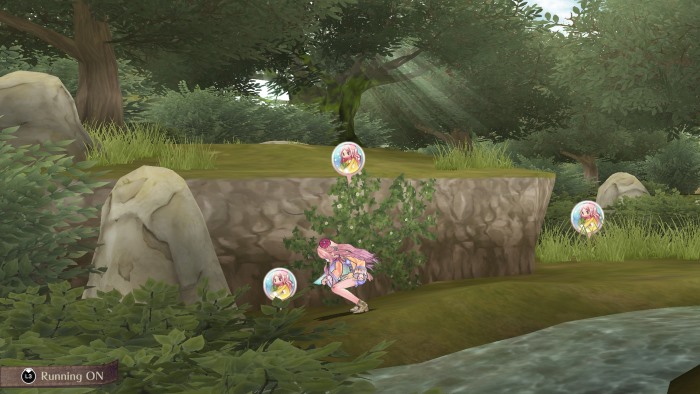 I really like the way the battles are simple and to the point since they not the main focus of these games. It’s part of the experience, and battles are fun to play when you encounter monsters, but it doesn’t overwhelm you and it does not keep you from the main attraction: gathering materials, creating new items and enjoying the solid stories you will experience in Arland. Speaking of which, the quests and assignments make sure to always keep you busy, so there’s never a moment in which you are left with nothing to do and without knowing what to do next.

The one thing that I had fun with but didn’t thoroughly enjoy is the limiting time aspect of the games. I liked it because it put some constraints into a storyline that is built around this and forces you to manage what to do instead of merely repeating the cycle of accepting quests, gathering, fighting and doing synthesis all over again. On the other hand, I’m someone who likes my JRPG when I can play them at my own pace, so having this time limit going on against you can somewhat feel a bit annoying. In the end, especially after going through the pattern three times, I’ve found myself enjoying it more than being annoyed by it, but your mileage may vary

As for the trophies, for a start, it’s three separate games, so you have three Platinum trophies to aim for if you have the time to invest yourself into the general arc. While a lot of the trophies will be unlocked by simply playing the games, there are a couple of trophies related to obtaining different endings that will require some clever save management here and there as well as a new game plus playthrough. Having said that, if you want all 3 Platinum trophies for your display you’re definitely looking at 200+ hours of gaming! 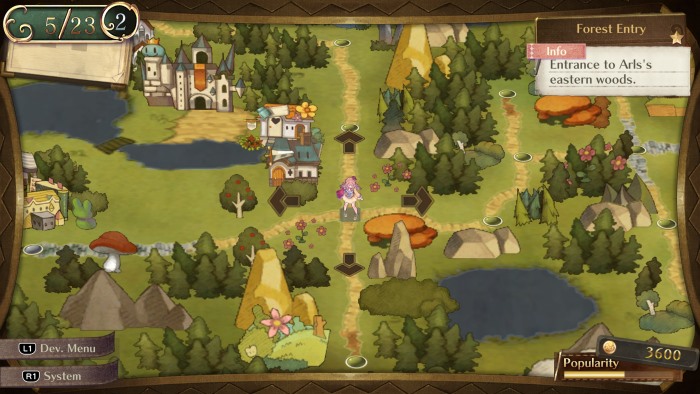 Final Thoughts
If you haven’t played the Arland series or any Atelier game, or if you did play them a few years ago and wish to revisit them, then this pack is your best option. With the fourth game in the Arland series out later this year, now is a great time to explore the Republic of Arland. And at this price, if you buy the pack, it comes down to $30 for each of these incredibly good games that will net you at least 60 hours of gameplay a piece. If you’re a fan of JRPGs, this is an incredible pack to kick off 2019 in style!

Disclaimer
This Atelier Arland Series Deluxe Pack review is based on a PlayStation 4 copy provided by KOEI TECMO.