8-Bit Armies from Petroglyph and Soedesco is a blocky, colorful and fun real-time strategy game on PS4. Learn more about it in our 8-Bit Armies review!


8-Bit Armies is a real-time strategy (RTS) release that is part of a trilogy that includes 8-Bit Hordes and 8-Bit Invaders (which I will also be reviewing soon). This being an RTS means that you will need to command your troops, build up your base and destroy your enemy’s base before they do it to you. This is not going to feel as heavy or overwhelming as other RTS you might have played, since the overall experience for this entry in the genre has been distilled to its main elements so that you can manage what needs to be managed as you build up your forces to completely destroy your opponent.

You will need to build structures by opening up the Building Construction Radial menu by pressing the L1 button so that you can select the building type you want to create. After this you will need to place the ghost image of said building at a spot near your HQ. Each of the factions in the game has different variations on buildings or you to select, so you’ll need to learn what each structure is and how t benefits you. For example, factories are a big part of your strategy since they will allow you to create units, while resource structures will support your base. 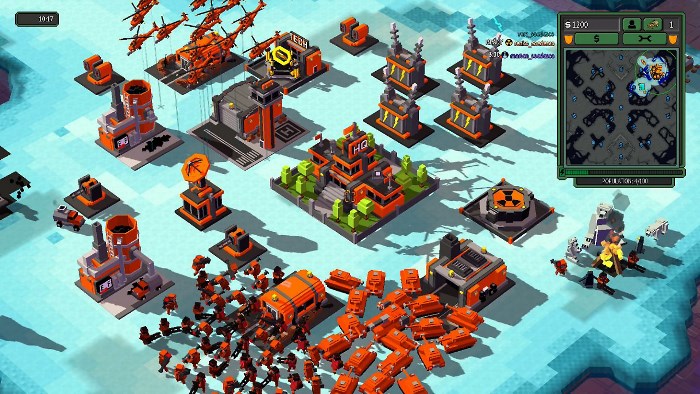 With your base ready to go and your units up to take a beating as they dish out some considerable damage, you will need to train soldiers to maximize your army’s potential. By pressing the R1 button you will open the Unit Construction Radial menu, after which you can press the Square, Triangle or Circle buttons to create a soldier that will be added to the group for each button. Training units will consume credits, so be sure to keep an eye on your budget so that you don’t overdo things. I suggest that one you have enough credits you queue up some soldiers to each of the face buttons so that you can build a massive army in as little time as possible.

Why group soldiers? Because you will control each of the three groups in your army by pressing the Square, Triangle or Circle buttons as needed. Just press one of said buttons to issue orders to the corresponding group and then press the X button to move the group to that location. If you press the X button on top of an enemy, then you will send your group into action and they will attack until one of the groups is no more. And if you want to add some extra oomph to your army, you might want to build some vehicles or aircraft to aid you on your attack, so be sure you build the right structures to open up those units. You need to do this because each unit type is strong against one type while being weak against another, so do pay attention! 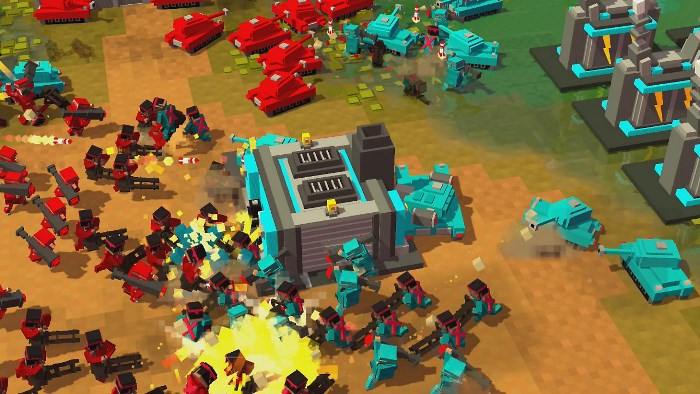 Your structures will require energy to function, so you will need to build Power Plants to accommodate the needs of the building groups you have constructed. You will see a power bar on the right side of the screen that will let you know if you have enough energy as is or if you’re in desperate need of building some extra Power Plants so that your supply can meet the demand. Not having enough energy is very dangerous since it might mean that your defensive turrets don’t have enough juice to do their job, opening you up for a nasty attack.

If you want to really get things going, then you should also build up a Lab or a Tech Center to open up even more units and structure options for you to create. The units you can create after building the aforementioned structures will be more powerful and helpful than the soldiers and buildings you can create at the start of a battle, but they will require you to be vigilant so that your enemy does not destroy such valuable buildings… or that they don’t beat you to the punch and build some of their own and unleash their more powerful troops on your puny groups! 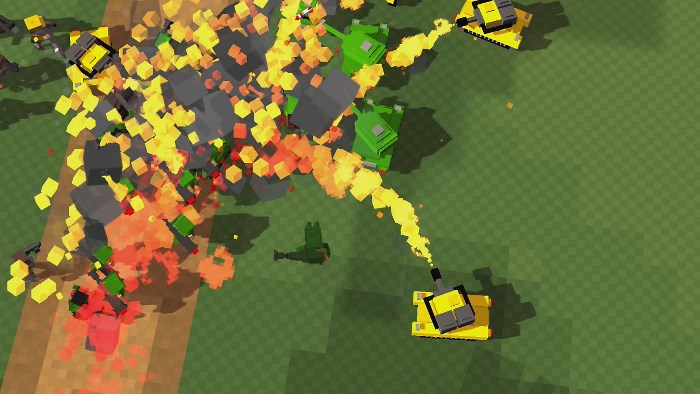 As you play each battle you might run into colorful crates out in the open. You will need to quickly collect them so that you can gain some bonuses such as extra units or maybe even some extra credits for your cause. It seems too good to be true, right? Well, yes and no. While crates do provide you with some much needed bonuses, you will need to open them with infantry units cine they’re the only ones that can open them. Oh, and you do need to prepare for the worse since some crates are booby trapped!

There are different factions in the game, and each one has a different structure tree and unit tree that you will need to keep in mind at all times if you want to do things right and actually have a chance at defeating your opponents. Not having the right combination of units will keep you from opening the door to building more advances structures or training stronger and deadlier soldier types, and you can bet that your opponents are not going to go easy on you if you don’t know what you’re doing. I suggest that you focus on one faction at a time so that you can learn everything there is to learn about them, because jumping back and forth between factions won’t let you specialize in what makes each one tick.


Each mission that you take on in Campaign Mode will have three stars for you to aim at obtaining. The main objective might be, for example, that you destroy the enemy HQ – as expected- but the other stars will offer bonus objectives for you to complete. The first mission, which will act as a tutorial won’t have any extra objectives, but once you get to the second mission and on you will get extra things to do such as not training any infantry units or obtaining the Bronze (main objective) and Silver (the bonus objective I just mentioned) stars within a set time limit. The extra objectives are only available if you’re playing the game on Normal or Hard, so if you’re the type of player who likes to 100% a game, you should change the difficulty at the mission selection screen. 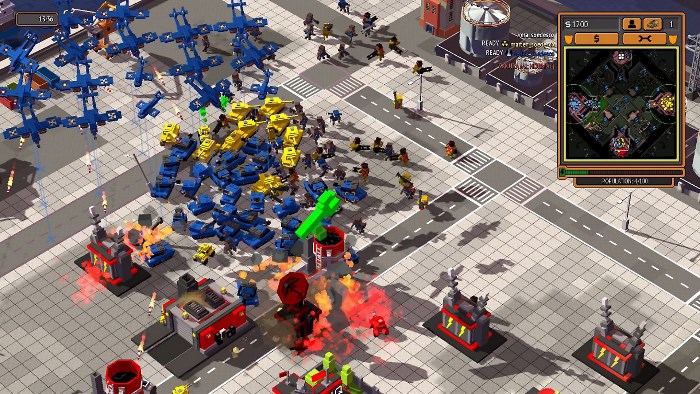 The game also includes a Co-Op Campaign mode so that you can take on the missions with someone else, either by joining an existing lobby or by creating a new lobby of your own. There is also a Skirmish mode where you can take on up to five more enemies depending on the selected map, with each player taking on one of the six available factions and being split into teams if needed. There is also the option for local multiplayer quickmatch or for you to take the fight online where it’s everyone against the world.

A complaint that is becoming more and more common with PlayStation 4 releases is that the in-game text is tiny and very hard to read, forcing you to sit closer to the TV to be able to make out what the game is trying to tell you. Information is very valuable, so you might as well sight close and tight as you check out the in-game manual so that you can review everything there is to learn about the game. I just wish there was an option to increase the size of the text because having to move a couple of feet forward to read the text is not ideal. 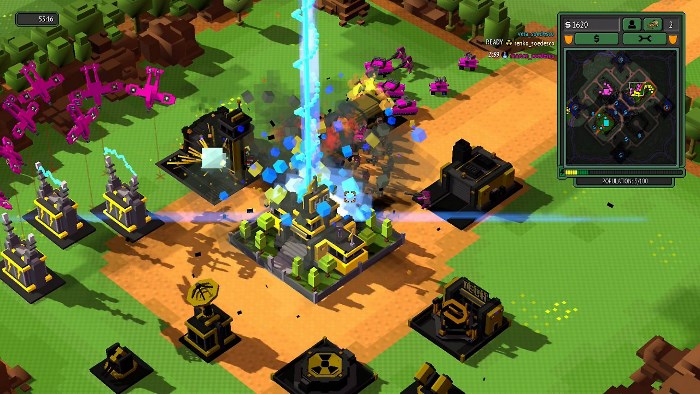 8-Bit Armies is a fun distilled RTS experience on PlayStation 4 that has plenty of single player and multiplayer content for you to enjoy. The game is easy to get the hang of, as you split your units into group, build structures to open the way for you to build other structures and create new units so that you can keep your enemies at bay before you can go on the offensive. It’s a solid entry in the genre, and one you’re going to enjoy. 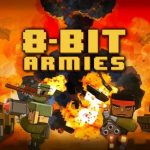 Disclaimer
This 8-Bit Armies review is based on a PlayStation 4 copy provided by Soedesco.