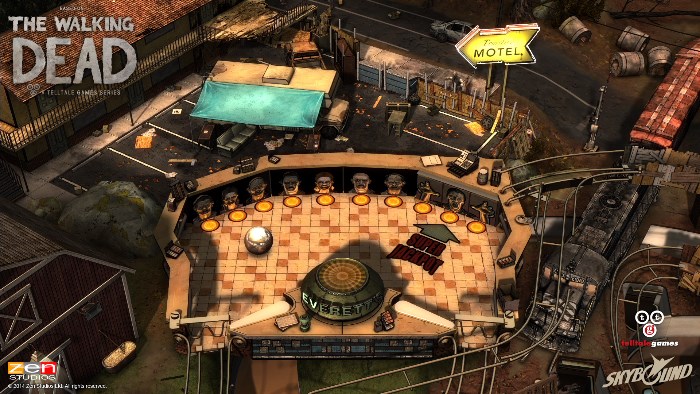 If you’re a fan of The Walking Dead franchise, then you’re probably familiar with Telltale Games’ take on the series. The Walking Dead Pinball table you can purchase in Pinball FX3 is based on the first season of said point and click adventure, so you will be using your pinball skills to take on locations from said season, visiting the Travelier Motel, St. John’s Dairy Farm, the Bell Tower and more as you hear dialogue from the voice actors, all with a look that mimics the art style for which the series is known for. 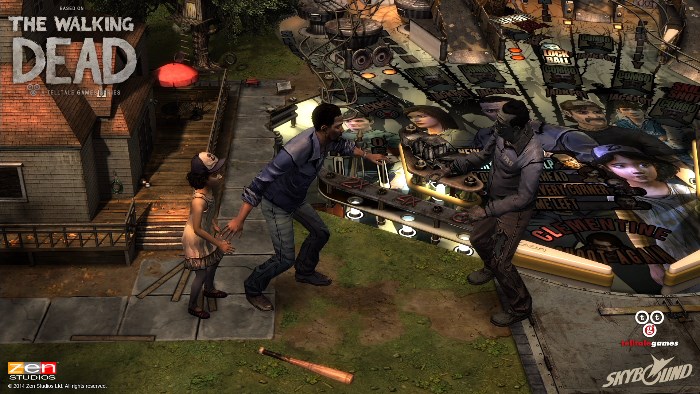 As for what you can expect when playing this digital pinball machine, the table has several things for you to do. There is a skill shot on the right side that is activated by sending the ball towards the bell tower within five seconds of a new ball being launched. There is a walker that is hanging outside of a trap door, and if the “Keep Out!” sign below it is blinking, you can hut hum to send him down the trap door so that you can access the mission hole from which you can select the episodes in the season. 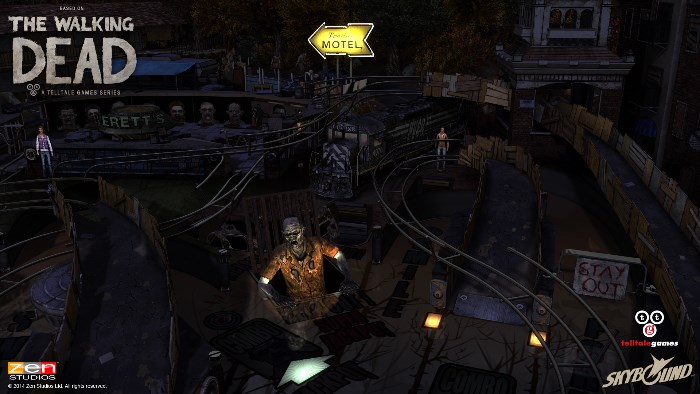 One of the mini-games will spawn walkers down the middle of the table, and you will need to kill as many as possible to activate the combo on the right side of the table to launch the ball towards the bell tower to lure the walkers away from your flippers. If you manage to hit all seven walker heads in the mini playing field in the upper left corner of the table, you will get to do a supply run to try and secure as many supplies as possible to considerably boost your score. There is also a special mode in which you will get a chance to use a sniper rifle to try and take out some walkers. For this mode, you will move the sniper scope with the flipper buttons and shoot at walkers with the launch button before time runs out. 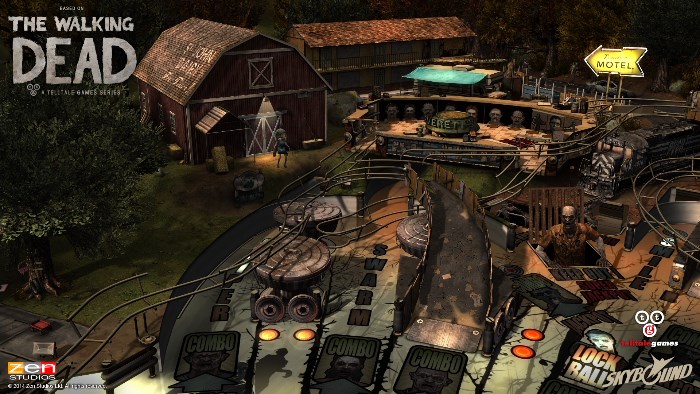 This pinball table also shares some gameplay elements with the point and click adventure series in that you will need to make choices as you play which will impact the way your run goes. You might need to choose who you’re going to save during a zombie attack, or you might need to try an obtain tools, fuel or if you’re lucky, a vehicle to help the group survive. Since I’m indeed a fan of what Telltale Games has done for The Walking Dead, seeing the whole group represented on the pinball table, as well as Lee and Clementine fully present with 3D models on the table doing this and that – as well as hearing their voice actors reprise their roles – certainly brings a smile to my face. 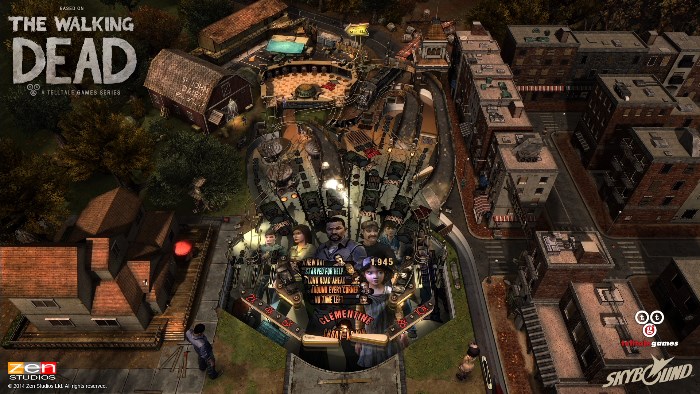 The Walking Dead Pinball table for Pinball FX3 is a great option for fans of the franchise, and of Telltale Games adventure take in particular. It offers several mini-games to play, a great take on the locations you get to visit in the first season of the point and click releases, and unlike the games themselves, it’s a fast-paced pinball table with plenty of action. Being able to play the table at home or on the go is a big plus of the Nintendo Switch version, and being able to flip the screen vertically when playing in Portable or Tabletop mode is an excellent way to get an experience that is closer to playing an actual table in real life. 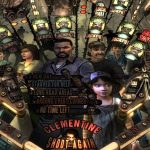 Disclaimer
This The Walking Dead Pinball review is based on a Nintendo Switch copy provided by Zen Studios.