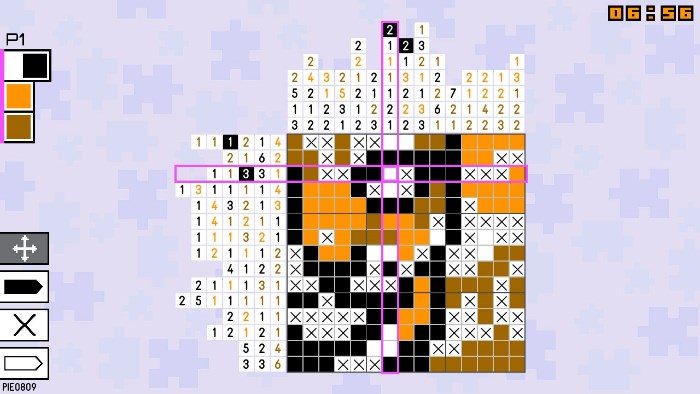 In Pic-a-Pix Pieces you are tasked with completing larger images by taking care of smaller puzzles that transform into the pieces of said images, hence the name of the game. Each puzzle consists of a blank grid with clues on the left side and the upper side that correspond to the number of colored squared you must fill out for each lane and column. The color of the number will obviously tell you what color the squares will be, while the number dictates how many squares in a row will be of said color. You will need to pay attention to spots where colors overlap since this will be a valuable clue that will speed up the process. If two consecutive numbers in a lane or column are of the same color, then that means there will be at least one blank space between them.


The game can be controlled either with the Joy-Con or the Nintendo Switch Pro Controller, or by using the console’s touchscreen when playing in portable or tabletop mode. You can use the left analog stick or the D-Pad to select a square and can paint them with the selected color by pressing the A button. Colors can be selected by pressing the L ir R buttons so that you can use the right color for the job. Empty squares can be marked with the B button so that you don’t accidentally paint over them. If you’re having trouble you can press the Y button to check if what you have filled up in the grid is correct, but you should know that doing so will keep you from earning a medal for that puzzle. 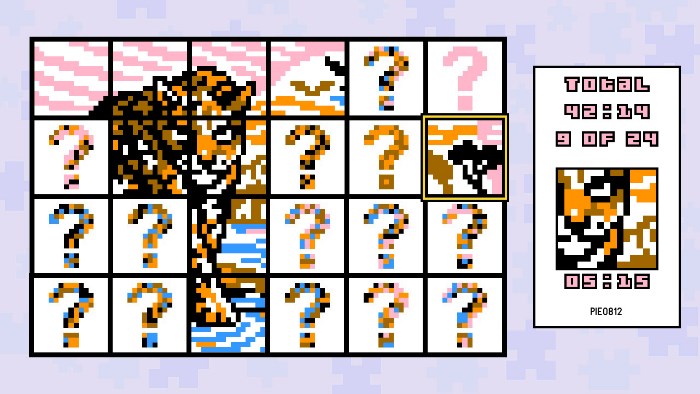 Step one with Pic-a-Pix pieces will be to select between the types of available large image groups. These could be three by two pieces long, four by three pieces long, or six by four pieces long. Once you select the size of the larger image you will be taken to a separate menu so that you can take on each individual puzzle that forms the larger image. Once you get started with a puzzle, my suggestion is that you first take care of the lanes and columns in which adding up all numbers gives you a total that is equal to the total number of available blank squares for said lane or column because that means there are no blank squares to be left as is. There are also sometimes entire lanes or columns without any numbers, so be sure to mark those in full so that you don’t end up adding a colored square by mistake. 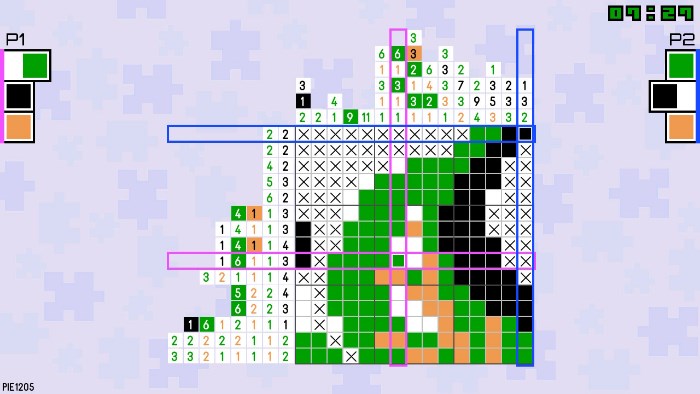 The game includes 20 large images in total, each divided into 12 to 24 pieces with puzzle grids that are 10×10 and up to 20×20. And once you’re done with the puzzles in the main game, you can dive into the puzzles included from the two demo versions of the game. On top of these, there are also puzzle packs available for purchase. Right now there are two available DLC packs at $2.99 a piece (15×15 Pieces Pack 1 and 20×20 Pieces Pack 1), each adding 48 puzzle grids that complete two large images. 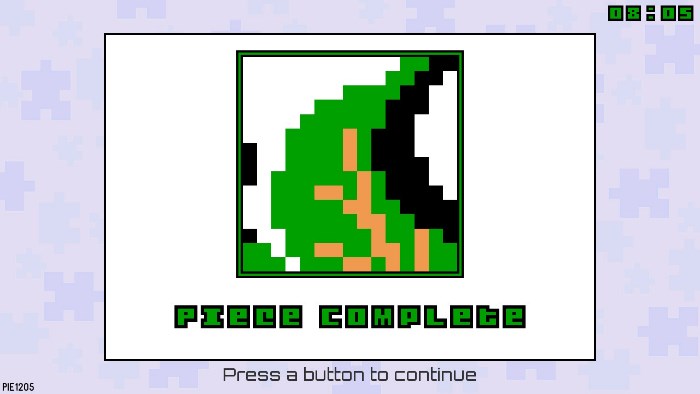 I love this type of puzzle game, and Pic-a-Pix Pieces had me playing for hours and hours as I took con completing each of the pieces to the larger images, as I aimed to complete all of them without using the fit option so that I could get that shiny gold medal for the final image. I’ll definitely be getting the two DLC packs since more puzzles is exactly what I’ll want to play as soon as I finish the last one included in the main game. Go buy Pic-a-Pix Pieces!

Disclaimer
This Pic-a-Pix Pieces review is based on a Nintendo Switch copy provided by Lightwood Games.

Drowning Will Release On PS4 Next Week