Help a maniacal bunny from the future win a campaign for Mayor by going on a bloody tour through the city removing its scum. Seriously. Learn more in our Not A Hero: Super Snazzy Edition review!

Professional assassin turned amateur campaign manager Steve is charged with cleaning up the city by an anthropomorphic rabbit and mayoral candidate from the future named BunnyLord. Now Steve and his expanding roster of dubious heroes must wield their unique skills to shoot, slide, dive, and take cover behind a political platform built on ethics, accountability, and an inordinate amount of gunfire. Eliminate the criminal underworld of the city’s three major districts and persuade undecided voters to your cause, tackling the issues that matter by putting a gun in the mouth of those issues.

Through the power of ISO-Slant™ technology and a wasted youth, London-based developer Roll7 (OlliOlli) delivers the greatest 2¼D cover-based indie shooter of all-time, ever.

Next Level Shootouts – Use reasonable force unreasonably in a dynamic mix of run-and-gun gameplay and cover-based shootouts. The intuitive quick-snap cover system lets you slide, roll, and dive into cover, dodging enemy fire before fighting back with tackles, executions, and 100s of bullets.

Roster of Not Heroes – Select between 9 different heroes, each with their own distinct gameplay style and crime murdering abilities. Blast the city’s scum through doors with Cletus’ a shotgun, slice them in half with Kimmy’s katana dash, or simply bash crime in its terrible face with Ronald’s hammer.

Dynamic Missions – Go ham on primary objectives and (sometimes random) secondary goals but be prepared for unexpected mid-level events that turn the tables on the anti-heroes in an instant. SWAT teams, gun-toting elderly, helicopter gunships, pandas, pugs and suicidal samurais stand between you and victory.


Not a Hero is actually a few years old now. I did play through it on PlayStation 4 back when it launched in 2016, so I was very happy to hear that the game was coming to the Nintendo Switch as the Super Snazzy Edition. I’ve also loved roll7’s work on the Olli Olli series as well, which is why I was definitely up for taking Not a Hero out for a new spin. 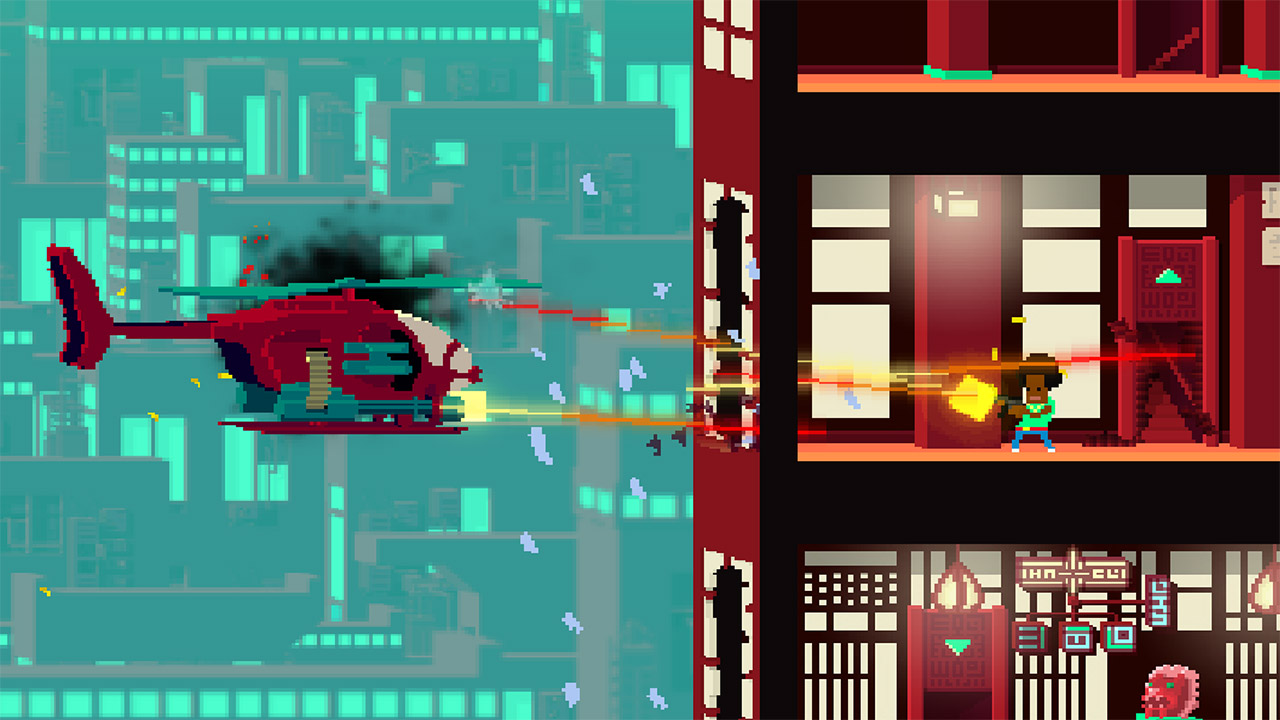 The game is a 2D shooter/brawler. You start as an anthropomorphic bunny from the future who wants to be mayor. By recruiting people to your campaign team like Steve (who is your first avatar choice), you jump into the city and eradicate the drug dens and mobsters by killing them while being as cool as possible. The more kills and missions you complete, the better BunnyLord’s political campaign will do, allowing you to get more recruits/playable avatars to help assist on the bloody and violent political endeavor.

The game drops you at a starting point, and you have to work your way through the level killing and executing all of the bad guys on the stage. There is a neat cover system that has the 2D working with separate planes so that you can jump back and forth avoiding gunfire as you work your way through the levels to your end goal. It’s a fun gameplay mechanic that keeps the action going as you jump in and out of each section. 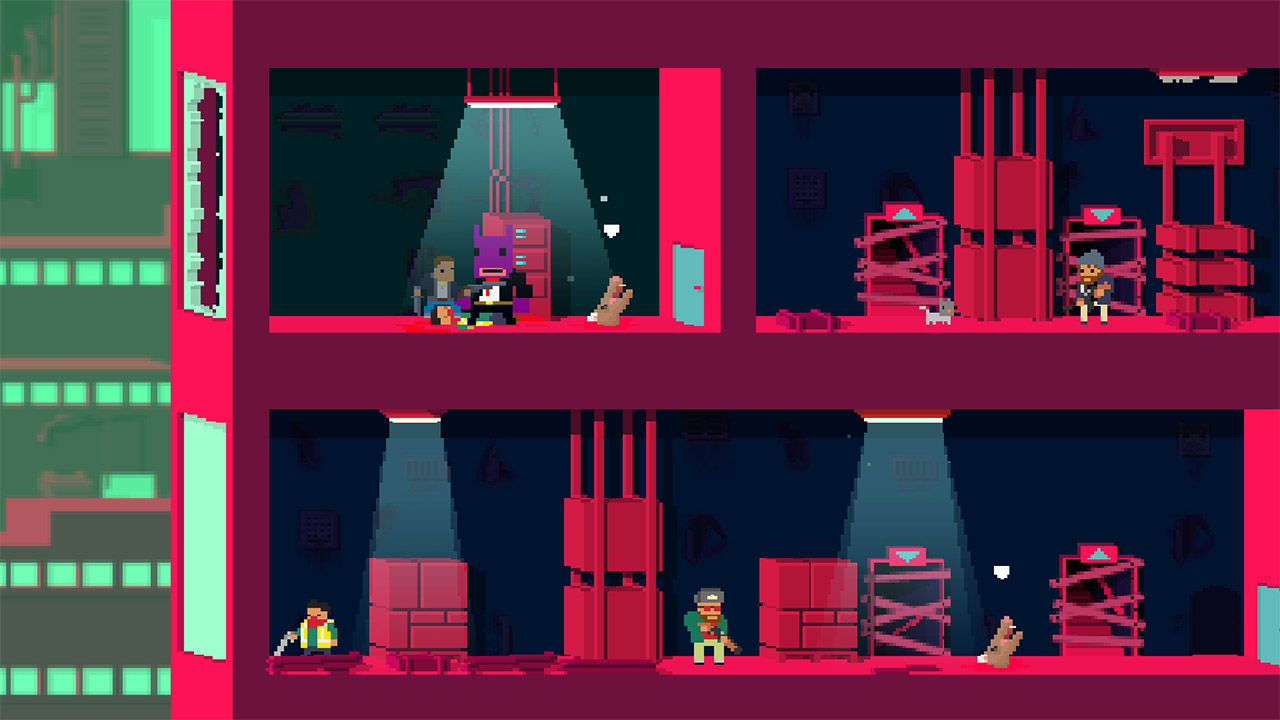 I did like how the levels seemingly had multiple ways to complete them, allowing you to get creative with the ways you were taking on each stage. Each character has its own abilities and depending on which one you are playing as you will end up favoring different routes to take you to the end. It gives the game a ton of replayability, as you experiment with the different playable characters, going back at it to find a new way to take on challenges.


I love the 2D pixel art of the game as it gives the game a distinct feel. What’s really impressive is the degree in how the levels feel different from the drug dens, to the Russian mafia and the Yakuza, they all feel different. Not easy to do when working with pixel art! The game also moves at 60 fps, showing no slowdown as you mow your way through the different levels, which is definitely a big plus for what is the definitive edition of the game. 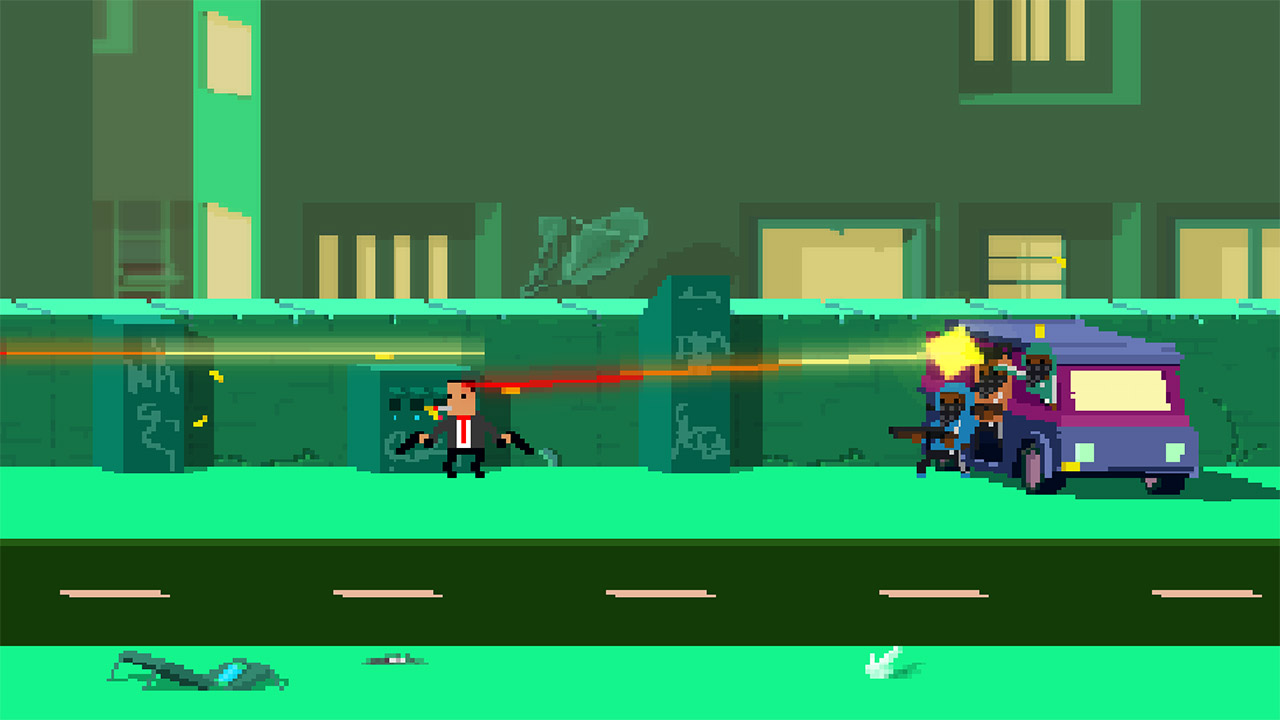 I enjoyed Not A Hero and loved playing through it again on the Nintendo Switch. It’s the same great game I played just now portable. If you like the idea of helping with the Mayoral campaign of a bloodthirsty bunny from the future, then this is a game you should play today.

Disclaimer
This NOT A HERO: SUPER SNAZZY EDITION review is based on a Switch copy provided by Devolver Digital.