Mother Russia Bleeds is a 2D brawler that can be played solo or in co-op with up to four players. As the title suggests, the game is set in an alternate reality Russia and focuses on the story on a group that has been imprisoned for no reason, with their captors getting them getting them hooked on some weird drug known as Necro. Without Necro, the members of the group suffer crippling withdrawal symptoms, so they need to be topped up regularly just to feel human again. Their ultimate goal is to fight their way out of captivity and up the ranks to find a way to improve on their overall situation while you manage their Necro addiction. 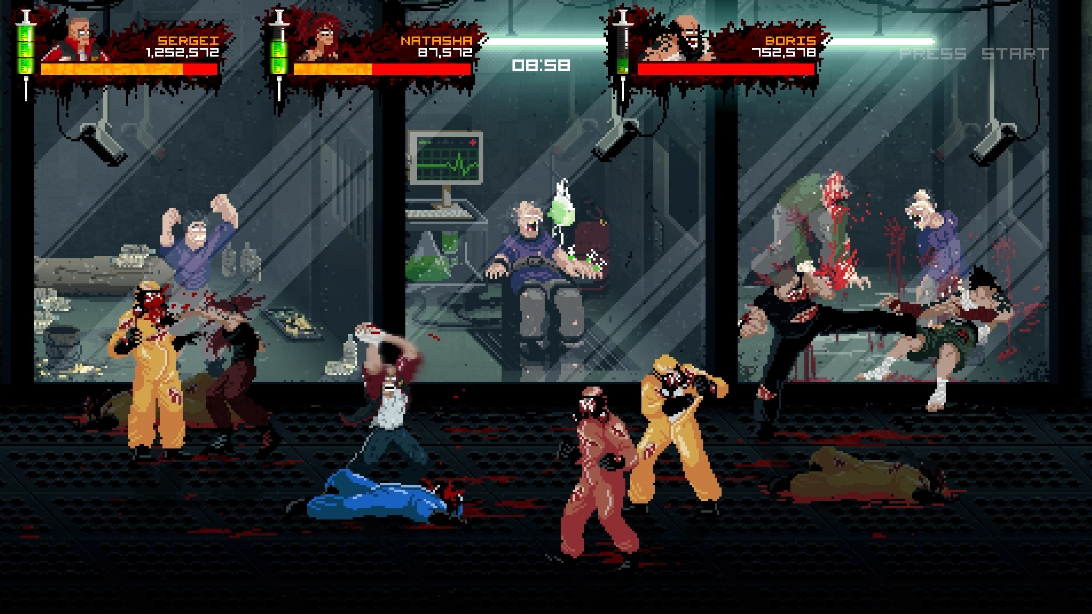 Due to the level of violence, blood, and gore, as well as the high level of drug references, the game is not suitable for players under 18 years of age, which is why the game is rated M for mature. Because of this, you should, as per this release’s rating, expect a game with the use of drugs, violence, crude humor, strong language, sexual content, blood and gore, and nudity. As for the gameplay mechanics, the development team has taken their inspirations from well-known beat ’em up classics such as Final Fight and Streets of Rage, to name a few examples. 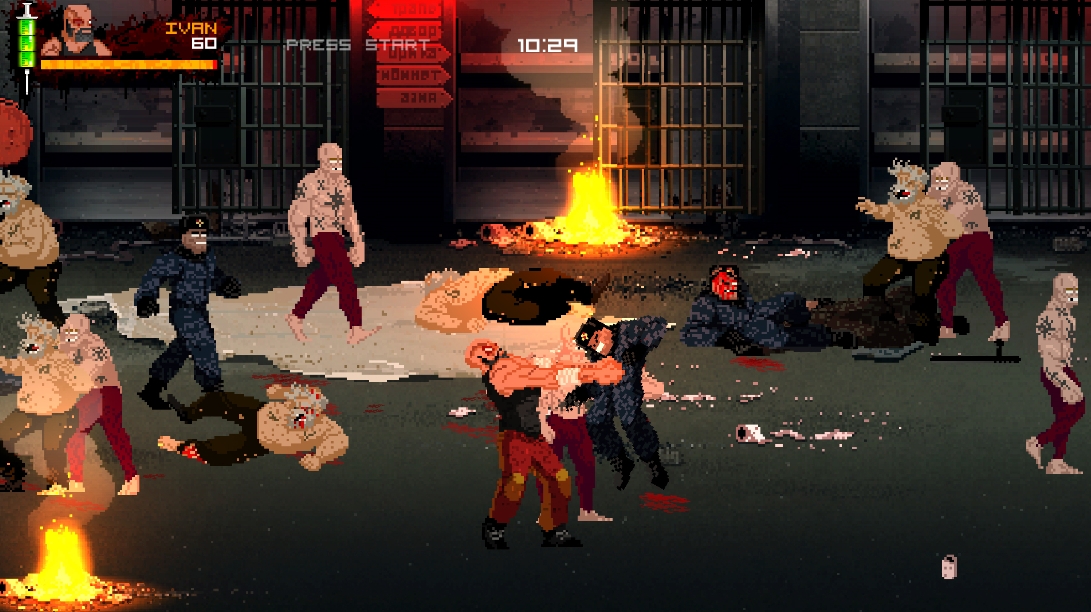 The developers have included some clever effects to make the fighting look more authentic, giving every punch and kick a very real feel. The drugs you can use in the game can heal you, and Necro, the one drug you are addicted to makes you stronger, allowing you to land solid attacks on your opponents, but only for a few seconds. And if you need a bit more of the drug then you can simply harvest more of it from the many dead bodies you leave behind from the effects of your onslaught. 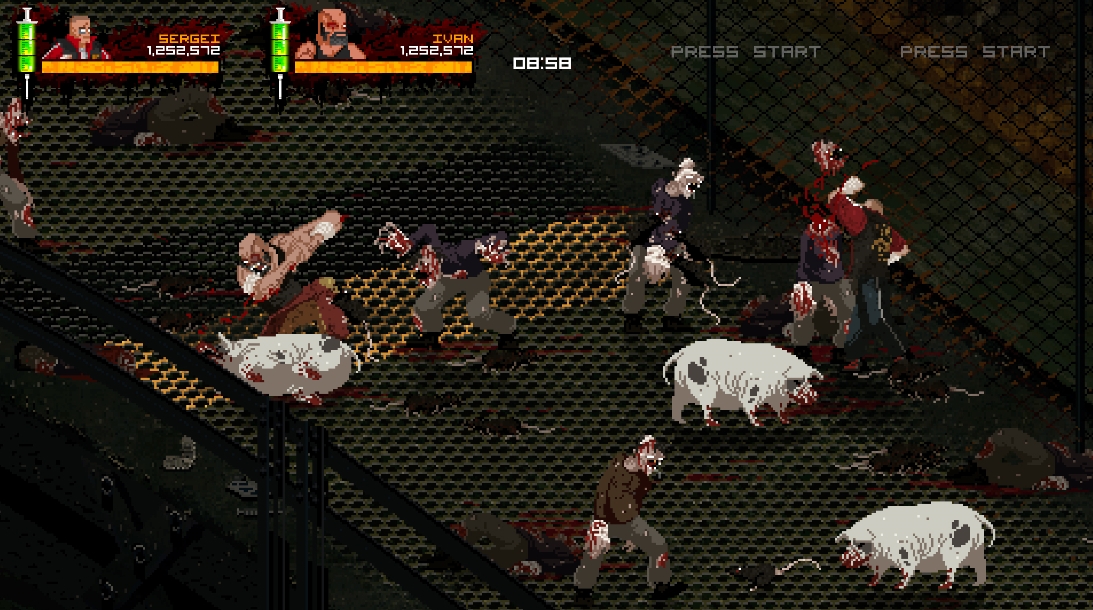 Like you’d expect from a typical beat ’em up, you can punch and kick, perform slide attacks and more. On top of that, you can use melee weapons, which is what I preferred using due to their extra punch. Mother Russia Bleeds, as is usually the case for other entries in the genre, is a bit repetitive and if you’re not prepared your thumbs will end up hurting. One of the things I liked about this one is how accessible it is since you can play with three human friends in co-op or with three bots, and if you prefer solo play, the bots are actually quite good. Playing with bots was great for me since they are intelligent and know what they’re doing, which can’t be said about most bots in other games. You also have infinite continues, so if you persevere, you will eventually get to the end. 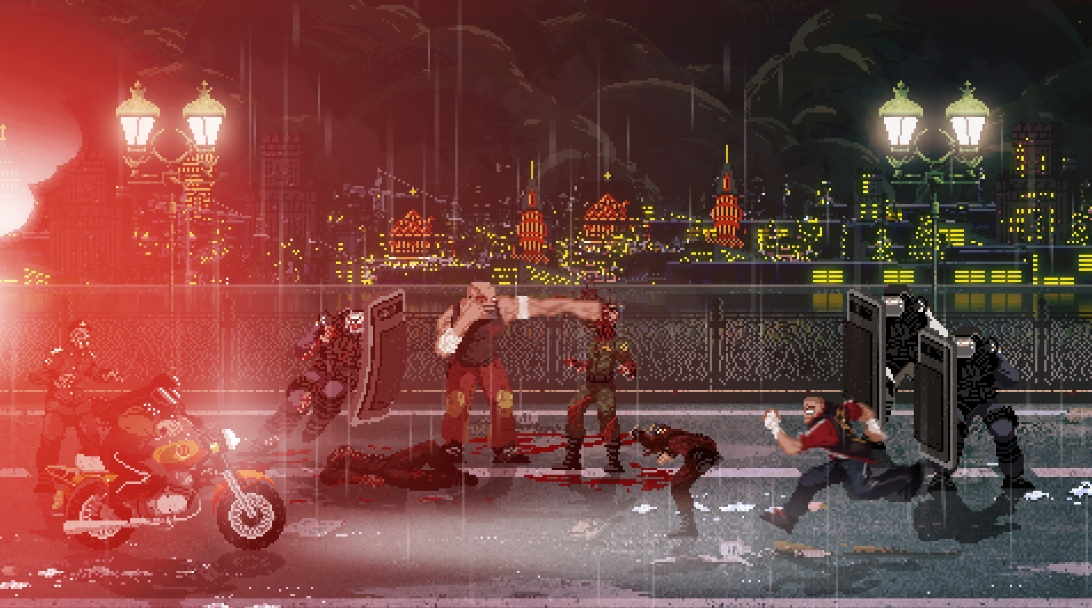 Mother Russia Bleeds is an extremely violent and tough game containing strong drug references, and that means this release is not for everyone. The game is now available on Nintendo Switch, so you can take it for a spin in Portable or Tabletop mode or play at home by docking the console for some fun solo or multiplayer sessions. Let us know what you think about this game in the comments below!

Disclaimer
This Mother Russia Bleeds Switch review is based on a PlayStation 4 copy provided by Devolver Digital.

Onimusha: Warlords Out On PlayStation 4