[Beyond PlayStation] Keep Talking and Nobody Explodes Review


For this local multiplayer game for two or more players, one player will take on the role of the bomb defuser who is, you guessed it, in charge of defusing the bomb. This needs to be done before the timer in the bomb runs out, or else things will go boom. The second player (as well as any other extra players on board) will act as a bomb expert and will be tasked with using the Bomb Defusal Manual to give the bomb defuser the input needed to take care of each of the modules on a bomb so that it can be neutralized before time runs up. 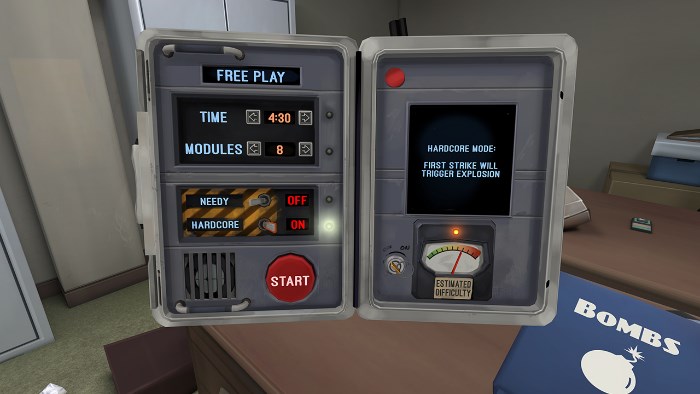 This all sounds very straight forward, right? Well, here comes the fun part: the bomb defuser won’t be able to look at the manual, and the bomb expert(s) won’t be looking at the bomb! The game was originally released for PC with virtual reality support, hence why the game is how it is in the first place. The fun for the Nintendo Switch version will come from how players interact and how they stop from cheating since where is the fun in doing things like that when the game has clearly been designed to play one way?

The Bomb Defusal Manual is, of course, available separately for free, and the bomb expert(s) can review it either online (at this handy link), or each bomb expert can print out a copy of the manual for some good old-fashioned “back in my day we had all the information printed out on paper, and we liked it!” action. Since you have to have the manual handy (either digitally or physically), the game will at first ask you to “unlock” your game in a special screen that mentions the Bomb Defusal Manual and its version, and that you need to enter the three digit code on its cover, so that the game can confirm that you’re using the right manual for the job. 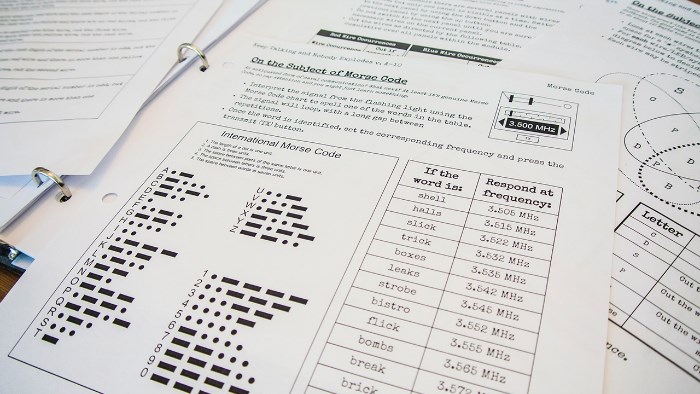 The gameplay for the player who is acting as the bomb defuser will ask that the object (the bomb) be rotated with the right analog stick to take a better look at it so that any relevant information can be given to the bomb expert player(s). Once everyone is working together to take care of a module, the left analog stick will be used to change between the available selectable options, which can then be selected with the B button or deselected (if this applies) by pressing the A button. The bomb expert(s) will use the Bomb Defusal Manual to use the information provided by the bomb defuser to provide the corresponding input so that each of the modules can be deactivated.


A bomb will have X number of modules to deactivate that need to be taken care of before time runs out, because if the timer reaches zero, then things will go boom bye-bye. Above the timer, there is a strike indicator that will mark how many strikes a bomb defuser has incurred because of mistakes while trying to defuse the bomb. As expected, it is three strikes, and you’re out, so be careful! Some bombs don’t even have a strike indicator, which means that you only get one strike before done for. 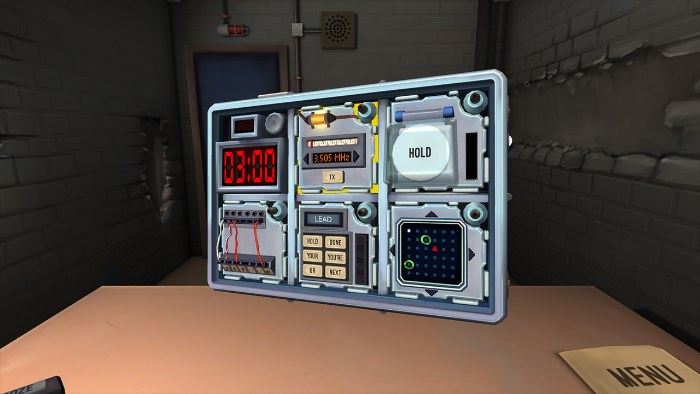 As for the information that the bomb defuser will need to provide to the bomb expert(s) who is(are) also very much playing the game, this could include things such as a serial number on the bomb, the number of wires in a module, the colors for said wires as well as the order in which they are presented, the color of a button and the text it has on it, the symbols found on smaller buttons (which are weird figure that will force the bomb defuser to say things such as “it looks like a smiley face with small eyes and its tongue out” if such a symbol is on display), to name a few of the examples. The more modules a bomb has, the trickier it becomes to defuse it before time runs out!

And on top of those modules, there are also needy modules you need to take care of. They’re called needy modules because they cannot be deactivated like you can with regular modules. They have a two-digit timer at the top center of said module, and they need to be tended to every now and then to keep their countdown from reaching zero or else you will end up getting a strike, which could be bad news if one strike is what was keeping everyone still alive and well – if a bit stressed and nervous due to the bomb thing. 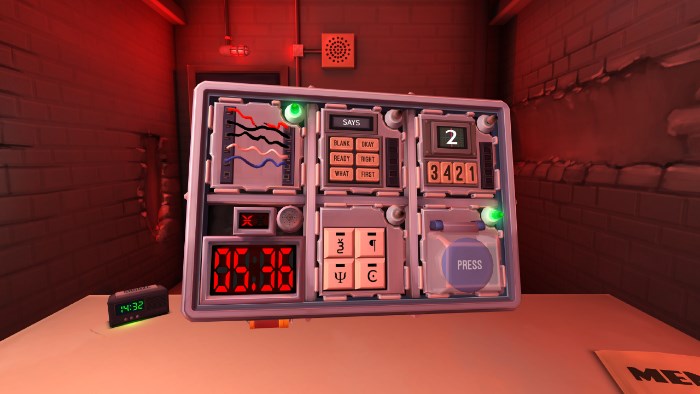 Keep Talking and Nobody Explodes is a different type of game that brings something new to the table on Nintendo Switch. Sure, the game has been available on PC for a while now (and on virtual reality consoles such as PlayStation VR), but odds are that when you bring out this game at your next party most of those in attendance won’t have played it before. The way one player is tasked with becoming the bomb defuser while everyone else acts as a bomb expert with a digital or physical manual, for a procedurally generated bomb with procedurally generated puzzles for its different types of modules means that you’re going to spend hours playing this one while having a different experience every time. Kudos to Steel Crate Games for coming up with this crazy concept that works great on Nintendo Switch!

Disclaimer
This Keep Talking, and Nobody Explodes review is based on a Nintendo Switch copy provided by Steel Crate Games.