Battle away against some new takes on iconic horror villains in this fighting game. I had a chance to try this when I was at EGLX 2018, so I definitely up for playing the full version. Learn more in our Omen of Sorrow review!

Omen of Sorrow is a classic 2D, four-button fighting game, with Unreal Engine 4-powered graphics, a cast of characters inspired by classical horror, fantasy and mythology, and a battle system designed from the ground up to leverage player skill, rather than stats or random chance, featuring deep combat mechanics that favor movement and spacing over tight execution to provide an engaging experience for pros and newcomers alike!

Using a netcode technique called rollback (GGPO), we’ll provide you with a near-lagless online experience. You’ll also be able to fight your friends in Local Multiplayer having someone in the same physical space when playing a game is a very different experience than playing with them over the Internet. You know that, and so do we

Omen of Sorrow is a new release from Aone Games, and it’s a 2D fighter that looks like Mortal Kombat but feels more similar to Street Fighter. The game’s big hook is that it features reimagined versions of classic monster characters. You have Adam, Frankenstein’s monster, Gabriel the angel, mummy Imhotep, hunchback Quasimodo, Dr. Hyde, and quite a few more rounding out the cast at eleven total. It’s a solid lineup for a new fighting game.

Each of the characters feels different and brings a unique feel to the game. Dr. Hyde is a slower moving character but can throw chemical concoctions and can change on the fly for different effects. Imhotep, the mummy, can stretch his limbs out and even separate his torso from his body, making him harder to hit. Quasimodo is a quicker gadget-focused character, while Thalessa the witch uses shadows wrapped around her as weapons. It’s a good and unique line up of characters that encourage you to learn all the basics before you start to specialize in each one. 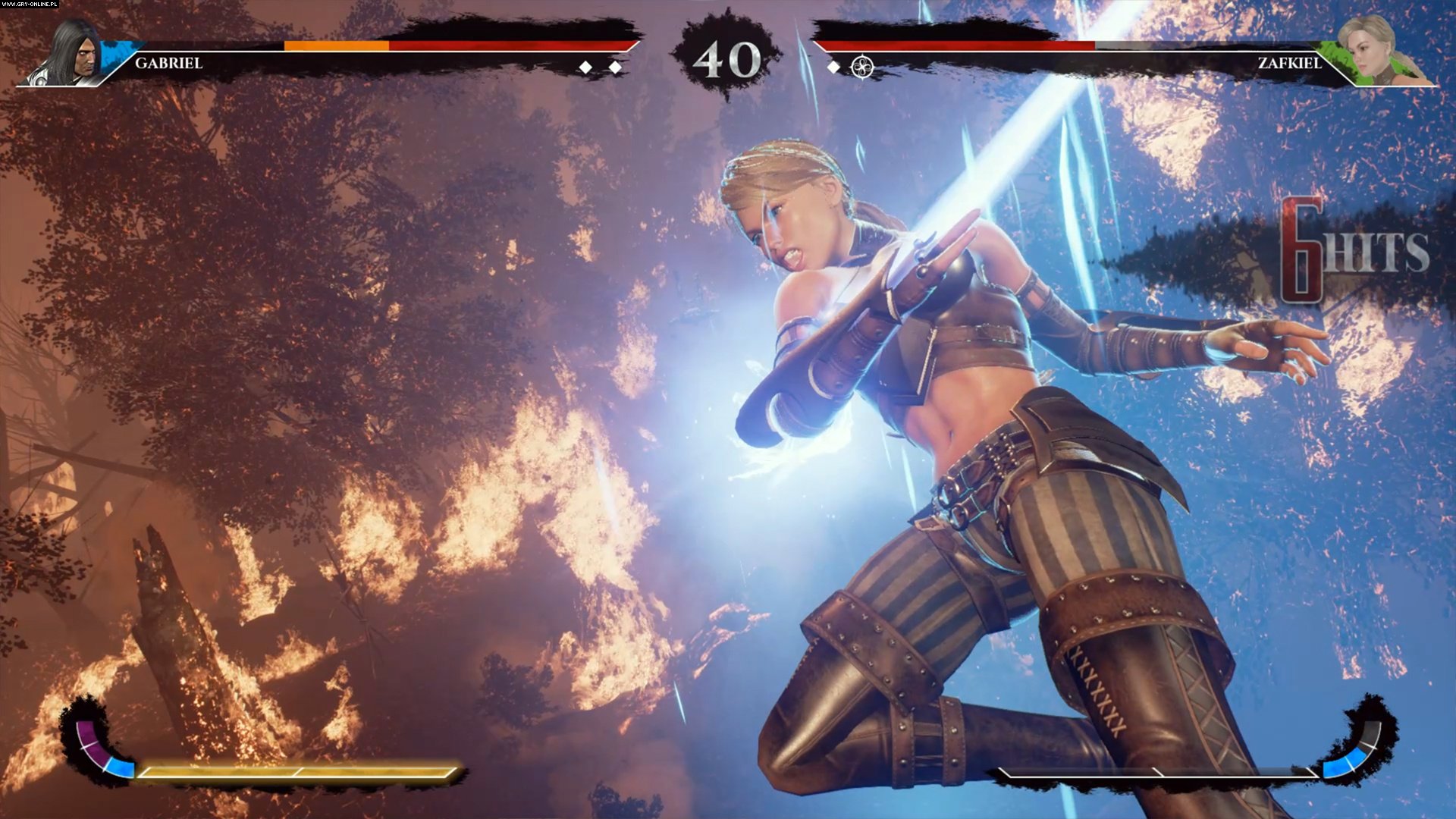 But how does it play? It’s a fighting game, so gameplay is sort of important, right? The game is a four-button fighter using the PS4 controller face buttons as Light and Heavy Punches and Kicks. You use the R1 button as your grab/throw button, so it will feel a bit more similar to Street Fighter as you will be using half and quarter circles to string special moves. This is where it gets cool though, as the game focuses on canceling special moves so that you can transition into other moves from your arsenal. You will see a quick prompt pop up a lot if you take advantage of the system. If you get good, you can chain multiple moves together creating some very cool combos.

You also build up a super move at the bottom of the screen when dealing or receiving damage. The meter has two sections, and each character will have an enhanced special move if you use one section or two sections to pull off your big special move. The other thing the game has is a fortune/fate system. You have a small blue and purple meter. Blue is fortune which you will get if you are doing well in a fight, giving you access to the cancels, while if you get beat up too much, it will be purple, putting you in a doomed state locking out your specials and other major moves. You will have to do a lot of defending until the effect wears off. 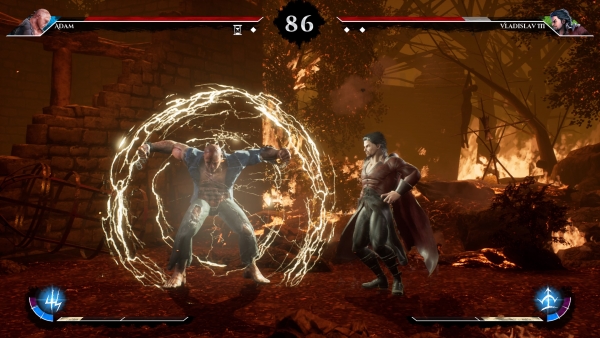 As far as fighting games go this one has all of the basic modes you’d expect, such as an Arcade mode, which has you traveling the countryside from battle to battle. The one I want to talk about is the Story mode. You can choose to play the story mode from three paths, with a few characters being available to play as the story progresses in each path. It plays similar to a NetherRealm title like Mortal Kombat or Injustice, as the point of view is constantly shifting between characters. Unlike the previously mentioned games though, the story is mostly told in unengaging text boxes as the characters speak with no voices. There is a narrator that does talk, but her voicework felt a bit bland. As much it was cool to have some backstory for the characters, it just seemed to fall flat overall and felt a tad lacking.

The models for the game look good with each character having a unique visual flair, offering an interesting take on the classic characters. Sometimes the animation can seem a bit stiff, so hopefully, this is something the team can work on. The music was supposed to give off a horror vibe creepy vibe, most of the time though it just felt there and not engaging. I did attempt to play online as the trailers made a point to discuss the netcode they were using, I struggled to find opponents more often than not with it timing out and no matchup for me. 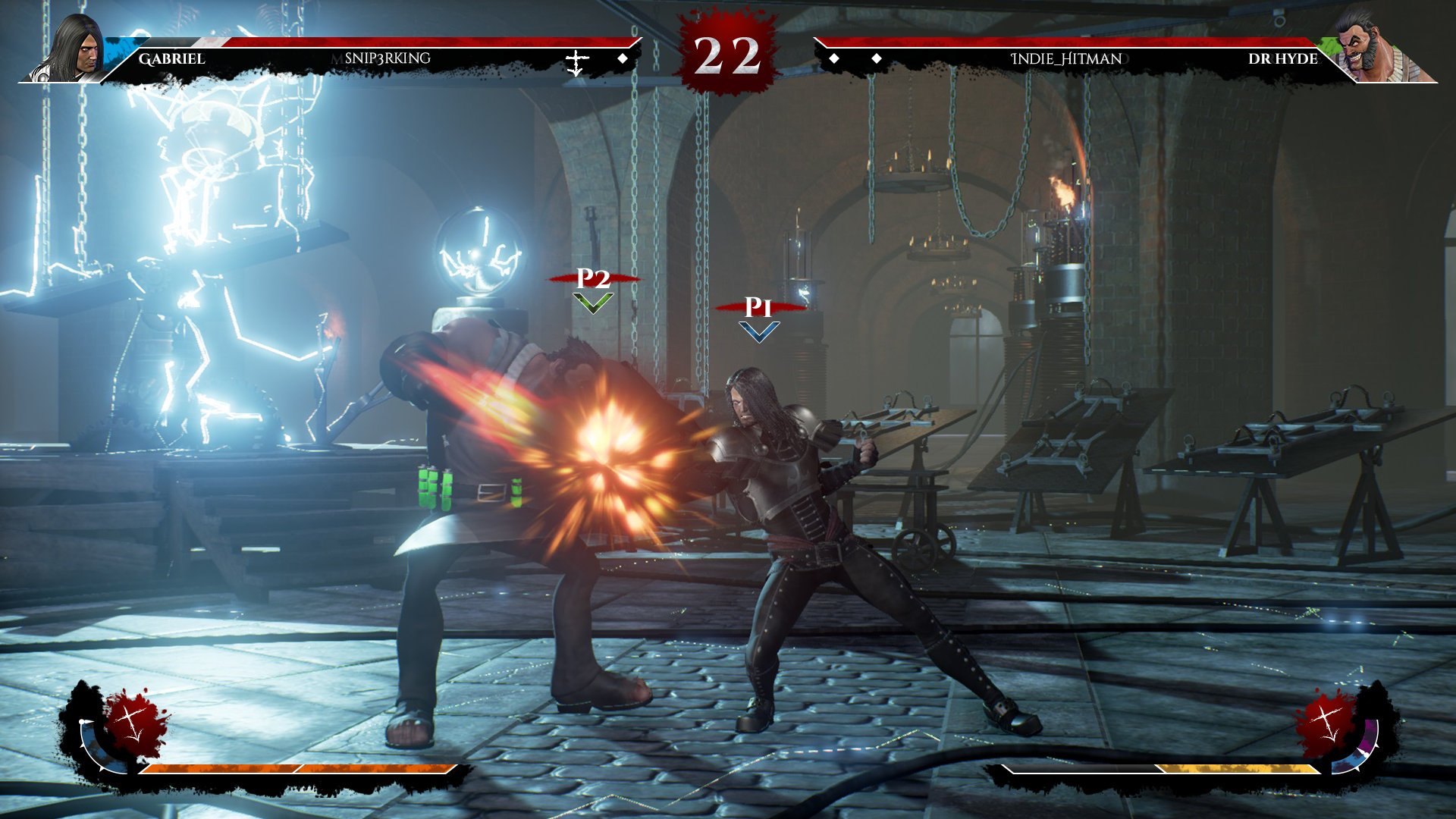 I liked a lot of what I played in Omen of Sorrow. I love the new takes on the characters pulled from literature and movies, and the combat felt good, especially the bold cancel systems. The animations felt a bit stiff though, and the story mode which I was most excited for, was a letdown. But if you’re looking for a new type of fighter that does something different, then you should definitely check this one out!

Disclaimer
This Omen of Sorrow review is based on a PlayStation 4 copy provided by AOne Games Spa.