Earth Defense Force 5 is the latest entry in the long-running series, and it brings us a new game instead of an up-port, as was the case for Earth Defense Force 4.1: The Shadow of New Despair which reimagines Earth Defense Force 2025, which was originally released for the PlayStation 3. This time around you are once again defending the planet from nasty aliens that have invaded, and it’s up to the Earth Defense Force to save humanity in the year 2022 before it is too late! Except that you’re actually a civilian that was trapped inside of base 228 when the invasion happened. Oh, and you’ll also be up against a new species called the Primer who are humanoid aliens that are definitely smarter than anything you’ve faced before. 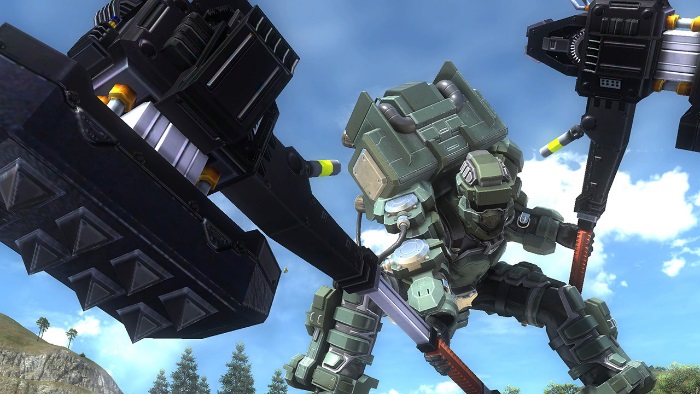 You can take on the game either in a single-player offline mode in which you gather items and strengthen your character as you clear each mission, or you can go at it in a two player local split-screen mode. There’s also a third option for an online mode in which up to four players can join in on the fun and work together to complete each mission. You should definitely start by playing the single-player offline mode so that you can get a feel of the basic gameplay mechanics as well as on how the game behaves on Sony’s home console.


Earth Defense Force 5 offers five difficulty settings so that players of all skill levels can get a chance to enjoy the game. You can select your soldier class and equipment, changing its color and adjusting its armor as you can to be able to increase its total hit points to boost your odds of surviving. There’s the Ranger which is a combat expert who can wield a wide variety of weapons while also making the most of the vehicles out on the battlefield. This is the most balanced class, so if you’re new to the series, be sure to pick this one. The Wing Diver is part of an all-female special class that fights by using a jetpack and energy-based weapons – it’s swift and deadly but has lower hit points than the others. 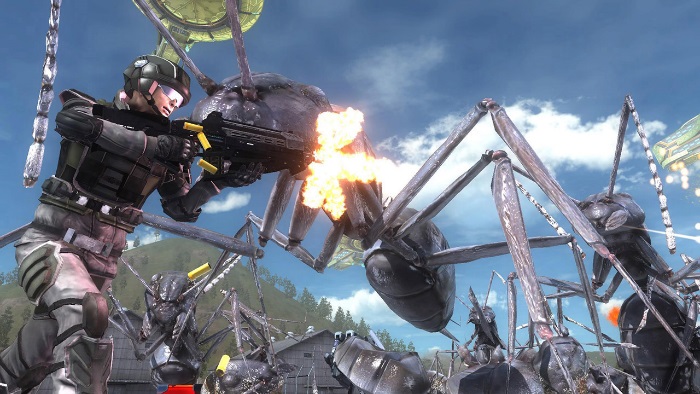 Then we have the Air Raider is a tactical soldier with a communications system which he can use to provide coordinates for air strikes, which means it can deal a lot of damage to enemies but has more of an assist role since it’s a high-risk Vs. high reward type of character – someone to select once you’ve learned more about the game. The final class is the Fencer who is a heavily armed soldier with a powerful exoskeleton, making it possible for him to equip the biggest weapons out there, not to mention it can use two weapons at the same time. It controls differently from the other three classes and is reserved for expert players who are up for learning some new techniques to maximize their damage potential.

Since you’re a civilian in this one, each of the classes will start out as an ordinary person with a sorta regular job, before “evolving” into the full class. This means that the Ranger will actually start as a Private Security Guard, while the Wind Diver will be a Sky Dancer – an entertainer if you will. The Air Raider will start as a Mechanic, which makes sense given the role of the Air Raider in a team. The final class, the Fencer, will begin as a very colorfully orange and yellow Freight Mover before turning into the deadly but challenging aforementioned Fencer. 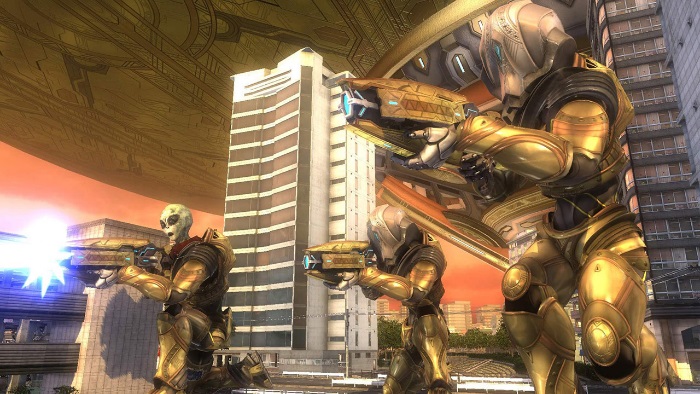 As you play, you need to pay attention to your Armor Gauge since it’s what indicates your overall health. You will see your current health, as well as the maximum health total, and if at any time your Armor Gauge reaches zero it will be game over – at least when playing in offline single-player. During local co-op multiplayer and online multiplayer sessions, the mission will continue until all player’s health drops down to zero. The game will provide you with a handy radar that will let you know the location of items, enemies and more. A red dot is an enemy, a blue one is an EDF soldier, a green one is an item, a yellow one is a vehicle, and a white one indicates civilians. During multiplayer sessions, a character’s class will also be displayed within the dot, with an R, W, A or F.

Something else to consider is your weapon indicators which will let you know what weapon you have currently equipped, the current ammo capacity, as well as the maximum ammo capacity. Once your ammo runs out, the weapon will be reloaded automatically, and you won’t be able to attack while it reloads, so you’ll need to plan for this or else you will end up leaving yourself wide open to the attacks of your enemies. Since enemies are small, medium, large and plentiful in each of the game’s missions, not planning for a reload can be deadly. 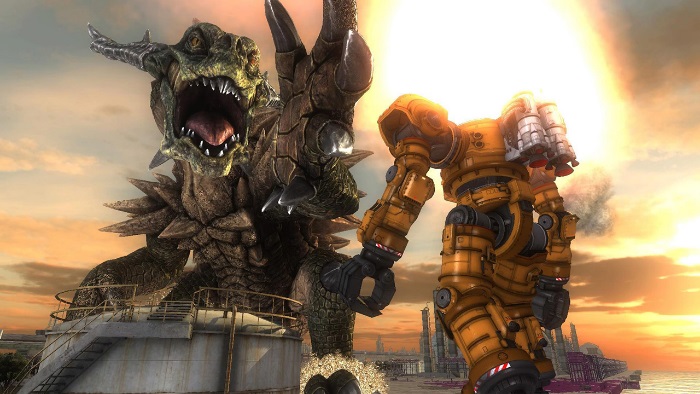 As you fight the deadly enemies in the game, you might end up being bitten and lifted from the ground by, say, a giant ant-like creature. While you are in its grasp, you will receive considerable damage and won’t be able to break away from its attack… unless you make the most of your weapons and aim at the enemy to try and damage it enough to force it to let you go. You can even switch weapons while you’re being bitten, so if you have a more powerful weapon at your disposal, you better put it to good use!

Enemies sometimes drop items when you defeat them, so you should always keep an eye for them so that you can make the most of them. You can get an armor pickup to increase your characters maximum armor (health) once you finish a mission, or a weapon pickup to grab a new weapon once you finish a mission – and the harder the mission, the more powerful the weapon you will find. There are also healing items that can help you recover 15% (small) or 30% (medium) of your Armor Gauge so that you can keep going. 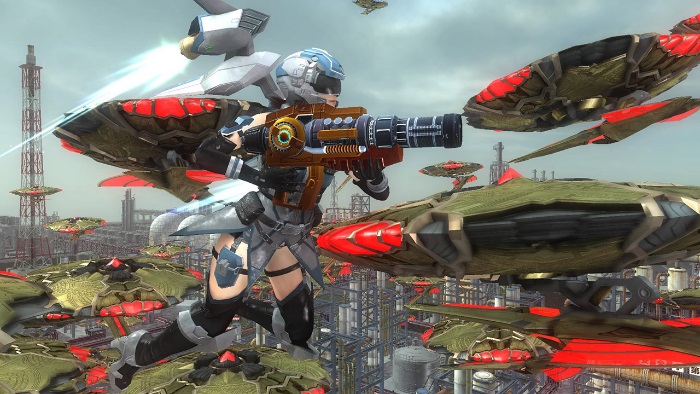 The weapons you obtain can also be enhanced by using duplicate copies of the same weapon, as long as the duplicate is of a higher level than the one you already have. If you keep obtaining the same weapons over and over again, you can increase its stats to up its overall capacity, damage, reload time, firing range, shot speed, accuracy, and ROF. Making the most of these enhancements while also joining the EDF ally squads in the battlefield will allow you to survive and succeed in each mission. You can also recruit soldiers to your cause if they have a Team-Up icon over their heads. The soldiers under your command can also be healed if you get a healing pickup.


The game features a full trophy list with a Platinum trophy, and what is very interesting is that 32 (yes, I did just write thirty-two) of the game’s trophies are related with advancing in the game’s Story Mode and reaching specific completion milestones for the overall mode. At first, the percentage requirements for each subsequent trophy are set at 5% intervals, but once you reach 60% completion, the trophies will start to unlock with very extra 2% you advance in Story Mode. As for the rest of the trophies, they are awarded for increasing the overall Armor (health) of each of the four classes to specific milestones, while the remaining three trophies are for rescuing five other players in co-op, rescuing 50 other players in co-op, and for healing another player in co-op. This means that the Platinum trophy is very much attainable since you can play in easy. 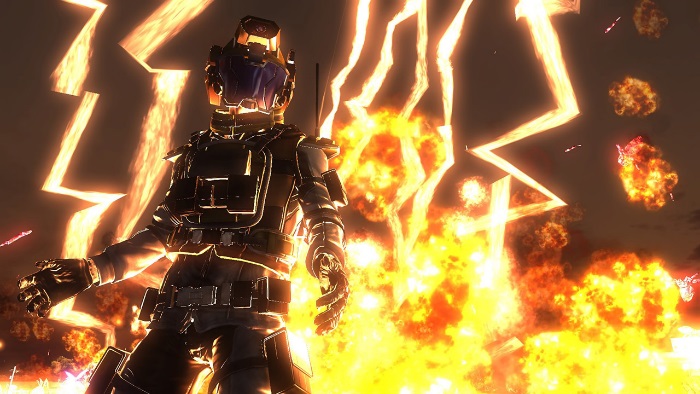 If you’re looking for an action-packed third-person PS4 release, then this is what Earth Defense Force 5 is going to give to you. If you’re a fan of the franchise, then you’re going to love the game. The only con I could find is that the game does look a bit “late PS3 game ported to PS4” when you play, and that sometimes due to all the action on the screen, that the game’s textures sometimes don’t load into action right away, but, in my case, other than giving me a small chuckle here and here, it didn’t get in the way of my enjoyment of the game.

Disclaimer
This Earth Defense Force 5 review is based on a PS4 copy provided by D3 Publisher.