Initially released last year on the Switch, Floor Kids is finally hitting PS4. Find out if the break-dancing game is worthy of your time in our Floor Kids review!


Floor Kids is an original idea by Montreal-based animator and former bboy JonJon. The Floor Kids first appeared in a series of short animated films produced in 2007-2008, featuring original music by Kid Koala, which was shown online and was incorporated in numerous Kid Koala’s live concerts. In 2014, JonJon and Kid Koala joined together with Envision and Hololabs to create a video game based on the Floor Kids characters and universe. The team set out to develop a unique break dance video game featuring 2D hand-drawn characters and innovative controls that make you feel like you’re dancing along with the character, all to the sounds of Kid Koala’s awesome beats.

There’s a bit of narrative story to the game, that tells about dance warriors and that you must explore the city to become the ultimate dancing force. The game starts off with only one location unlocked, but as you progress more will be available for you to breakdance. Each time you go to a location you haven’t visited before, the “story” about this place is given to you in some nice comics style frames and some dialogues. But to be honest, the “story” is not what you’ll be looking for in this game… it’s the breakdancing!

First things first, the game starts by having you choose your bboy or bgirl, from a choice of eight characters, each with his/her own strength and weaknesses. After you’ve done your choice, the others will be locked from usage until you can unlock them (more on that later). Then you’re taken to a brief yet good tutorial on the gameplay mechanics. 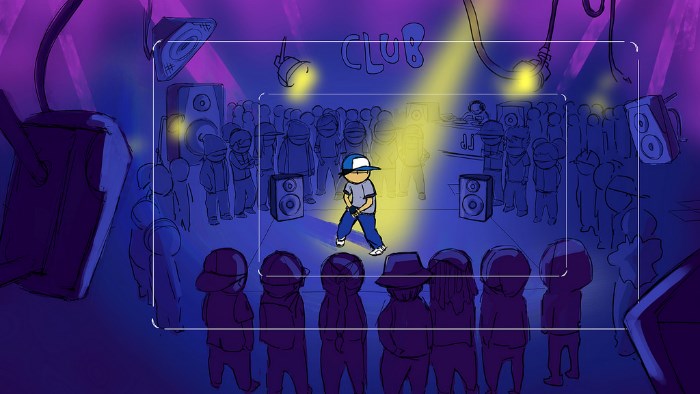 There are four types of moves in the game: top rock, down rock, power, and freeze. Top and down rock are the classic bboy moves and are down with any of the four face buttons. To switch to and from each other, you only have to press down when you’re in top rock to go in down rock, and vice versa to get back up. Power moves are done by spinning your left stick, thus creating moves where your character spins on their back, head, or just about any body part they can spin on! Finally, the freeze moves are when your character stops, in handstand position for example, and are done by holding one of the face buttons with the corresponding direction on the left stick (square with left for example).

From there, you’re good to go with the basics, and you can venture to the first unlocked location in the city for the three first tracks! There are other moves you can do, like hopping when in a freeze move, but those are not explained in the tutorial, you’ll have to look around the controls menu in the options to find them out. Each track you play is laid out in four parts. The first and third one are the freestyle parts, where you tap the buttons to the beat to create dance moves, and the other two parts are the chorus sections, where you have to press the X button at specific moments to match what you see on screen (à la Rock Band). 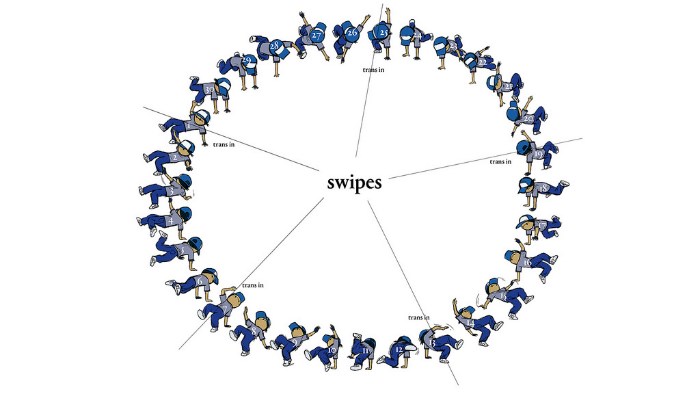 At the end of each song, you’ll be judged on different aspects which are funk, flavor, flow, fire, and flyness. Depending on your rating in them, you’ll earn a certain number of crowns on the track, up to a maximum of five. With at least three crowns, you’ll earn a dancer card, that once you have the four dancer cards of a dancer, you’ll unlock him or her to play with.


The soundtrack for the game has been completely done by none other than Kid Koala, a famous DJ / turntablist, and this is easily one of the strongest aspects of the game. The tracks are a bit repetitive from time to times, but in that genre, Kid Koala is one of the best around, so it’s a great pleasure to listen to while playing the game. And to match that, the cartoon-esque visuals made by JonJon are simply awesome, looking like they were hand-drawn right on your screen!

Normally, music rhythm games are mostly about always hitting the right buttons at the right time, but Floor Kids is different. You’re choosing what you do, how you do and when you do it, to create your own moves through the songs. And that was a whole lot of fun !! Not that you can just go button mashing your way to the crowns though, you have to be careful not to fall, vary your moves, listen to the crowd’s requests, so there’s a lot to take into consideration while playing, making for a simple yet tricky experience to play. 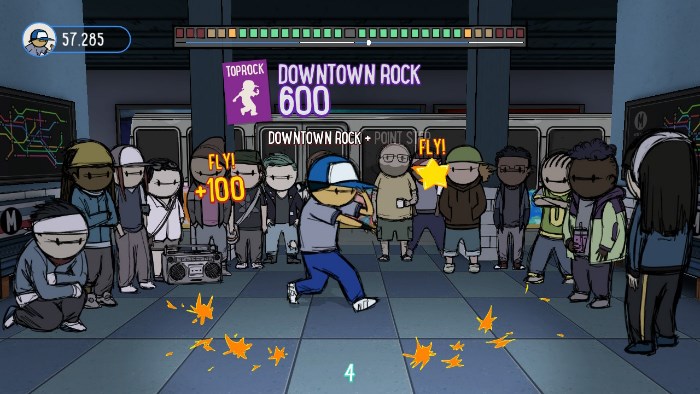 With a soundtrack as good as this one, it would’ve been really difficult not to enjoy the game, especially with how fun the gameplay is. I would’ve liked a bit more tutorials for the more advanced moves though, as nothing explains them, and the same thing goes for your score at the end of a song. You get scores on the different aspects, but nothing to guide you in making them better the next time.

As for the trophies, depending on your bboy skills, the platinum could prove to be a challenge. There are a couple of specific trophies that are easy to take care of if you focus on them, but after that, you have to go and earn the five crowns on each and every level of the game. If you don’t have the beat in you, this is where things will get tricky.


Final Thoughts
Floor Kids is a truly fun and solid game to play, with some of the most original visuals around and an incredible soundtrack. If you’re good at that kind of game though, you might find the $20 price to be a bit stiff considering you’re getting around 3-4 hours of gameplay to get through all the songs. If you’re into bboy stuff, turntablism or rhythm games, it’s definitely one to play

Disclaimer
This Floor Kids review is based on a PlayStation 4 copy provided by HoloLabs.

Monster Boy and the Cursed Kingdom Out Tomorrow