The SEGA AGES series has one goal in particular: to give us the best version possible of many of Sega’s classics from ages past. Thanks to the hard work of the team at M2, who are masters at working their magic into beloved classics from Sega’s hardware eras, we’re getting what could be called the definitive version of Sonic’s triumphant debut so that a new generation, as well as those of us who played the game back in the day, can play this fun and fast-paced game at home or on the go with a bunch of extras – which we’ll discuss in a bit.

To kick things off, Sega has given us Sonic the Hedgehog (as well as Lightening Force: Quest for the Darkstar, which you’ll be able to read more about later this week), the game that everyone thinks about when they remember the Sega Genesis (known as the Megadrive outside of North America). If you haven’t played the game, or have never heard about it, this is a fast-paced 2D action platformer in which you take on the role of the titular Sonic the Hedgehog who must use his superspeed to avoid the many hazards and enemies in his path as he frees the that have been imprisoned inside of the robotic enemies by Dr. Robotnik (known as Dr. Eggman in Japan). Dr. Robotnik is also set on stealing the Chaos Emeralds, which is a very bad thing, so you must try and collect them before he gets his hands on them. 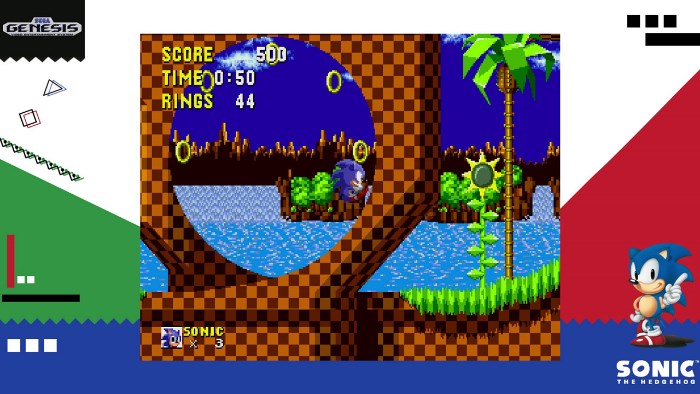 The game was originally released in mid-1991, over 27 years ago, back when Nintendo and Sony were rivals trying to get to number one in the so-called “console wars,” after Nintendo had ruled supreme during the NES generation. Many years later Sega exited the hardware business after the Saturn (and the 32X Frankensteins experiment before it) didn’t manage to good enough, which eventually doomed the most excellent Dreamcast – a console I own and which I still hold in high esteem to this day. After this, Sonic the Hedgehog was ported to a ton of Nintendo platforms including the Game Boy Advance, the Nintendo Wii, the Nintendo 3DS, the Nintendo Wii U, and now the Nintendo Switch.

Gameplay therefore revolves around you guiding Sonic through each of the game’s stages (and the acts within each stage), as he runs and jumps all over the place, running up loops, rolling into a ball to go down slippery tunnels, while you collect as many rings as possible. Rings are very important for several reasons. The first one is that Sonic can technically die in a single hit, but rings help to protect him so that he can take one hit before losing all rings, at which point a second hit will prove to be fatal. You can collect some of the rings that will come out flying of Sonic after he receives damage, and as long as you have one ring left you can carry on. Oh, and if you collect 100 rings you will be rewarded with an extra life. 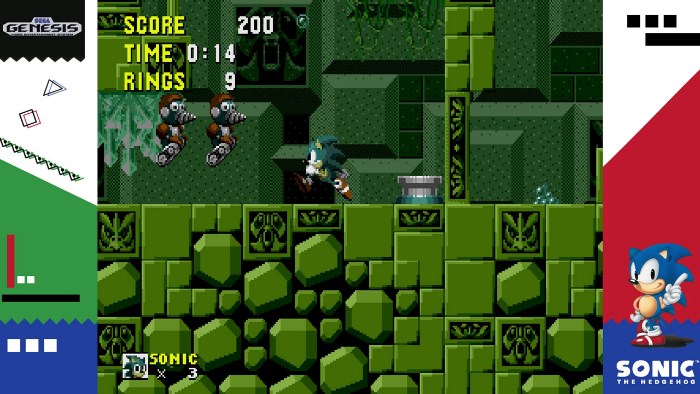 Another other reason for collecting rings is that if you can manage to obtain and carry with you 50+ rings by the time you reach the end of each act in the game, then you’ll see a giant golden ring floating over the end-of-stage sign. Jump into it and you will reach a special bonus stage in which you are curved up into a ball and must rotate around the screen as you are sent flying by bumpers, grasping towards walls that can allow you to roll around as you try to collect one of the chaos emeralds that are located inside of the bonus stage. There are some blocks that are marked with “Goal,” and if you hit any of them before collecting the chaos emerald, then the bonus stage will be over.


As you play each stage, you should keep an eye out for the square monitors that display a special item to help you on your adventure. You will need to jump on top or spin dash into a monitor to release the item it contains. These items include the Super Ring which increases your ring count by 10, the Shield which will protect you from one hit, or the Power Sneakers which allow you to run twice as fast for a limited time, to name some of examples.

After completing two acts of 2D platforming action, you will reach a third act for the stage that will lead you into a fight against Dr. Robotnik in one of his crazy robotic contraptions. You will need to pay attention to Dr. Robotnik during each boss fight so that you can learn what its movement and attack patterns are so that you can make the most of the windows of opportunity you will get to attack the round-shaped villain so that you can destroy its robotic machine so that you can carry on to the next area. 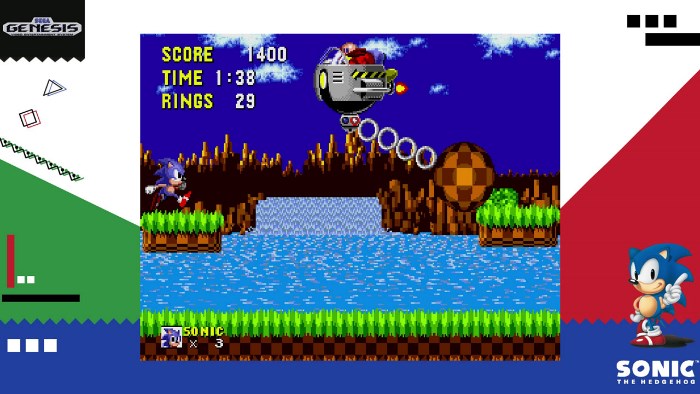 And now, let’s talk about what is new on the Nintendo Switch version of Sonic the Hedgehog. This SEGA AGES versions give us access to the Mega Play mode which was previously only available in the arcade version of the game. This mode changes things around by introducing a shorter time limit for each zone, having fewer overall zones to complete, and you don’t get extra lives based on your ring count and score – and since it’s an arcade mode, you will need to press the X button to add a coin to keep playing.

There is also a Time Attack ranking mode that is set for players to try and get the fastest time possible on Green Hill Zone Act I. As the name suggests, the goal is to play Green Hill Zone Act I as you try and beat it as fast as possible to get a new record time that can be registered (along with the replay data if it’s one of the top rankings) to the ranking server. By focusing on a single act, you will start to find ways to cut down some valuable seconds here and there as you get into the groove and enter into a Zen-like time attack state of mind.


You can also use a stage select available so that you can dive into any stage and act you want to play. And you also have Ring Keep mode in which you always start with 10 rings when you begin a new run or when you lose and start a new life, not to mention it will also affect the number of rings you drop when you receive damage. The SEGA AGES version of the game also offers an online ranking leaderboard so that you can try and grab one of the top slots. And you can select to play either the Japanese or International version of the game. 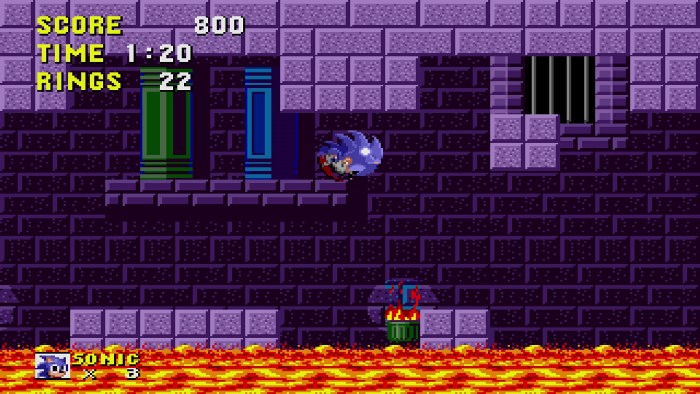 You can also pick one of the available wallpapers to be displayed in the back of the screen as you play, as well as the type of filter that will be applied for the game’s graphics. These options include a scan line filter, a smoothing filter, a scan line plus smoothing effect, as well as setting the screen itself to display to normal, fit, full, dot by dot (pixel perfect), or vintage – vintage will automatically set the look of the game to the scan line plus smoothing effect option.

You’ve probably either played Sonic the Hedgehog back when it released on the Sega Genenis/Megadrive, but you’ve never played a version quite like the one available in the SEGA AGES series. The inclusion of the Mega Play from the arcade version, as well as other things such as Ring Keep mode and an online ranking leaderboard make this the most complete and definitive version of this 2D classic.

Disclaimer
This SEGA AGES Sonic the Hedgehog review is based on a Nintendo Switch copy provided by Sega.