Even though the SEGA AGES version of Lightening Force: Quest for the Darkstar released on the same day as Sonic the Hedgehog, since Sonic was THE game for the Sega Genesis (Megadrive) back in the day, to me that was the first game in this great series, with Lightening Force: Quest for the Darkstar being the second one. And speaking of this series, my review for Phantasy Star will be going live next week, so be ready for that one as well!

Lightening Force: Quest for the Darkstar (known as Thunder Force IV outside of North America), is a 2D sidescrolling shoot ‘em up released in 1992 in Japan and in 1993 in North America and Europe. The game is easy to control since you move around with the left analog stick or the D-Pad, can shoot with the B button (press and holding it down for rapid fire), select your weapon with the A button and change your speed as needed with the Y button – something that certainly sets this one apart from other entries in the genre (pressing the button increases speed by 25% increments, but hold the button down and the speed will go up in increments of 1%). If you finish the game once you will gain access to the STYX from Thunder Force III, for which you can press the R button to increase its rotation speed. 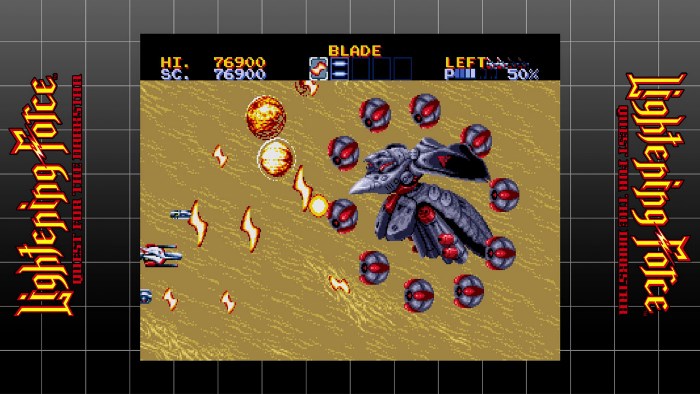 The game is split into two sections. For the first section of the game, you have four areas you can take on in any order you select. Once you’ve finished all four areas, you will be prompted to continue into the second section of the game, during which the order in which you will take on the remaining areas will be fixed. You will run into weapon-carrying enemy units as you play, and destroying them will give you access to weapon items that will increase your power. Since this is an old-school game, if you’re hit by enemy fire or collide with an enemy or an obstacle, then you will lose a life. Lose all your lives, and it is game over. If this happens, you can continue from the last stage you played by pressing the X button.


The default weapons for the RYNEX spaceship are the Twin Shot, which shoots out two bursts of energy, and the Backshot, which shots one forward and backward. You can also gain access to the Blade which increases turns the Twin Shot into spinning blades that can make short work of your opponents. There is also the Railgun which is a photon energy version of the back shot that shoots out powerful lasers. You also have the Snake which releases explosive charges, the Free Way which releases missiles in five directions, the Claw which unleashes remove units that move around your ship serving as a shield, and the Shield which gives you a self-generating energy barrier to protect you from enemy fire. There is also the Thunder Sword, a very powerful weapon that can unleash a massive burst of energy, which can be found in the second section of the game. 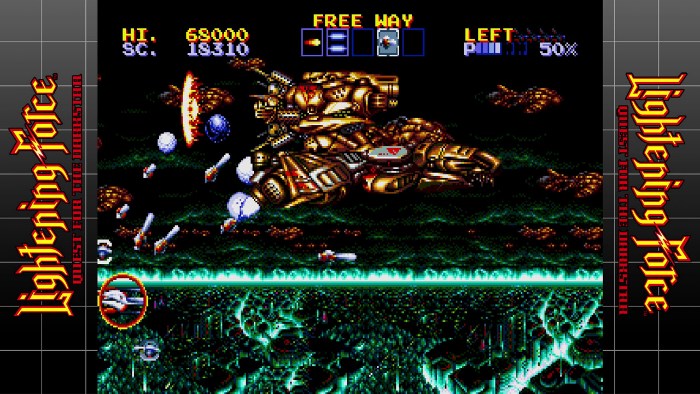 If you want to mix things up a bit, you can press the A and X buttons at the same time while in the title screen so that you can enter Configuration Mode. What this does is give you access to a special menu in which you can select the initial engine setting for your ship, the overall level of difficulty, and how many ships you will start with for your adventure. And if you want to, you can also listen to all the music tracks, all sound effects, and all in-game voices.


For the SEGA AGES version, you can select to play the game either in Original Mode, or you can select the aptly named Kids Mode that features a lower difficulty as well as allowing you to keep the Claw and Shield even after you lose a life. You can also upload your score performance to the online ranking leaderboard to compare how you did when you take on the rest of the world. You can also select between playing the International version of the game or the Japan version, as well as playing the game in its original form or by selecting the Lighten Processing Delay option to remove the lag the game suffered from due to the limits of the original Genesis hardware. And as you play, you can press the + button to save your current in-game state in the up to 10 different available slots. 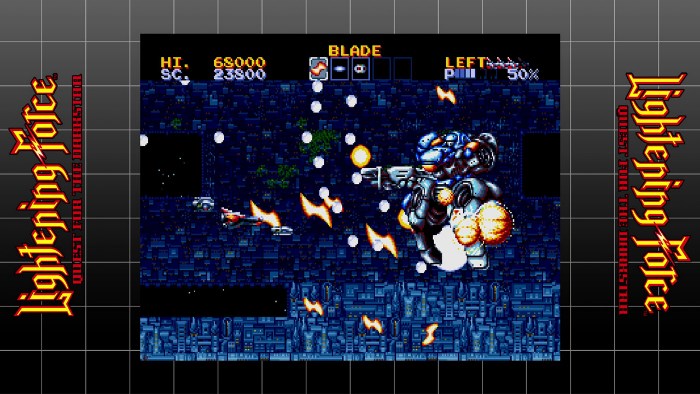 You also have access to the display options for the wallpaper that is presented in the back of the screen, as well as if you want the playing area to be set to normal, to fit, full screen, dot by dot or vintage. This can be combined with some extra display effects such as mimicking the scan lines display from ages past, a smoothing filter that makes everything, well, smoother, or a combination of the scan line and the smoothing. If you select the vintage display, then scan line plus smoothing will be selected automatically. The final option is for either making the background music stop (BGM) when in-game speech is reproduced or for playing BGM at the same time as the in-game speech.

Lightening Force: Quest for the Darkstar is still regarded as one of the best shoot ‘em ups of all time, and this SEGA AGES version gives us a solid port that can be played at home or on the go with a lot of extra stuff to mess around with so that you can play the game just like you want to. This is a must-have for fans of the genre, and a great option for both those who got to play it way back when as well as those new to it who are in for a treat. 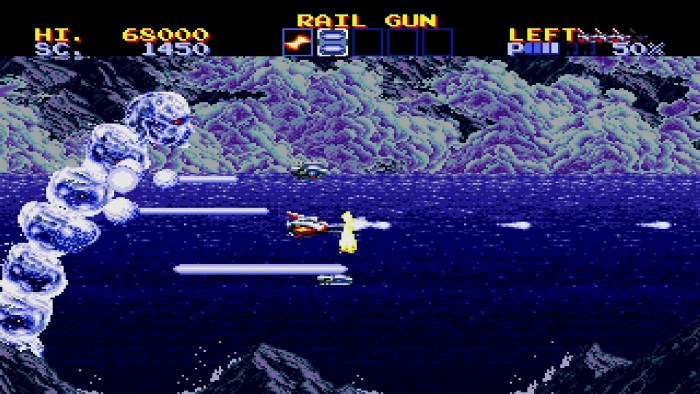 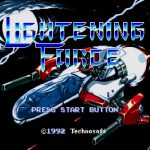 Disclaimer
This SEGA AGES Lightening Force: Quest for the Darkstar review is based on a Nintendo Switch copy provided by Sega.