For those that don’t know what a Sudoku is, let me break it down before diving into this specific game. The traditional Sudoku is played on a 9×9 grid, with a couple of digits here and there on the grid (the more there are, the easier the Sudoku will be). Your goal is pretty simple: fill the blank spots with numbers that range from 1 to 9 in order to have one of each number in each horizontal and vertical line, as well as in each of the sub 3×3 grids. 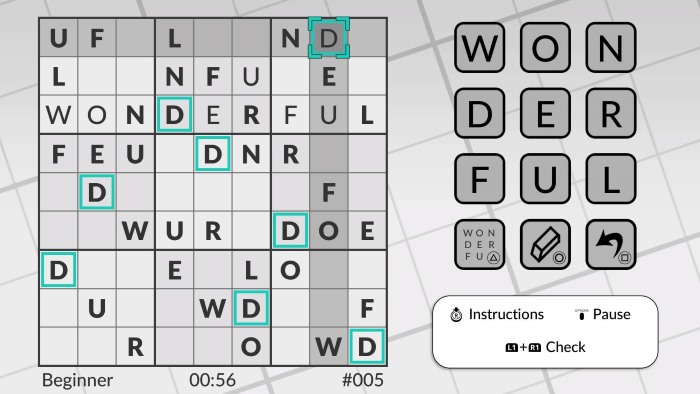 This game is basically the same premise, but instead of digits from 1 to 9, you’ll have to do it with nine letter words such as, say, the word “wonderful.” For those of you who are used to playing with digits, this might be a bit confusing at first, as you can’t think the same way as with numbers. And if you really don’t like the idea of doing it with words, or if you just got started doing Sudokus, there’s an option to switch to digits instead of the letters to make things a bit easier.

There are a lot of puzzles in the game, 240 puzzles in total to be precise. They’re broken down into five difficulties, which goes like this: 30 for Beginner, 30 for Easy, 60 for Medium, 60 for Hard and 60 for Fiendish. The first three difficulties are not that challenging, with hard offering a moderate challenge, while fiendish certainly does its name justice! Fear not about making some mistakes here and there since the game is a bit lax with these – maybe a bit too much. At any point in the game, you can check if there are errors by pressing L1 and R1, with no limit for the number of times you can do it. This is something I think should have been limited, but your opinion can certainly vary. 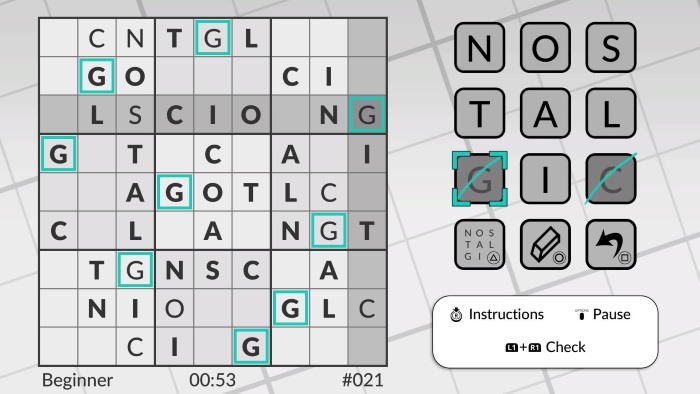 There isn’t much to say about the visuals of a Sudoku board, but what I can say is that I really liked how the controls worked when playing the game. Upon stopping on a spot where you want to put a letter, you just have to press the X button and then select the letter from the nine letters on the right side of the screen (in a 3×3 grid). It was easy to pick up on, and once you get going, you can quickly enter a Zen-like state of mind.

Sudoku is not for everyone, but I am definitely part of this game’s target demographic, and using words was a nice change compared to the “digits only” Sudoku I keep playing here and there on my phone. Since there are so many games like this available in the market though, I would’ve appreciated a bit more variety and reasons to come back. There could’ve been 16×16 grids, randomized Sudokus with digits, including daily challenges and leaderboards to go at them for the fastest time, etc. Once you’re done with the 240 puzzles, there isn’t any reason to come back to the game, but you really can’t fault the game for a lack of content since over 200 puzzles IS a lot of content. 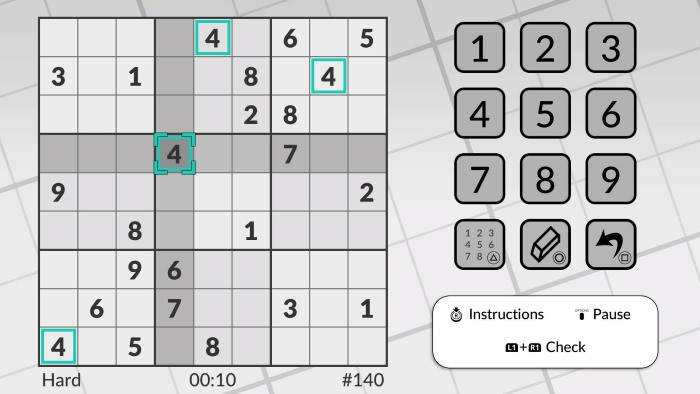 One thing’s for sure though, and it’s that this game can earn you two very easy Platinum trophies! The trophies are tied to completing 50 specific words, so once you’re done with all of them, you got yourself a shiny new platinum. As for the second platinum, all you have to do is dust off your PS Vita, download this cross-buy game, and do those 50 Sudoku puzzles again!


Final Thoughts
If you’re a fan of Sudoku puzzles, or if you’re looking into unlocking some easy and quirky Platinum trophies, then Word Sudoku by POWGI is a must-buy. How fast can you unlock your Platinum trophies? Let us know in the comments below!

Disclaimer
This Word Sudoku by POWGI review is based on a PlayStation 4 copy provided by Lightwood Games.