The SNK 40th Anniversary Collection brings together 14 titles on Nintendo Switch in a single download/cartridge. The collection is split between the arcade section where you can play the 14 included games as well as, for seven of them, their console ports – the console being the Nintendo Entertainment System (NES). The other section is the museum part of the collection, but I’ll talk about that in a bit. The games are what will at first draw many of you into this collection, so it’s only fair that I start with that.

The games included in the collection are Alpha Mission, Athena, Crystalis, Guerrilla War, Ikari Warriors, Ikari Warriors II: Victory Road, Ikari III: The Rescue, Iron Tank, P.O.W., Prehistoric Isle, Psycho Soldier, Street Smart, TNK III, and Vanguard. Some of the games are available as console releases, as arcade release, or as both, which means that we’re actually getting 20 games right from the start. On top of this, for each game (minus the arcade version of Athena which is a universal worldwide version) you can select between the US and the Japan version, which is definitely a big plus. 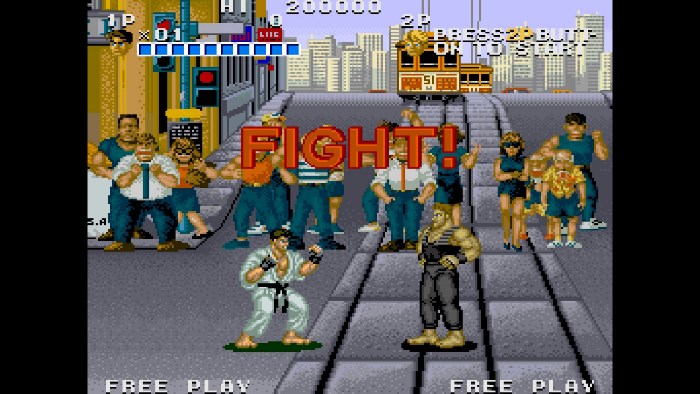 All games have two very interesting features that I want to discuss for a moment. The first one is the rewind feature which allows you to rewind time thanks to the L button, thus allowing you to change things after making a mistake as you go back to a moment in which you were very much alive and well. The other is that you can select a watch function that, as the name suggests, allows you to watch an expert run of a game which will certainly allow you to learn some new strategies for each game. The fun part is that you can, at any point, decide to take over the gameplay, making it more than a recorded run or an expert tutorial. How cool is that? 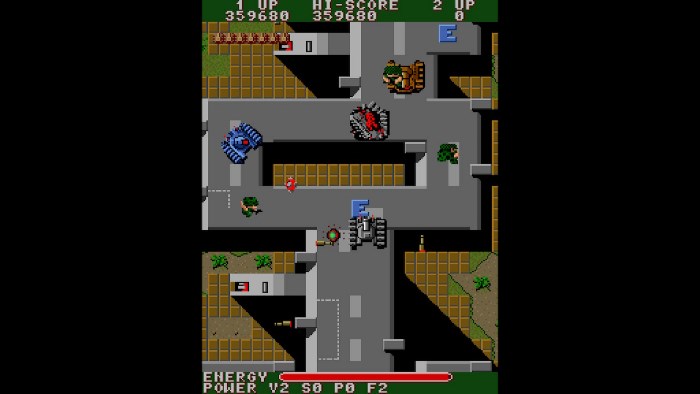 You can press the – button to check the options menu. Each game offers the option of showcasing a “Sharp Screen” version which offers a smaller virtual screen on the TV or the Nintendo Switch’s screen, but you can also zoom in and even stretch the display in full. There is also a TV filter and a monitor filter to apply to the image, or you can turn filters off entirely. The final option allows you to either keep or remove the border around the screen so that you can play just the way you want to. You can also check out the game’s control, including the reminder that the L button can activate the very handy rewind feature so that you can go back in time to fix your mistakes.


Now, let’s talk about the museum. Not happy with including faithful digital reproductions of arcade and console games from SNK’s past, the team has also given us a museum where we can check out the game soundtracks for all releases in the collection including, in some cases, UNUSED tracks! That’s right, for some of the games we’re not only getting the tracks used during gameplay, but also tracks that, for one or another reason, were not included in the final release. There are also bonus features including a look at the advertising for the games and the cabinets in the east and the west, a behind the scenes look at concept art, and a look at a “lost game” from SNK which was advertised to arcade operators but, unfortunately, never entered production. There are even digitized at a very nice resolution on which you can zoom in all the way. 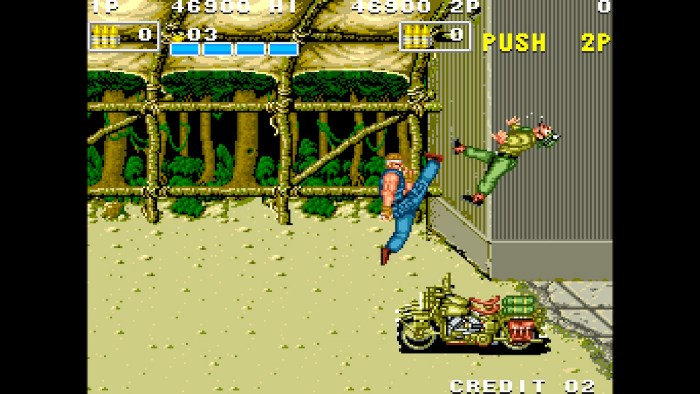 And then, there’s the SNK Complete Works 1978-1990 section which offers a detailed look at all the games that SNK released during that time period. Each game includes a look at advertisement used for the game, screens, as well as history lesson on what the game is all about. Over seventy (70!) games are represented here, from the Micon Kit, the first ever arcade release from Shin Nihon Kikaku, which was later known as SNK, to titles such as Atom Smasher, Fantasy, Marvin’s Maze, Main Event, Bermuda Triangle, Time Soldiers, Fighting Golf, Baseball Stars, and more. It’s a beefy and extended look at the SNK catalog and something that would justify the price of admission on its own.


All twin-stick games in the collection can be played either that way or by way of a “Single Stick” mode that allows players to use a single Joy-Con to move and aim at the same time, which makes it possible for two players to enjoy some fun local co-op with the two Joy-Con included with the Nintendo Switch instead of having to purchase a second pair. Mind you, playing with two Joy-Con per player is most certainly an option, but having an alternative to that when the base Joy-Con pair is all you have is a nice option. 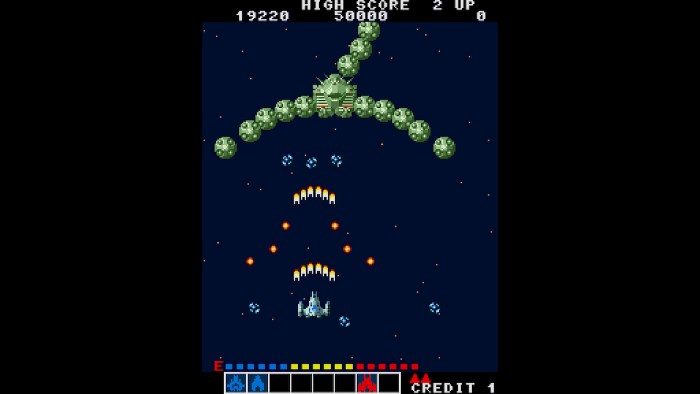 And as if the included 13 games in the collection, plus the console versions of some of them, was not enough bang for your buck, on December 11 another 11 titles will be added to the game at no cost. Nine of them will be added by way of a patch, while the other two (Beast Busters and SAR: Search and Rescue) will be made available in the Nintendo Eshop as a free DLC bundle. Why do it like this and not offer all 11 titles along with the one patch? Who knows! But you really can’t complain about 11 free extra games, right? 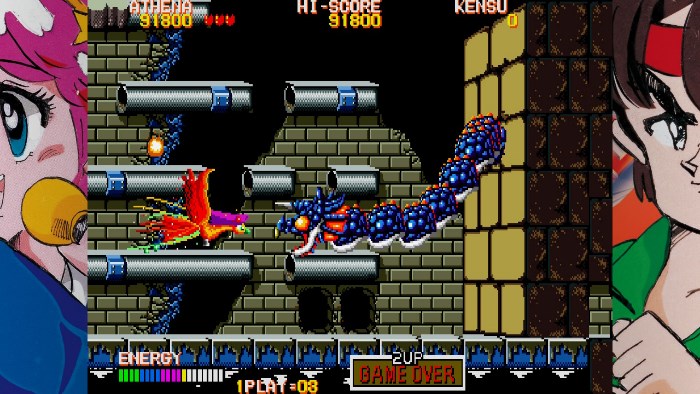 The options menu allows you to change the display mode from landscape to portrait to inverted portrait so that you can go for the look and feel of playing the games in the arcade back in the day. You can also review the available in-game achievements for the collection so that you can know what you need to aim for to get them – HINT: You need to finish fourteen of the base available games to get all of the achievements! 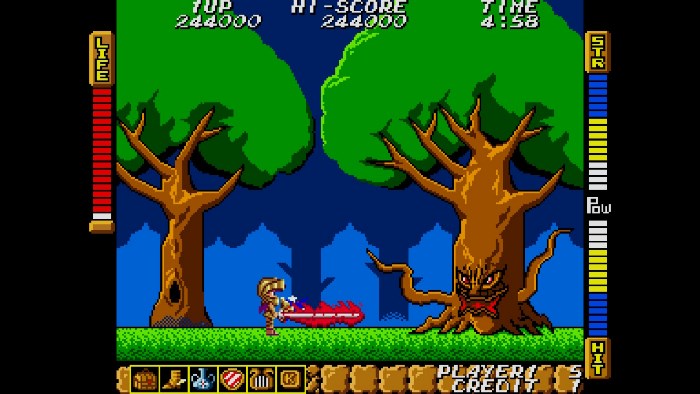 The SNK 40th Anniversary Collection is a must-have game on Nintendo Switch. Digital Eclipse, SNK, and NIS America have knocked this one out of the park, giving us an extended look at many of the classics that shaped up SNK during its early years. It does not feature every game, because that would require a ton of extra work and a way bigger development budget, but what is available, and what will be added on December 11, more than justify the asking price. After having a blast playing the games in this collection and marveling at the incredible museum section, I wouldn’t mind seeing a second and third volume! 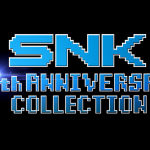