Hyper Sentinel from Four5Six Pixel and Huey Games is an old-school styled arcade shoot ‘em up on Nintendo Switch you have to try. Find out why in our Hyper Sentinel review!


Hyper Sentinel took Hypersentinel to Kickstarter last year, reaching its funding goal to bring the game to Steam, PS4 and other platforms. The team has now managed to release the game on the Nintendo Switch so that you can play it at home or on the go, making this the best version of the game! If you’re a fan of old-school overhead shoot ‘em ups, then you’re going to love this arcade take on the formula as you take on its 12 stages with three different difficulty settings and three gameplay modes! 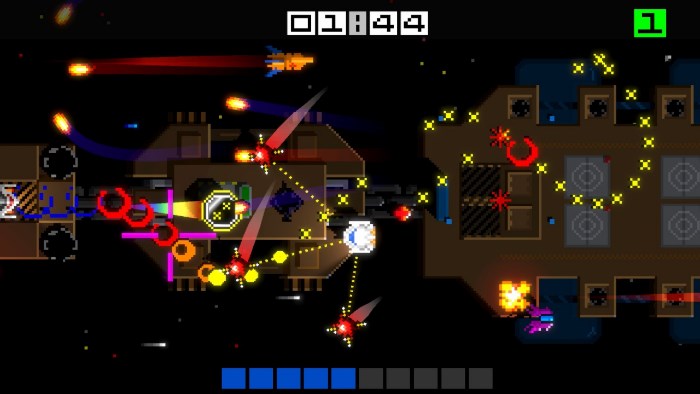 The game’s controls are simple, staying true to its arcade inspirations. You move your ship around with the left analog stick or the D-Pad and can shoot with the A or B button as needed. You can also boost with the ZR button for that extra shot of speed to get you out of tricky situations or to chase after a power-up that has managed to slip past your grasp. You might also want to use your boost to catch up with a boss that is trying to get away from you, especially when you’ve managed to grab some valuable extra weapons to do some considerable damage. As for the options, you can increase the music and sound FX levels, and can also change the game’s graphics from the standard display to a CRT display, to mimicking the look of the Spectrum and the C64. 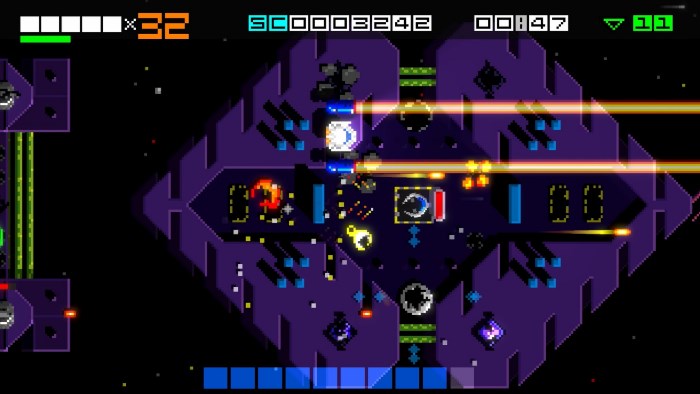 As for the power-ups you can collect, these include a variety of weapons that you can use for a set amount of time to deal considerable damage against enemies and bosses, a shield that protects you from all harm, an energy pack that will help you recover some of the health you’ve lost from colliding into enemies or from being hit by their attacks, a massive powerbomb that will destroy all enemies on the screen, and bonus points packs that will increase your overall score as you aim at getting a high score.


To complete a stage you will first need to destroy all ground targets in the level while also dealing with enemy spaceships, stationary but deadly turrets, and hangars that will send new enemies into the scene. Once you’ve managed to destroy all targets, the stage’s guardian (boss) will show up, and you’ll need to defeat it while also taking care of its minions so that you can finish your mission and destroy the vessel that is carrying what used to be your targets – it will explode as the Joy-Con HD Rumble away with the blasts. 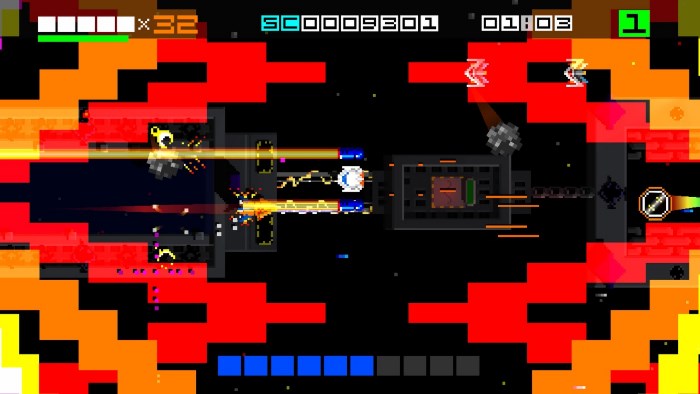 The game might only feature 12 stages, but each one can be played in one of three variants. The first version is the regular one that you can access by playing the game from start to finish. Finishing a stage will then unlock the extra pair of modes: survival and boss. For survival, you will be asked to survive in a stage for a set amount of time, and the longer you can survive the higher you will climb in that stage’s online leaderboard. Boss is, as expected, you taking on that stages boss right away, and for this mode, you’ll need to be as carefully fast as possible to get your name on the leaderboards.


There are also five medals to collect for each stage, which means that if you want to 100% the game, you’ll need to obtain all 60 medals. These are awarded for completing objectives such as destroying a set number of enemies while moving at full boost speed, scoring a set amount of points in a level, achieving the maximum 32x multiplier in a stage, or defeating the level’s boss under a set time limit, to name a few examples. 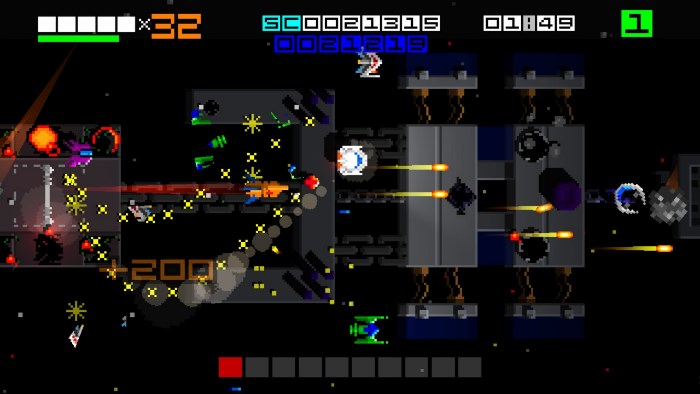 Hyper Sentinel is a fun arcade-style old-school infused pixeltastic release that is now on the Nintendo Switch. It’s $12.99 asking price might at first seem like a high number for a game that offers only 12 stages, but they’re fun set of stages that offer a lot of replay value with three different modes per stage, as well as five medals to collect, not to mention the fact the game has online leaderboards so that you can aim at getting your name in there.

Disclaimer
This Hyper Sentinel review is based on a Nintendo Switch copy provided by Huey Games.