If you’re looking for an old-school arcade game to play at home or on the go on Nintendo Switch, then this one certainly fits that bill. Come check out our Johnny Turbo’s Arcade: Express Raider review!


Express Raider was released back in 1986, something you can probably tell just from looking at the trailer above and the screens in this review. This one is a 2D action game in which you’ll need to steal the money from the express before it manages to get away. Your first task will be to defeat the banker that stands in your way so that you can catch the train before it leaves town. Once you do this, you’ll need to battle several enemies while on board the train. 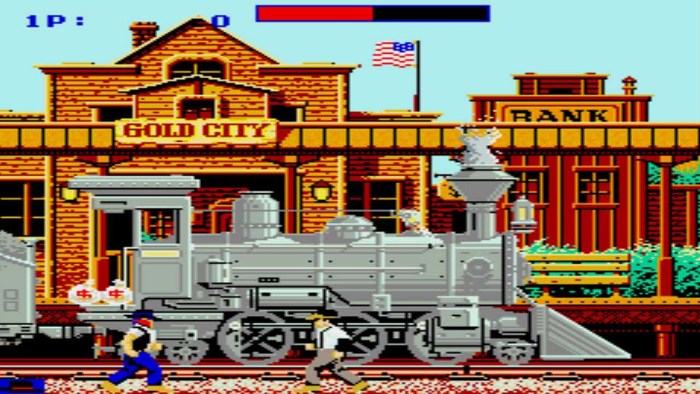 The game’s controls are simple and to the point, since you only need to worry about a couple of buttons. You’ll move around with the left analog stick or the D-Pad and can also jump by pressing up. You can punch with the A button and kick with the B button. When you’re riding your horse in the shooting sections, the A button turns into the button that you use to fire your weapon, while the B button is used for ducking so that you can try to avoid the deadly shots of the ones shooting at you from the train. 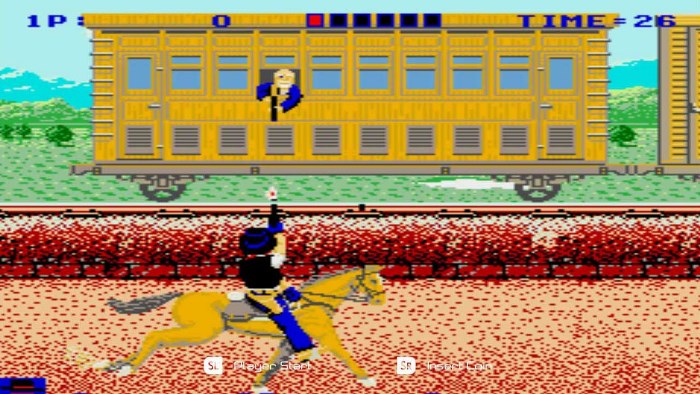 There is a big bar at the top center of the screen. This is the health bar, and for every fight you take on you’ll need to punch and kick your opponent so that the bar goes fully red, thus signaling its defeat. You will run into enemies that can also punch and kick you, as well as others who will throw bottles at you or use a heavy shovel to deal you some serious damage. As you fight, you will need to pay attention since if a big exclamation point shows up; it means you need to duck or else you’ll be hit by a large sign or a tunnel entrance, losing some of your health in the process. You also need to jump to the next car ASAP or else a bomb will go off, separating the car and killing you in the process.


Once you manage to obtain the moneybags on the final car of the train, you will alternate into a shooting sequence in which you’ll be riding a horse as you try to catch up to a train that is already in motion. As I mentioned before you’ll need to use the B button to duck out of harm’s way as you try and aim at enemies by pressing that button to hide as he prepares for payback onto those foolish enough to not understand that the pony express is ours. For the shooting sections, you’ll need to carefully aim since bullets need to actually hit enemies and not just go flying in their direction for a hit to register. 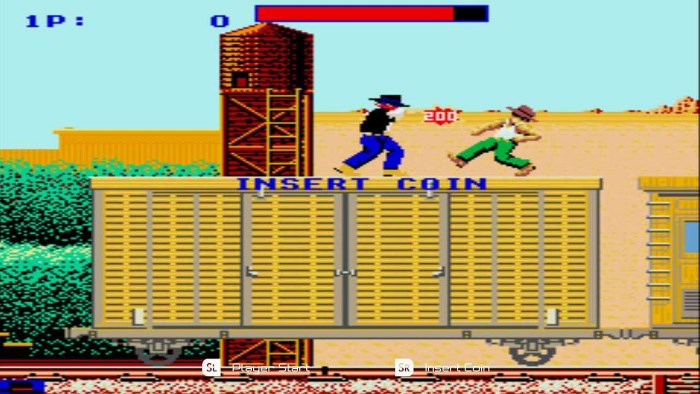 While you’re on the shooting gallery style levels, you’ll always be on a timer so you’ll need to act fast and try to be accurate with your gun. You need to defeat a set number of enemies in each part of the stage to be able to progress further down the train, and since one bullet hitting your character is all it takes to kill you, you’ll always need to be on the move. While in the shooting sections you’ll need to be extra careful since civilians will also pop out of the train’s windows every now and then and shooting them will also cost you a life. If you don’t shoot them, they will be grateful and will throw a bag of money your way. 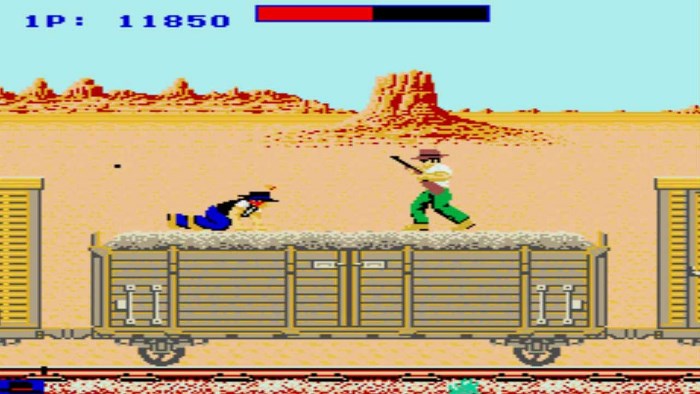 Express Raider is a game that is now over 30 years old, and I have to say it definitely shows. Unlike other arcade games from the era, this one has not aged as gracefully, offering a gameplay cycle that is not as enticing as the premise would have you think. Still, it’s a great arcade port on Nintendo Switch and a slice of gaming history that is worth a play or two. 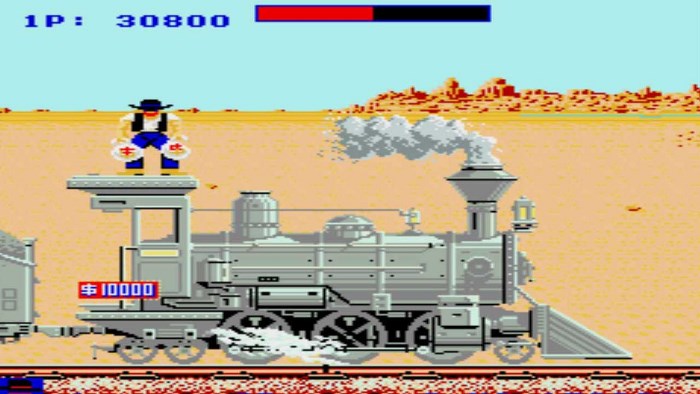 Disclaimer
This Johnny Turbo’s Arcade: Express Raider review is based on a Nintendo Switch copy provided by Flying Tiger Entertainment.