Nefarious is a very fun 2D action run and gun platformer in which you play as career criminal Crow. Learn more about it in our Nefarious review!


Tired of playing the hero? Nefarious is a 2D action platformer where you get to be the villain! Step into the wily shoes of Crow, an evil genius on an epic quest to steal princesses for his royalty-powered death ray – the world-conquering Doom Howitzer.

Wreak havoc across five different kingdoms! Stomp on heroes in iconic battles recreated with you as the boss! Unleash your inner megalomaniac!


This is a double review for the PS4 versions of Nefarious. The game was played on PS4 by the_nmac and Tracey. This review presents what they both had to say.

Starblade took Nefarious to Kickstarter way back in 2014, asking for a relatively low goal to develop a very interesting idea. The campaign managed to reach its main funding goal with only $331 to spare on top of the $50,000 it was asking for and did this very close to its deadline. This allowed the game to be developed and released on PC, and the PlayStation 4 was not in the cards. Luckily Digerati stepped in to help bring the game to Sony’s console, which is great for us because this one is a very fun 2D action platformer with some good gameplay twists! 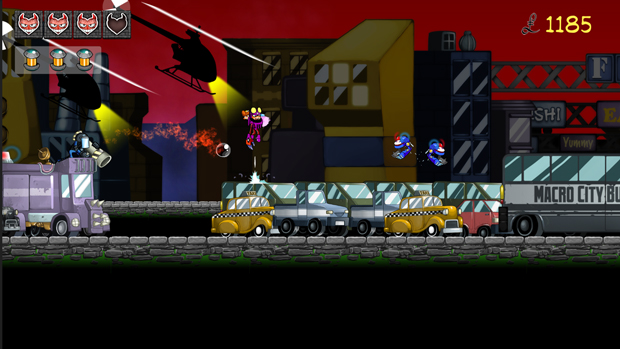 As mentioned before, you play as Crow who, yes, is indeed what you would call the bad guy. He has plans to take over the world, so he kidnaps Princess Mayapple for kicks and to terrorize the entire city – this is just step one since he plans to kidnap other princesses to slowly but surely conquer the world. That right there will certainly grab your attention since for most platformers you’re playing as the good guys, trying to save the world before it is too late.

There is no tutorial per se in the game, which means that the first level is going to act as the tutorial, showing you how the controls are mapped out, which button does what, and so on. It’s a great way of teaching players how to take on the game right from the start since it shows you what to do and then makes you do it. Crow has a big and powerful fist which he can use to smash everything around him, as well as a machine gun to use for long-range combat. If you need to reach a higher platform you’ll need to use the purple boxes that seem to have a bullet in the middle – getting close to one will blast you to a higher platform. You can even jump on more than one consecutively to be sent higher and higher! 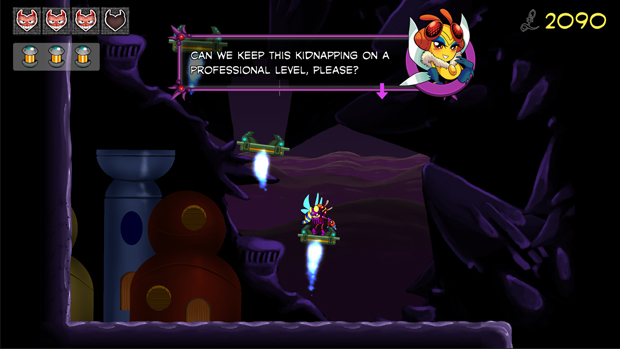 Levels are littered with collectible coins which you can use to purchase recovery items and to restart from your latest checkpoint, so as long as you have some coins on you, you will be able to avoid a game over. Checkpoints are very generous, so even if you’re defeated or you if miss a jump, you won’t be losing much progress. You can also use the coins for purchasing upgrades, or upgrade to a rocket punch, or being able to do three consecutive hits with your fist to deal some serious damage. You can also upgrade your guns, so be sure to check to see which works best for you!

In Nefarious, the bosses are surprisingly easy to defeat – at least that’s how I felt when playing the game! I was quite surprised since with most platformers I’ve played it’s usually during the boss fights when the difficulty ramps up considerably, but that is not the case for Nefarious. I’m not complaining about it, but it is something I thought I should mention since the boss fights, while easy, are very fun to take on. 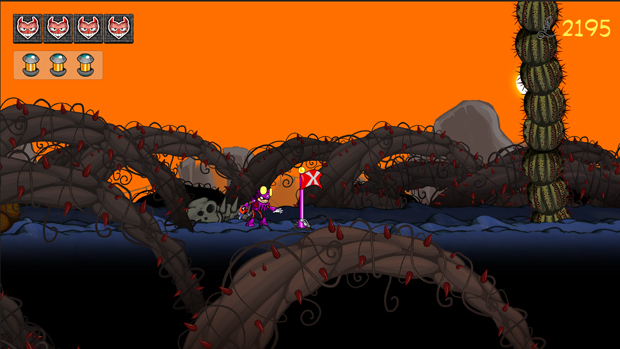 Nefarious is an interesting concept that puts you in the role of the video game bad guy! You kidnap princesses from kingdoms to use them to create the ultimate weapon: the Doom Howitzer. You need to infiltrate the kingdom, capture the princess, then get away with her in one piece. You know, right after you defeat the hero who is trying to save the princess in the first place!

The game is a platformer focusing on using punches to beat your enemies, and you also get a grenade launcher that will throw grenades at them as well – these are upgradeable with the treasure that you will find throughout your travels. Eventually, you will have rocket power, multi-punches and more at your disposal. You can also upgrade your life by adding more hearts to Crow, letting you stay alive in each level for longer. Getting these upgrades is essential to remaining healthy and unbroken. 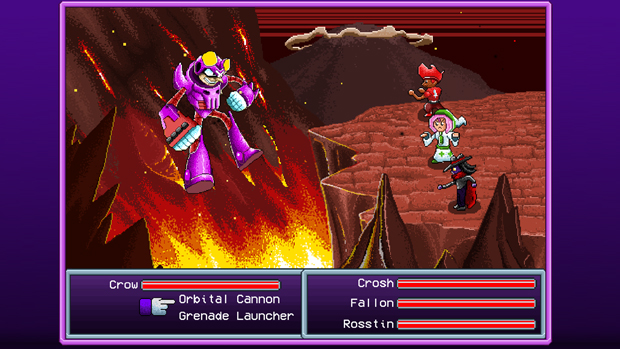 I really liked the structure and the gameplay loop. I found all of the worlds very creative in design and art very cool, and the goodguys fit each world’s themes very well, and they are more than just reskinned characters in each world, adding new danger to your adventure as well as some very funny moments.

My biggest issue, however, is the actual platforming mechanics. I found the controls to be very floaty, making you stay in the air for longer than you feel you should. This combined with the punching, which takes considerable time to “go” can make fighting air-based good guys very difficult. Also, since you are launching your grenades in arcs, in some levels, this does make hitting targets harder than it should be. Upgrades do help, eventually, especially the one that acts more like a straight gun and with the ability to aim in 360 degrees around you with the right stick.

I will say that, for the most part, the boss battles are a riot These put you on the spot as the prototypical bad guy, usually using large vehicles, and you need to destroy the main good guy for the world. Once you learn the gameplay mechanics for a fight, you can usually take the good guy down pretty easily. I wish the game was more focused on these situations and less on the platforming, but I guess that is what sequels are for! 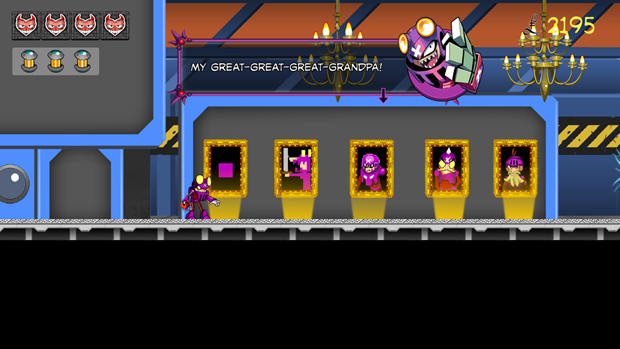 Nefarious is a fun 2D action platformer that does things differently by placing you in the shoes of the villain while introducing some interesting gameplay mechanics to spice things up. The game has some comical moments with clever one-liners, and as for replay value, there is no extra content to unlock and playthrough when you have completed the game, but you can go back to stages to try and collect all the crowns so that you can see an alternate ending. We had a blast playing this one, and we are definitely up for playing a sequel!
——————