After being kickstarted way back in 2014, Timespinner has finally traveled through time to land on the PS4. Are you ready for another retro-inspired Metroidvania? Come find out in our Timespinner review!


The story of Timespinner follows Lunais, of the Qaelans tribe, as she is about to become a Time Messenger. For many generations, the Time Messengers have had one purpose; travel back in time to warn their tribe about the Lachiem who want to destroy them. The only problem with this is that when traveling back, they join the tribe as a “new member,” but are erased from history, so there is no paradox. As we pick up on Lunais’ story, the Lachiem invade their village and end up killing her mother, forcing her at the same time to use the Timespinner to travel through time. From there, a thousand years before those events, she’ll set out on a quest for revenge to try to bring her family back. 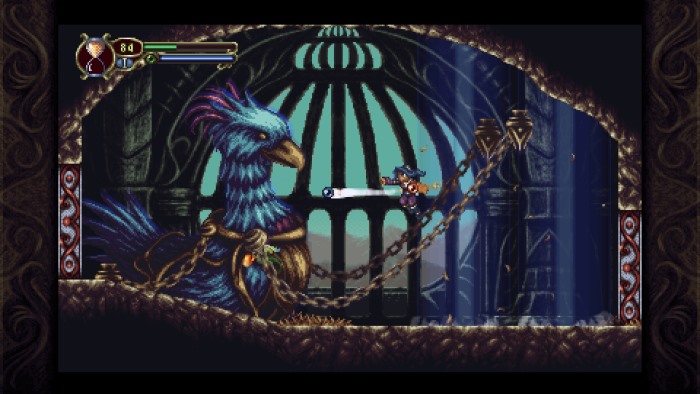 The game plays out in typical Metroidvania fashion, so you’ll be exploring a map to advance your story, going back to previously visited places and times after unlocking additional skills. The formula is well known, and this game does a good job implementing it. The map has the possibility of adding markers on it for further reference, which is a nice feature to use considering there’s nothing but this to remember key places in the game. There are also a couple of sidequests that you’ll be able to complete for certain NPCs that will provide some rewards.

The weapons system is centered around the use of Orbs. You can equip two of them at a time, so it allows for a lot of build possibilities depending on your preferences. Also related to the orbs are the necklaces, which allow you to use spells based on an orb’s power (for example, the spell for the sword orb produces a gigantic sword that smashes everything in front of you), and the rings that add passive upgrades to your orbs. The other main thing that will help you through your quest is the Timespinner, which allows you to pause the time for a couple of seconds. This will be pretty useful if enemies corner you, or if you simply want to use a monster as a landing pad to reach a higher ledge. 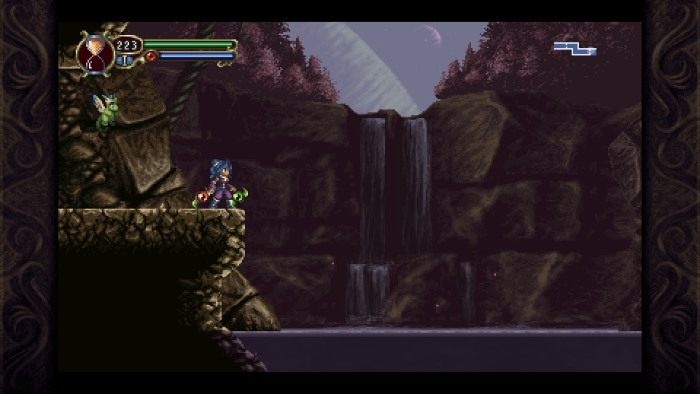 As you progress, you’ll also meet with familiars, which are small creatures that will assist you in your quest with their attacks. As you use them, they’ll level up with their own experience system and get stronger. The other thing that can level up as you use them is your orbs. You’ll also be able to upgrade them to become right away a bit stronger if you bring the right objects to a merchant in the game.

Visually, this game is an ode to yesterday’s Metroidvania games. The style and “dark” tone reminded me a lot of the Castlevania series, with graphics comparable to a good 2D game on the original PlayStation. The soundtrack is just as retro-inspired as the visuals and is a blast to listen to. Lots of orchestral tracks that create an incredible atmosphere in the game. Speaking of which, Timespinner’s soundtrack is available on Bandcamp, it’s totally worth listening to to give you an idea of what to expect.


The game started to me as yet another Metroidvania game, which we’ve received a ton this year. But, as the story started unfolding, it started to grow on me, and I wanted to know more about what happened between the attack in the present day and the war a thousand years back. As they say, at one point in the story, history is only being told by the victors, so for you, the time travel ability allows you to understand a bit more how things went down. 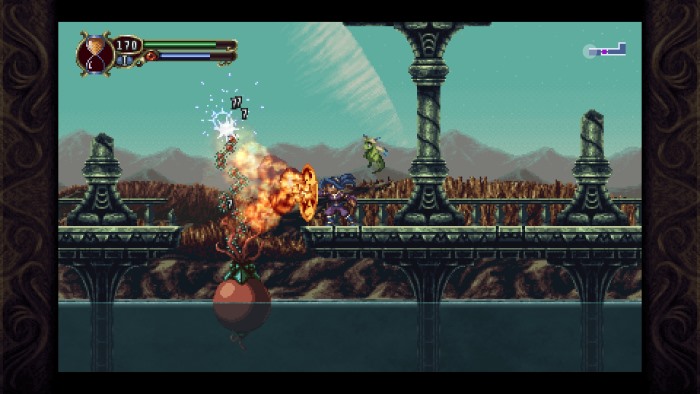 The combat and upgrade systems were fun to tinker with as you can end up with so many build possibilities. You can even swap between three different builds with the press of L2 or R2, so you don’t end up stuck with the same build throughout the whole game because you’re too lazy to change orbs!

Overall the game didn’t have any major game-changing features that we haven’t seen in this genre of games in the past, but what it did it did well, and I ended up having a lot of fun playing it. 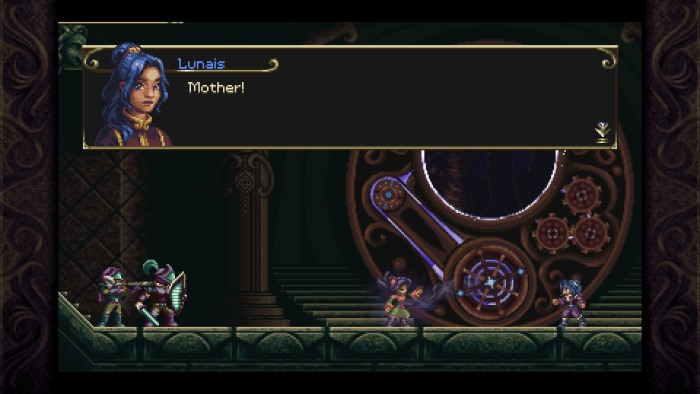 As for the trophies, it shouldn’t be a challenge to platinum this game. There’s obviously a couple of trophies for gathering every collectible out there, doing every side quest and exploring the map to 100%, which pretty much every game in the genre has. Also in the mix are a lot of story-related trophies, which don’t really need any explanation. Other than that, there’s a trophy for beating the game on Nightmare mode, which could’ve been a challenge, but since you can do it on New Game+, being overpowered from your last play, it ends up as being not that much of a challenge on your way to the platinum.


Final Thoughts
In the end, Lunar Ray Games didn’t reinvent the genre with Timespinner, but they’ve done a truly enjoyable game that’s likable from start to finish. If you’re a fan of retro Metroidvania, you’ll enjoy it even more for its incredible art style and soundtrack. If it wasn’t for the amazing Guacamelee! 2 that came out not too long ago, this would’ve been the best Metroidvania I’ve played this year!

Disclaimer
This Timespinner review is based on a PlayStation 4 copy provided by Lunar Ray Games.