[PlayStation 4] My Memory of Us Review

My Memory of Us is a puzzle platformer game set in a world at war, influenced by events in Poland during World War II. Will the tale of two friends capture your attention? Find out in our My Memory of Us review!


The story starts with a young girl that finds an old book in a store, and after the owner sees a picture dropping from it with a girl that greatly resembles the one in front of him, he decides to tell her his story with this girl, from a time when his country was at war.

This will take us back and give us a younger version of the man, with the little girl he meets and becomes friend with. Their story will start as a simple friendship in a country ready for war, with barricades and tanks everywhere, as they go out to steal a cake for her birthday. But on the way to achieve their “quest,” bombs will fall from the sky and the two will have to find their way into a bunker… only to later exit and find a city invaded by the Robot King, who paints people’s clothes in red to “mark” them to be seen by everyone. 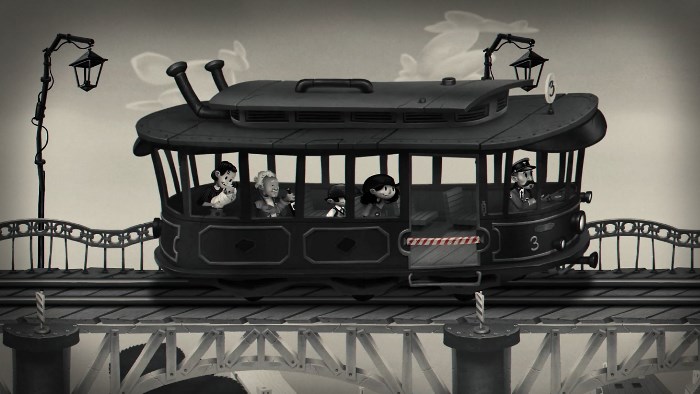 As the story evolves, you’ll be taking control of the two kids as you solve puzzles to progress. Each one has distinct abilities that you’ll use to your advantage. The girl is able to run, which helps with escaping the guards, and she eventually finds a slingshot to hit switches and such. The boy, on the other hand, is more of a sneaky type, so he’s able to pickpocket and walk silently to avoid being discovered. Other things will also fall into your hands to help you on your way, but I’ll let you discover them on your own. You can also grab the other kid’s hand so that when you walk around you’re not forced to alter between the two to move forward.


With all those skills in hands, you’ll be confronted with a few puzzles in each of the 18 chapters the game has. The variety of the puzzles is pretty nice, as it goes from simply moving objects around and hitting switches to things like blinding a man so he drops a bottle on a cart so you can pick it up after. Sometimes you’ll also have to split the two friends so that one can do something to open up possibilities for the other. None of the puzzles were particularly difficult, especially considering that all “key objects” for the puzzles are painted red, which makes them stand out in a game that is all black and white! 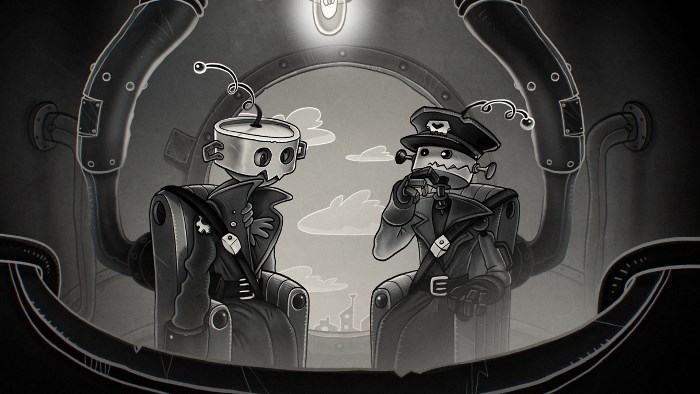 Speaking of which, that retro black and white look was incredibly nice to look at, giving the game the 1940’s atmosphere that it is influenced by. For me, it also helps to convey a strong message after the invasion started, seeing people painted in red being stared at by everyone else. The dialogue is only exposed in pictograms, so it allows for a slight interpretation all while carrying it’s message to the player. The music of the game was also perfect for the setup, some classical acoustic music with tempo changing depending on the stress building up in the events. You can find it on bandcamp if you’re curious ! 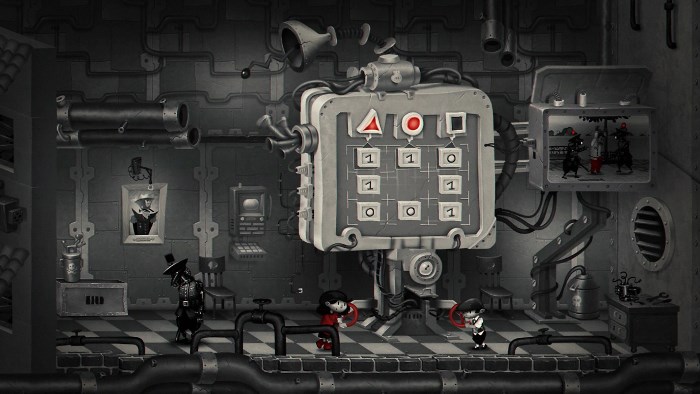 Even though it’s not a challenging game, it was still a pretty fun game to play! It’s look is truly charming, and the way the story is presented gives you enough information to understand the underlying reference but leaves a lot open for interpretation for how the two kids’ story plays out. There were a couple of times though where I slightly raged at the game, mainly for escape sequences. As simple as most of the puzzles were, some sequences where you had to flee guards needed you to have a near perfect timing, otherwise you were pretty much certain to be captured. In a game where the focus is on the story and puzzles, I wouldn’t expect to have parts where you have to do near-perfect “speedruns.”

As far as trophies are concerned, this should be a pretty easy Platinum to add to anyone’s list. Apart from completing the game, there are a few collectibles to gather and some chapter specific trophies, but since there is chapter select, there’s nothing that can be missed! 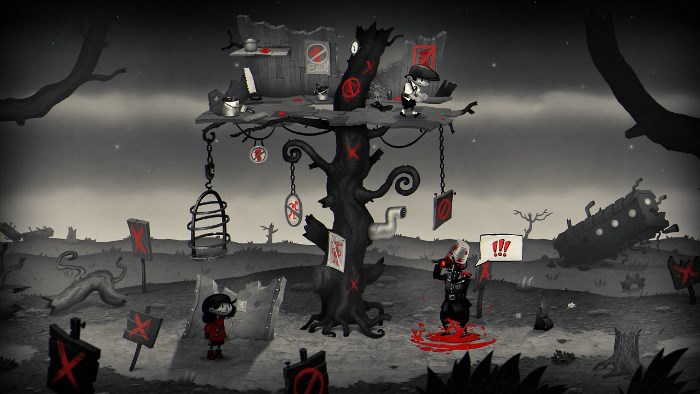 Final Thoughts
Although the WWII setup is one that’s been played out in a lot of games, The Memory of Us didn’t feel like just a rehash of some other game. It’s a simple puzzler that’ll give you some fun for an afternoon or two, just not with the same depth story-wise that a game like Valiant Hearts had.

Disclaimer
This My Memory of Us review is based on a PlayStation 4 copy provided by Juggler Games.