Hover is a crazy parkour game that’s all about bringing back the fun to a city where it is totally restricted. If you think you have what it takes, then check out our Hover review!


The year is 4214, and the action takes place on ECP 17, or as its citizens call it, Hover city. The Great Administrator that took over the city has forbidden all fun, and everything from city traffic to the whole population is monitored to ensure this is respected. The communications with the Galactic Union was even cut off to ensure nobody could tell of this ruling. But a group of rebels, who call themselves The Gamers, have formed a resistance to fight this propaganda and re-establish contact with the Union. This is where you appear, out of a clone lab, as a rookie that will help The Gamers on this ambitious mission. 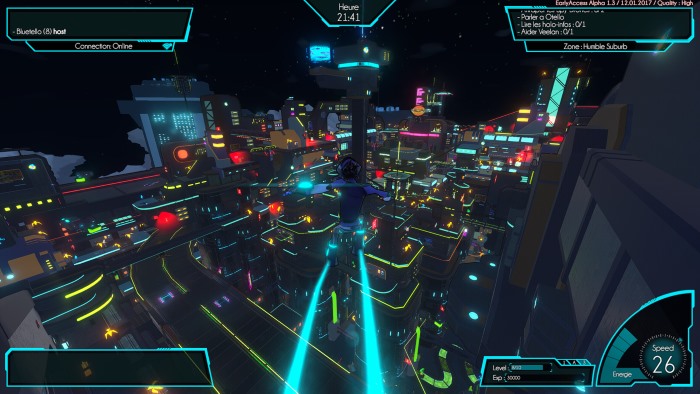 Speaking of the lab, this is actually where you start the game, as it serves as a tutorial level. Here, you’ll learn the simple movements you can pull off in the game. Apart from running around, you’ll obviously be able to jump (which includes wall jumping when in tight spaces), but also grind on cables or ramps, or slowly sneak around. Another useful skill you learn about is the ability to rewind. This is something that’s useful if you miss a jump, but also in cases where you activate a switch that opens a timed door that you have to quickly get across. Just rewind yourself back in front of the door and voilà – you’re through the door!

And after that brief tutorial, you’ll be out of the lab and into the city, where the real fun will begin. From here, the city is yours to explore with no other restrictions than your skills to get to where you want to go. You’ll have to explore the place to find fellow Gamers who will give you missions in order to advance the story. Although missions will vary, they generally imply getting from one place to another, as fast as you can and without getting caught by the police. Since all fun is prohibited, you’ll have to avoid security cameras and such, or else you’ll be chased and potentially captured, which will fail your current mission. No worries though, you can always start the mission back. 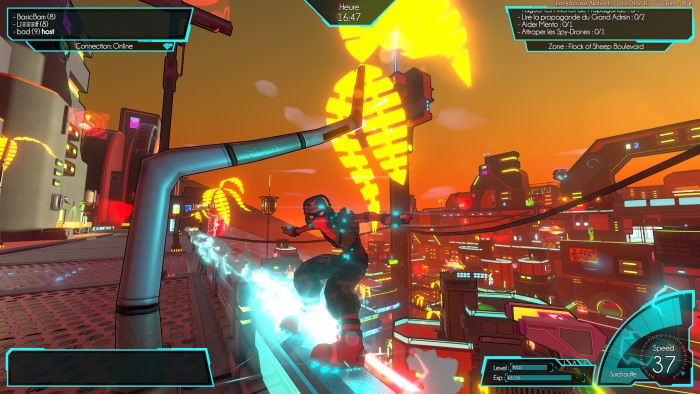 Each mission will also have objectives, either timed or for having a certain score in Gameball matches, that will grant you medals. Gameball is basically a game where you have to get the ball into the other team’s “basket,” but you lose the ball every time someone on the opposing team touches you. This makes for some frantic action trying to preserve the ball and score. Either after completing missions, or just lying around on the map, you’ll get parts that you will be able to use to upgrade your character. Things like speed, jumping or bouncing power, will all be possible to upgrade on your character. And since you actually have a team of Gamers, the more you progress, the more characters you’ll be able to upgrade in order to build your dream team.


The futuristic looks of the game, with all the neons and flashing lights, was a blast to watch in action. Even though it’s a fast-paced game, I never experienced any slowdown apart from the moments I ended up slightly hitting ledges or stuff like this, which was obviously my fault. The soundtrack is an incredible mix of euro dance, drum and bass and electronic music that fits perfectly with the genre of the game.

As I landed in the city after the tutorial, I was glad to see that I already knew everything that there was to know about the controls. Incredibly easy to pick up, and then the rest is just a matter of getting better. As in Tony Hawk games, you can run, jump and grind your way to some incredible combos, which are worth more experience, so even when you’re not in missions and just running around the city, there’s so much to do to keep the fun going. 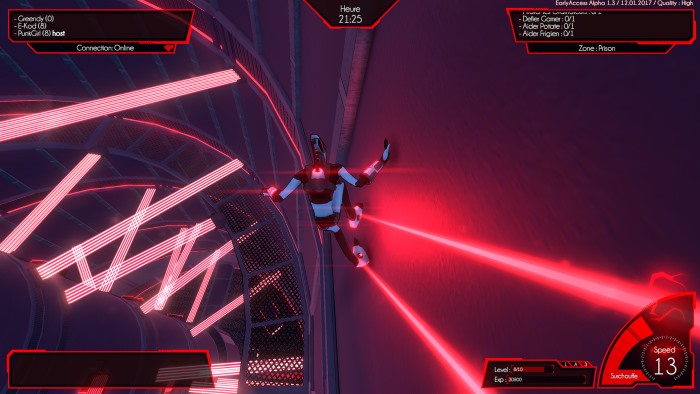 Fortunately for me, because otherwise I found that missions were a pain to locate. You do have an arrow on your HUD that displays the direction in which there is a mission, but there’s no minimap available when you’re playing. Instead, you have to pause the game to navigate to a map that displays full screen as an overlay, so you can continue moving around while seeing the map. The thing is, for a game that’s about running, jumping and climbing your way, it’s a pretty difficult thing to do when you’ve got a huge map covering everything.

Other than that little caveat, and the fact that the controls were a bit clunky from time to time, it was a whole lot of fun to play. There’s a nice variety in the missions, and it’s easy to retry them if you fail. You’ll also want to go back to some missions later on though because it’s obvious at times that you need to have some better gear equipped in order to get a better time for the medal. And to add up even more to the replay value this game offers, you can even go online and join the fun with other people to create a bigger team. 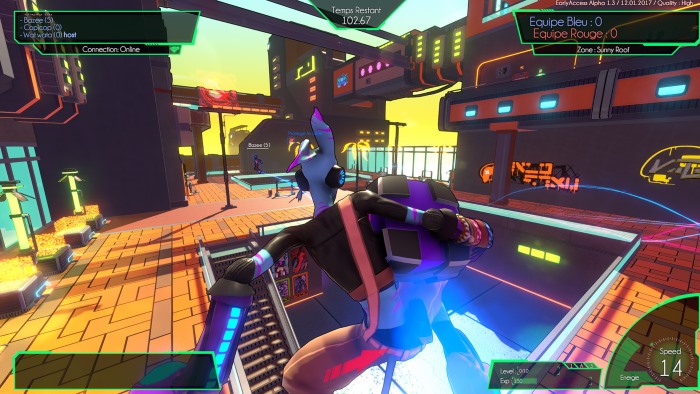 As for the trophies, this should be a moderate platinum to get. Most of the trophies are tied to some specific things you can do in the game, except for the one about ending the city’s dictatorship, so if you can find them, the platinum should be coming your way in no time.


Final Thoughts
Midgar Studio & Fusty Games have created an interesting game with Hover: Revolt of Gamers. It mixes elements from different types of game to produce something original that’s a lot of fun to play and has an incredibly high replay value.

Disclaimer
This Hover review is based on a PlayStation 4 copy provided by Midgar Studios.