[Beyond PlayStation] Next Up Hero Review

Next Up Hero from Digital Continue and Aspyr Media is a fun and colorful online dungeon crawler on Nintendo Switch. Learn more about it in our Next Up Hero review!


Before I dive into telling you what the game is all about and what it has to offer, I want to mention that you’re going to need an online connection to play this one so that you can connect to the servers to sync your progress and to access the many levels, called ventures, the game has to offer. You will also be able to create your own stages and send them to be played by others around the world, which is definitely a nice bonus since creating levels is a fun diversion from the main action in the game. So, to sum things up: there is a way to play offline by hitting Y in the start menu, but you won’t get the most bang for your buck if you don’t play online. 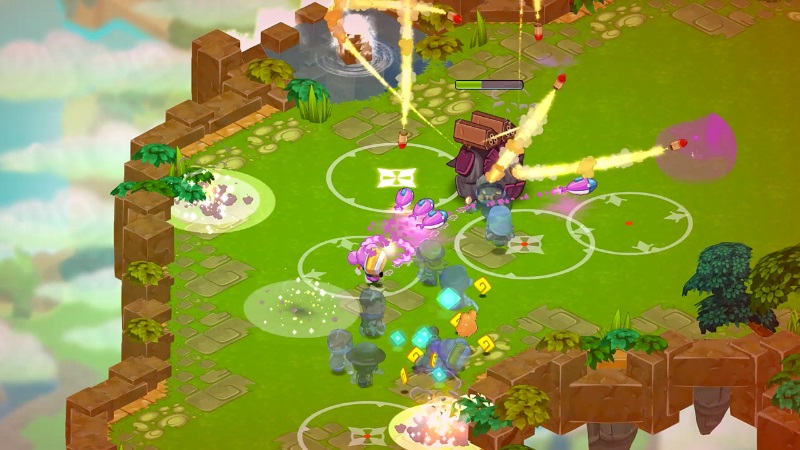 You control your character with the left analog stick and can aim with the right analog stick. You can also dash by pressing down on the right analog stick. You have a dash meter next to your health meter and your special meter, so be sure to keep an eye on that since if your dash meter is empty you won’t be able to dash around, which could put you in a predicament if it happens at the wrong time. Your main attack is mapped to the ZR button, while your secondary attack is assigned to the ZL button. You can cycle through your Ancients with the L and R buttons – more on Ancients in a bit. 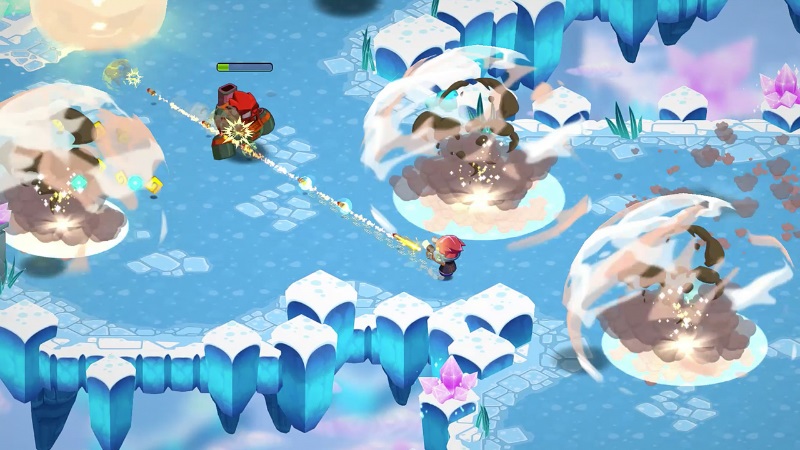 Your characters have four stats you need to keep an eye on to maximize your odds of survival: Health, Attack, Speed and Defense. The characters you can play as also have a Prestige Version available which, as you can probably guess from the name, has better stats than the regular version – and it also has a unique ability. How do you get these Prestige Versions? By spending your Prestige! You get Prestige from defeating enemies – they’re the golden coins. On top of that, you can also get Blue Orbs as drops to increase the max capacity of the Special Meter.


The game will throw you into a short first stage/tutorial adventure right from the start. It is here that you will learn about how you can press and hold down the X button near a fallen warrior to have his/her echo join you in battle. You can use them to attack enemies, and you can also combine them to unleash the powers of one of your Ancients. Ancients can, for example, gift you with temporary invincibility, boosting your hero’s damage, boosting your hero’s health, dealing damage to each enemy wave if they’re close enough, or boosting you’re hero’s defense, to name some examples. You should always have a full group of echoes with you so that you can make short work of smaller enemies while you prepare to summon ancients at the right time when you face a mid-boss or a boss. 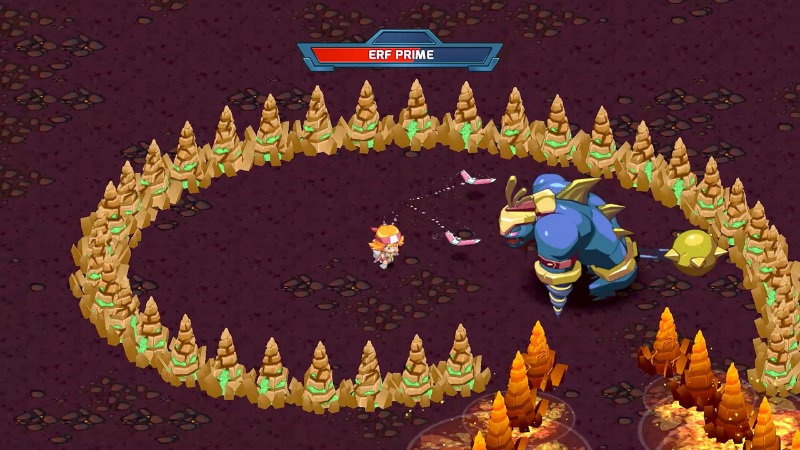 Going back to the Prestige you collect for defeating enemies and opening chests, on top of using it to unlock the Prestige Version of a character, you can use it to purchase new heroes and to boost the chance of finding a rare enemy during your next venture. As you’ve probably guessed by now, the rarer the enemy, the better the loot you can get for defeating it. And since you need to collect many monster tokens to unlock powerful skills, and rare monsters give out very good tokens, the more rare monsters you find, the better your odds of unlocking skills that will be of great use – but you do need to be careful since they pack a punch and can kill you in a blink if you’re not careful. Oh, and once you have a skill you can also level it up if you collect enough monster tokens.


There are many ancients available in the game, so you should check the list of those available to you at all times so that you can customize your loadout and bring to battle a set of ancients that can help increase your odds of survival. I’d suggest one ancient that grants you temporary invincibility for quickly attacking mid-bosses and bosses, one that boosts your health points since most enemies pack a punch, and one that boosts your attack for when you want to go all in to defeat small groups of larger enemies before they know what hit them.

As for the heroes, there’s a good variety of melee and ranged characters for you to unlock, to better suit your playing style. You should first play with the two characters that are more balanced and that allow for you to slowly but surely learn the basics of the game, before you move onto playing with some of the advanced heroes that have attacks that need to be triggered at the right place and at the right time to maximize their damage potential – throwing down an automatic turret too far away from enemies is not going to do you any favors! There are also expert heroes to play as, but these require you to take more risks as you battle enemies, so be sure to leave them for the end once you’ve put in some hours into Next Up Hero. 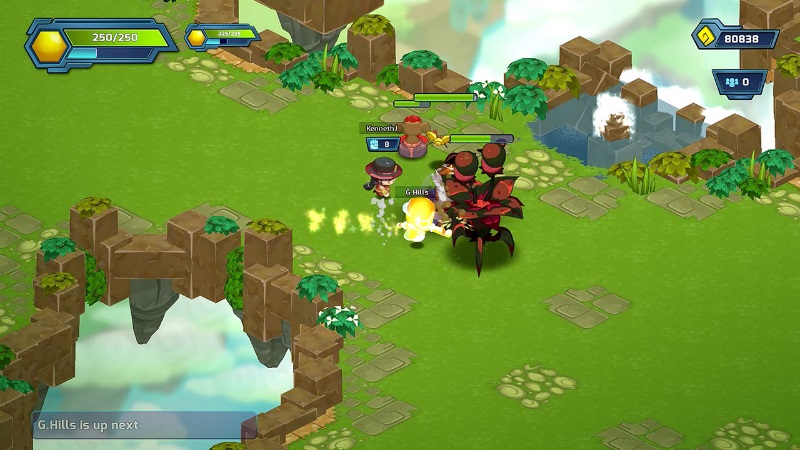 At first, you will only have access to Easy Ventures, Normal Ventures, and Featured Ventures, with the Hard and Insane Ventures, the Player Dungeon Maker and the Champions Trial being locked until you sufficiently level up your character. The game also has featured ventures where you can check promoted stages that have been curated by the team at Digital Continue. As is the case for ventures you take on from the other lists, these are available for a limited time, so be sure to try as many as you can and favorite those you like! 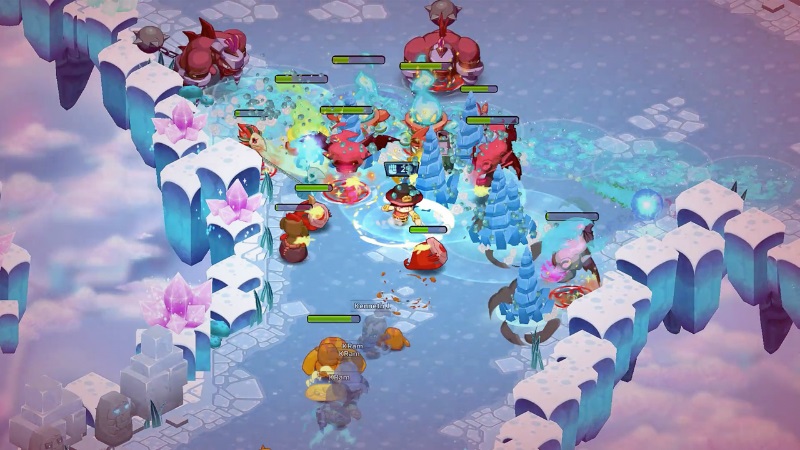 Next Up Hero is a fun and colorful online dungeon crawler with a nice difficulty curve and an interesting gameplay system with its echo companions. There’s a ton of content to enjoy, with all the new stages made available by the development team and by other players every day. It’s got enough depth to keep you coming back for more, and its difficulty curve will make it easier for players of all skill levels to enjoy it.

Disclaimer
This Next Up Hero review is based on a Nintendo Switch copy provided by Aspyr Media.

PlayStation Plus For October – PS4 Edition