I never got to play Super Burger Time in the arcade, so I was definitely up for reviewing the game on Nintendo Switch. Is it worth your time and money? Find out in our Johnny Turbo’s Arcade Super Burger Time review!


In Super Burger Time you will get to play as Peter Pepper Jr., the son of chef Peter Pepper who was the star of the first burger Time. You will walk around with the left analog stick or the D-Pad as you avoid the enemies in the stage, using the B button to jump and the A button to attack them. Instead of having to walk over ingredients to make them fall so that you can complete a burger, you will actually need to jump on top of ingredients to nudge them down. The bigger the size of the ingredient the more jumps you’re going to need to send it down. 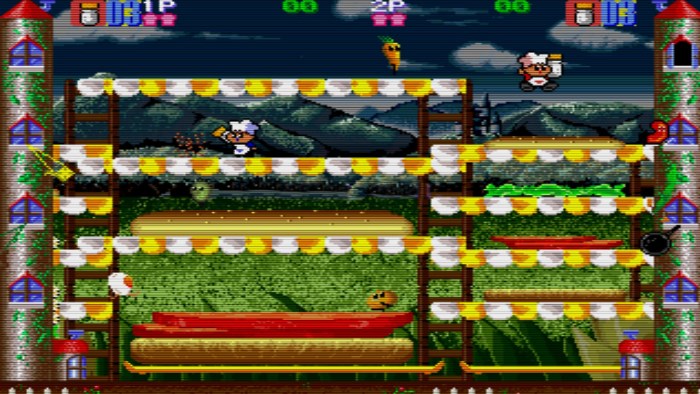 Along with the pepper shaker, you have that can paralyze enemies so that you can touch them to send them away, you can also drop ingredients on top of them so that they are added to the burger. Your pepper shaker is not the only weapon you’ll get to use in this 2D action platformer. The windows on each side of the screen will get some flashing items that will definitely grab your attention, and once you collect one, you’ll be able to use it to make short work of your enemies. 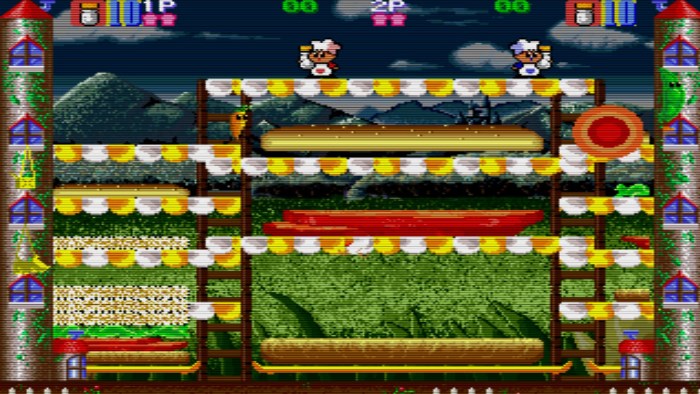 This being an arcade game means that up to two players can join in on the fun. Unlike other arcade games in the Johnny Turbo Arcade’s series since playing in local co-op is easier on a game like Super Burger Time where you only go left and right, and stages only have a few extra screens to each side to which you can return to as you try to solve the level. You’ll be able to focus on all the action on the screen from a quick glance, and you and your partner will be able to plan as you start a stage and perhaps split objectives into each half of the screen (left and right or upper and lower halves) to maximize your odds of survival, since a single hit is all it takes to make you lose a life. 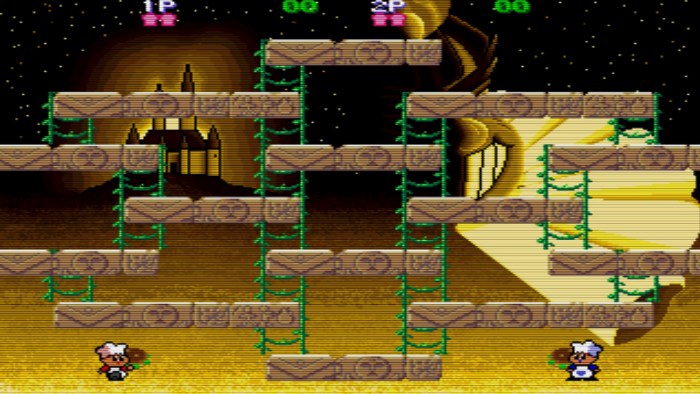 Each of the five worlds you take on has four stages to complete. Three will feature the regular gameplay loop of having to drop ingredients to complete a burger, but the fourth stage will actually be a boss fight that will be different from what you do in the other stages, since you’ll be throwing burgers at a hornets’ nest, a bird’s nest (and then at a bird), to name a couple of examples. As for the enemies you will face, there is a nice variety of potential foes to defeat. There are sausages, over easy eggs, grapes, pickles, carrots, chives, giant pumpkins, hammers, lighters that shoot fire, puffer fish, pears, and more. 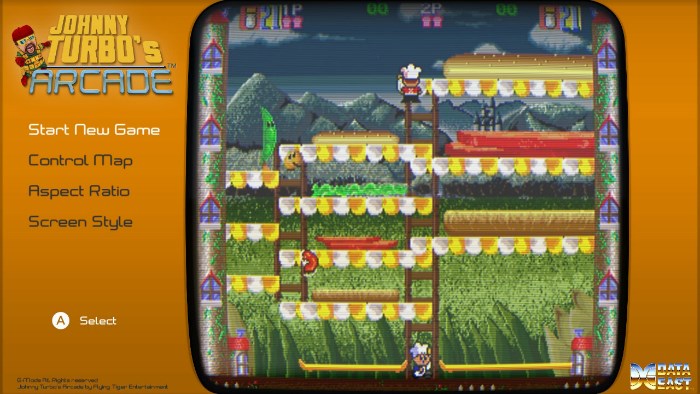 Super Burger Time does the series justice by greatly improving on the look and feel of the original. As Peter Pepper Jr. you have more mobility, more tools at your disposal to defeat your enemies, a considerable bump in the graphics department, and more than enough content to keep you busy for 20-30 minutes, which is on par with the amount of content arcade games offered back in the day.