For this game, you move with the left analog stick or the D-Pad, jump with the B button and shoot with the A button. If you end up without bullets, or if your gun is knocked out of your hands, then the A button can be used to kick enemies hard. You only have one life per credit, but your spy has a health bar so it will take more than one shot or hit to defeat him. 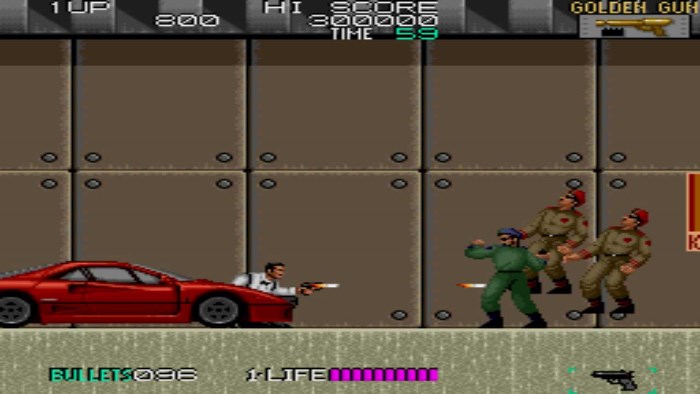 The Council for World Domination, a terrorist group, has struck terror in the nation after attacking the President, the First Lady and the civilians who were at a ceremony. You start the game by selecting your three-number clearance code as an agent – and yes, you can certainly go for a 0-0-7 spy. Terrorists have infiltrated the city, and it is your mission to defeat them before they kill any innocent people. You’ll then jump out of an airplane and descend to the ground as you shoot at the terrorists who are trying to intercept you. You can’t just shoot as much as you want since you do have a limited amount of bullets to use. You’ll need to pick up the aptly marked B (for bullets) power-up to increase your bullet count. You should also be ready for any clocks that enemies drop since these will increase your overall time available to beat the stage. And there are also soda cans that can help you recover some of your lost health. 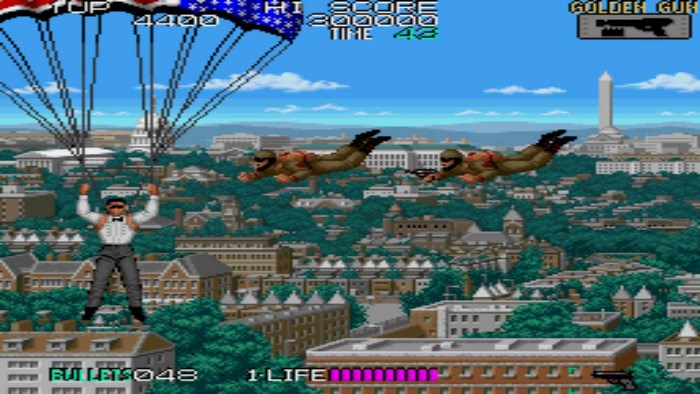 After the skydiving sequence and a short 2D section where you’ll walk around from left to right as you shoot at the many enemies that are out to get you, the game will transition to a driving stage where you’ll be riding a motorcycle. For this stage, you’ll be able to press down on the left analog stick or the D-Pad to move your motorcycle to avoid enemy attacks as you shoot bullets forward. You will run into some flying enemies, and this will force you to press up to lift the front of your motorcycle to shoot at them at an angle since it is the front of the motorcycle from where bullets are shot.


You’ll fight skinny enemies of differently colored uniforms, larger enemies that you need to shoot twice to defeat them, enemies wearing jetpacks, aggressive dogs, dangerously large tigers, sharks, and more. You will also end up fighting bosses along the way, such as the bazooka-wielding thug at the end of the second stage, or the large fellow with metal arms who blocks most of your shots and who can make you lose your gun if you’re not careful. 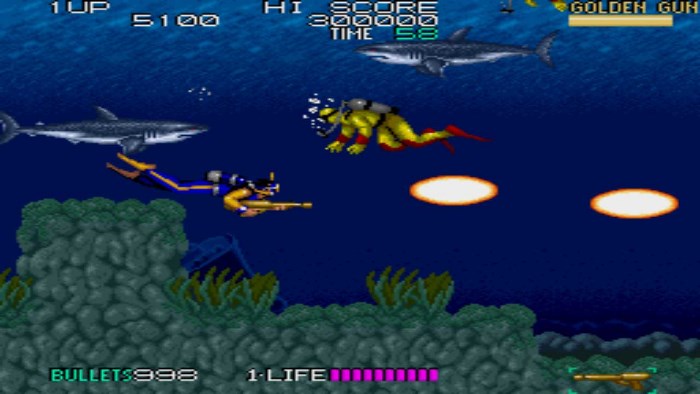 As you defeat enemies, you will also collect the parts to a Golden Gun, which you can see in the upper right corner of the screen. This is a very powerful and special weapon that will shoot out energy shots that will damage anything that stands their way, allowing you to quickly defeat enemies and bosses. But for better or for worse, you need to be aware that the Golden Gun is automatically equipped as soon as you find the last part, which means you can’t manually activate it, so you’ll have to make the most of its pros without thinking too much about its cons. Along with the Golden Gun, you can also find a machine gun power-up which will certainly come in handy since enemies are always in high supply. 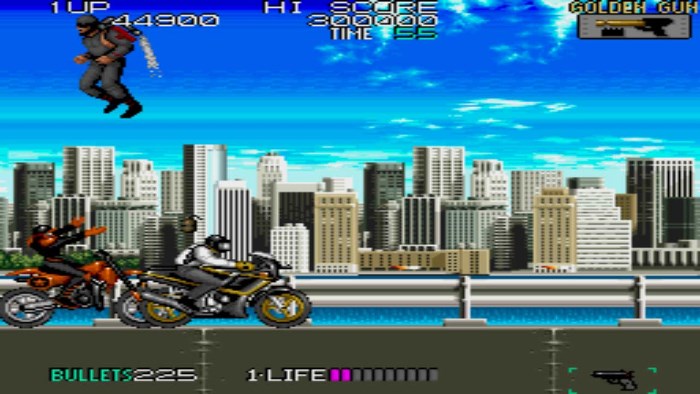 The final stage in the game will do a Mega Man and have you battle against all land-based bosses (I say land-based since there are two stages where you are underwater using a harpoon gun as you attack other divers in the shark-infested waters) before you make it to the final boss in the game. He will be laughing at you as he stands behind an energy forcefield while some very deadly spikes descend upon you. 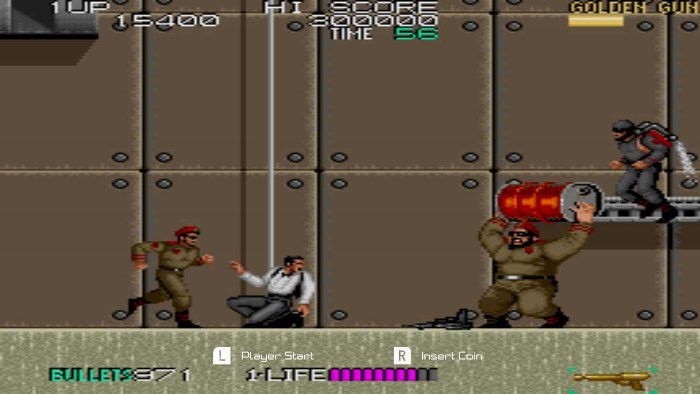 Sly Spy is a short and fun arcade experience you can play at home or on the go. You’re looking at 30-40 minutes at most to complete the game depending on your skill, as is usually the case for arcade games from ages past. The Johnny Turbo’s Arcade continues to grow, and I look forward to playing more games in the series!