Are you ready for some arcade action on Nintendo Switch? Then be sure to check out our Johnny Turbo’s Arcade Joe and Mac Caveman Ninja review to learn more about one of the arcade classics that has now landed on Nintendo’s console!


Johnny Turbo’s Arcade is the new brand under which Flying Tiger Entertainment is releasing a ton of arcade games on the Nintendo Switch. This time around, I got a chance to review Joe and Mac Caveman Ninja, a game I used to play back in the day at the arcades and that I was definitely looking forward to taking for a spin on Nintendo’s hybrid console. Is the arcade experience faithfully represented on this console release you can play at home or on the go? Let’s find out! 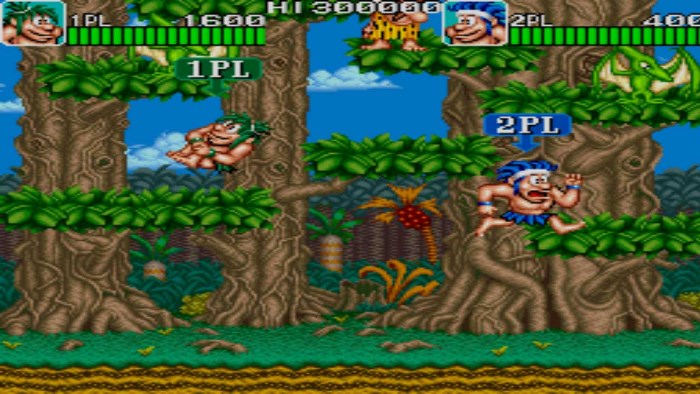 The first thing you’ll see, right after the title screen pops up – and once the announcer mentions the game’s name in all it’s 1991 digital glory -, is the controller layout for the game. You’ll move around with either the left analog stick or the D-Pad, can jump with the B button and attack with the A button. You can hold down the attack button to make Joe or Mac spin his arm around, charging up your attack so that when you release it a larger and more powerful attack is unleashed. Since this is an arcade game, you’ll be able to insert a coin into the virtual arcade machine by using the ZR or the R button so that you can keep going in case you are defeated. If needed, you can pause the game with the – or the + buttons, something that you definitely couldn’t do in the arcade machine! 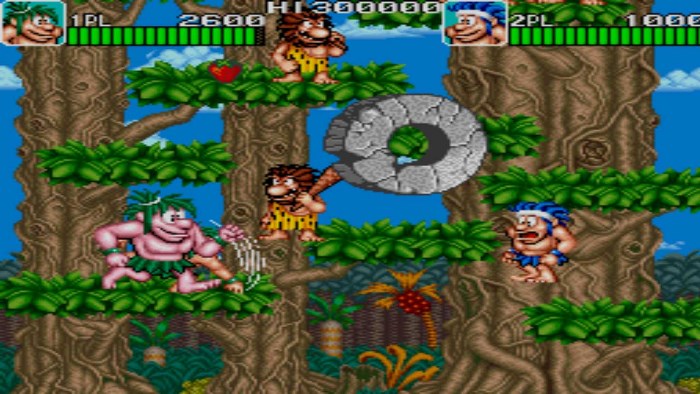 The game starts with some evil cavemen entering your village to kidnap all of the women. It’s up to Joe and Mac to embark on a journey to defeat all evil cavemen that stand in their way, as well as the many bosses, to rescue the women. You’ll run and jump around each stage as you attack enemies with your long-range weapon and your handy club for some melee action when enemies get too close for comfort. You have a health bar and must always eat food to keep your bar as full as possible because it is depleted as time passes, as well as whenever you’re hit. You will find some eggs that can either contain a pterodactyl inside, which will attack you or a new weapon to change the one you have currently equipped.


As you play, you will notice that stages feature branching paths, available after you defeat that stage’s boss. They’re labeled as route A and route B, so if you want to see everything the game has to offer you’ll need to play it from start to finish at least once so that you could, for example, select all route A options during your first run to then select all route B options during your second run. Levels are varied, mixing things up between the regular left to right sidescrolling stages with one that has you jumping up a very big tree, another one where you’re being flown around by a pterodactyl, or one where you’re riding a dinosaur over water. 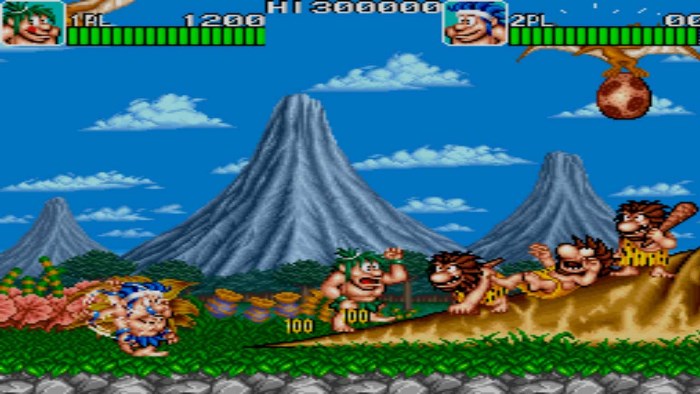 The game offers three aspect ratio options: Filled will stretch the image to fill all available screen space. 16:9 option will stretch the image to give you a widescreen version making everything, well, a bit stretched. The last one is for 4:3 which will have the game presented in a small virtual CRT-style TV in the middle of the screen, with a lot of black around the action. You can also select different screen filters to give the game an old-school feel. There’s a scanline filter, a scanline filter with a virtual “round” TV display, one that makes the game look as if it was displayed by a composite video connection, by RGB, by S-Video, and by way of a VHS grainy filter. You can select to have no filters, giving you a colorful and crystal-clear image. You can also save your progress with a suspend point. 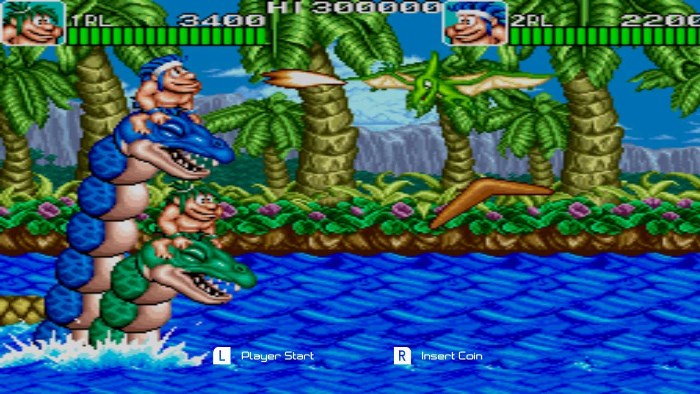 Johnny Turbo’s Arcade Joe and Mac Caveman Ninja is a solid arcade port of a classic 2D arcade action platformer that you should definitely check out. The game plays and feels just like it did back when I played it in the arcade, and I’m sure you’re going to have a lot of fun playing it. Each run is going to take you around 30 minutes, just like back in the day, and is twice as fun when playing with a friend.

Disclaimer
This Johnny Turbo’s Arcade Joe and Mac Caveman Ninja review is based on a Nintendo Switch copy provided by Flying Tiger Entetainment.