FullBlast is a short and to the point shoot ’em up on the PlayStation 4 and the Vita. If you’d like to get two easy Platinum trophies with your purchase, then check our FullBlast review!


With an art style inspired by the 80’s and the 90’s, FullBlast is a vertical-scrolling shooter that will bring a dose of nostalgia to all gamers who spent many an hour at their local arcade, engaging in Shmups. But don’t worry, just because it’s retro in origin, modern conventions and technology have been considered, resulting in a modern and vibrant presentation that is the perfect way to introduce a new generation of gamers to a largely untapped genre.

This is a double review for FullBlast. The game was played by Ceidz and EdEN, and this review presents what they both had to say.

In FullBlast, the planet is being attacked by aliens, and you’ll be the one fighting off enemies to try and save everyone before it is too late. The gameplay is quite basic: you move your ship using the right analog, and you keep the attack button pressed to fire. As you progress, you’ll get different power-ups which will definitively help you on the levels the game has to offer since things can get pretty crazy in the higher difficulty settings. Speaking of power-ups, you’ll lose them if your ship is destroyed, so you have a good incentive to be careful as your ship gets stronger. 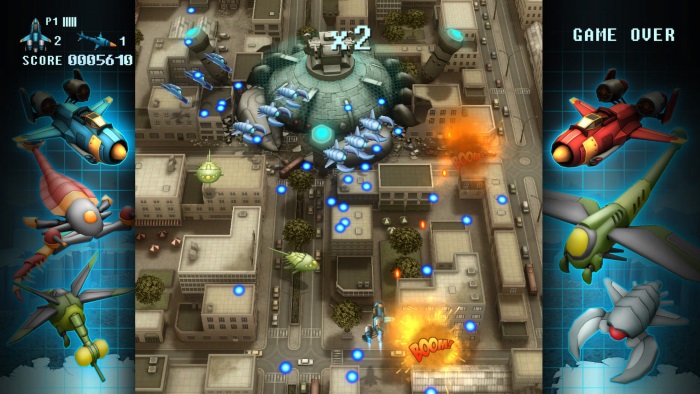 One of the things that surprised me was the backgrounds. Take for example how the city feels: it is alive and detailed. We can see moving cars, wrecks of the enemies that were previously defeated by other ships, and more. They were honestly so good that I took some time to watch them during all the chaos. And as you progress farther into the game, the alien invasion progresses, and we can see the city getting more and more run down. Another thing I liked was the riffing soundtrack that fires as soon as I launch the campaign, a guitar-heavy soundtrack that doesn’t stop until you finish the game. 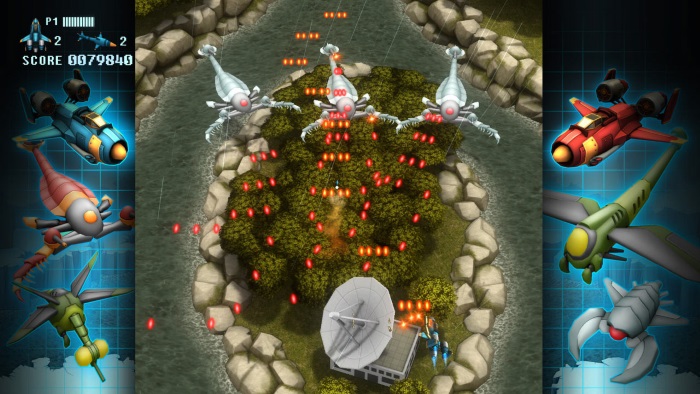 As for the PlayStation Vita version of the game, I thought that the loading was a bit on the long side. Other than that, the controls, for me, felt easier to use, navigating my ship with the D-Pad on Sony’s portable instead of using the analog stick on the go or when playing the game on PlayStation 4. The game did feel a bit slower on PlayStation Vita than on PlayStation 4, but it’s not a deal-breaker.

FullBlast, is a quick Platinum release game that trophy hunters are going to love, because not only is it an easy and fast game to Platinum, it’s a fun game to play which, to be honest, kinda surprised me since my time with the game went better than what I was expecting!

As you can tell from the game’s trailer and the screens in this review, all the action takes place in the middle of the screen, with the sides of the screen not being used for much other than some static images. Something else I wanted to mention is that this one is a straight up shoot ’em up release with an old-school flair, so it never goes into bullet hell territory, so worry not if you’re a fan of that subgenre since you will get a chance to enjoy your time with FullBlast without issues. 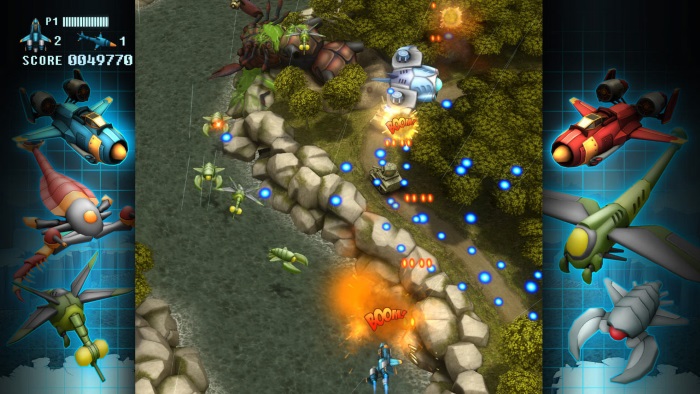 The game being cross-buy is great since you can buy either the PlayStation 4 or the PlayStation Vita version of FullBlast and you will automatically get the other version at no extra cost so that you can take on this shoot ’em up either at home or on the go. Shoot ’em ups usually aren’t very long, and that is also the case for FullBlast, so you’re looking at around a couple of hours at most for playing all stages from start to finish, especially if you have experience with shoot ’em ups and manage to max out your ship’s power-ups to have access to a spread shot and a homing missile to attack enemies.

Final Thoughts
Fullblast is a fun shoot ’em up on PlayStation 4 and PlayStation Vita with plenty of levels to play for an entry in its genre. It’s also cross-buy, so a single purchase will get you both versions, which is great for trophy hunters since the game has two separate lists of trophies, so one purchase allows you to get two Platinum trophies for your collection!

Disclaimer
This FullBlast Review is based on PlayStation 4 and Vita copies provided by Ratalaika Games.