This is a double review for SNK HEROINES ~Tag Team Frenzy~. The game was played by ThaRaven403 on PlayStation 4 and EdEN on Nintendo Switch. This review presents what they both had to say.

The story mode for the game has the 14 characters waking up in a mysterious mansion, and their only way to escape from all of this is to fight their way out. A mysterious man watches them, and he will try to interfere with their plan, as he has something else up his sleeve to gain more power. The cutscenes during the seven fights long story will provide information on this overall plot, but the core idea will remain the same no matter which characters you choose to do the fighting. 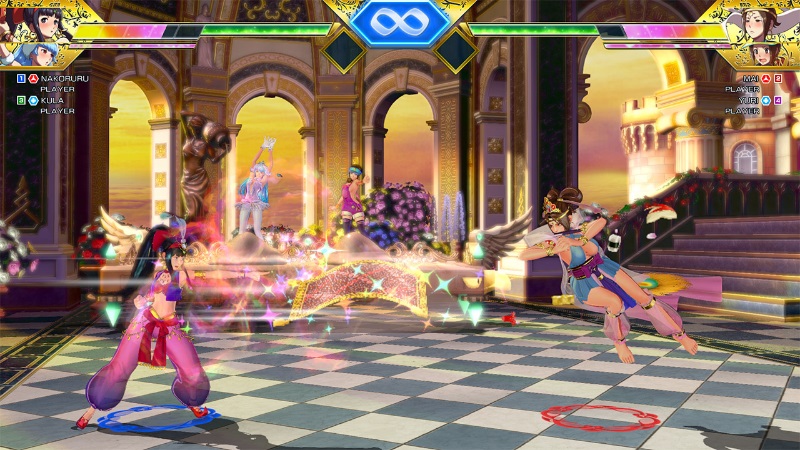 The fighting occurs in teams of two but sharing the same energy bar. You can switch anytime for the cost of some spirit energy. And on top of the shared energy bar, the fight doesn’t come to an end when your health reaches zero. Instead, you’ll have to have enough spirit energy to perform a “finishing move” to end the fight. This adds a bit of difficulty at times, as you’ll have to continue fighting if you used up your energy in order to gather some more, so although the fighting is simple, you’ll have to strategize a bit to win.


Speaking of the fighting itself, this game takes things back to the basics. You attack with the Square and Triangle buttons, throw with the X button, and perform specials with the Circle button (with the d-pad for different moves). This makes for a game that’s easy to pick up, as there are no memorizing of a plethora of moves, yet that might be a bit too simplistic to provide depth in combat, especially for people who are fans of more complex fighters like Mortal Kombat or Tekken. With a flick of the right thumbstick, you can also throw items at your opponent after picking them up on the stage by destroying the capsules.

As for the different modes the game offers, it’s pretty standard fare. You have the story mode, versus and survival modes, a training one, and a basic tutorial of about 20 quick lessons to get you going. You can also go online against other people, again that’s pretty standard for a fighting game nowadays. As you fight, you’ll also earn gold, which you can spend on costumes, accessories and voice styles for the different fighters to change their look.

Visually the game is nice to look at but is nothing spectacular in terms of graphics. It’s as colorful as a lot of other SNK games, and has some Japanese voiceover during cutscenes. I was pretty thrilled to start this one, mostly because it was nice for a change to have a simple fighter which doesn’t focus on mastery of your characters and on having to go online to compete in ranked matches. It’s a basic fighter that is fun and easy to pick up since everything clicks after playing a couple of matches.

On the other hand, though, after playing a couple of dozens of matches, I quickly got to a point where I felt like I was just doing the same thing over and over again. The 14 characters all have different looks and fighting styles, but in the end, it’s mostly you taking on the same patterns, trying to get your opponent’s health as low as possible while still keeping some energy handy so that you can quickly combo into the finishing move to win the match. 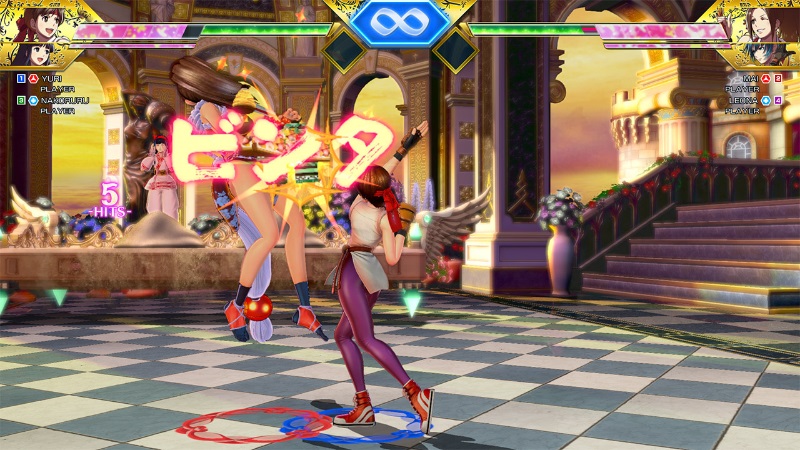 As for the trophies, you’ll be surprised to see a game with close to no focus on playing online. There’s no such thing as playing 200 matches online and winning a gazillion of ranked matches. There’s some for playing the different types of online matches (not necessarily winning!), but that’s it! Other than that, the list is simple, with a part of it that has you finishing the game with all 14 characters, surviving 30 matches in survival and a couple of versus games. The rest of the list will be the grinding part, as you have to gather 500k gold and spend it on accessories and such. Nothing really difficult, but pretty long to do.

I’m a fan of fighting games, and those from SNK are definitely some of the best out there, so when NIS America announced that SNK HEROINES ~Tag Team Frenzy~ was coming to the Nintendo Switch, I was definitely more than ready to take the game for a spin. I like SNK, I like NIS America, and I like fighting games, as you’ve probably guessed from all the games in the genre I’ve reviewed here and in our sister site, so this all-female take should be something that we can all enjoy.

And then something weird happened. I started to play the game, selected my first pair of fighters, and as soon as the match began, I tried to use Terry Bogard’s (you know, the female version we get in this one) power wave with the weak attack button… and nothing happened. I figured I might have done it wrong… which with over 25 years playing fighting games felt weird to even think about, but I did it again anyway. And once again, nothing. I paused the game, went into the button configuration menu, and that’s when I saw it: there was a button for inputting special moves! I then checked the moves list, and that’s when I realized all moves were triggered by holding a direction on the D-pad along with the A button. 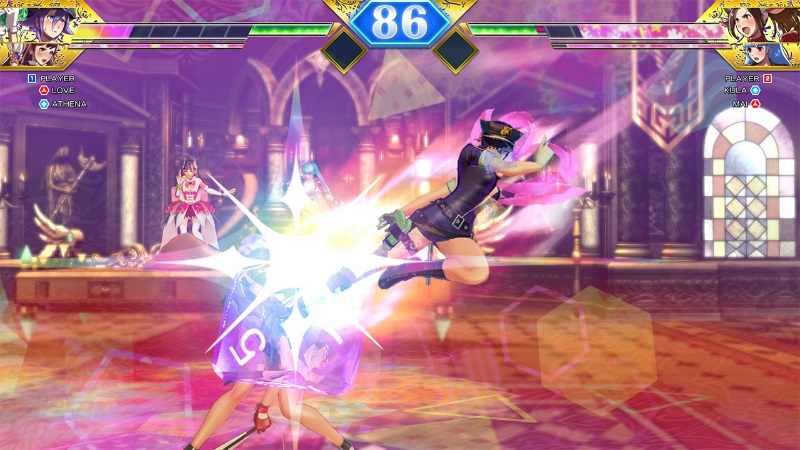 The game offers one weak attack mapped to the Y button, a strong attack on the X button, the A button for special moves, and your throw on the B button. Since using the left analog stick or the D-pad and the A button will trigger your special moves, blocking is mapped to the L button, with the R button left for triggering your finishing move when and as needed. The ZR button is what you’ll use to swap your active fighter with your support character, and I do suggest you do this every now and then since you have to remember that losing health means you get a chance to accrue more energy for your special moves, and whichever character is not actively fighting will regenerate energy at a faster pace. 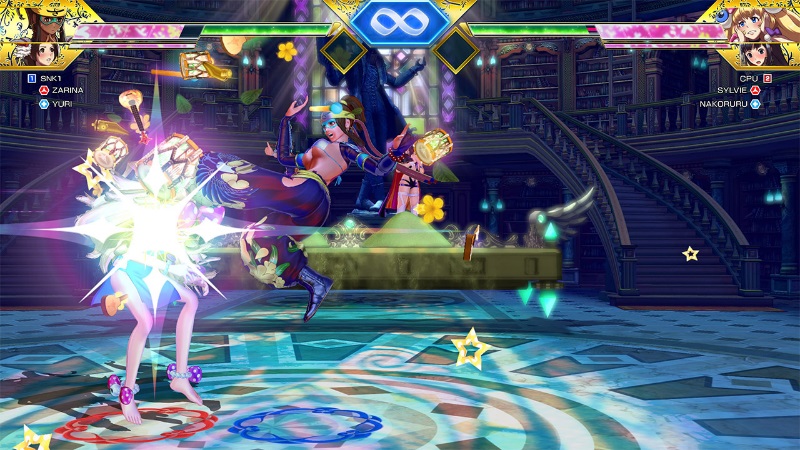 After taking part in a battle, you will be rewarded with some of the in-game currency, which can be used to unlock extra costumes, a ton of accessories you can use to customize your fighters, as well as extra sets of voices. Accessories are split into lists that detail what part of a fighter you can attach them to, with stuff for your arms, your head, your back and more. Want to use some cat ears and a fox tail and change into a new costume with a different color? Pay the price for each item as needed, and you’re good to go! The customization side of things, along with the skimpy outfits that are fan service heavy are going to rub people the wrong way, and make this a game you certainly can’t bust out in public without getting some very specific looks.

Final Thoughts
If you’re looking for a casual style fighter, this one should fit your needs. There’s some room for deeper strategies with how the blocking is set up, but if you’re more of a fan of double cancels mid-frame during a special move to input a super that drains all of your super bars, then you might want to pass on this one, especially if you’re not in the mood to take on the fan service it offers. 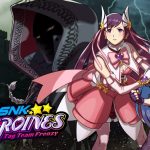 Fun but casual fighter that is heavy on the fan service

Disclaimer
This SNK HEROINES ~Tag Team Frenzy~ review is based on PlayStation 4 and Nintendo Switch copies provided by NIS America.

HyperParasite Making Its Way To Consoles