With METAL MAX Xeno, the dystopian world in which the series has been evolving for more than 25 years is finally landing on the PS4 console. Read our Metal Max Xeno review to find out if the game is worth diving into!


After our civilization built a super computer named NOA to help with the global warming problem, the whole thing backfired as NOA decided that the biggest threat to earth was humanity. From that moment, what is known as the Great Annihilation wiped the majority of humans from the earth, with only a few survivors still trying to take back what is theirs from the machines; the Earth. One of those survivors is Talis, who’ll be your main character throughout the game. Having lost his mother to the machines, the rage to eliminate them all drives him in his quest for revenge. Armed with katanas and a shiny red tank, his quest will be your quest !

Speaking of his tank, those big machines are an important part of the gameplay. Giant robot machines are not something a human can take on head on, even when you have a cybernetic arm, so most of your travels on the map will be inside your tank. As you close in on monsters, you’ll be able to fire a single shot at them to try and take them out, a kind of preemptive strike. If it doesn’t eliminate the enemy first shot, you’ll begin an encounter, which is a basic turn-based JRPG fight. 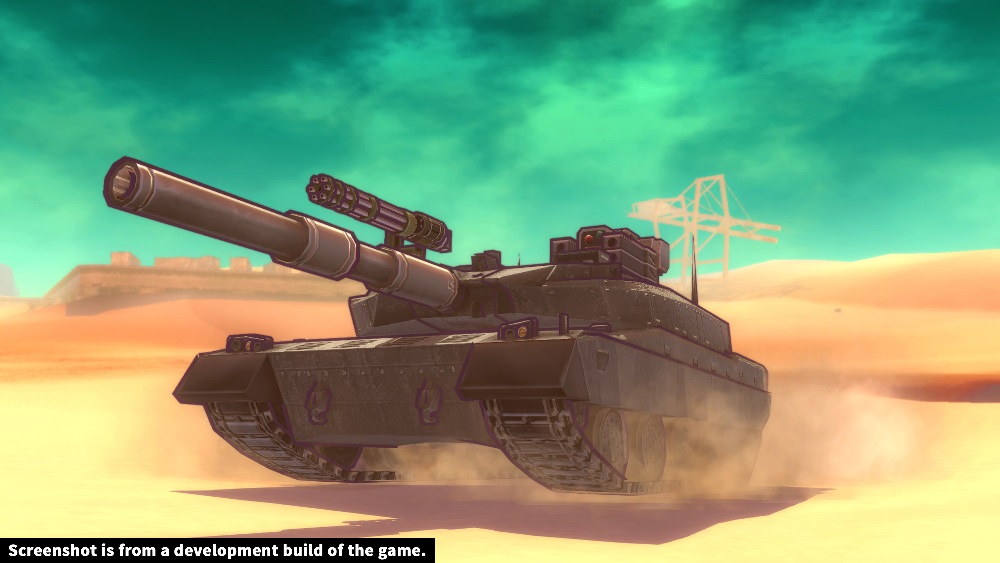 Here, you’ll have access to your standard fare of commands that any fans of the genre will recognize. You’ll be able to attack, choosing from one of the equipped weapons of your tank, use skills that you gather as you level up, or use items. Some of those weapons, whether used in encounters or on the map, have limited ammo, so you’ll have to choose carefully what you use in battles if you don’t want to end up on the losing end against those robots.


From time to times you’ll also be able to explore dungeons on foot, with smaller enemies to fight and loot to find as you explore. Strangely, the way those dungeons played out reminded me of Persona 4, although in a completely different context. 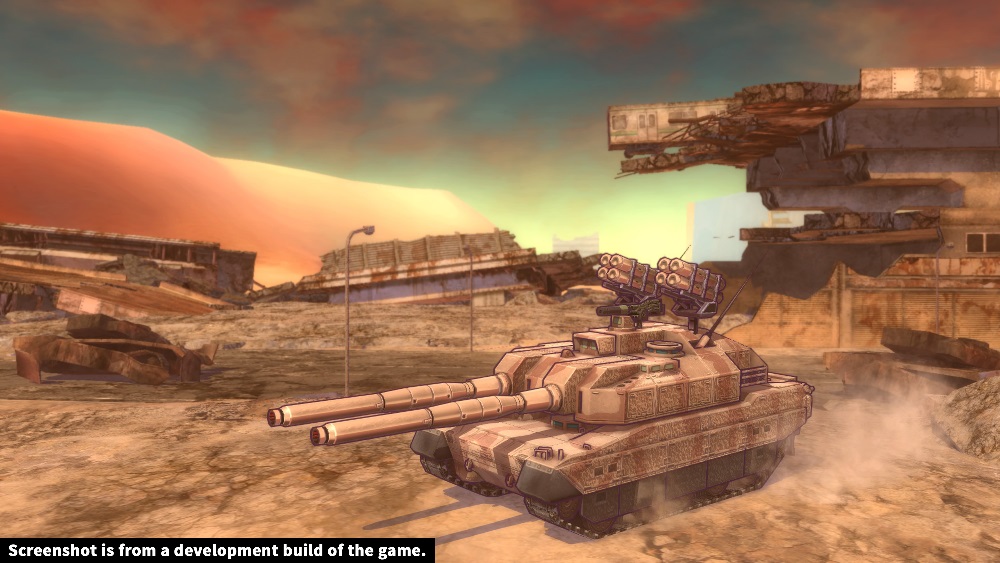 Outside of battles, you’ll have access to your standard fare of customizations that all JRPG fans love. The equipment of your characters, from armor to weapons, but also of your tank, will all be customizable with items and parts you find in boxes or from defeated enemies. Character equipment is pretty standard, but changing your tank’s weapons and parts to allow carrying heavier weapons and stuff like that was a nice change and actually an important part of the gameplay, as sometimes your loadout can really make the difference in some battles. You’ll also be able to upgrade certain aspects like HP or combat skills as you complete in-game challenges that earn you points.

Although not stellar, I did like the simplistic cel-shaded look of the game, with some nice 2D art for the characters in the dialogs. The maps don’t have a lot of details, but given the context that there is pretty much nothing left on Earth, the rarity of buildings or things like this all help in creating the atmosphere for the game. 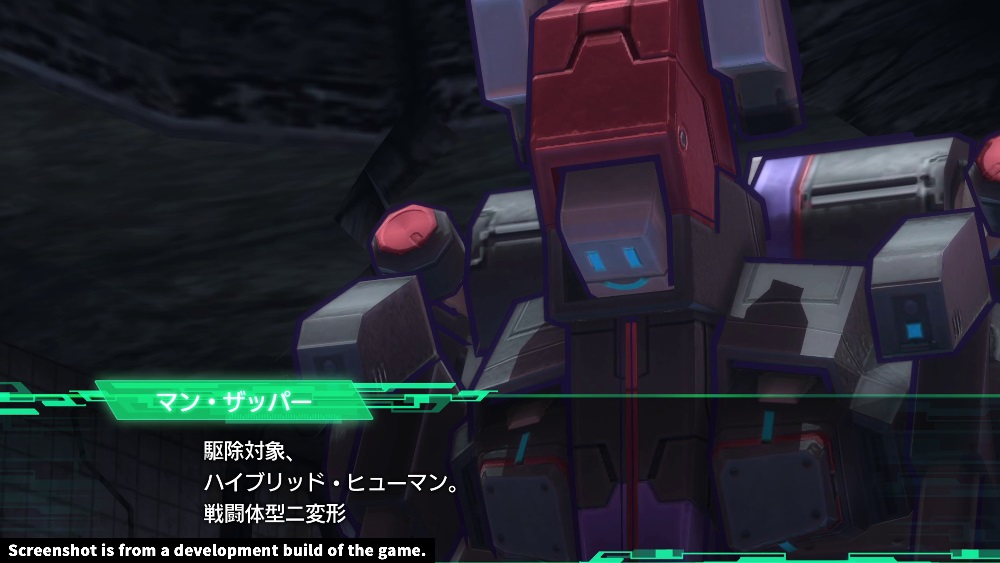 Even though the series goes back to 1991 for their first game, I had never heard of it before and so I went in completely blind to what the previous titles were. What I found was a pretty fun JRPG that slowly but surely grew on me as I got deeper into what it had to offer. First of all, the tanks. Such a nice change to upgrade something else than your character, and there’s so much to do with this, specially considering that you eventually discover new tanks that have different base abilities. Sometimes a faster tank might be what it takes to get an edge on certain types of enemies, so it’s not just a matter of switching to the newly found one, there’s a lot of room for strategy with those.


The ammo management is something I didn’t like at first, purely from the idea that I felt I’d have to grind a lot just to be able to get myself enough ammo to actually leave a bit further than the starting point. Well, I was wrong. First because you discover Bester Points on the map, which act as fast travel spots so you can go back to your base to restock on ammo at any time you want. And just as fast you’re back to the Bester Point you choose to. Also, you eventually get your hands on guns that have unlimited ammo. Although they’re not as powerful as the big ones, they do prove useful in regular fights so that you can preserve the limited ammo you have. 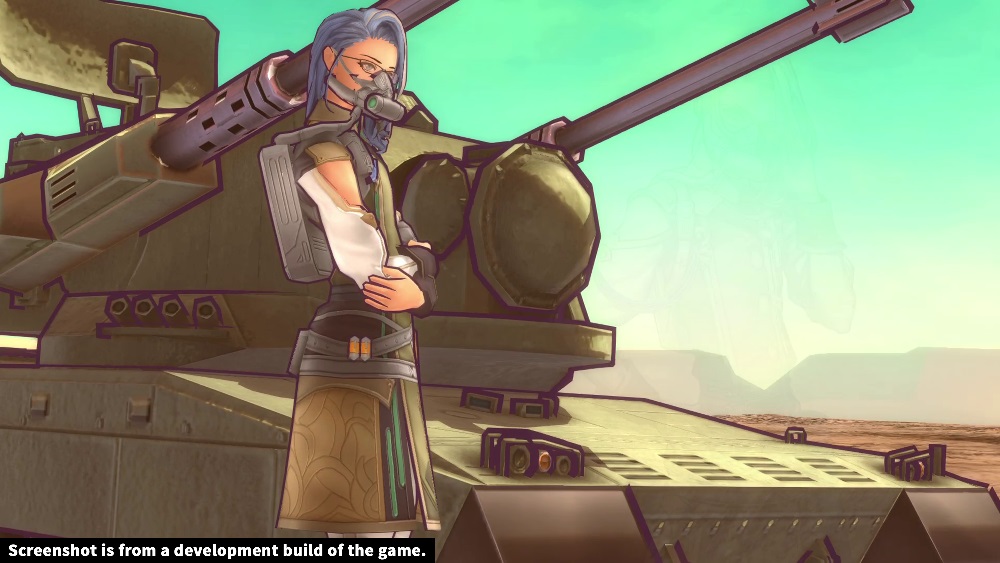 The story was probably the weakest component of the game for me, but it still managed to capture my attention to move forward and see if the human race would be able to survive in the end. I would’ve also appreciated a bit more help or tutorials on the different customization and stats that you or your tank have, since it’s not always clear what some numbers mean when they’re next to an acronym you don’t have a clue what it is.

Final Thoughts
Fans of JRPGs should definitely check this one out from Kadokawa Games. It doesn’t have that compelling story as some other JRPGs have, but the simple yet deep combat system and accompanying customizations have more than what it takes to compensate and give you a fun game to spend a lot of hours on.

Disclaimer
This Metal Max Xeno review is based on a PlayStation 4 copy provided by NIS America.