We’re currently working on a review for Sigi – A Fart for Melusina, so I got in touch with Pixel.lu to talk about the game’s development for it’s PS4 and Switch release. Come check it out!

PS4B: Hi! Welcome to PS4Blog.net. Could you please help us start this interview by telling our readers a bit about yourself and your work?

Hi, and thanks for your warm welcome.

I’m Sebastian and live in Luxembourg, but was born and raised in London in the 70s, right until the personal computer craze hit the UK when the Sinclair ZX Spectrum came out. It was on that rubber-keyboard machine that my dad brought home one evening that I wrote my first game, in BASIC, and was fascinated by actually making things move on our little black & white TV. After spending large amounts of my youth playing on the Commodore 64, I knew I wanted to make games “when I grow up.” Well, I never grew up, but I did help make games in the 1990s for UbiSoft, on projects like Rayman 2 and Tonic Trouble, to name a few.

After a while, I felt it was the bedroom programmer sort of life I was longing for, which they nowadays call indie dev because it sounds cooler. So I’ve been making 2D games and pixel art on and off ever since and have been doing it full time for a while now. And I absolutely love it.


PS4B: Sigi – A Fart for Melusina is making its way to the PlayStation 4 and the Nintendo Switch on September 7. How would you describe the game to someone who’s never heard about it?

Well, I love games, but with growing responsibilities over the years and family life, most games simply seemed to be demanding too much of my limited free time and efforts to actually get anywhere. Experience, upgrades, progress, etc. Nothing wrong with any of that, especially for serious players, but games did not use to be like this in the past, mostly due to hardware limitations and development time. Longing to play something simple, silly and fun led to the creation of Sigi.

Sigi is a classic retro-classic style platformer where the player follows a whimsical Knight’s quest to locate Melusina, mermaid, and love of his life. Run, jump, fire at bad guys and collect lots of treasure on the way. Cliché? Totally! 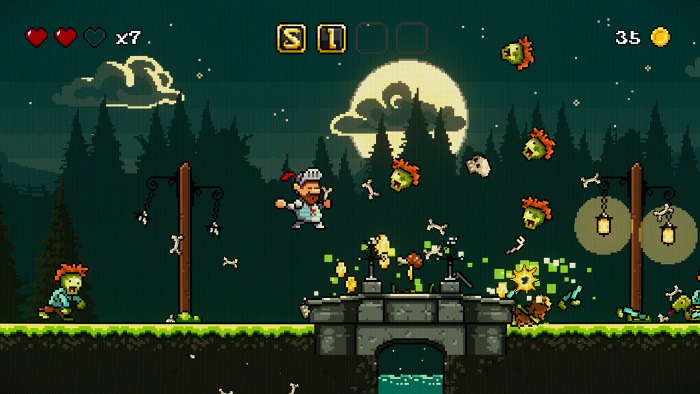 PS4B: How long did it take to work on the game for its console release? Any particular hurdles or challenges you had to overcome?

Well, the game itself took seven months to make, including working on about 90% of the Xbox version. But then things started to get really slow as consoles are a new field for me.

The thing is I always work on several projects in parallel, so that I don’t burn out and can stay creative, but the looming deadlines for the console release meant I had to take a decision: stop all ongoing projects and work day and night on the console releases of Sigi, or outsource the console ports to someone more experienced in the field and push on with future titles. I opted for the second solution, and am super happy I did, as things have gone really well that way. The console ports were converted by Sometimes You and took around two additional months. 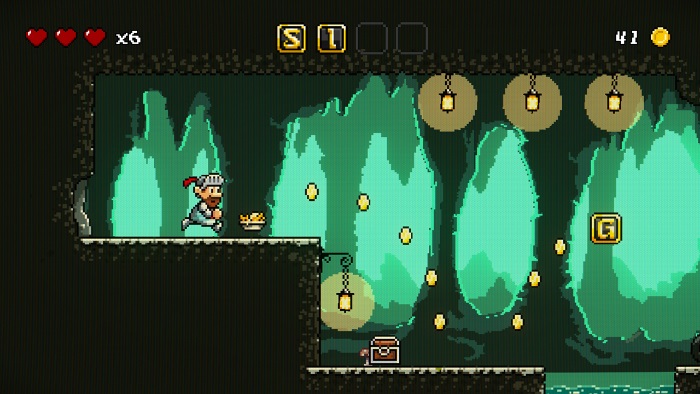 PS4B: With Sigi now ready to go, what other games are you currently working on?

I always have around four games in production, but two are pretty advanced and are worth mentioning.

Plutonium Pirates takes inspiration from old-school classics like Thrust with your favorite 16-bit shoot’em up thrown in for good measure! It is above all an action-packed and ridiculously silly arcade adventure. 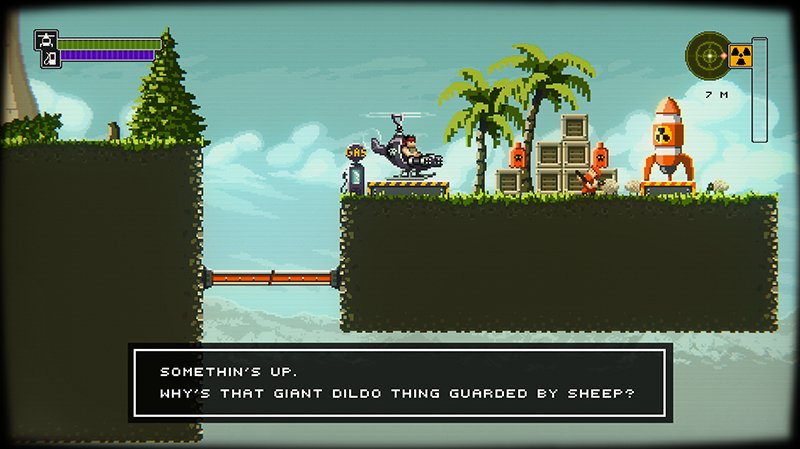 The Democratic People’s Federation is stockpiling ever-growing amounts of plutonium and has become a major threat to world peace and all. You, our last hope (obviously), infiltrate enemy territory in search of plutonium stocks and nukes to abduct.

Then there is Bobby Bombastic, which was initially inspired by the 1984 Activision classic H.E.R.O. in which the player saves lost miners in a vast complex of caves. The game has since evolved heavily to also takes place in the Mayan’ jungle, volcanoes and temple ruins full of nasties. 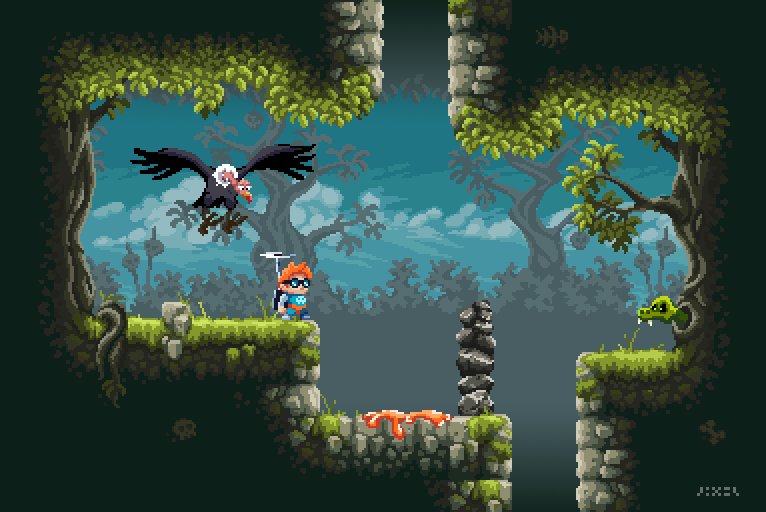 In Bobby Bombastic, a bunch of explorers have gone missing after adventuring into the hazardous caves of Mount Yucata. No one knows what has become of them.

Legend has it Mount Yucata is home to a monstrous giant slug going by the name of Gargantella, whose little cocoons are getting ready to hatch.

Trapped by coincidence or baby food? 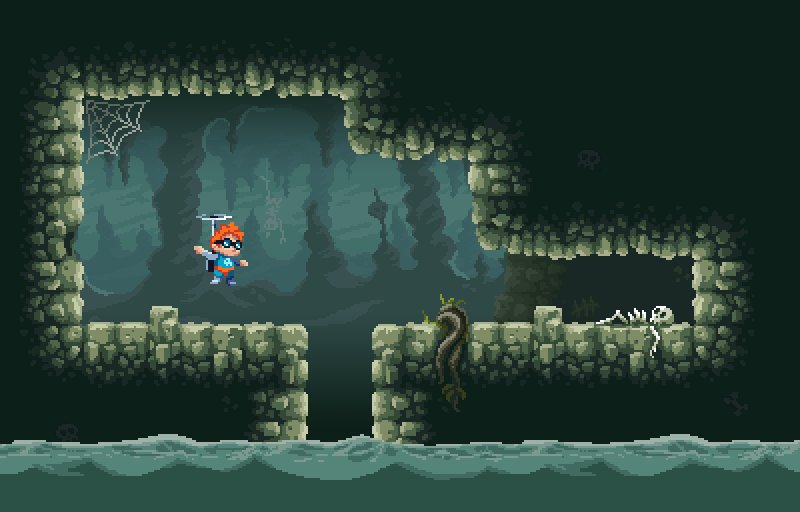 Even though graphics and gameplay have evolved quite a bit since then, as you can maybe tell from the screenshots, here is an early alpha clip.

If all goes to plan, both games should be released on consoles and PC in a couple of months.

The sales and success of Sigi, or lack of, will obviously influence the when and where of these two titles. 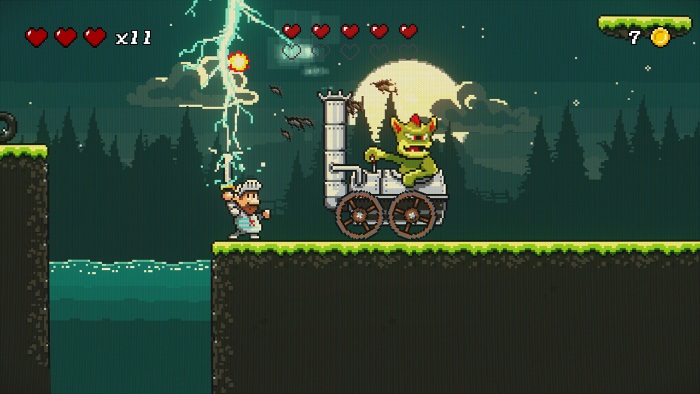 Gaming and games are wonderful, creative and connect us more than ever before. These are very exciting times. I wish everyone out there to cherish these moments for what they are.

Many thanks for this interview, and take care! 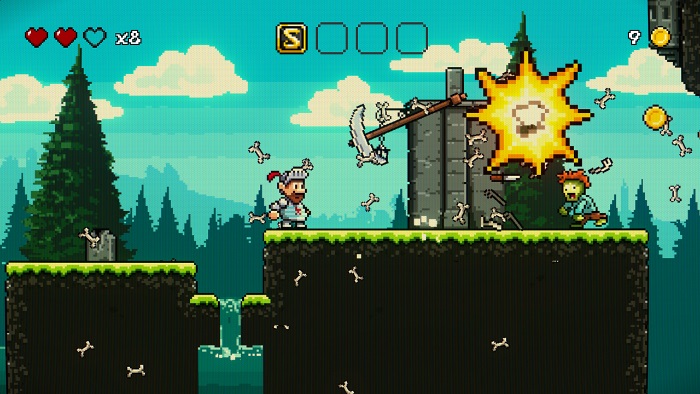