Hero Defense from Happy Tuesday and Headup Games is an action take on the now classic tower defense genre. Learn more about this one in our Hero Defense review!


The game kicks things off by placing you inside of a short tutorial that will teach you the basics. You will first select Jack, the first hero you gain access to, and then place him on the map so that he can use his trusty crossbow to attack the deadly monsters that are out to destroy the town. You will then learn about moving heroes between the map by moving the cursor and selecting a new location, so that you can target more urgent enemies as needed. As you defeat enemies, you will gain orbs, and these can be used to charge your attack so that you can deal some extra damage. Once you charge a hero with the Triangle button, his/her attacks will deal be more powerful, thus allowing you to take out more enemies for a short period of time. 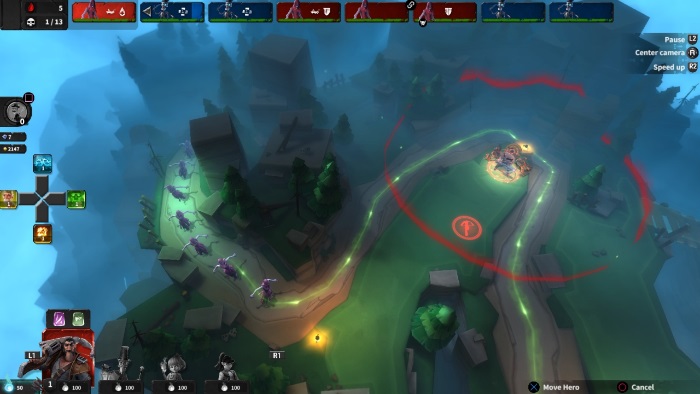 You’ll then get to play a bit as Barrows, who does extra damage against skeletons, but who is weak against vampires – a monster that is actually Jack’s forte. Jack will then join you on that side of the map, and it is then you will notice that heroes near Barrows become more powerful. This will aid you in using Jack to make short work of the vampires that have joined the fight, and you will then be done with the game’s starting tutorial in just a handful of minutes. There are three more characters for you to unlock, but I’ll let you check them out on our own once you play the game! 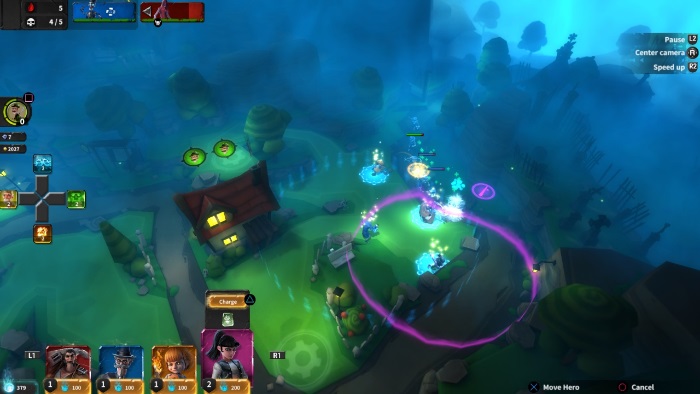 Count Necrosis, who is Jack Sanders’ father, is set out on killing everyone on the island. Your goal is to keep enemies from reaching the town or else they will deal damage to it until it is game over. You must defeat wave after wave of enemies to complete a stage. As you defeat a wave, you will need to review the Wave Bar at the of the screen to learn more about the types of enemies you will be dealing with, as well as the order in which they will be showing up. The background color of the enemy type will let you know which character is the most effective so that you can plan accordingly. Oh, and if you decide to send a wave in early, instead of taking the time to prepare your defenses, you will get an experience and a souls bonus for that wave.


Defeating some enemies will reward you with experience points for your characters. Defeating all enemies in a wave before they can get to town will get you a perfect wave bonus for a nice boost. Once you go into town proper, you will notice it’s been destroyed, so you’ll need to help the townspeople rebuild it. Your first task is to rebuild the Academy, which only takes a couple of button presses. The Academy will allow you to teach your heroes new skills so that they can stay on top of things and defeat the new and more powerful monsters they will find in their path. You will use a character’s skill points to unlock and improve skills, but you can’t just dump points as you wish since there is a limit based on the Academy’s level. You will then need to upgrade the Academy by spending gold, and sometimes crystals. 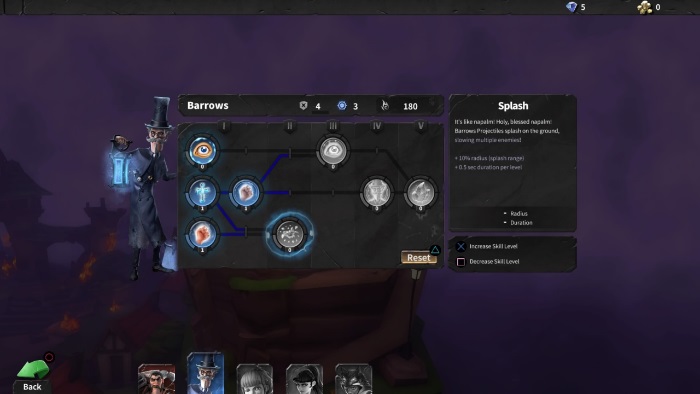 Since upgrading the Academy, as well as the Forge where you can use runes to power up your weapons, and the other buildings you will rebuild in town, requires lots of gold and crystals, you can replay stages by imposing one of the three extra objectives you can select with the L2 and R2 buttons before starting a stage. Take, for example, the cemetery – the game’s first stage. If you go back to it, you can select to try and finish it with the town only having one life, without using any consumables, or to finish it with only one hero. You will also later be able to replay stages at a higher difficulty level for a bigger challenge but with a chance of securing better rewards.

Going back to the Forge for a bit, I did want to mention that while you can find runes as you complete the stages in the game, your best bet for getting plenty of powerful runes is to use coins or gems to purchase better rune bags. The costs for these start at 50 coins, and go up to 250 and 500 coins, as well as 50 and 150 gems, in that order. As you can imagine, gems are the most valuable resource in the game, so if you manage to dump 150 gems to get a rune bag, you’re probably going to find a nice variety of powerful runes that will make a big difference. 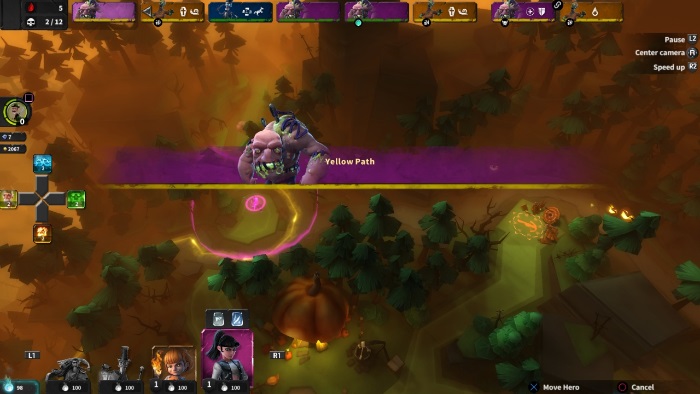 As you progress in the game you will gain access to items such as the Frost Bombs that can be activated with the D-Pad so that you can slow down all enemies within its range, or skills such as the Angry Mob which will defeat all enemies in a wave, a very powerful skill but also one that you need to save until you desperately need its devastating power. This, as well as paying attention to what lane color is going to be used by the next weave of enemies, are very important if you want to survive until the end. At least if you are defeated you will get to keep the experience and gold you have obtained, so not all will have been lost!

The one complaint I have about the game is that the text is small – as in really tiny. If you’re not sitting 3 feet away from the TV at most, then you’re going to have trouble reading marks and instructions. I had to move closer to the TV to be able to read what the Academy skills did and what the Bank, the Forge and other buildings could do to help me in my quest to vanquish Count Necrosis to put an end to the onslaught of enemies. This is far from ideal, and it is something that can hopefully be patched soon since it does get in the way here and there.

Hero Defense includes a full trophy list with a Platinum trophy at the end for your collection. You will unlock several of the games as you progress through the game, unlocking each of the five heroes, defeating the boss of each stage, and upgrade the village to its fullest potential There are also trophies for upgrading every weapon in full, killing 500 creeps with spells, defeating Count Necrosis, shooting 10 bolts at once, killing any boss by using nothing but Angry Mobs, defeating over 100 waves of enemies in endless mode, and more. It’s a varied list that will keep you busy for a long time! 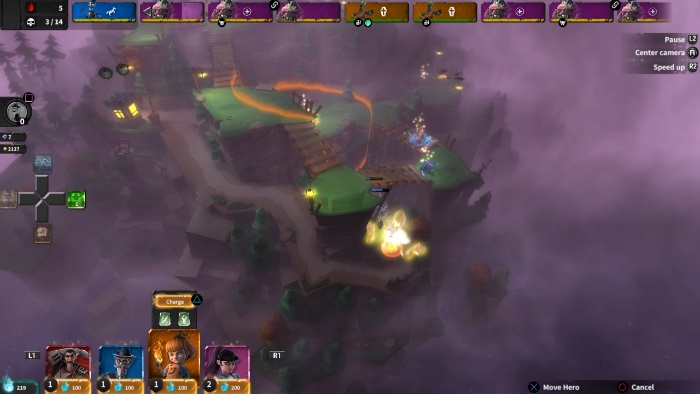 Hero Defense is a fun and challenging tower defense game with some nice twists and gameplay mechanics that will keep you entertained from start to finish. There are more than enough levels to play, and the extra sets of challenges you can take on as you replay them, as well as the difficulty increase you can take on, will satisfy even the most experience tower defense fans out there. Get this one on PS4 right now! 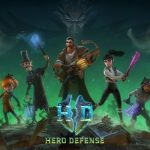 Disclaimer
This Hero Defense review is based on a PlayStation 4 copy provided by Headup Games.