Overcooked 2 is finally out on PS4, and it’s a game you have to get right now. Find out why this is an amazing release in our Overcooked 2 review!


The Onion Kingdom is in peril again and this time it is the fault of the Onion King himself! Reading aloud from the fabled Necronomnomicon, he has cooked up a real problem in the form of a doughy but dangerous army of UNDEAD BREAD called…The Unbread! The Onion King needs you, so chop, fry and bake your way through an all new series of crazy kitchens to defeat them and save the kingdom.

Overcooked 2 is a chaotic co-op cooking game for 1-4 players in which you must serve a variety of recipes including sushi, pasta, cakes, burgers and burritos to hungry customers in a series of unconventional kitchens. Whether it be a hot air balloon, a magical Wizard’s school or even another planet, you’ll have to be bready for anything. Work solo or with up to three friends to prep orders while overcoming obstacles such as fire, collapsing floors, overbearing waiters and of course, the classic kitchen problem of floating work surfaces.

I loved Overcooked, and eventually got the Platinum for this multiplayer gem. When I have friends over to play some couch co-op games with me, we always play a bit of Overcooked together, as this game is still great, even a few years after its release. Overcooked 2 is out today, and it continues with the same cooking experience we know and love from the first release, and it somehow feels even more fun this time around!

As soon as you begin Overcooked 2 you’ll be greeted by the new theme of this release, which starts exactly with the same notes as Overcooked, but then goes into a whole new sonority, as if the music was telling us that, yes, the basics have remained the same, but that everything will be expanded on. You don’t need to have played the previous game to be able to enjoy this one since both games stand on their own. Overcooked 2 will present to you new things to do and new recipes to cook, and everything will be properly explained so that you never feel as if you were missing something. 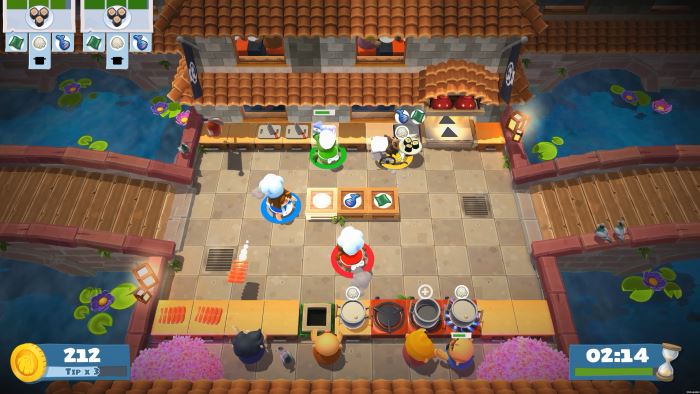 When you land in the menu, you’ll have the option of selecting the (silly) chef that you will control for that particular playing session. It doesn’t affect the gameplay, but selecting the most bizarre chef is certainly also part of the fun, and there are plenty of chefs to choose from since you will unlock more of them as you progress through the game’s main story campaign.

Why are we cooking? Because the Onion Kingdom is in grave danger! King Onion invoked a forbidden recipe and woke up Undead Bread: The Unbread! It’s silly and full of puns, and as I saw it being animated during the opening sequence, I was certainly giggling about how funny and quirky it was. Once that cutscene is over, you are dropped into the world map and can easily notice the graphical overhaul that takes the game past what Overcooked did: the game feels smoother, the map is more diverse and has more depth to it. 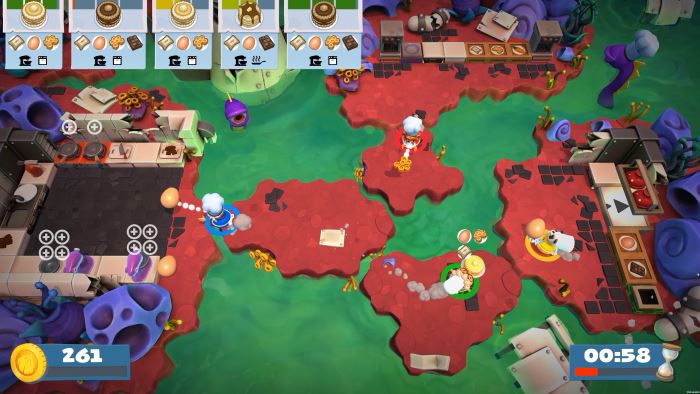 As we begin a level, it starts easy with recipes for things such as like vegetable plates (salad, tomato, and cucumbers), but then it goes right away in into having you make sushi, which requires cooked rice, nori, and fish. The difficulty increases over a nice curve that is very smooth, and obtaining three stars in every level in the first and second world is doable in one or two tries per level at most. The game, to me, felt easier at first than Overcooked, which is great for newcomers. I spent most of my time with Overcooked 2 playing along with a friend or with my daughter, but when none of them were available, I played alone and I’m happy to report that the single-player option for the sequel also feels easier than in Overcooked.


One of the new features advertised for this release is the ability to throw food at other players. To do this, you aim with the Square button and launch the food towards its destination – as you can see in the picture below. I liked how this added some extra depth to an already hard to master cooking environment, making things even more hectic in the process! If you’ve played Overcooked before, then you’ll understand how this new thing is just as crazy as you’d expect! 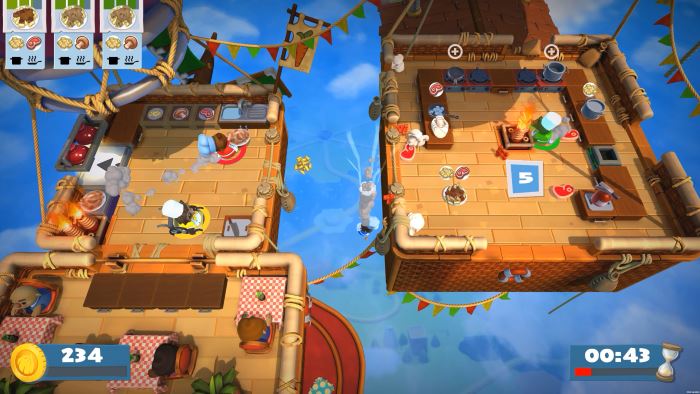 You can score big points in Overcooked 2 by delivering plates with food, but there’s now a new tip multiplier that activates as you deliver each recipe in the order that they’re received. The score bursts into flames and gets high very very fast, and this is a skill that you will have to master if you want to continue securing a three-star rating for later stages where just delivering plates with food won’t be enough!

As a cool new feature, and since the game now offers online gaming, you can emote at the level end screen, using the six different presets that range from “we failed miserably” to being able to congratulate the team for a job well done. I loved this extra touch, and I eventually emoted every time I met the level end screen, even when I was playing in single-player.

Along with the game’s Story Mode there is also a Versus Mode that will put two players in a kitchen with the goal of aiming at getting the best score possible so that you can defeat your opponent. The final option is Arcade Mode which is great for dropping into a quick game set in a random kitchen with a variety of recipes to complete that will always keep you on high alert – this is a great mode to play if you only have a few minutes to dive into the game. 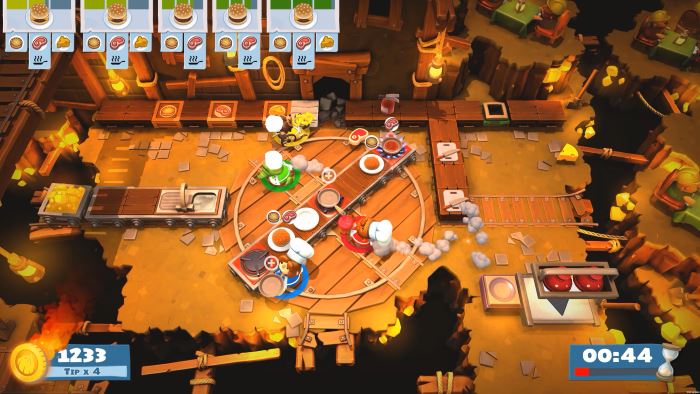 Final Thoughts
Like I mentioned, I loved and platinumed Overcooked, and I WILL Platinum Overcooked 2 as well thanks to the help of my daughter who’s been enjoying the game as much as I have. So far this year, this is my best couch multiplayer game I’ve played, and I definitely recommend that you to purchase this game, so that we can eventually get an Overcooked 3!

Want to read more about Overcooked 2? Then check out the official A-Z on Team17’s site, its a good read!

Disclaimer
This Overcooked 2 review is based on a PlayStation 4 code provided by Team17.

PlayStation Plus For August – PS4 Edition