You are the world’s only hope of driving back the alien invasion. Can you save the world? If you’re up for the task, be sure to read our Mugsters review!


Although there is no story mode per se, the idea is, as mentioned in the intro, you’re Earth’s last hope of repelling the alien invasion and saving your fellow human beings that are trapped inside capsules on islands. From the island that serves as a hub world, you’ll be able to set out to 25 different islands that unlock gradually as you progress, and each one will have three objectives for you to complete. Fear not, as said objectives can be completed over multiple replays of the island, so it’s not necessary to complete them all in a single shot. 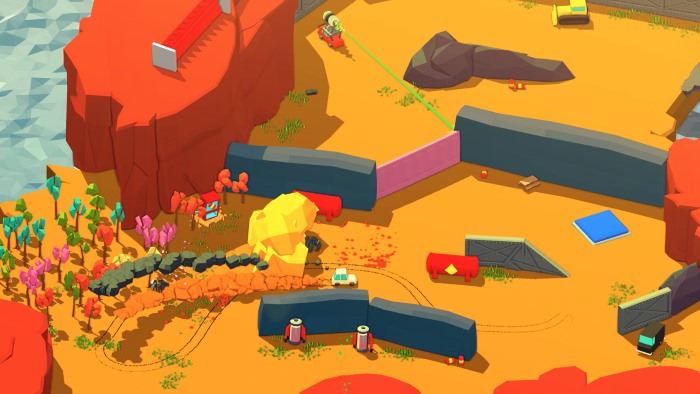 Two objectives will always be present on all islands. The first one is to save captured humans, for which you have to use something to break the capsule’s glass and have them follow you without dying until you leave the island. The second recurrent objective will be to gather crystals, that can be anywhere from right in the middle of the island to places where you’ll have to find a way to get in. The third objective, which is actually the main objective, will vary from island to island. Sometimes you’ll have to destroy something precise, other times you’ll have to find an object and combine it with another one – the objective is never the same. And once you’re done with your “run,” all you have to do is find the plane that’s somewhere on the island and fly off!

To do all this, you’ll have access to a basic set of actions you can do. Running and jumping is a must, as the terrain on the islands is always full of rocks, gaps, and falling bridges to make all that Earth-saving process more challenging. You’ll also be able to throw some punches to defend yourself from aliens and pick up a few objects that can be thrown, including exploding barrels. This is where the fun really begins, as you can pretty much throw those at anything and they will explode! If there’s a wall blocking your way, no problem, since you got that barrel to open up a door! You’ll also be able to drive some vehicles, which can also serve as explosives if you jump off of them and let them collide with whatever was in front of you. 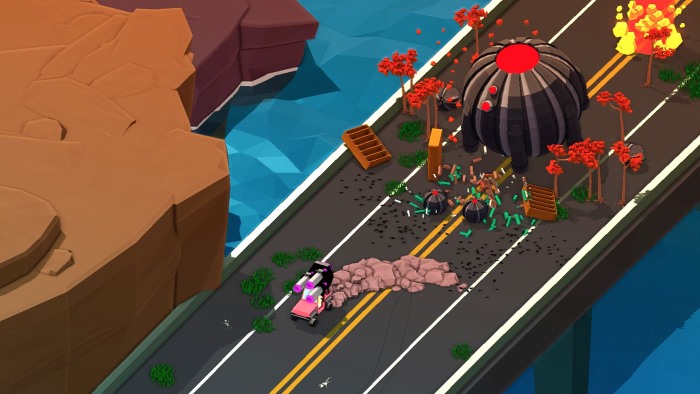 Speaking of explosions, they are a blast (pun intended) to look at in the minimalist visuals the game has to offer. The sound effect they make also really gives the impression of how something big just blew up. The color palette the game uses makes for a visual presentation that makes it easy to see what’s what, what can explode, and what’s bad for you – and what’s really bad for you.


After a couple of minutes playing I was already having fun with the game, mainly because of the explosions. I was slowly making my way around, picking up crystals and humans in what felt like a walk in the park. But as you progress through the islands, more stuff keeps coming up to make the game gradually more challenging. Aliens obviously start appearing, each with their own way of causing you harm, or to the humans you just saved! And it’s worth noting that while the first ones are pretty much your size, you’ll eventually see some much bigger ones you won’t want to mess with. 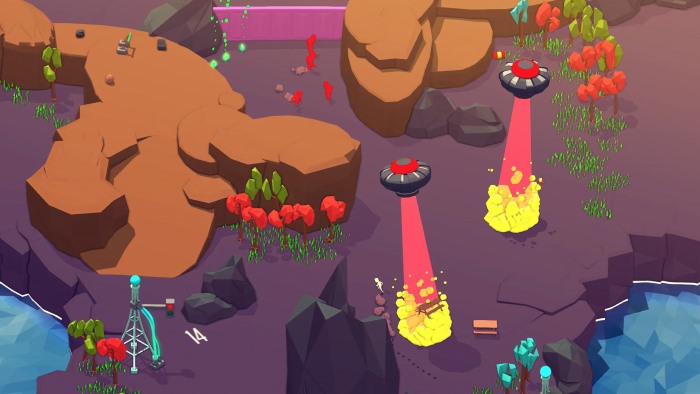 Apart from those aliens, islands will also become more sophisticated as you progress. Some switches will appear that open doors, and with some of these, you’ll have to get creative to be able to hit them. Some will be pressure sensitive, so you’ll have to find something to drop on them, while others will just need you to lock them in their position to hold a door open. The more you progress, the more those kind of twists will have you treading carefully in order to survive.

After completing all the objectives on an island, I also noted that they could be replayed in a time trial mode in which you basically have to make it to the plane in the shortest amount of time, with no humans to save and no crystals to pick up. I’m not much of a speedrunner myself, but I found the feature really nice since it adds some replay value to the game, as there are many ways to create a path to get to the plane. This also includes an online leaderboard to see how you compare to other players around the world, but I did find it odd that I had to quit my game and go to the main menu to check it out. 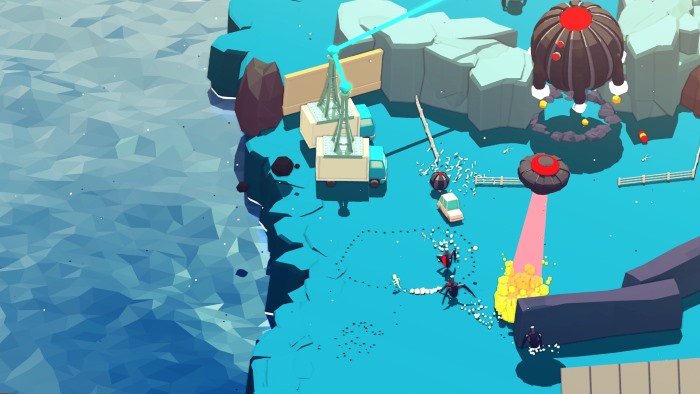 And luckily for us, those time trials don’t interfere with the potential of getting the Platinum trophy, as you only have to set a time on each island, without having to beat a specific time. Other than that, if you get through it all and make it to the end of the game, the big shiny Platinum trophy shouldn’t be a challenge to obtain, as you just have to complete every objective in every island. You also have to complete them all in some couch co-op multiplayer, so be sure to grab a friend or family member to join in on the fun!


Final Thoughts
Reinkout Games have created a pretty fun and unique experience with Mugsters. The concept and objectives are simple, yet challenging at times as you’ll have to test out every way you can to get to your objectives. It’s one of those games that you start playing without any expectations, but end up spending hours on it because it’s incredibly fun and addictive. I’m happy that Team17 helped to publish this game on PS4 since it’s a blast!

Disclaimer
This Mugsters review is based on a PlayStation 4 copy provided by Team17.