The Messenger from Sabotage and Devolver Digital is a love letter to the classic games we grew up playing back in the day – and a must-have Nintendo Switch release. Learn more about it in our The Messenger review!


In The Messenger you take on the role of a Ninja in training, who is part of a clan that is basically waiting for the end of the world… or something. And then something happens: a nasty, deadly and huge demon shows up, starts to kill Ninjas and burn stuff up, and is pretty much ready to end humanity once and for all when the prophesized Western Hero shows up to save the day. The aforementioned Ninja then gets a scroll that is very important, because reasons, and he is tasked with taking it with him to a specific location. Got it? 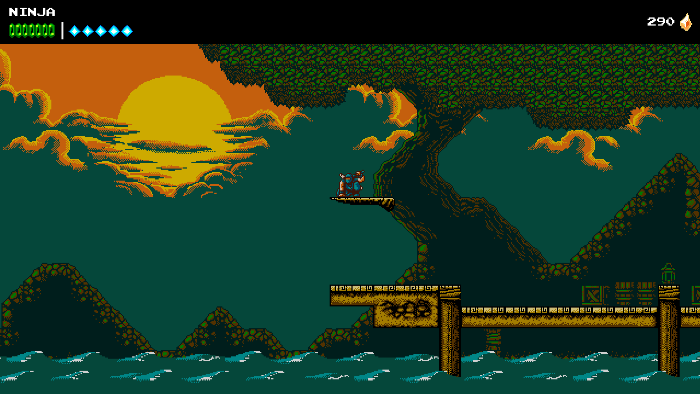 You will take on this quest by running left and right, jumping, slashing, swimming and climbing your way through each of the game’s diverse stages which hit all of the themes you’d expect from an action platformer – you know, fire, ice, underground, the sky, etc. The game pays homage to the classics most of us grew up playing back in the day on the Nintendo Entertainment System (a.k.a. the NES), games such as Ninja Gaiden, the first Teenage Mutant Ninja Turtles game, as well as a hint of Mega Man and Castlevania, while adding some 21st century refinements. 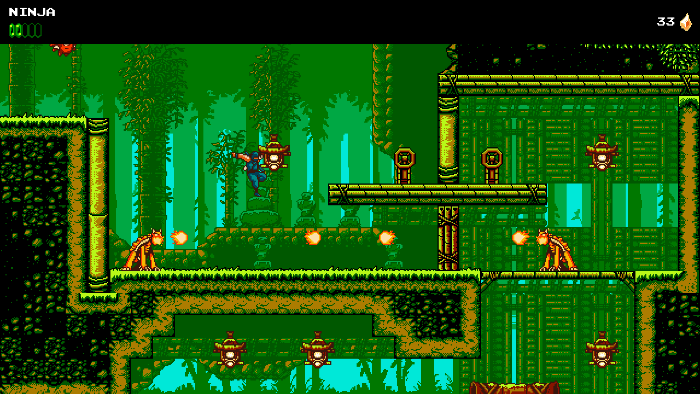 The main gameplay mechanic is your Cloudstep, a skill that allows you to jump again after jumping, as long as you land a hit on a lamp or an enemy while in mid-air. This will make it so that you traverse through some very interesting platforming sections, and the ability will also play an important part when you’re battling one of the many bosses you will encounter. As you progress you will also gain access to a Wingsuit that allows you to press and hold the B button to open it up and glide down, as well as a Rope Dart that can be used by pressing the A button so that you can attach it to rings, lanterns or walls to send you flying in said direction – and it also works on enemies!


As you explore each of the levels, you might find some hidden areas that at first seem to be a bit out of reach, but with some clever use of your abilities, you’ll be able to get there. These hidden areas have either a large crystal shard you can break into smaller pieces, which is great since these crystals act as the game’s currency, or a green Power Seal, which looks like a large green coin. These Power Seals are the extra collectible you can search for, with the promise of being able to open a special chest when you collect them all. 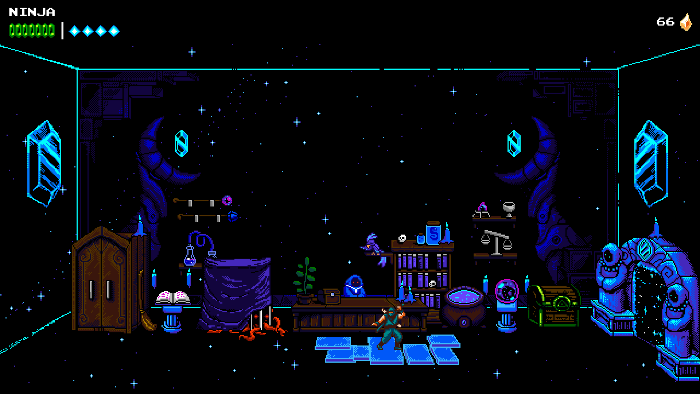 You’ll learn this when you visit the merchant, which you can access by entering the magical doorways that also save your progress. The merchant will offer you a variety of skills and upgrades for your character, adding things such as extra hit points, a limited use shuriken you can throw from a distance by pressing the X button, the ability to destroy enemy projectiles so that you can Cloudstep after that, an underwater dash so that you can quickly swim through these aqueous sections, being able to attack while using the Wingsuit, and more. The merchant can also offer information on the level you’re currently completing, on the stage’s boss, as well as offer some funny banter and a humorous story which changes for every stage you progress through. Oh, and be sure to check his cabinet since he loves that. 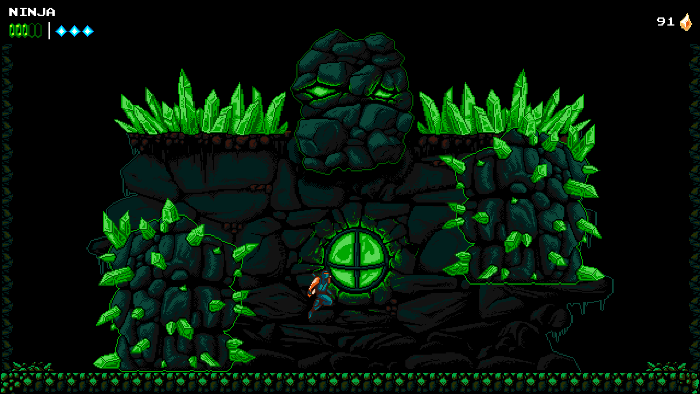 If you die, which will happen a lot as you learn a level’s layout, enemies’ movement and attack patterns and what a boss can and can’t do, you will be revived at the last checkpoint by Quarble, a red flying demon that will charge you for its services. Every time you die Quarble will eat up all the crystals you would otherwise have collected, up until you’ve paid for its revival fee. This, as Quarble tells us, takes the place of the lives and continues system – or password for some games! – which you would have found in games from 30 years ago. 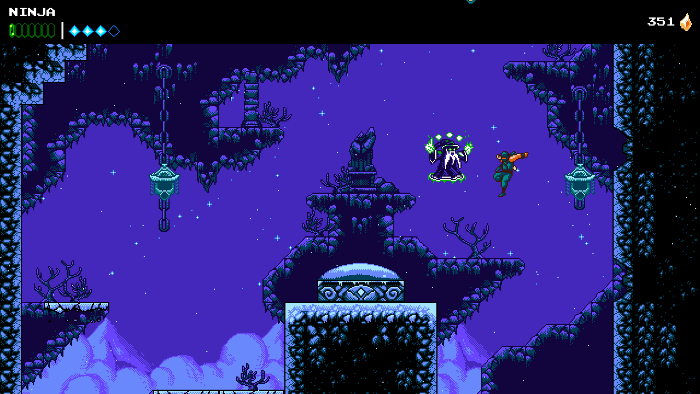 You will take on a series of linear stages that ask you to get from Point A to Point B, collecting crystals and defeating hundreds of enemies along the way, until you get to a point where your skills will be really put to the test, and once you manage to overcome the trial… you will travel to the future! This will change the game’s “late NES era but without any slowdown or flickering” 8-bit look for a 16-bit upgrade with detailed backgrounds, as well as a 16-bit soundtrack that will remind you of what the SNES and the Sega Genesis and its FM synthesizer could do. 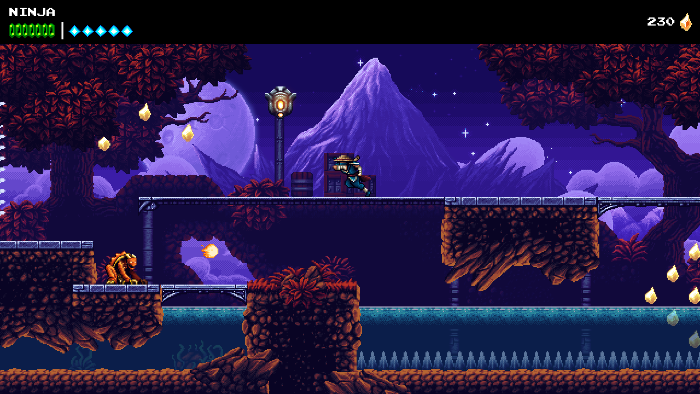 After taking on some extra levels you will finally reach the final boss, and after some stuff that I won’t spoil here, the previously linear 2D action platformer will turn into a Metroidvania! Stages will open up, with new paths and extra areas, as well as adding portals you can cross to change between the game’s 8-bit and it’s 16-bit versions. Some areas might be missing platforms in the future, or a path might have opened up which was previously closed in the 8-bit version of said location. The merchant will also have new upgrades and abilities for you to purchase, as well as offer hints for what I think is a rather high price so that you can complete the objectives that will lead you to the end-game run. 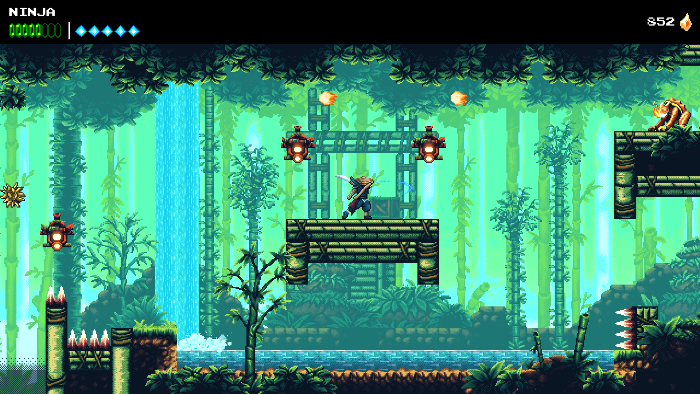 The Messenger is an excellent indie release that has found a good home on the Nintendo Switch. I spent half of my time with the game playing on the TV and the other half while in Portable mode, and the game looked just as great and was just as fun in both scenarios. A short game this is not, since you’re looking at 20+ hours to 100% this release between the first part of The Messenger, the jump to 16-bits and the Metroidvania twist. You’ll meet former foes who have turned a new leaf and old enemies with a new look as you try to defeat the greater evil behind all of this before it is too late, and you’re going to have a blast doing so. 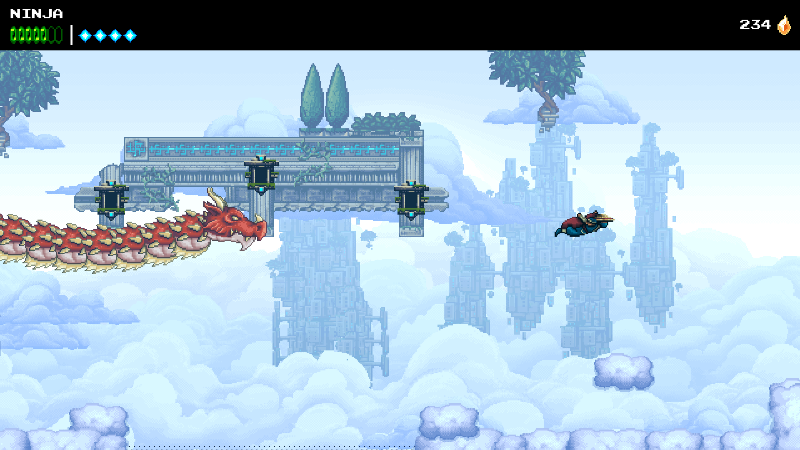 Disclaimer
This The Messenger review is based on a Nintendo Switch copy provided by Devolver Digital.