Bomb Chicken from Nitrome is a colorful and fun 2D platformer in which you control a character of the Gallus gallus domesticus variety that can’t jump, but which can lay bombs. Learn more about it in our Bomb Chicken review!


A 2D platformer in which you can’t jump is certainly a different type of platformer, and it’s one that definitely works on Nintendo Switch. The chicken you control can lay bombs, and said bombs can be used to form pillars that can allow you to gain some extra height so that you can reach the exit of each stage. A bomb or two usually gives you enough of a height boost to clear most small obstacles, but sometimes you’ll need to have quick thumb to lay several bombs so that you can get high enough to, say, be able to fall on top of a flying bat so that you can bounce towards an out-of-reach platform… before said bat crashes onto your pillar of bombs, thus setting them off and killing you in the process. 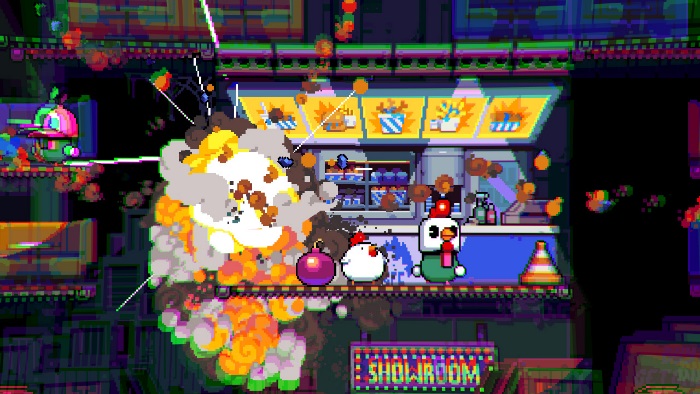 Speaking of that, you start with a small set of lives, and every time you die, and trust me you’re going to die a lot in this one, you’re sent back to the last entry point to the room in which you died. Every room acts as a new checkpoint, so the more lives you have, the easier it will be to complete each stage. If you do run out of lives, then it is game over, but worry not since a lot of the things you’ve managed to do before said game over will continue to stay as is so you don’t have to do them again. 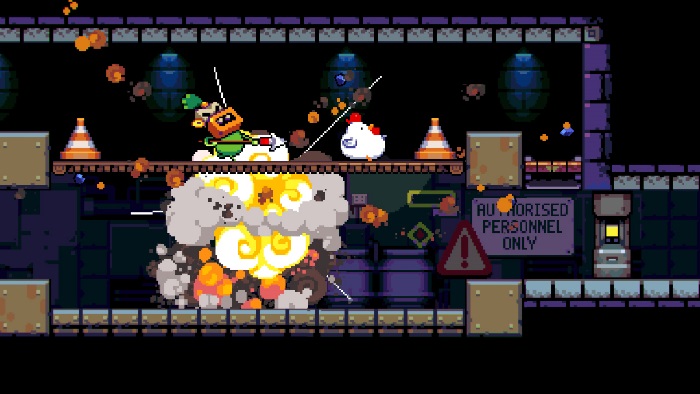 What does this include? Well, you can collect blue gems in each of the game’s stages, as well as grab key cards that will allow you to open doors. There are also some treasure chests you can open for some extra gems to add to your collection, and they will also remain as “collected” after you get a game over. This means you can 100% a stage in a handful of minutes during a second run if you ended up dying close to the end after collecting every single thing up to that spot. On that note, be sure to pay attention to the walls in each area since some of them have spots you can blow up with a bomb or that are actually “false walls” of sorts that lead to secret rooms with extra gems you need to collect.


Gems are very important since you can use them between each stage as payment to a giant chicken statue, and you will be rewarded for said offering with an extra life. The cost of each extra life goes up considerably after you’ve bought three of them, but they’re worth the effort of searching high and low for all the gems in each stage since extra lives greatly speed up the whole process since you will get fewer game overs and will be able to retry tricky areas, especially during the second half of the game, so that you can find the right way to get to the end. The game eases you into each new stage by giving you infinite lives in the first room of each level so that you aren’t surprised by the new enemies or hazards introduced into the mix. 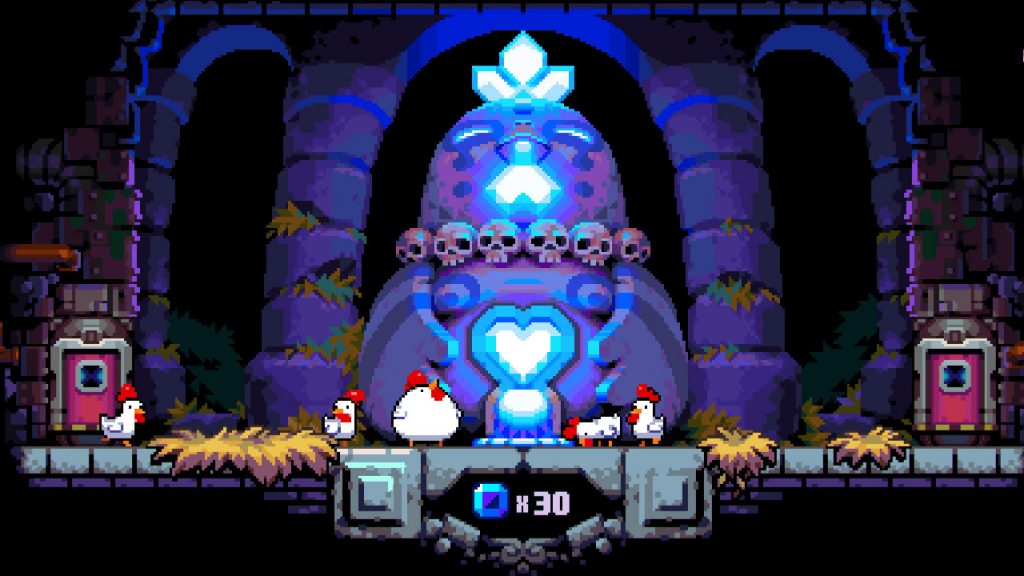 Going back to your bombs, you can lay them down and then kick them towards enemies, breakable walls or hazards to destroy them. Bombs can also be used to hit switches that are out of your reach, and they also do a great job at helping to activate sensor plates… you know, at least for a couple of seconds before they go boom. There are a couple of spots in the game where you’ll need to juggle using bombs to defeat enemies while also using other bombs to hit a few switches to open the way to a spot you will need to climb to with a pillar of bombs. It’s a tricky combo with a very specific timing to it, but by then you’ll have learned everything you need to make it work. 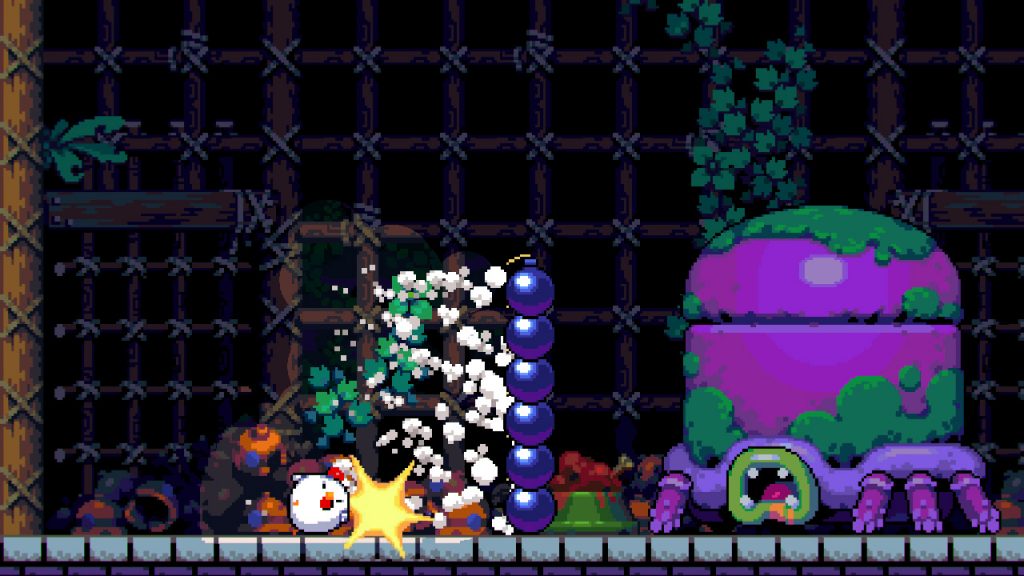 There are only a couple of bosses in the game, and you will need to learn what their movement and attacks patterns are so that you don’t end up getting game over after game over. If you pay attention and have some patience, they’re not going to be that big of a challenge… but if you rush into things, you will be dead within seconds of starting the fight. There are only two bosses in the game, so definitely take your time to learn what you can and can’t do with your chicken and your bombs! 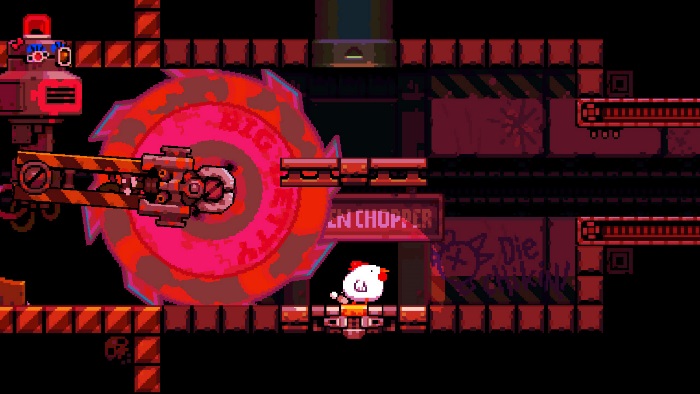 Bomb Chicken is a very fun release on Nintendo Switch that I highly recommend. It’s clever and does things differently from other platformers on Nintendo’s hybrid console, and the art style, enemy design, the setup of each stage and the difficulty curve are top notch. The game might be short, with around 3 to 4 hours of content if you want to 100% it, which might rub some of you the wrong way with its $14.99 asking price, but trust me, it’s worth every penny since this one is all killer no filler. 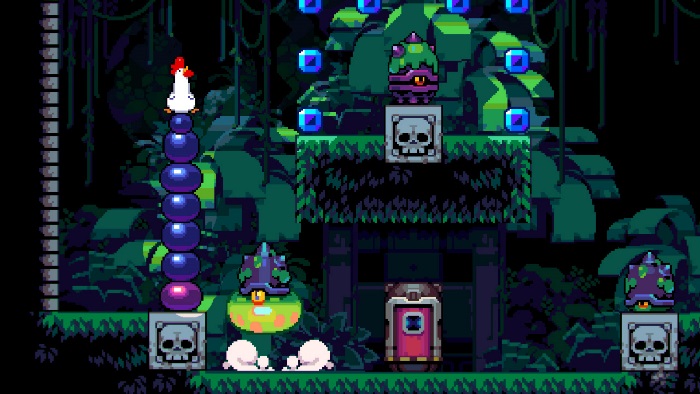 Disclaimer
This Bomb Chicken review is based on a Nintendo Switch copy provided by Nitrome.

Super Life of Pixel Out On PS4 On August 22