Slime-san is finally on PS4, a bit over a year after launching on Nintendo Switch. We’re now getting the definitive version with all extra content and then some! Learn more about this great platformer in our Slime-san: Superslime Edition review!


Slime-san was minding his own business, sliming around in a peaceful forest when suddenly… A giant worm appeared and gobbled him up! Now deep within the worm’s belly, Slime-san has to face a decision: Be digested by the incoming wall of stomach acid…

The main campaign’s story is a simple yet odd one: You’re a slime, and you’ve been eaten by a giant worm. Your choice is pretty simple since you either let yourself be digested or quickly crawl out of there! The second option will obviously be the one you take, and while navigating the inside of the work, you’ll meet up with other characters who’ve also been swallowed… and even a city that serves as a hub world for the other stuff you can do in the game!

Getting out of there will be simple yet challenging. Each of the levels is divided into four parts, and the objective is always the same; get to the end. Slime-san can jump, dash and morph, which allows him to get through the green-colored stuff in the levels. There’ll be some red objects lying here and there, which you have to avoid as they mean death for you. One hit is all it takes, so when you die, it’s back to the start of that part of the level you are in.

Each level has an apple you can collect, which can be used in the city to purchase stuff such as different skins for Slime-san, or even to allow you to buy a level-skip (but that will prevent you from buying everything there is to buy, so don’t do it if you want 100% completion). Another aspect of the levels is that there is a timer with a “trophy time” objective, and you must try to complete the four parts under that time. Even if you don’t want to give those times a try, you’ll still have to progress at a steady pace through each stage since there’s another timer to be aware of, and once this one is depleted red stuff starts rising (or dropping if you’re going down) in that level ad it will kill you as soon as it touches you.n 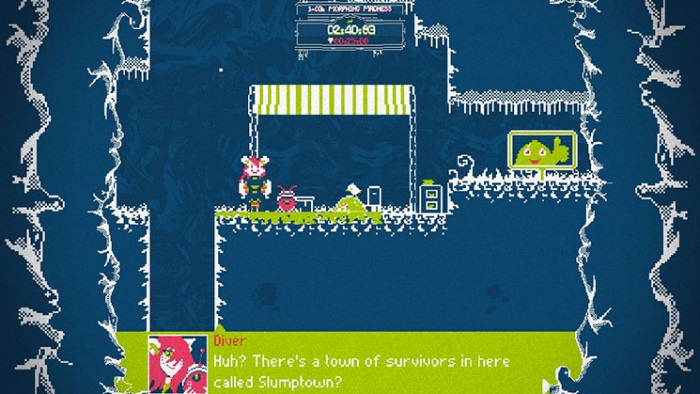 The other campaigns in the game all offer a similar gameplay experience, but with a little twist here and there to avoid being just a repetition of the main one. As for the city, there’s a lot of stuff you can do in there, like tutorial and challenge levels, shops to buy skins, and more. I found the city close to impossible to navigate, as the limitation in the colors in this game made for a very cluttered environment, and it quickly became hard for me to know where I was going and even I was.


This brings me to the visuals of the game. The first thing to know is that for colorblind people, there are some options available to adjust the game to be able to enjoy it so the green and red stuff can actually be visible for them. Apart from that, the game is mostly a combination of white, dark blue, green and red in some kind of low-resolution visuals that can feel like they come from before the NES era of consoles. It’s definitely an interesting look, but I found myself unable to play for long periods (more than an hour) because my eyes became tired. As for the soundtrack, it’s a nice collection of chiptunes that’s really enjoyable to listen to and that really gets you going in the game.

There’s also a loooooot of replay value in here, more than a big bunch of games out there today. There are many levels to play between the main campaign and the DLC campaigns that are included with the game right for a start, and you can also go back to previous stages to collect the apples you’re missing as well as to beat the trophy times, which will require a lot of extra runs Then there’s the fun minigames that are included, a New Game Plus mode, speedruns, boss rush mode, so you should be sliming your way with this one a long time. At $15 for all that content, it’s a steal, as some AAA titles don’t even offer half the content and replay value this one has! 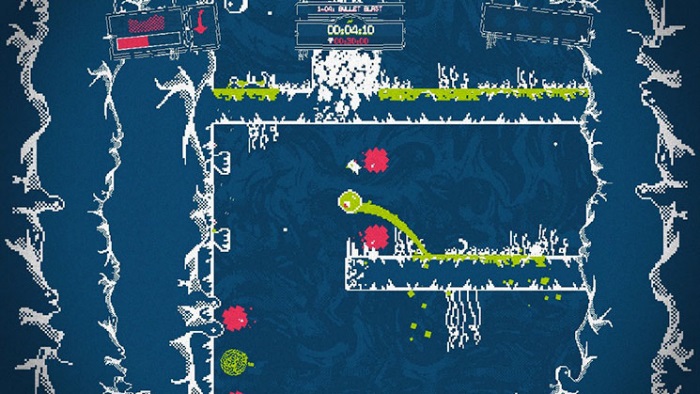 And naturally, with a difficult platformer comes a difficult trophy list, and this one is no exception. To put it simply, you have to finish all the levels in normal and new game plus, collect the apples in them, and beat their times. And then you have to do pretty much the same for the extra campaigns, and purchase all that extra stuff in the city with all those apples you collected. Brace yourself, as this Platinum is not an easy one!


Final Thoughts
If you’re into difficult platformers, then Fabraz and Headup Games have made a perfect game for you with Slime-san. If it weren’t for the fact that it tired my eyes so quickly, it would’ve made it in my must-play titles. There’s a lot of content to enjoy, the challenge is there, and all the extra stuff included with the Superslime Edition makes it an even better bundle that’s more than worth playing. 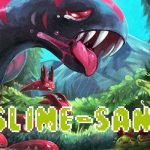 Disclaimer
This Slime-san: Superslime Edition review is based on a PlayStation 4 copy provided by Fabraz.

The Caligula Effect: Overdose Hits Switch And PS4 In 2019