Monster Slayers is a deck building roguelite adventure in which you’ll fight hordes of monsters in various dungeons using a card system. Intrigued so far? Read more about this game in our Monster Slayers Review!


Monster Slayers is a rogue-like deck-building RPG adventure with an innovative card-based battle system that lets you customize a deck to suit your play style. Create a hero to join the Monster Slayers Guild and choose your path through the perilous Northern Valley as you follow your quest to defeat the legendary Harbinger and become a true Monster Slayer.

This is a double review for Monster Slayers. The game was played by EdEN and Ceidz. This review presents what they both had to say.

As you begin, you’ll have to select your hero from a list of the different available classes, each with their different specialties and perks. Once you’ve chosen the class, you can proceed to fine tune the character appearance and its name. Being a roguelite release, it’s stated you should not put too much effort into its appearance because the character will die. And yeah, you’ll definitely lie in this game, so it’s good that the game makes it very clear from the start, right?

The gameplay of Monster Slayers is relatively basic and is well explained by the beginning tutorial. It’s a kind of turn-based game based on your deck of cards. You have different cards in your inventory, and your objective is to destroy the different enemies or go through the various events. At first, you won’t be familiar with what each card in your deck does, but luckily you’ll be able to tell what each one does as you hover over them during a battle, allowing you to get the hang of things as you select the ones that best suit your particular predicament. 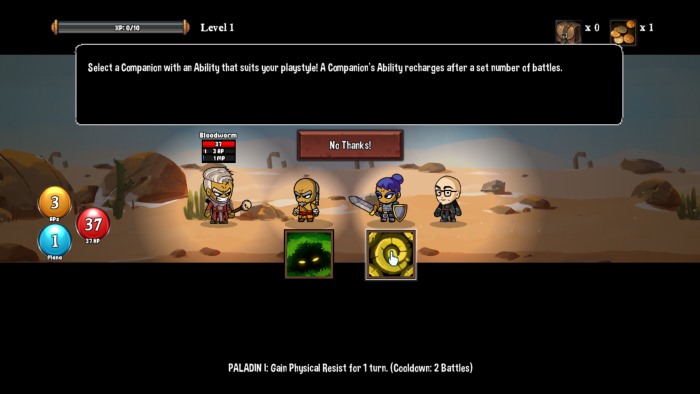 When I landed on the map the first time, I was surprised that the default option was to DELETE my save file. As I progressed, however, I noticed that this is a major issue throughout the entire game, as I needed one or two button presses to find my cursor and align it to the most logical choice. This felt as if Monster Slayers was designed to be played with a mouse, and that controller support was added at the end to be able to release this one on PlayStation, which, let’s be honest, is far from ideal for a console game.

All in all, I did like playing through Monster Slayers in the different runs I did. The difficulty is well balanced, and it’s clear that if you die in battle, it’s totally your fault and not the game being unfair. This one is fun and a welcome addition to the PlayStation 4! 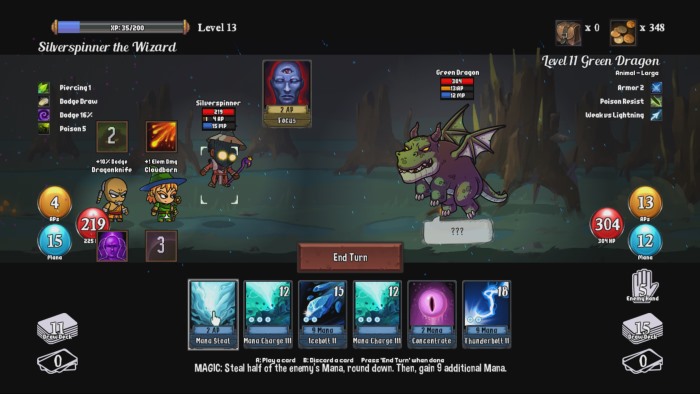 At first, you can select between a Dragon, Rogue, Ranger, Knight, Barbarian, Cleric, Wizard and a Merchant. Of note is that each class has some cards tied to it not available to the rest, except for the Merchant who starts with a smaller deck but can access cards from the other six regular starting classes. The six classes are self-explanatory, and then there’s the Dragon who is very powerful but has no weapons or armor… although it does have access to elemental damage for each attack, and you can toggle its skin tone to set the elemental type of said attacks.

I started with a Knight, as one usually does in most RPG, since it was a balanced class with melee attacks, great at blocking damage, while also offering counter attacks and anti-magic abilities. After my experience with the game, I suggest you also do your first run with the Knight so that you can get used to things. You’ll then get to select your hero’s name, gender, voice style, skin tone, hair style and hair color, or can hit the Randomize button to have the game give you a random mix of all options for a new character to use. 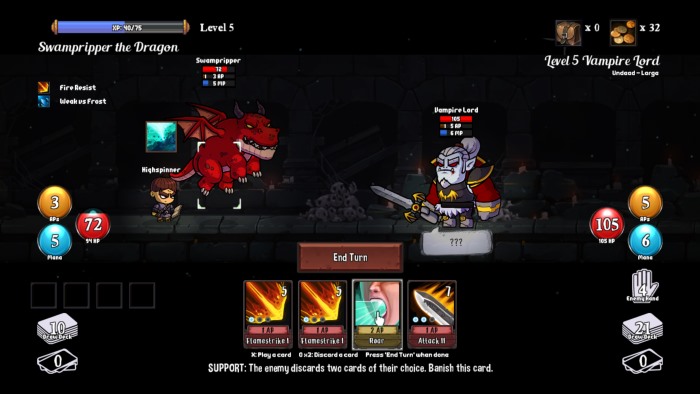 You’ll then learn that the Monster Slayers’ Guild is in charge of investigating thought the empire, discovering many of its secrets. It turns out the guild has discovered ancient stone tablets with mysterious glyphs which could hold valuable information. The guild decides to send you to the Northern Valley to search for more of these tablets. Your quest requires that you slay three Legendary Monsters to return to the guild as a true Monster Slayer.

Each dungeon you visit is laid out on a map made up of small blocks, and you must visit each one to take on whatever event is set on it, from defeating this or that enemy to finding a campfire where you can rest, a chest you can risk opening or leave as is, a merchant from which you can purchase items or pay to have one of your cards upgraded, or a boss battle, to name some of the examples. You’ll also learn how much experience you will get if you manage to survive a battle and vanquish your foe, which is definitely helpful since you can plan accordingly and take on a battle that can yield enough experience to level up before taking on a more difficult fight.


Leveling up will allow you to obtain a bonus for your character, which could be a boost to its action points, to its hit points or to another stat, getting the chance to upgrade one of the cards on your deck, grabbing an item that could be very useful on your adventure, or adding another card to your deck. You can also get additional slots in your hand so that you can move up from having only three cards to select during your turn, and let me tell you that having some extra cards in your hand definitely makes a big difference! 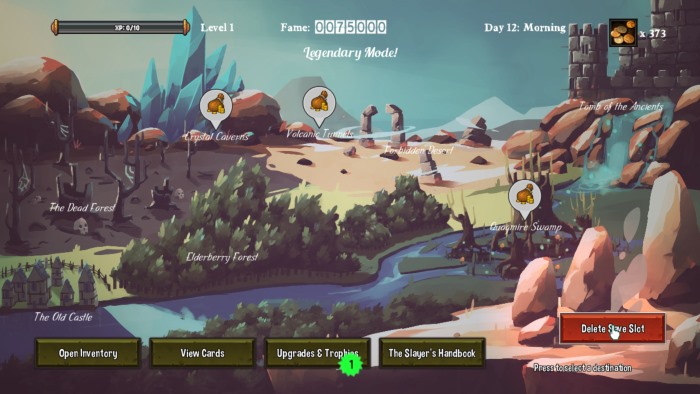 When you die, and this will be fairly quick in your first set of runs since you’ll still be learning the basics and what you can and can’t do, you’ll notice that you can start a new game and use the points collected in each game to get some permanent upgrades for the different characters. This is how you make progress by slowly but steadily building up your characters, and it is why you’d call this one a roguelite and not a roguelike, since the second type of game is certainly not as forgiving!

The trophy list for the game is interesting since if you want to get this Platinum trophy, you’ll need to finish the game several times, once with each of the available classes. This might seem very easy and straightforward, but you will later realize there are extra classes to unlock as you play, which must also be used to complete the game. Then there’s the fact you’ll need to complete the game at least once in Legendary Mode, which is harder than the usual run…. no, scratch that, you’ll also need to complete the game in Legendary Mode with all 12 classes (the six starting classes and the six additional classes). The other trophies are for completing the tutorial, reaching level 15 with a hero, and for having a hero reach 200 hit points.

Final Thoughts
Monster Slayers is a good and fun dungeon crawler with a card twist that makes this one feel interesting during the many runs you’ll need to do – at least if you want to add a new Platinum trophy for your collection! There are many classes to play as, several cards to upgrade and many options of how to build up your characters in subsequent runs, so you’ll definitely find something to like as you try and make it to the end to bring peace to the realm.

Disclaimer
This Monster Slayers Review is based on a PS4 copy provided by Digerati.