Like I mentioned in the introduction, I Hate Running Backwards is set in the Serious Sam universe, and the first thing you’ll do is select your avatar from the few characters available, like, say, THE Serious Sam, or Dancing Denzel (my definite favorite). I also mentioned being a die-hard fan of the franchise, and I played The First Encounter and The Second Encounter countless times in LAN parties. On that note, this game felt like the type of arcade experience I’d be looking for…

One of the key factors of this game is its originality: I’d never played a shoot ’em up from the “reverse” side before. This is indeed a great idea and sums pretty much the title of the game since the characters we’re controlling are running backwards. As soon as I begun to play, I was confused by the gameplay, and you’ll probably be too. Since the characters are running backwards, and starting in the lower part of the screen, you have to move quickly to the upper part of the screen to evade the different hazards. Once this is done, your first reflex will be to try to control this game like if it was a twin-stick shooter, but in fact, the weapons are used with the R2 button, like an FPS.

In a true Serious Sam fashion, the gameplay is hectic, and the enemies returning from the games in the main franchise, like the kamikaze or the werebull. The power-ups are often out of your way, so it’s a risk vs. reward scenario, which felt appropriate. What I don’t like about the game, and the factor that made me drop it after a few hours of gameplay before returning to it the next day, was its difficulty. You start with a few heart containers (which varies depending on the character you select), and each hit depletes one full heart. It was a true challenge reaching even the first boss! There is a “baby mode” which is, in fact, the easy mode, which greatly decreases the enemy count, but I didn’t notice any difference in the boss fights.


There is an option for local co-op, which I loved at first since I enjoy playing in local co-op but, as I mentioned, the difficulty of this game was too high for my friend who wasn’t able to keep up with me so, I ended up playing alone after only a few matches. There are daily matches available in which you must get the farthest you can, and your score will be registered to be compared with other players. It’s exactly the same as with the regular campaign, but the scores are uploaded to the global leaderboard, so everyone will know how quick you can die!

Final Thoughts
I was sad that my time spent with I Hate Running Backwards wasn’t as fun as what I expected it to be. I really love the Serious Sam franchise, but this time, taking things into a shoot ’em up gameplay, and cranking up the difficulty to eleven… well, this game is definitely not for everyone. I Hate Running Backwards looks great and there’s a ton of content to play… if you manage to survive that long! 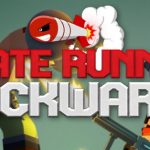 Fun game that could have been better

Disclaimer
This I Hate Running Backwards review is based on a PlayStation 4 code provided by Devolver Digital.