Are you ready for a tower defense game? As Tikiman you must protect the 20 Chibis by building towers along the different paths to defeat the waves of enemies, enemies that come by ground or air. Interested so far? Learn more about it in our PixelJunk Monsters 2 review!


This is a double review for PixelJunk Monsters 2. The game was played by ThaRaven403 and Tracey. This review presents what they both had to say.

In PixelJunk Monsters 2, there are three types of towers that can be built to either target ground units, air units, or both. While the ground or air towers are pretty efficient against their specific enemy type, they can’t do anything against the other type, so you’ll have to plan carefully as you set them up along the paths to be able to fend off all threats, either by alternating between the two types or by using the towers that can attack both (although they are not as strong against either one as the towers with a specific role). As you progress in the game you’ll gain access to more towers for each of the three types, thus adding some extra variety. 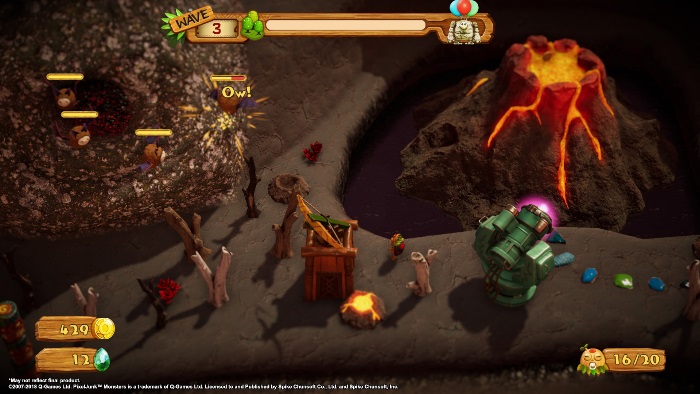 Those towers are obviously not free, since if they were then the game would be pretty easy. Each of them cost money, that you can gather from defeated monsters, from trees or by dismantling existing towers that you don’t use anymore. Some towers will also require gems to be built, and these are randomly dropped during the stages as you defeat enemies or as you move around the trees in each area. All towers can also be upgraded, whether it be from killing monsters, using gems on them, or by having Tikiman dance next to them for a few seconds.

And that’s pretty much it for how the game works: build towers to attack monsters, collect money and gems, upgrade and build more towers. Sounds simple? Well, it is… at least at the start! There is no tutorial level, so if you don’t check the text instructions that you can access in-game, you’ll have to lear the basics as you go. while the game is simple to pick up and play, it won’t be long before you feel the challenge coming at you after playing a handful of the available stages. 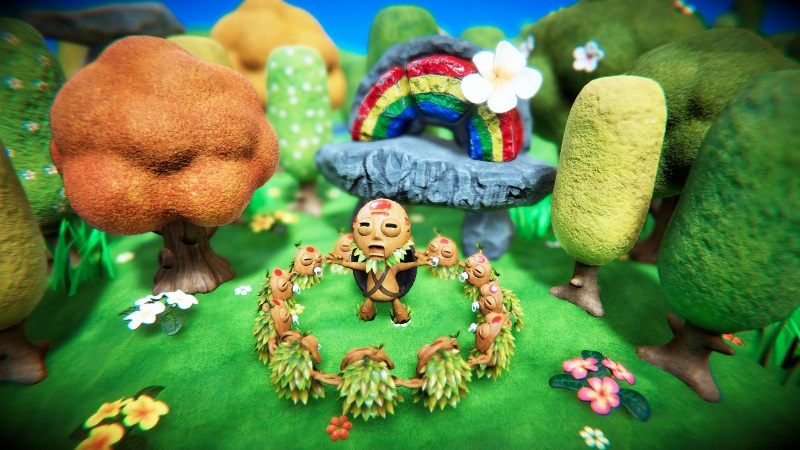 As soon as the third stage hit, I was already in panic mode when I realized I had forgotten to secure one of the paths to my hut and lost a couple of Chibis. Oh, and I was on the easiest of the three available difficulties (you unlock additional difficulties in each stage after finishing them). But even though it was hard, with non-stop action that you can’t leave for a moment, I kept marching forward because it was a very addictive and entertaining cycle!


And as far as the trophies go, anyone getting the Platinum trophy in this one will earn a ton of respect from me since this is a hard one! Although there are a couple of easy trophies that will just require some time and effort, such as getting enough tokens to buy all the masks and shells to dress up Tikiman, the real meat here will be to finish each of the 15 stages on all three difficulties without losing any of your Chibis – that’s 45 perfect runs. Doesn’t sound that simple, right ? It sure won’t be, but this is the type of game that is so addictive that playing it over and over again to perfect your runs will be a lot of fun! 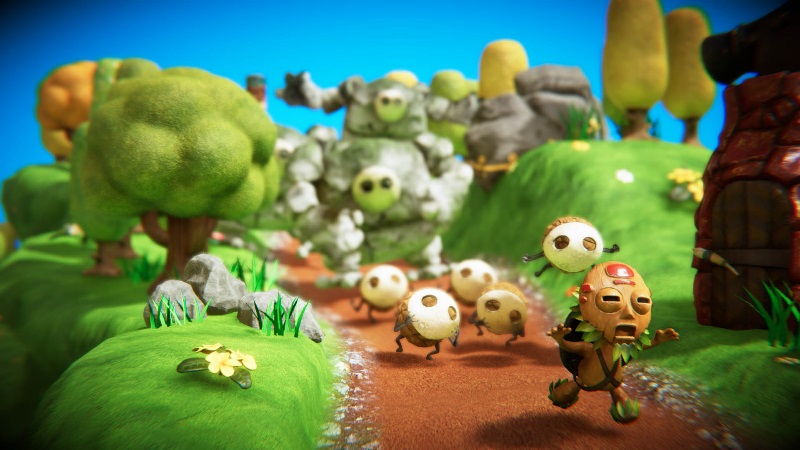 PixelJunk Monsters 2 is a cute and brightly colored tower defense game that is highly addictive, which offers two-player co-op or online multiplayer, where you can earn rainbow fragments if you can manage to perfect each of the stages you’ll take on. I thought that the online multiplayer portion was a bit cumbersome, so it may not appeal to everyone, but co-op with a buddy works fine, as does the single-player campaign.

You play as Tikiman who is in a spot of trouble, as an army of invading monsters plans to wreak havoc in this peaceful land. He must defend his Chibi villagers at all cost – they look like baby versions of Tikiman. So he sets out on his quest to protect them by setting up towers along the paths the enemies will take to try and wipe them out before they reach the base, and your job is to help him succeed. 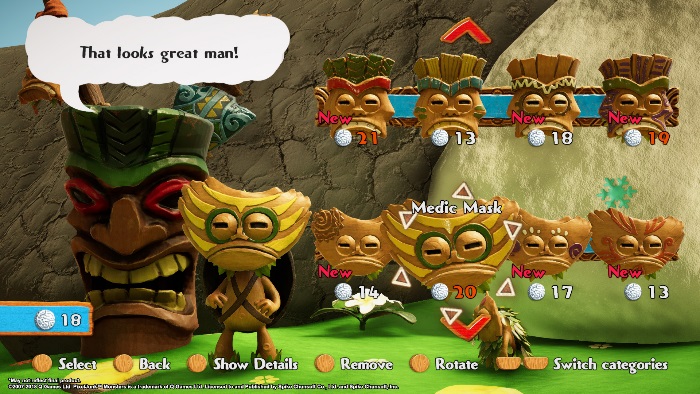 The maps are bigger than in the prequel which was a nice surprise, and there are plenty of options for where to place your towers. When you have progressed a few waves in a single stage, you will start to obtain gems at random, which allow you to upgrade your towers, and you will definitely need to upgrade as many towers as you can to prepare for the larger enemies and the deadly bosses, which are tough to take out.

Each tower can be upgraded up to level five, and each upgrade costs more gems than the previous level, but are worth it though as the amount of damage and the range of each tower increases every time you level up. It’s also worth noting that tower upgrades can also be activating by giving towers some extra experience by having Tikiman do a Tiki dance next to a tower, which I thought was quite a nice touch.

Something that needs to be mentioned is how great the game looks, since we’re now dealing with a game that has left behind its charming pixelated art style to give us a game that looks as if the team at Q Games had created some very detailed stop-motion models, set them in areas that look as if a claymation technique had been used. The attention to detail is great in this one, and if you want to check everything a bit closer you can zoom in the view from the top-down camera to a third person camera that puts you right behind Tikiman. 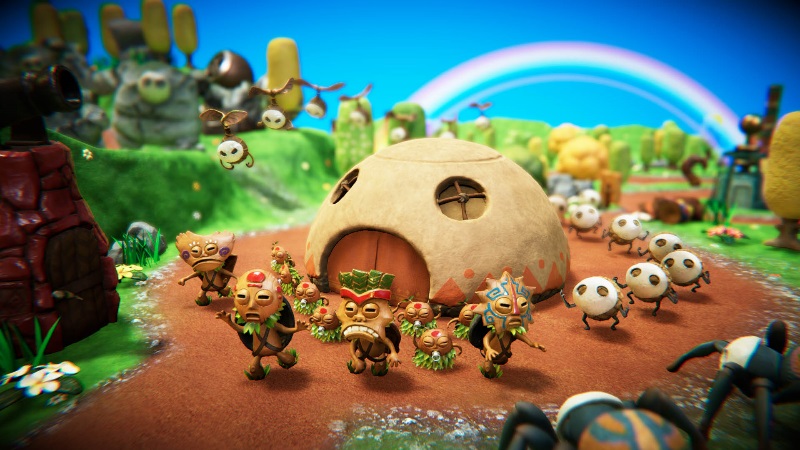 Final Thoughts
PixelJunk Monsters 2 is a ton of fun, and a very addictive tower defense release. We liked the colorful and vibrant graphics which are very easy on the eye. We liked the difficulty settings since it allows players of all skill levels to enjoy the game, which is great since this is a game that definitively needs to be in your to-buy list if you’re a fan of tower defense games. Happy trophy hunting! 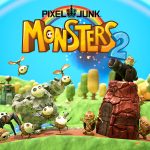 A simple, but hard and addictive tower defense game!

Disclaimer
This PixelJunk Monsters 2 review is based on PlayStation 4 copies provided by Spike Chunsoft.