We’re currently hard at work on a review for EVERSPACE on PlayStation 4, so we got in touch with ROCKFISH Games to talk about the game’s development for its highly anticipated release on Sony’s home console.

PS4Blog: Good morning! Good to have you with us at PS4Blog.net today. How are you doing today?

Good morning and thanks for having us here. Since Everspace is our first PlayStation game ever, we couldn’t be more excited. It is a tremendous lifetime achievement for us, and the team has been working really hard on making this as good as an independent and self-funded team can. I have spent lots of hours watching space game enthusiasts playing Everspace on various platforms on the show floor at events and on twitch. To see players getting super excited about something you have created from scratch together with your team is incredibly rewarding every time again. I think we have a really great product, and all of us are very proud of what we have achieved together over the last three years. Now, it is time to offer Everspace to space game enthusiasts on PS4, and we cannot wait to hear what they will say about it.


PS4B: Everspace is now available on PlayStation 4 on May 22. How would you describe the game to someone that has never heard about it?

The best punchline came from one of our fans even before we launched our tremendously successful Kickstarter in 2015. When we explained our vision of Everspace to combine fast-paced 3D space combat with roguelike game mechanics, while traveling in one direction from one procedurally-generated sector to the next until reaching the end sector and defeating the end boss, he said: “So, that’s like a lovechild of FTL and Freelancer!”

Frankly, I couldn’t have put it any better myself. Of course, this idea didn’t come out of nowhere, and it is worth mentioning that we had a really big hit with Galaxy on Fire 1 and 2 on smartphones and tablets with our previous studio. The series was heavily inspired by iconic space game classics like Elite, Wing Commander, and Freelancer. To make it work on mobile devices, we made it very easy-to-pick-up and threw players right into the action. We also kept game sessions short and didn’t bother our pilots with any travel times whatsoever. 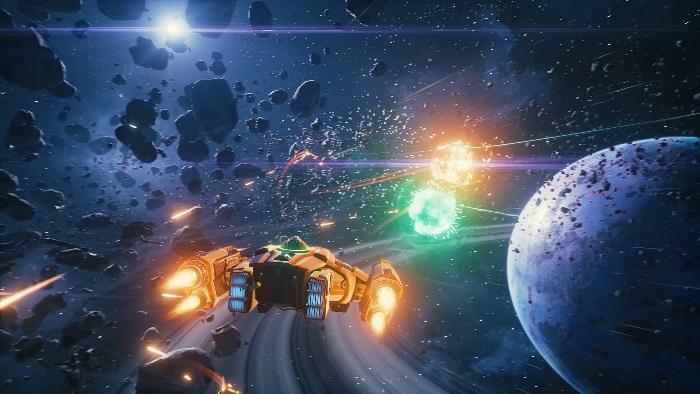 Now, for our debut on PC and console, we wanted to keep that arcadey approach to a space shooter and take its visual and audio experience to the next level. For budget reasons and to distinguish ourselves from the big space games out there, we decided to combine this first game pillar with a modern interpretation of a roguelike, inspired by iconic posterchilds of that genre like FTL, Rogue Legacy and Binding of Isaac.

Last but not least, we wanted to go even one step further by adding a proper storyline that fits the nature of a roguelike. This idea was born when our creative director and I went on a five-hour road trip from Hamburg to Malmö to attend Nordic Game.

Both blown away by the movie Edge of Tomorrow and its mesmerizing plot where Tom Cruise goes back in time after he dies over and over again, and each time getting a bit closer to defeating the end boss, we realized this is exactly how we could make a captivating story work in a roguelike space shooter.


Finding a convincing explanation why the hero comes back after each death paired with a solid mechanic for a continuous story progression didn’t take long. Surely, the hero being a clone space pilot with unlimited lives and an omniscient and cocky computer AI as his sidekick is nothing unheard of before. But, blended with a top-notch 3D space shooter and sophisticated roguelike gameplay mechanics, that’s definitely a first! 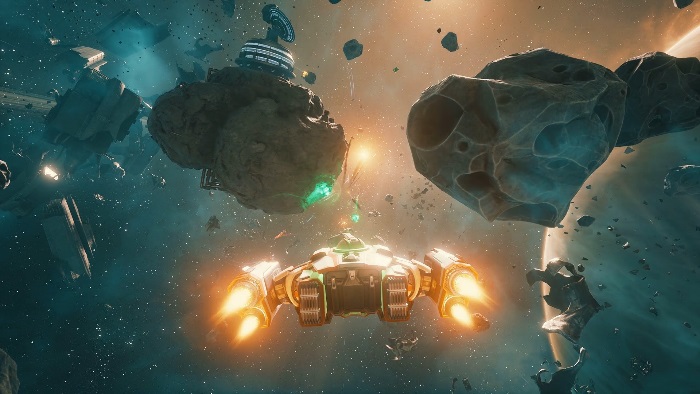 PS4B: How long did it take to develop the game’s PS4 version? Were there any particular challenges or hurdles you had to overcome?

Obviously, the PS4 version did benefit from our efforts in bringing Everspace to Xbox One early in the development process in early 2016. So, the heavy lifting like adapting the UI for playing a few feet away from your screen, getting the gamepad controls right and tweaking the performance was already done. Then there is the benefit of working with Unreal Engine taking care of most platform-specific requirements. Of course, we still had to invest several man-months into optimizing shaders on PS4 and fixing specific issues. But, in the end, the process has been pretty straightforward.

In fact, even if PS4 players had to wait a full year until Everspace being released on their preferred platform, they can now look forward to a very polished game that has been out on other gaming platforms for quite a while and having been improved continuously with fantastic feedback from our community. 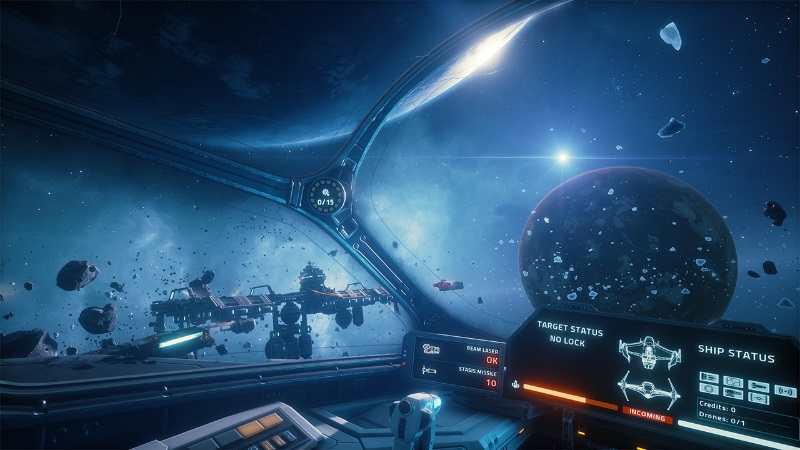 There are plenty, indeed! The full list is already available online as we started giving away promo keys to the press a few weeks ago. As a teaser, I’d like to highlight a few here.

The first trophy everyone will unlock is “Welcome to Everspace.” The objective couldn’t be any simpler: You just have to die! We put this in with a bit of our tongue in the cheek as you will die in Everspace. A LOT!

There are obvious milestones like reaching a certain point in the game, shooting down a number of enemies, or collecting all blueprints and such, too. However, my favorite trophies are the ones where you have to play Everspace in a different way. In fact, we put in all sorts of things in the game that will reward you with credits to upgrade your pilot or ship perks permanently.


PS4B: Aside from the Encounters DLC for Everspace, what are the plans for expanding on the content the game has to offer further down the line? Will additional content be offered as free DLC, paid DLC or a mix of both?

We have spent a lot of time and effort into creating such a massive expansion like Encounters which adds another 10 hours of gameplay to the base game. Of course, we still have plenty of ideas, but we feel that we reached our limits in adding new content and features in a meaningful and commercially reasonable way. Actually, it already wasn’t easy to come up with new ideas for another player ship, new weaponry, devices, consumables and enemies that offer a new and meaningful playstyle without breaking the balancing of the entire game.

That said, we might add new cosmetic content at some point if the demand is there and if is commercially reasonable. Bear in mind, the lifetime of a single-player game is quite limited, so we would rather work on a new game that all players will be able to enjoy. After all, implementing any sort of microtransactions is not our cup of tea, anyway. 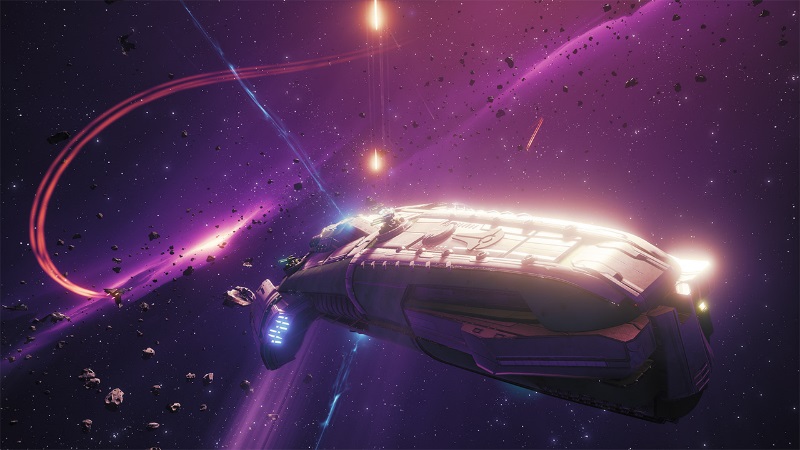 PS4B: The game is visually stunning. What were the inspirations behind the visual look of the game?

If you played Galaxy on Fire 2, you can tell that Everspace was created by the same team. We always loved fantasy sci-fi settings with vibrant colors and a space environment where anything is possible as long as it looks cool. So, we couldn’t care less about Newtonian physics in space and as long as our explanation for whatever is going on in space is fun enough it fits our vision. The look & feel of Guardians of the Galaxy is probably the closest to what you see in Everspace.


PS4B: Everspace features some impressive weaponry for the players ship to utilize, what were the key factors you considered in designing these?

Similar to our visual art style, whatever is fun, looks and sounds awesome is fine! Of course, there are some basic design rules like energy weapons are best for taking down shields, and ballistic weapons deal more hull damage. But, there is always room for crazy ideas like devices that convert incoming damage into useful energy or a Plasma Thrower dealing a crazy amount of damage over time and looks just bad ass. I mean, who wouldn’t what that? 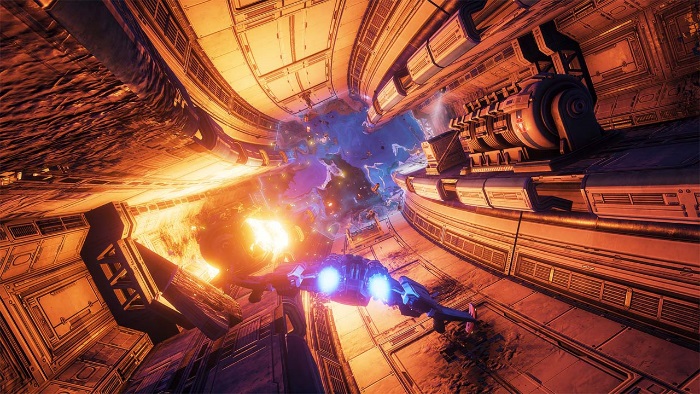 PS4B: The game carved out a nice following on PC, but what key feature of the game do you think translates particularly well to a console audience?

Ironically, I think that our roots in bringing a console experience to mobile phones with fairly short but addictive gameplay sessions back in the day is what makes Everspace such a great fit for consoles, today. Taking any hardware to its limits for a top-notch audiovisual experience and throwing players right into the action of an interesting game world has always been at our heart. Especially, if you are a little older and don’t have the time anymore to spend hundreds of hours into a game, you will appreciate dipping into Everspace for just a few minutes or keep playing for hours. Just one more run…