There is a conspiracy in motion to enslave the galaxy. As Alyssa L’Salle, can you stop the organization you used to work for and save everyone from their dark intentions? Learn more about this PS Vita release in our Cosmic Star Heroine review!

– The best of classic and modern RPGs!
– Brisk pacing that respects your time! Save anywhere!
– No separate battle screen! Battles take place directly in the areas that you explore!
– 2D visual style straight from the height of gaming’s 16-bit era!
– Animated cutscenes reminiscent of the early CD-ROM console era!
– Soundtrack by HyperDuck SoundWorks (Dust: An Elysian Tail, Precipice of Darkness 4)!
– Over 100 minutes of music!
– Multi-character combo techniques!
– Innovative turn-based combat system that focuses on flow & strategy!
– Your own spaceship! Recruit new agents to help your home base grow!

Take on the role of Alyssa L’Salle, a secret agent who is on a routine mission for the agency… until she realizes there’s actually a whole lot more going on. You will definitely need some extra support to tackle this adventure, and you will get that from the characters that you will join your cause. Can you save the universe from being enslaved?

Cosmic Star Heroine is a new-ish JRPG from Zeboyd Games. I say newish as it’s been on PS4 and PC for about a year now, but it HAS recently launched on PlayStation Vita… my preferred gaming system. The great news is that if you did get the game for PS4, then you can enjoy it’s PS Vita version for free since it’s a cross-buy release! Same goes for buying the PS Vita version and getting the PS4 version at no cost. Ceidz and Tracy did a double review last year and really liked the game, so I was definitely looking forward to playing it. Luckily I just so happened to have a 20 hours worth of traveling during the week after I got the game for review, which was perfect! 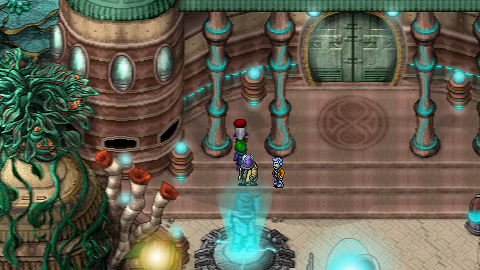 Old-school JRPG classics heavily influence the game and, in fact, I would be remiss if I didn’t mention that I think the biggest inspiration the team had in making the game was Chrono Trigger – which indeed is a great game you can pay homage to! The beautiful sprite work, the enemies on the map that allow you to seamlessly transition into a battle and then back to the game’s exploration segments, the fun story filled with unique characters, it all feels right. You will see some direct nods from the game to Chrono Trigger, such as a fair scene that will remind you of a similar scene in Square’s (now Square Enix) classic.

JRPG need to have a good battle system to keep you engaged, and this game one has a solid one to enjoy. Your characters have several moves at their disposal, which will max out at eight options, and you can switch them in and out of your party to find the combination that works best. Most special moves can only be used one time, except for a weaker one that can be activated more than once. If you want to be able to make the most of skills, then you’ll need to use a turn to recharge to have them topped off again. During regular battles, this will not be an issue, but when you run into the bigger boss battle, you will be using the recharge move quite a few times. Most moves will either have an elemental effect or cause physical damage with some sort of status ailment, you will need to match the right moves up with the right enemies to make the most out of combat. 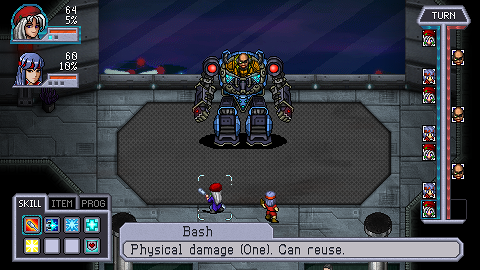 Each turn you will fill a super meter of sorts, and when it fills up you will be able to unleash a much stronger version of your move. This means you need to time things right, as you want to hold an elemental move until it’s your turn to deal considerable damage to an enemy that is weaker against said element. You can also time things right and use Alyssa’s Inspiration move to increase that character’s strength and deal even more damage! As you can see, the game has a very versatile battle system that really allows you to customize it to your play style. I was really impressed on how each battle felt kinetic and very much in the moment, which you don’t usually see in a JRPG.

The game is full of interesting characters including heroine Alyssa, out to save the universe, Chann the Gunmancer, Dave the Hacker, singer Lauren who might be hiding something from her past, gumshoe alien detective Orson, and more characters. You can have up to four characters in your party at one, but Alyssa must always be part of the group. During specific missions, it may lock a particular character to your party as they are necessary for the game’s story progression. Also, all of your characters will earn some XP even if they are not in battle, but if they gain a level or new abilities, you will not be alerted to it, so check the abilities screen regularly as you may see something that might want you to change your team. Some of the characters have special missions on which you can help them. For example, one was with your distant cousin Finn, who is in a bit of trouble since the police station he works for has been overtaken by zombies. If you read that and thought of Resident Evil, then you will get a kick out of the other easter eggs you will find as you play the game. 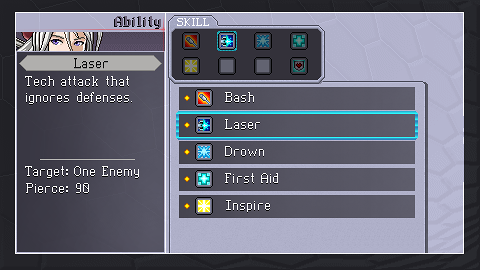 The game looks great and uses beautiful sprite work to make everything pop and come to life. Each of the planets you visit feels very different, with vastly different character types inhabiting each one. I also suggest that you use headphones as you play so that you can enjoy the excellent music created for it by HyperDuck Soundworks.

The game itself will take about 14-20 hours or so to finish depending on your previous experience with JRPG and how many sidequests you decide to complete. I can’t be more precise since there’s no clock in-game to keep track of how much time you’ve spent playing this one. Nowadays, as a happily married fella with two kids, I definitely don’t have time to dive into 60-100+ hours long RPGs, so I really appreciate having a game like Cosmic Star Heroine, a game that is big enough to feel like an epic adventure while not feeling like it drags at any point just to increase your overall gaming time. 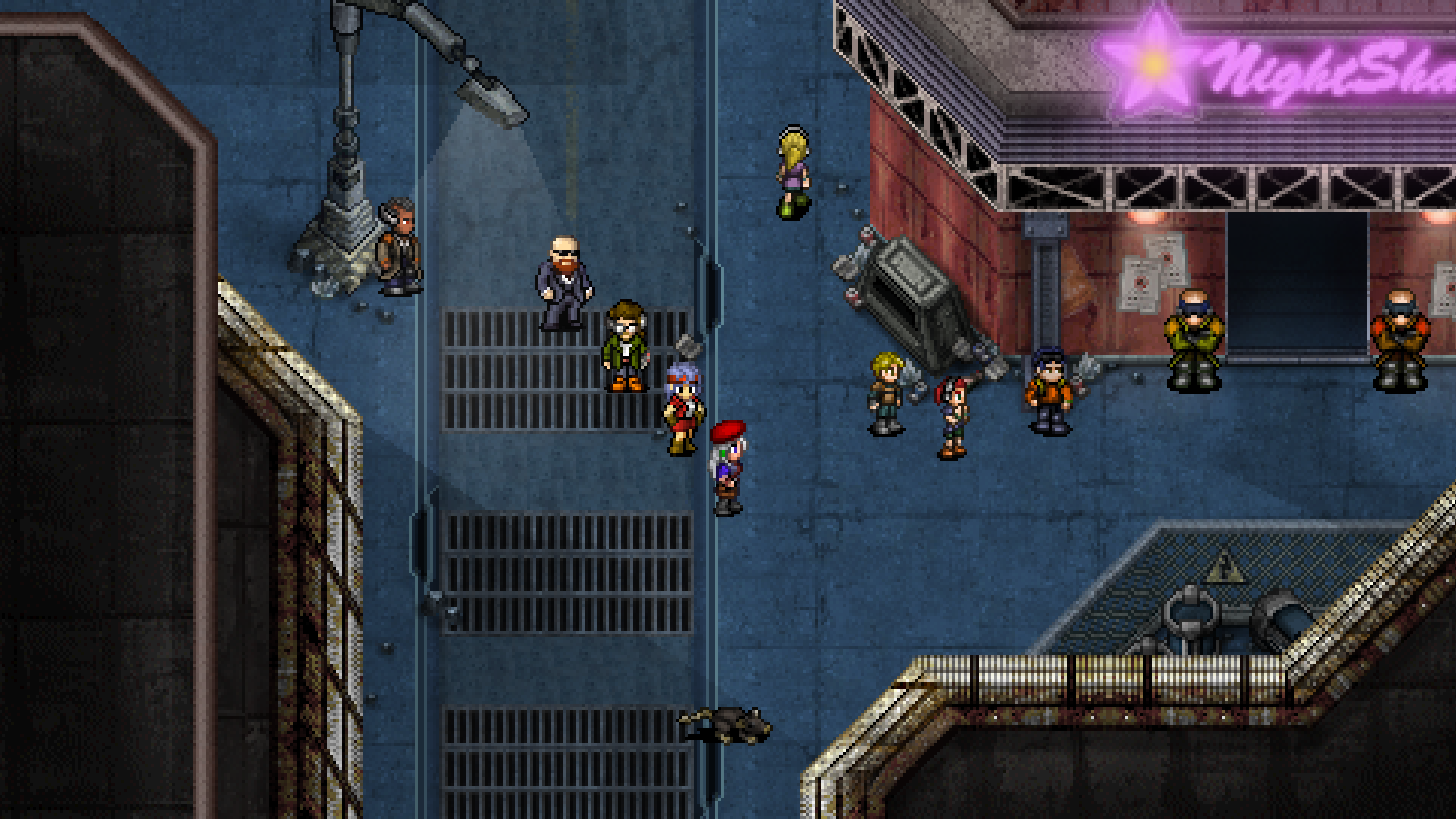 I really loved playing Cosmic Star Heroine on PlayStation Vita and everything it brings to the table. It made me go back down memory lane, remembering games I enjoyed way back in the day while taking on this new adventure. The game has a great battle system that manages to make every battle feel fresh. If you’re looking for a JRPG to play at home or on the go, then I highly recommend that you buy Cosmic Star Heroine today!

Disclaimer
This Cosmic Star Heroine review is based on a PS Vita copy provided by Zeboyd Games.