A unique game with a film noir atmosphere, seductive wanton women, and dirty dangerous secrets.
Gameplay is based on a motion comic with a non-linear plot mixed with MATCH3 puzzle fights.


This is a double review for Metropolis: Lux Obscura. The game was played by Tracey and Ceidz. This review presents what they both had to say.

As you can imagine, with this one being a match-three puzzle game I did not have high expectations for the story. “A guy gets out of jail and does some shady jobs” is a good way to sum things up, but I do have to say that the “noir” theme is very well done. The visuals and overall graphical theme of this game set it for a mature audience since it’s packed with mature themes, which might rub some people the wrong way.

Overall gameplay is that of match-three puzzle game, but an interesting twist since you can move a tile wherever you want in its row or column. This adds an interesting dynamic to an old genre. The resulting match you make by moving tile can end up damaging your opponent, or perhaps healing yourself, and the ultimate goal is to make your opponent lose the match by depleting its health. 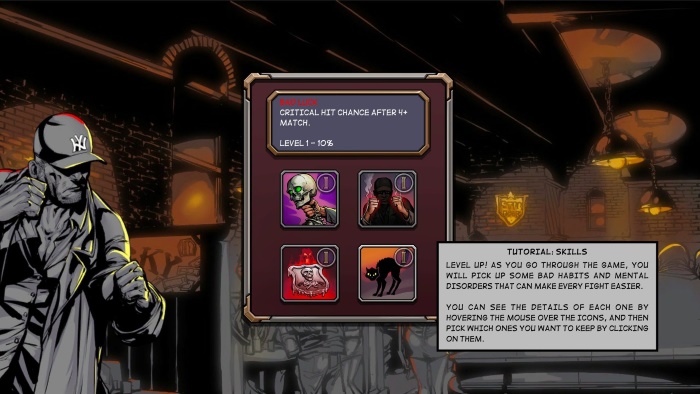 There are also power-ups that can be unlocked after each victory which can give you more hit points, raise your chances of landing a critical hit, and more. There are several possibilities, and power-ups can definitely change the tide of battle if you’re urgently in need of an extra boost during a hard time.

Even though the story was okay at best, I liked the fact that depending on the mission choices (or dialog choices) you make during the campaign, there are four possible endings, which adds some replay value to the overall experiences.

Like most game releases from Sometimes You, this one comes with a shiny Platinum trophy, and it’s a relatively easy one to obtain. Most trophies are linked to the story, which means you will need to do four full playthroughs, while the remaining trophies are easy to obtain if you pay attention to the requirements. I won’t go into what needs to be done for each trophy, but you can probably find a guide or two out there. For reference, it took me around four hours to get my Platinum.

You play as Jon Lockhart who was recently released from prison where he was in for a crime he did not commit – a crime he was framed for. But by whom? He’s keen to find the person who ruined his life, and he’s also keen to pick up where he left things off with Goldie, his girlfriend who happens to work at a club. To Jon’s surprise, she isn’t at her usual spot, and since he’s in need of money, he decides to work for local crime lord Falcone. As you can imagine, the story is full of intrigue, violence and mature content, all told in a comic book style presentation.

At its core, Metropolis Lux Obscura is a match-three puzzler, and it’s a fun one at that! The game offers a decent challenge, but it doesn’t give you any help or hints except for a short two-minute tutorial which explains the basics of the game. One thing I thought was harsh is that when you die, it’s game over and you have to restart from the last auto-save, learning from your mistakes to try and succeed. 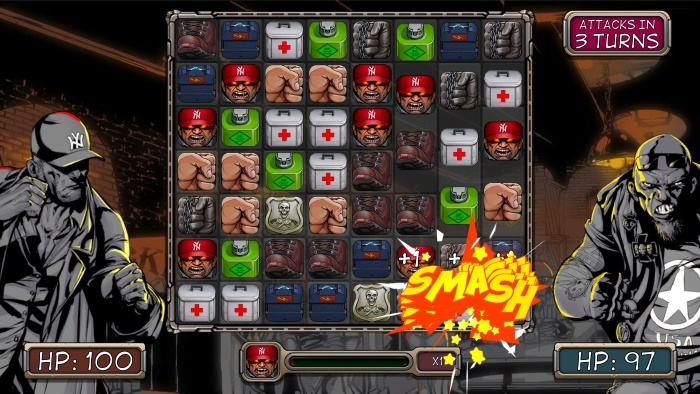 When in battle, you are presented with a three-game set, and you will realize that different tiles unlock different attacks or effects. For example, if you match three angry face tiles together, your anger meter increases, raising your attack damage. There are also chain tiles that cause even more damage. Later in the game, you will get what look like stone tiles, and there are great since they are highly explosive and will cause a great deal of damage to your opponent.

Your opponents will let you attack for a few turns (between one to four times) before they take their turn. The higher HP, an enemy, has, the more turns you have to finish them off as they can deal high damage and destroy you if you’re not careful. There are also level up skills that can be learned to make your game easier, but you will get a number of game overs before you get your first ending. It’s a challenging game due to how the HP of your enemies is always double or more than yours.

The game has full voice acting, which was a nice surprise. I do need to mention an issue I encountered during my run with the game. Two trophies did not unlock for me, even though I met the required criteria, so hopefully the game is patched so that I can get my Platinum trophy for this one. 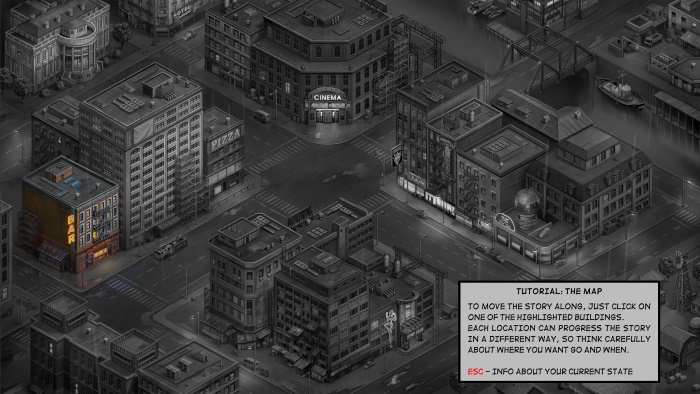 Final Thoughts
If you want a match-three puzzle game on PlayStation, then the gameplay of Metropolis: Lux Obscura might scratch that itch. Its noir theme is interesting, but the mature content for this one might not be for everyone. For the asking price, being able to add a new Platinum trophy in around four hours is definitely nice, right?

Disclaimer
This Metropolis: Lux Obscura weview is based on PS4 copies provided by Sometimes You.

Tacoma Will Release On PS4 On May 8