It’s your birthday, so your dad asks you to follow him so that he can show you something he’s made for this special day. You will then basically start a short tutorial stage in which you will learn the basics for the game. You’ll move with the left analog stick or the D-Pad and jump with the B button. You’ll also get to wall jump by hugging a wall and then pressing the B button, and can do this again on a wall you land on in front of you, and so on. You also have a sword you can swing with the Y button, and can access your inventory with the X button to equip the item you will use with the A button – at first this includes some healing potions and a powerful bomb, but you’ll get more stuff as you progress. Oh, and if you find a treasure chest you can open it with the R button. 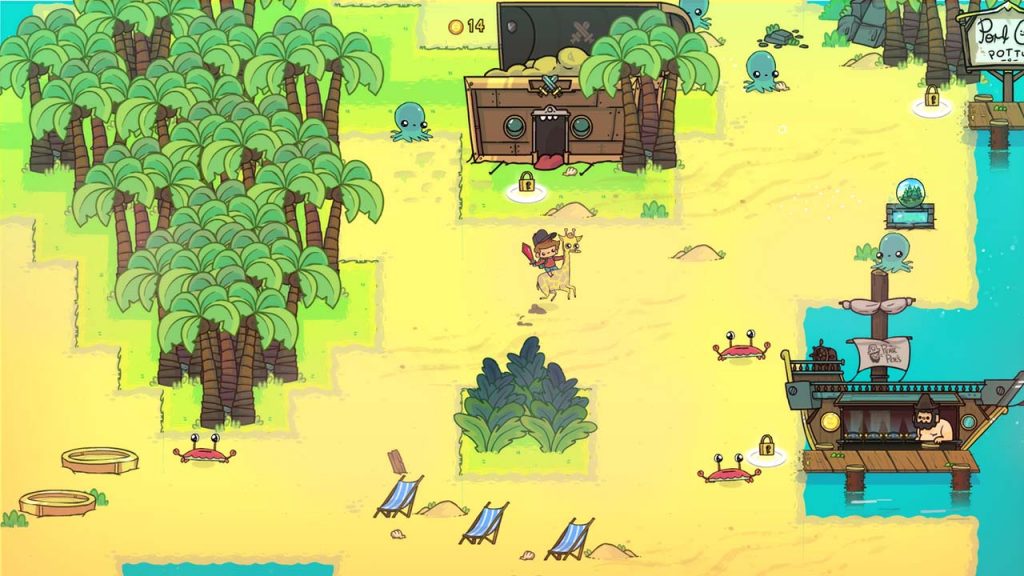 When you make it to the top of the area, your dad will instruct you to blow up the cake, and it is then that you will find your new pal: a giraffe you end up calling Sparkles. All was going great until Mr. B, who your dad says is an old pals of his, flies in an states that he has devised an evil plan by which he will start to turn old people into hot dogs (because reasons), and your dad is the first one! After picking ip your dad’s hat, and being knocked out by a volley of bombs from the evil Mr. B, you wake up back home next to your mom. Turns out Mr. B is holding your dad hostage and demands rubies in exchange for his freedom, so of you go on an adventure to get all the rubies… and revenge. 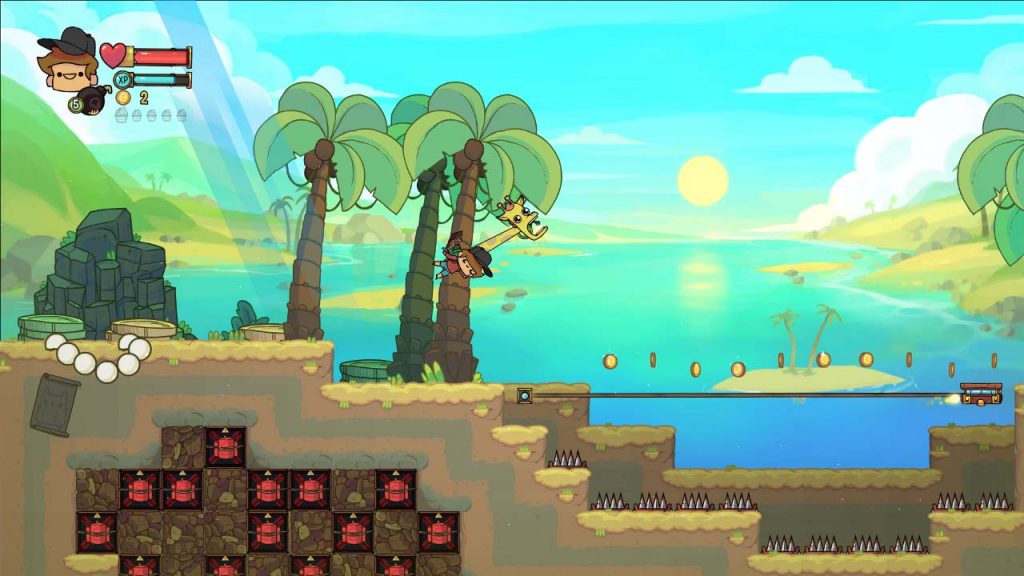 Once you have Sparkles you’ll be able to press and hold the B button after jumping to use it as a spinning giraffe thing that will greatly slow down your fall. Why? Because the giraffe will spin it’s tongue like a propeller! Sparkles will also help you during your adventure to, for example, turn into a wrench thing to activate a nutbolt switch, or latch onto a floating gadget to then send you both flying forward over long gaps or bottomless pits. A bit later you will have a tiny rock join your adventure, and it will help you to hit the bullseye targets spread over each stage to remove the boxes blocking your way/perhaps make new ones appear. 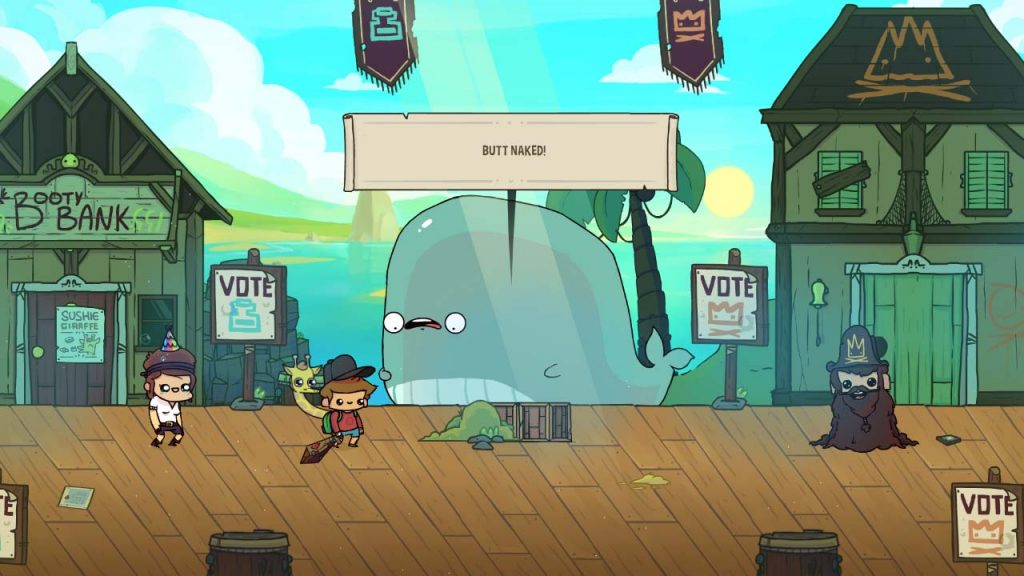 As you explore each area in the game you might spot a large and colorful cupcake which you can collect for the Cupcake King. Cupcakes can be traded with him for some cool stuff to aid you on your adventure, so be sure to search high and low for all the cupcakes! There are five cupcakes on each stage, so don’t exit a section until you’ve found its cupcake or you will need to replay the stage for another chance. At least the game lets you select which area to start in when you replay a stage, and it will also ask after completing a section if you want to go to the next one or go back to the world map. Oh, and there are also sticker packs hidden in each stage, and these will go into the Sticker Book. The flying, talking purple sticker book that will fly your way once you find your first sticker pack. There are 44 stickers in total, and you gotta collect ‘em all!


Defeating enemies will make them leave behind colorfully blue glowing spheres you should certainly collect since they’re actually XP! At the upper right corner of the screen, and right below your health bar, there is an XP bar that will fill up as you collect XP spheres. Once it is full you’ll level up and you’ll get to select a new ability to add. These could be, for example, a Lucky Charm so that more loot is found from chests, a Giraffe Grapple so that once you have a five hit combo going Sparkles grapples you towards enemies when you press the attack button, or a Spirit Bag so that when you die you drop a spirit bag that will contain all of your coins – reach the bag and you’ll recover them! 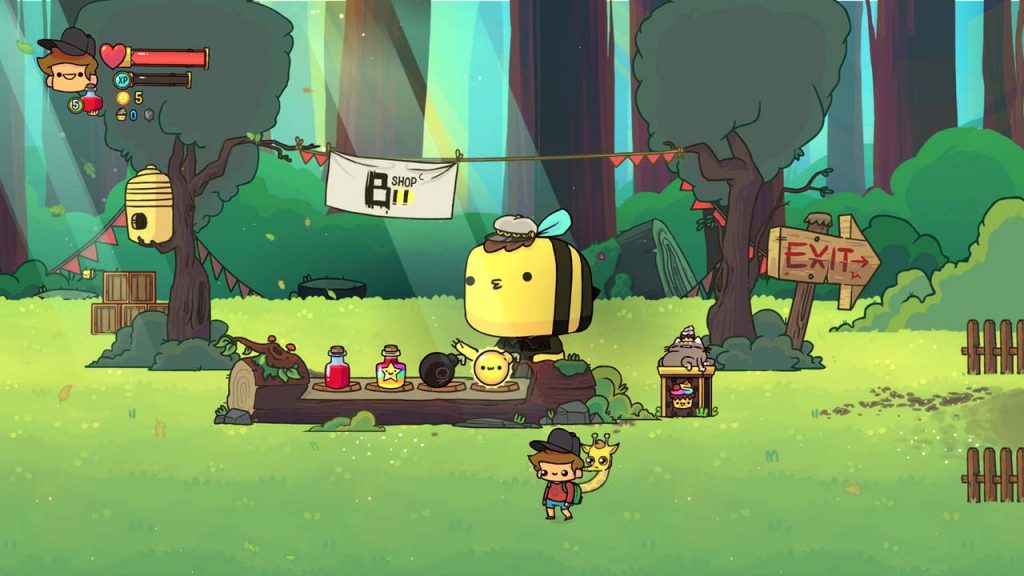 The coins you collect can be used in a stage to open golden treasure chests which will reward you with items to restock your inventory, but you can also use them at B-Mart to buy items from the large bee fellow who is in charge of the store. Single coins are worth one unit, but coins bags are worth five. Destroying boxes, mailboxes and other stuff in each area might also reward you with some coins, and since the price of item treasure chests (you know, the golden chests) goes up as you progress in the game, you’ll definitely need to collect as many as you can!


You’ll be graded for each stage based on how fast you were able to complete the whole stage, how many enemies you defeated and how many times you died. If you want to 100% the game then you will need to get an A+ grade for every stage in the game, and that pretty much means doing no death runs in each stage as fast as possible while defeating every single enemy that is foolish enough as to get in your way. 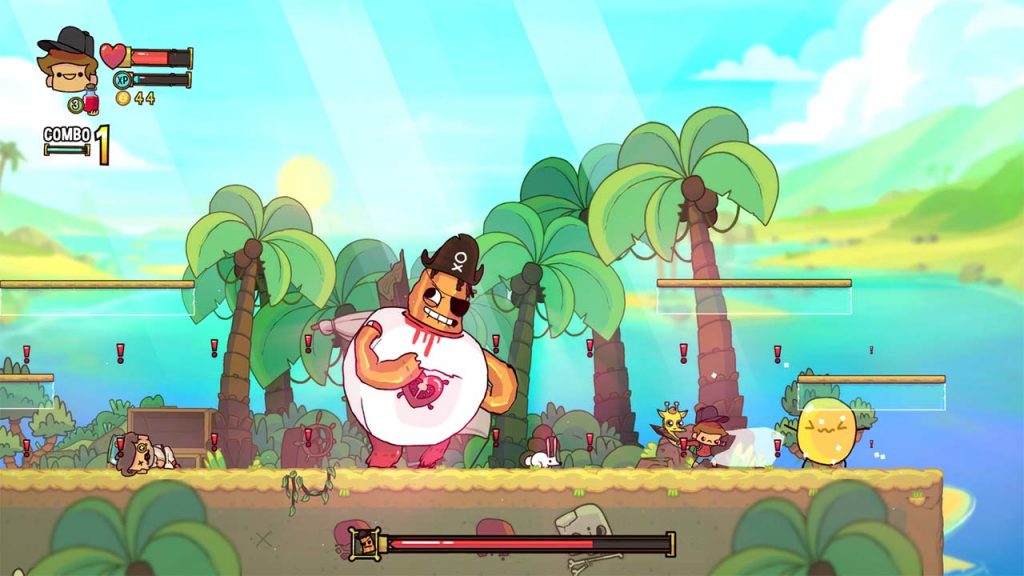 The Adventure Pals is an addictively fun action platformer that you have to play on Nintendo Switch. There’s a ton of content to enjoy, so you’re looking at 8-10 hours with the game depending on how good you are at action platformers and if you find all stickers and cupcakes for each stage during your first run. The game runs perfectly when playing it docker or on the go, with colorful characters and backgrounds that help to make everything pop.

Disclaimer
This The Adventure Pals review is based on a Nintendo Switch copy provided by Armor Games.