Turn-based 2D steampunk strategy release SteamWorld Heist from Image and Form has now found its way to the Nintendo Switch with all DLC available right from the start at no extra cost. Learn more about this gem in our SteamWorld Heist: Ultimate Edition review!


I’ve been a fan of the SteamWorld series since I played SteamWorld Tower Defense on DSiware way back in 2010. As the name suggests, this one was set in the SteamWorld universe and featured gameplay some of the mechanics we have now come to expect of other tower defense releases. Instead of developing a sequel, which would have been the logical thing to do, Image and Form decided to instead work on a procedurally generated Metroidvania style release in which you dig downwards, mining for precious stones and metals to sell them. You’d then use the money to purchase upgrades that would allow you to continue digging further and further down the mine you inherit from your late uncle, powering up your pickaxe to break stronger blocks as you find new upgrades for main character Rusty.

The game was SteamWorld Dig, released first on the Nintendo 3DS, and later ported to the PlayStation 4, the PlayStation Vita and the Nintendo Wii U. I own all version and have played the game in all of the aforementioned consoles more than once, so I was definitely looking forward to playing a sequel to see how the team would improve on the formula. But Image and Form, being Image and Form, decided that they wouldn’t do a direct sequel to SteamWorld Dig (at least not right away!), and instead figured they should work on a 2D turn-based strategy game set in the SteamWorld universe, in a future where resources are scarce, robots are out in space, and when they run into one another, they shoot all over the place, using well-placed ricochet shots to defeat their enemies. 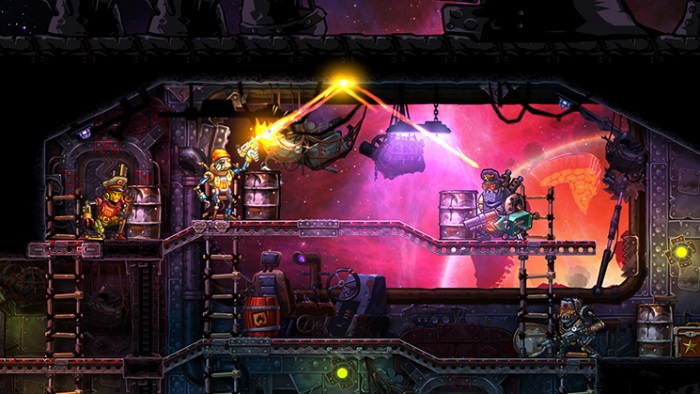 I own the game on Nintendo 3DS and the Nintendo Wii U, and you’d think that after finishing the game and its DLC content on both platformers, something that takes around 15-20 hours or so per platform depending on the difficulty in which you play, I’d be done with SteamWorld Heist… but then the company decided to release the game on Nintendo Switch with all DLC included right from the start. You can tell a game is very fun to play when you’re up for playing it all over again from start to finish on a new platform to do a review, right? That’s how good this procedurally generated 2D turn-based strategy game is!


SteamWorld Heist places you in the shoes of Captain Piper Faraday who, at first, only has two other members in her space crew: a pilot and a companion. Said companion can join you as you board one of the many ships you will explore in search of loot and rare loot as you try to sneak up on the enemies on board, making the most of the cover provided by empty oil drums and other metal objects, avoiding hazards such as the exploding barrels (which are clearly marked with a label that makes their all-red exterior pop even more against the backgrounds), or the deadly turrets that might be activated in some of the stages you need to complete.

The objectives are simple: enter a ship, destroy anything that moves, grab all loot bags and the rare loot box, and, when available, complete additional objectives such as recovering stolen cargo, freeing an NPC, or defeating the boss. Stages come in small, medium and large and are of varying difficulty, on top of the actual five difficulty settings you can select when you start the game (and which you can change before entering a stage if you want to). The difficulty settings bump up the number of enemies and turrets you might face in a stage, as well as the damage they deal, greatly increasing the challenge. This is worth it if you want to, in exchange, get a percentage increase in the XP you get after beating a stage, but you can also lower the difficulty to make stages feel like a piece of cake so that you can carry on with the story. 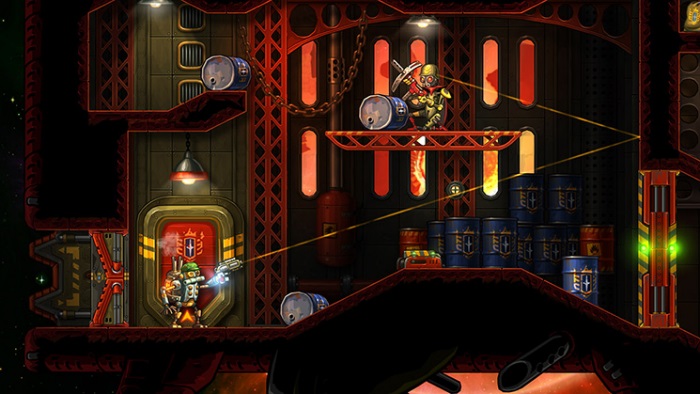 Gameplay, as mentioned before, is turn-based, which means your crew members will take their actions, be them moving, attacking or using a skill, and once all are done, and your turn is over, all of your enemies will perform their actions in their turn. Because of this you must always think ahead and value the consequences of your actions. You might, for example, decide to attack an enemy to try and destroy it so that it can’t attack during your opponents’ turn, but if you’re not careful you might not have a chance to run to cover – if you’ve used all of your movement points to get to the spot from which you can make the shot – and this might leave you vulnerable against a counterattack offensive that could destroy one of your crew members.

Each of the stages awards you with stars for completing different objectives, one of which is to finish a stage with all of your crew members in one piece, which is why if you want to 100% the game and not have to replay stages, it is important that you take care of Piper and the other crew members during each battle. Grabbing the rare loot box in the stage will also award you another star, so be sure to search high and low for it! I’d suggest you don’t move to a new area of a stage until you’ve explored the section you’re currently in, and that you sometimes split your crew members down different paths so that you can cut down on the time it takes you to complete all objectives. This is very important for stages that have a countdown timer, so be ready! 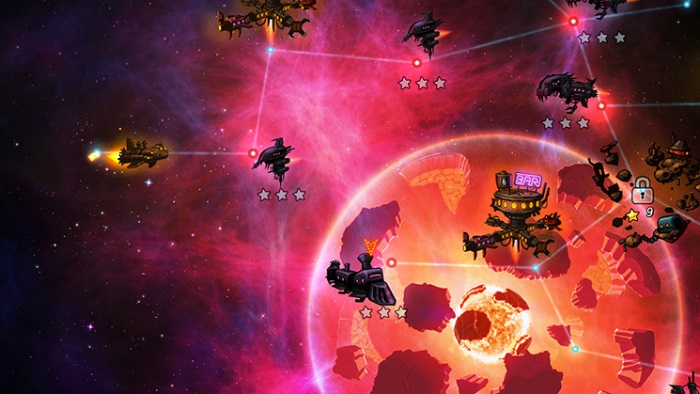 Stars will be added to your overall count once you complete a stage, and if you didn’t manage to get all stars in one go, you could try again right away if you want to. Stars are a must if you want to see everything the game has to offer since there are areas in each map that are blocked by a space gate that requires you to have X number of stars on you before they can open the way, and this means you might not have access to., say, a fully loaded contraband spaceship with some rare – and very expensive – items and weapons that can definitely make a difference in your journey.


As you read at the start of this review, the game available on Nintendo Switch is called SteamWorld Heist: Ultimate Edition, which makes you wonder why that is the case. It turns out that by buying this version, you will not only get the full game, just like the version you can buy in other consoles, but also all of the DLC released for it, for free! This means you will get access to the weapons, hats, missions, etc. from The Outsider DLC, which also includes a new ally to join your forces, as well as all the extra extra hats from the corresponding DLC. That’s right, you can customize each of your crew members with hats, so if you want to add more to your collection, be sure to shoot them hats from the heads of those bad, bad robots you’re fighting against. 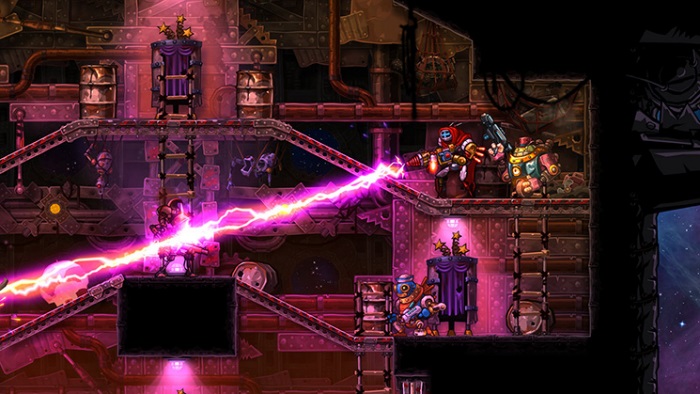 I have to make a special mention of the game’s soundtrack which is just excellent for the space opera story and action. The soundtrack is performed by real-life robot troupe Steam Powered Giraffe and, given the steampunk nature of the game, this combination works on so many levels. The band’s work on the soundtrack is so perfectly integrated into the game that the band members are also portrayed inside of the game, as themselves, playing for their fellow robots in this faraway future. You can (and should) buy the soundtrack by clicking right here – it’s only $10 for 13 tracks of awesomeness. 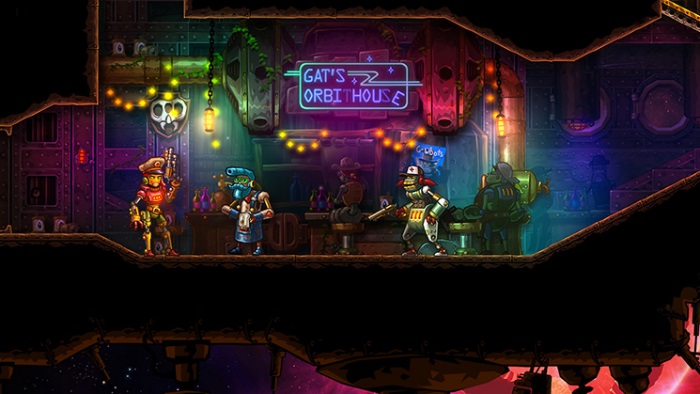 SteamWorld Heist is a must-have game on the Nintendo Switch, and since it’s available as SteamWorld Heist: Ultimate Edition, you get the main game and all DLC in a single download for a very affordable price. If you’re a fan of SteamWorld Dig, or of its sequel (the aptly named SteamWorld Dig 2), and want to dive into an adventure that is different but just as fun, and set in the same SteamWorld universe, then you should download this game today. I highly recommend it since you’ll be spending dozens of hours completing the whole game and its DLC missions. And once you’ve finished the game, you can dive right back in thanks to its New Game+… 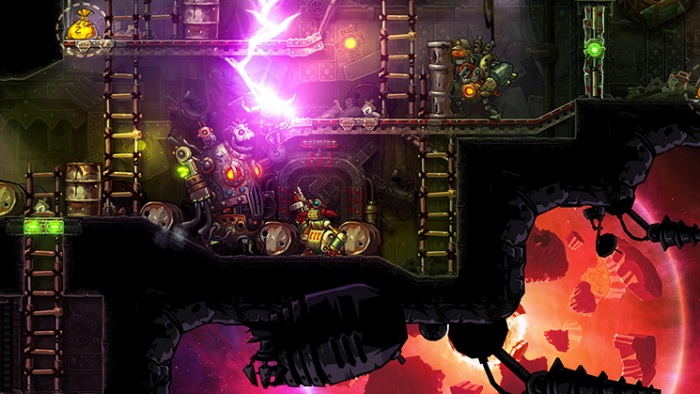 Disclaimer
This SteamWorld Heist review is based on a Nintendo Switch copy provided by Image and Form.

The Journey Down Making Its Way To PlayStation 4