Fallen Legion: Rise to Glory is the definitive version of the Fallen Legion saga, offering Fallen Legion: Sins of an Empire and Fallen Legion: Flames of Rebellion in a single package. You’re getting two games for the price of one, as well as some extra stuff available only in this Nintendo Switch release, but more on that later! Both games tell stories that compliment each other, and playing both will allow you to see the bigger picture in order to understand what is really going on. 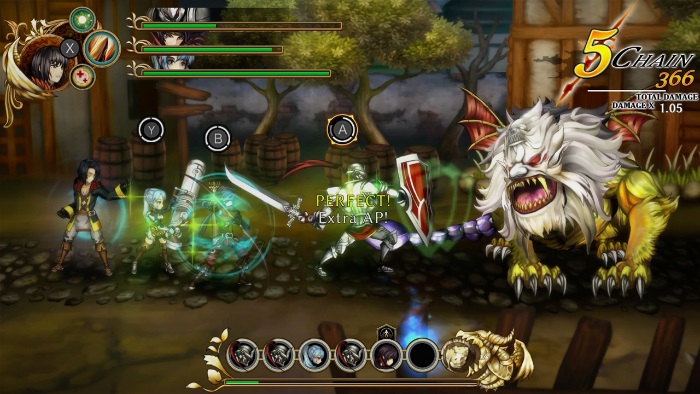 Both games feature the same basic gameplay mechanics. In battle, you will press the Y, B or A buttons to make your Exemplars (the characters in your party) attack. Each attack will use 1 Action Point (AP), and each Exemplar can have up to 3 AP at once. Each attack will lower a bar around the button for each character, and once it is gone you will need to wait for it to fill up to be able to attack again. Your main character can cast magic with the X button, and you can select which spell to use by first moving the left analog stick to the one you want to activate. Spells have a cooldown period, so you won’t be able to use them again until the blue gauge for each magic skill is full – you recover some mana to fill the gauges every time one of your Exemplar attacks. 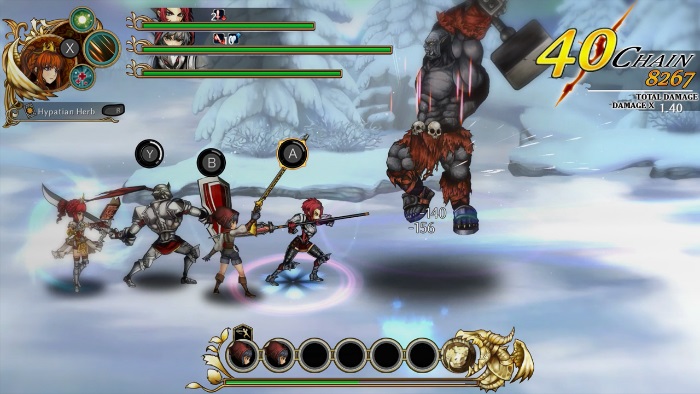 You can also block by pressing the L button so that you can defend against enemy attacks to lower the damage your Exemplars receive. And to keep you from just blocking over long periods of time, your Exemplar won’t recover any AP while blocking. If you manage to press the L button just before an enemy strikes, then you will trigger a perfect block which will make your Exemplars recover 1 AP while reflecting projectile attacks or making enemies stagger a bit.


Regular enemies are easy to defeat, but you will also run into enemies that attack from a long range, hard hitting melee enemies that can take a chunk of your hit points in one go, and even bosses that will test your might. When fighting bosses you should pay attention to the white pulse inside of its life bar. Bringing it down to zero will leave a boss vulnerable, and that means that all of your Exemplars will have unlimited AP to attack with everything you got. To be able to do this, you will need to pay attention to how a boss acts during battle so that you can exploit their vulnerabilities to your advantage.

As the Exemplar attack a combo bar at the bottom will fill up, one node at a time. When an Exemplar attacks on a node that has a buff attached to it, such as, for example, a Haste buff, will receive it. There’s a node with a blue aura called a deathblow node and when an Exemplar attacks there it will deal considerable damage. You need to be careful because if you are hit or if your combo breaks, then the combo bar will be reset. 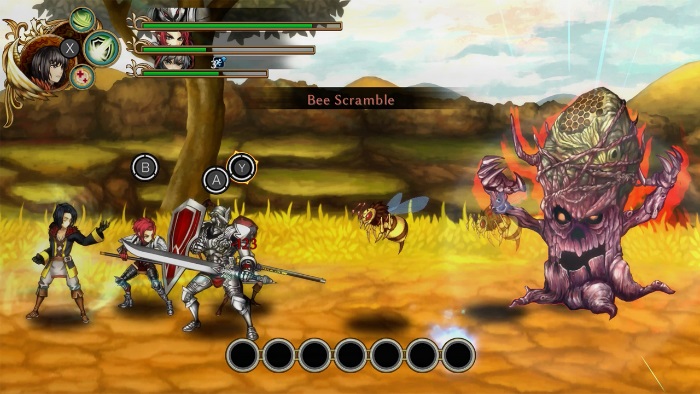 You can also take advantage of link attacks which can be activated when an Exemplar has full AP. Press the ZR button at the same time as the button for an Exemplar, and you will use all of its AP for the link attack. Another way of activating it is switching characters with the ZL button right after a perfect block with the L button. Speaking of that, the ZL button also changes the position of the Exemplar. Those in the middle and rear spots are more protected than those in the front, but you do need to be aware of how some enemies can attack the rear row or even hit all Exemplar in a single go.

An interesting element is how choices affect the game. Between battles, you will get a chance to make a choice that will directly change the fate of Fenumia. You will get a power-up, but the decision you make could, for example, make an NPC become an ally or a foe, but it could also end up opening a new path in the world map that would otherwise remain hidden from you. You’ll have three options for every question you get and a time limit to make your choice, so be ready! 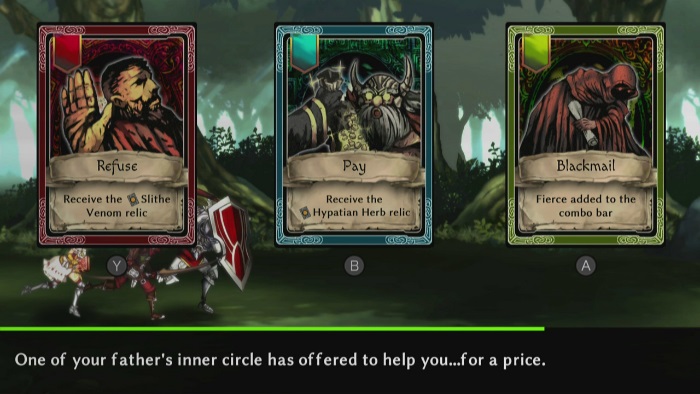 Completing a level will allow you to see how good you did, grading you in defense, offense and technique while also letting you know what your max attack chain was. You might also find a gemstone to aid you on your adventure. These can be used to enhance an Exemplar with bonuses or new abilities, and you can equip up to three of them at the same time.

Something you should definitely aim to unlock is tributes. These are very helpful since they grant stat bonuses to Exemplar, so the more you have, the better your odds of victory! You can get tributes as you complete battle stages, or perhaps you can find some of the NPC that will reward you with one. 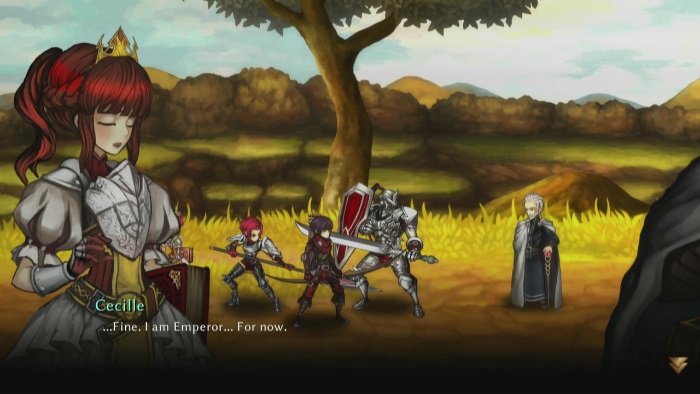 There are also relics for you to find. Relics are very powerful magical items that can be used by pressing the R button. Relics break at the end of a level or when you use them, but they’re so powerful they can definitely turn the tide of battle! For example, one relic is the Vergone Helmet which will make all of your Exemplars invulnerable to all damage for 15 seconds, rendering then invincible as you unleash their attacks upon your enemies.

With that out of the way, it is time to talk about the extra stuff this Nintendo Switch version of the two games is getting. The collection also includes five additional hidden characters you can unlock by meting specific requirements (which I won’t spoil here), additional story branches, levels, and boss fights, Japanese voiceovers, with Shizuka Ishikami as Cecille, Hidenori Takahashi as Laendur, Ai Kakuma as Antoinette, and Kengo Kawanishi as the Grimoire, battles are remixed when you take on a new adventure in New Game+ or One Life Mode, and characters unlocked in Flames of Rebellion can be used in Sins of an Empire (and the other way around) when you play in New Game+ and One Life Mode. 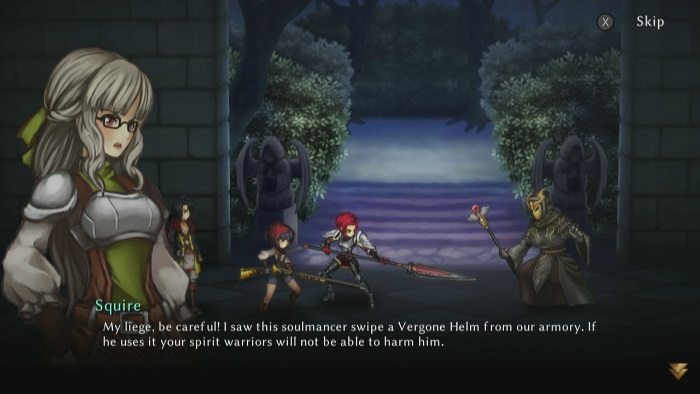 Thanks to the extra content for both games, Fallen Legion: Rise to Glory is the best way to play the definitive version of Fallen Legion: Sins of an Empire and Fallen Legion: Flames of Rebellion. Being able to play the game at home or on the go is fun, and the game looks great on TV and on the Nintendo Switch’s screen. There’s a lot of content to enjoy in this collection, making it’s $39.99 price a steal. 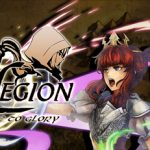 Disclaimer
This Fallen Legion: Rise to Glory review is based on a Nintendo Switch copy provided by NIS America.