Pinball FX takes on the Jurassic era with a romp through the movies of Jurassic Park and Jurassic World. Learn more about this new set of tables in our Pinball FX3 – Jurassic World Pinball review!

With one pinball table based on Jurassic World™ and two more inspired by Jurassic Park™, you know what that means – LIFE FOUND A WAY!

Jurassic Park – This table takes place during the original Jurassic Park film and will call back to it with clips and audio for crucial moments in the movie. This pinball table is very hectic, and I definitely found myself losing several balls when playing due to everything that is going on… but that does not mean it’s a bad table since it’s an action-packed table with lots to do.

Jurassic Park Pinball Mayhem – When I first started playing this table I was surprised that it had the name Mayhem in the title, as it seemed rather slow paced when I began to play. But as you progress through the table you start to see where the Mayhem name comes from as a lot of things start to happen. You can change between night and day by hitting a certain spot, thus making dinosaurs more active. The weather can also change which is very cool since it affects the way the ball behaves as it moves around the table – a neat little trick I haven’t seen in other Zen Pinball/Pinball FX tables. Overall, it’s a really cool table that surprises you with new stuff the longer you play.

Jurassic World – This table features the action from the most recent film of the franchise – that is before the release of Jurassic World: Fallen Kingdom. Like the Jurassic Park one, it will use video and audio to add to the overall feel to immerse you in this experience. Unlike the other two tables, the colors for this one are a bit more muted and cold when compared to the warmth of the other pair. The gameplay for this one felt more smooth and thought out, and the action is more bombastic and extraordinary as well.

This is another strong and solid lineup of pinball tables for Pinball FX3, and a must-have set of tables, even more so if you’re a fan of the Jurassic Park series. I’m glad to see Zen Studios trying new things for their pinball tables as they take on these large franchises. I can’t wait to see if there will be a new table for Jurassic World: Fallen Kingdom later this year. 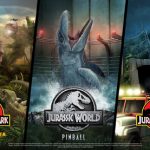 Disclaimer
This Pinball FX3 – Jurassic World™ Pinball review is based on a PS4 copy provided by Zen Studios.

Chasm Out On PS4 And Vita This Summer