[PlayStation 4] The Swords of Ditto Review

You have been chosen to be the next wielder of The Sword of Ditto, so go and find the sword to save the world! Learn more about this excellent adventure in our The Swords of Ditto review!


The Swords of Ditto – Gameplay Trailer

The Swords of Ditto is a compact action RPG that creates a unique adventure for each new hero of legend in the relentless fight against the evil Mormo. Explore a delightful but dangerous overworld, brave menacing dungeons, and improve your hero in a charming village, during your quest to overcome the evil that plagues the island. Unleash the mystical Sword of Ditto and grab a co-op friend for an unforgettable adventure!

Unique Adventures Linked Together: Each adventure becomes its own legend, both distinct from those that came before it and part of a heroic legacy that bind together.

The Swords of Ditto is a new roguelite adventure from onebitbeyond and Devolver Digital. The game takes it’s inspiration from the beloved The Legend of Zelda series and wears it on its sleeve with pride. As I was playing the game I saw pieces of the original The Legend of Zelda Zelda, of A Link to the Past, and even of Link’s Awakening (the best The Legend of Zelda game ever). 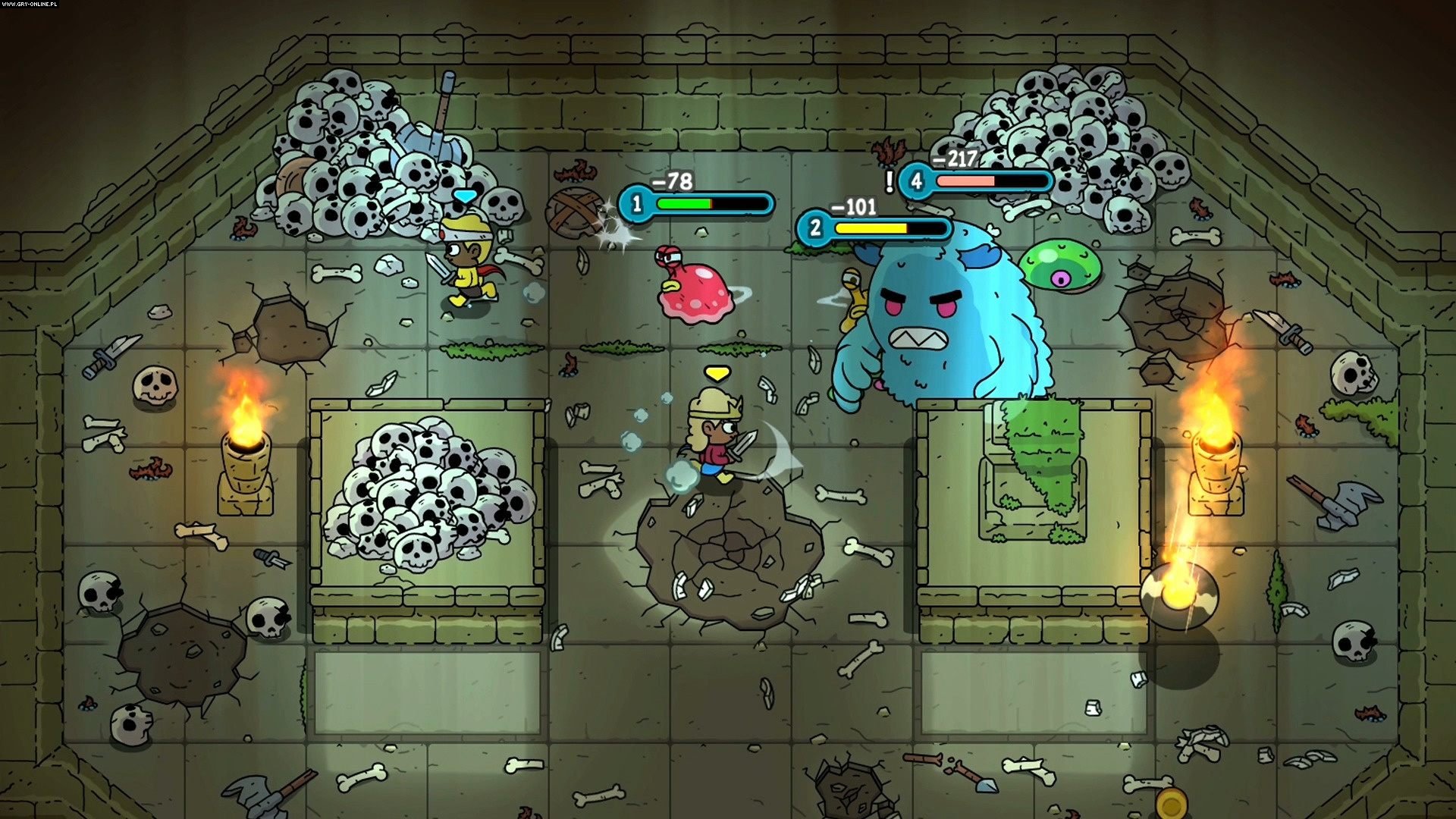 The game starts you off quickly, ready for action. After washing up on the beach, a mystical flying beetle named Puku wakes you up and tells you are that you are the chosen one who will save the island, so you set off with him to retrieve the Sword of Ditto so that you can stop the evil Mormo from rising! You wander into the evil castle to find the mythical sword, and find the sword you do… except you find that Mormo is already going strong, and you end up being killed. At that point, it’s game over, and you’re done.

Why are you still here? Okay. Fine! There’s more to it. The Sword of Ditto selects a new chosen one every hundred years, so the story continues with Puku waking up the next chosen one from bed, and off you go to retrieve the sword and bring an end to evil. You get four in-game days to stop Mormo, and during that time you want to level up, explore find the hidden toys (weapons) and purchase stickers (which act like buffs) for your character to get ready to battle Mormo… I mean you could just go to try and fight Mormo, but you will likely die just as quickly as you did during the intro!

The Swords of Ditto is simple to understand since you use the analog stick to control your direction and swing your sword as needed. You can also get toys (your weapons) which you can use to help on your adventure. Toys can be earned by beating the two anchor dungeons, which also help weaken Mormo, or by buying them in town. Stickers can be bought in town to help you buff your character, and depending on the playthrough you can use them to have each character feel different.

Now, when you die (FYI: you will die – a lot), you will awake as a new chosen one 100 years later, and this is going to cause major changes in the world. It’s procedurally generated, making each adventure feel very different, and because of the time limit for each run, you’re constantly on high and alert and on the move. What makes the whole experience work is that you’re always learning from your mistakes, and dying is not the end of the world since you get to carry in a different era. 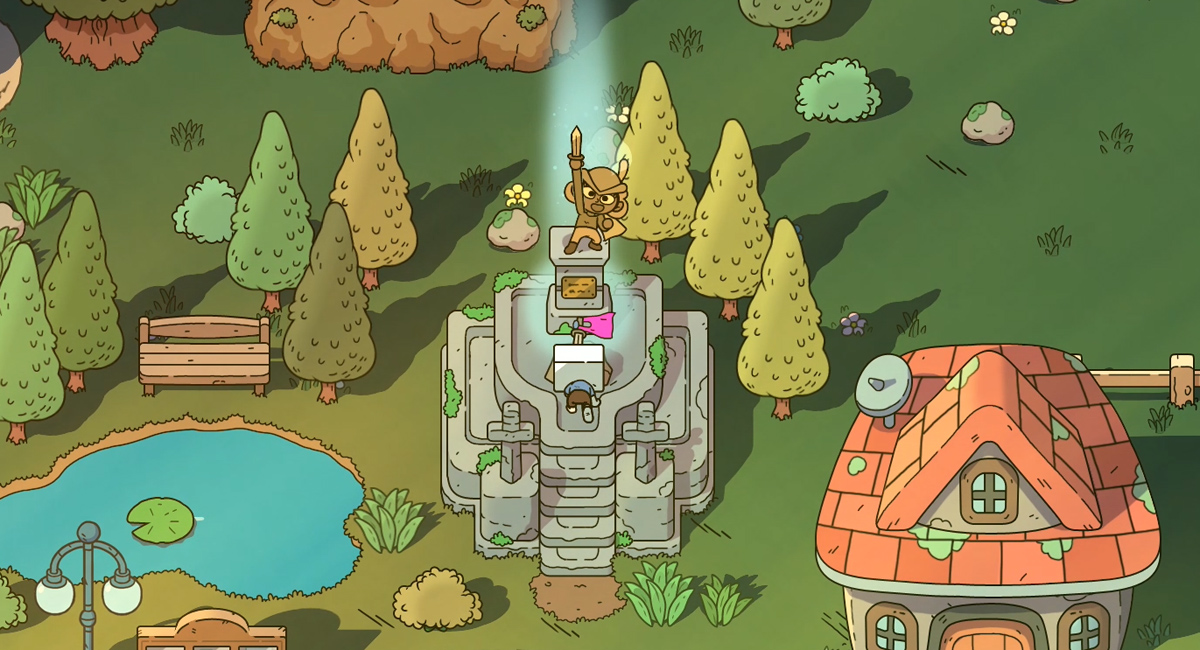 What I really appreciated about the game was how close it felt to playing the older The Legend of Zelda games. The combat is presented in an overhead 2D view, and you smash pots and cut grass hoping to find things to help you out on your adventure. But the biggest thing to stand out for me was the dungeon designs, which feel so Zelda it’s great. You need to find small keys to open the doors so that you can move further into the dungeon, eventually finding the boss key so that you can take on the dungeon’s boss. The layout of each dungeons and the solid enemy design add a ton of challenge to the game, and I’m sure you’ll love every bit of it.

For each enemy, you face you will need to have a different approach. You’ll run into enemies that you’ll need to stun before you can damage them, robots that can only be dealt with by dodging their attacks to hit them from behind, slimes that must
be lit on fire before you can damage them, and many more. It really makes for a very dynamic experience that will challenge you as you find new enemies on your quest.

The game is gorgeous, with an art style and some great animation that made me feel as if I was playing a cartoon. It’s freaking adorable and just exudes fun! Character design is very interesting and helps to bring every NPC, critter, and enemy to life, making the whole experience just click. Same goes for the music which adds some solid tunes to your adventure,

That goes into character design as well as you should meet some really interesting characters in the game. Everything just clicks in the game, and it’s firing on all cylinders. The music is great as well, keeping you going while adding a whimsical feel to the game. 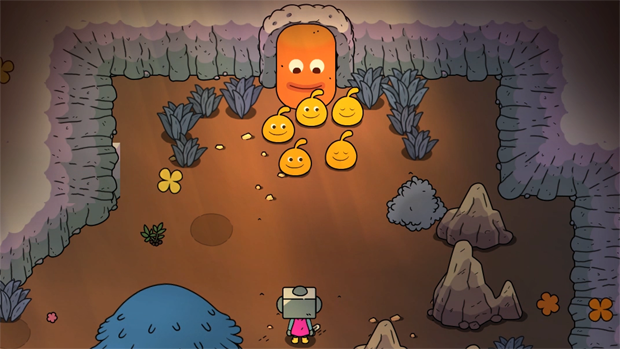 The Swords of Ditto is a great game with a beautiful art style and great music, fun and rewarding combat, and solid enemy design. The dungeons are fun to navigate and explore, paying homage to The Legend of Zelda series while also doing its own thing. I think the only thing that might rub some people the wrong way are the roguelite elements, but hopefully that is not a deal-breaker for you since you’d be missing out on a gem on PS4! 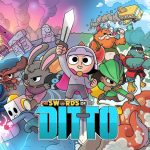 The Swords of Ditto Review

Game title : The Swords of Ditto

Disclaimer
This The Swords of Ditto review is based on a PS4 copy provided by Devolver Digital.