Striker’s Edge is a pixeltastic versus action game from Fun Punch Games and Playdius that you should definitely check out on PlayStation 4. Learn more about this one in our Striker’s Edge review!


Before you take on either local or online matches, you should take a moment to jump into the game’s tutorial. In here the Avatar of Justice, a manifestation of the essence that you, as a warrior, carry within, will show you the basics of the game. You can move around with the left analog stick, and you can attack by pressing on the R2 button. This by itself is useless since you also need to aim with the right analog stick so that your attacks can hit your opponent. You can also use the L2 button to dodge roll to avoid an incoming attack. You can’t attack forever or dodge forever since both actions require stamina, and will thusly deplete your stamina bar. 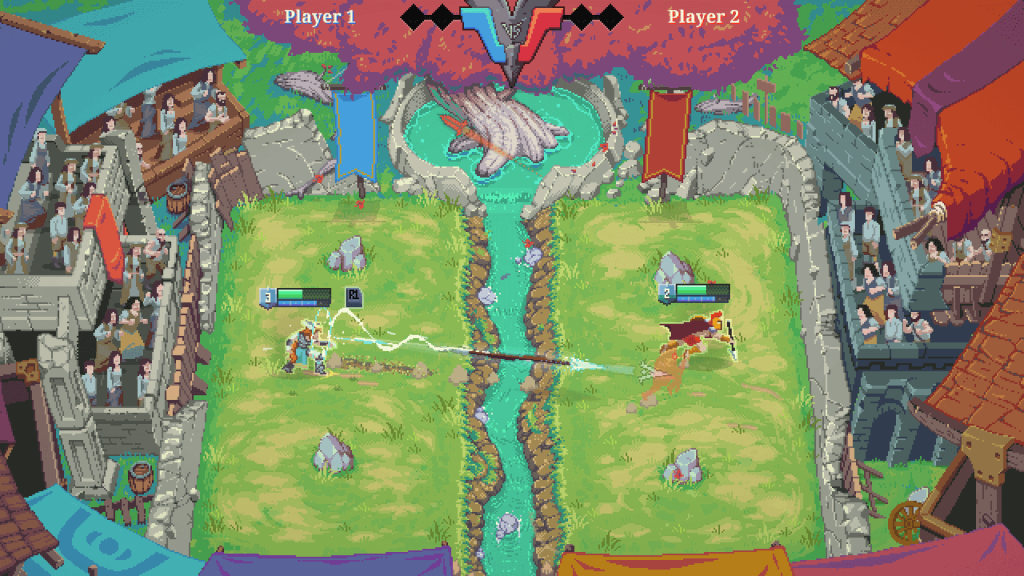 If you’re feeling good about your skills you can use the L1 button to block since you will need to block right before a projectile is about to hit you – oh and you can’t block as much as you want since you have a counter next to your HP and stamina bar that marks how many block charges you have. But if you do block properly, then you will regain some of your HP, so do keep that in mind! An advanced technique is to hold down on the R2 button to charge your attacks, making said attack faster and more damaging while also not using up your stamina bar. Each character has a different special attack you can activate after unleashing a charged attack by hitting the R1 button, so be sure to give that a try to see what each character can do! 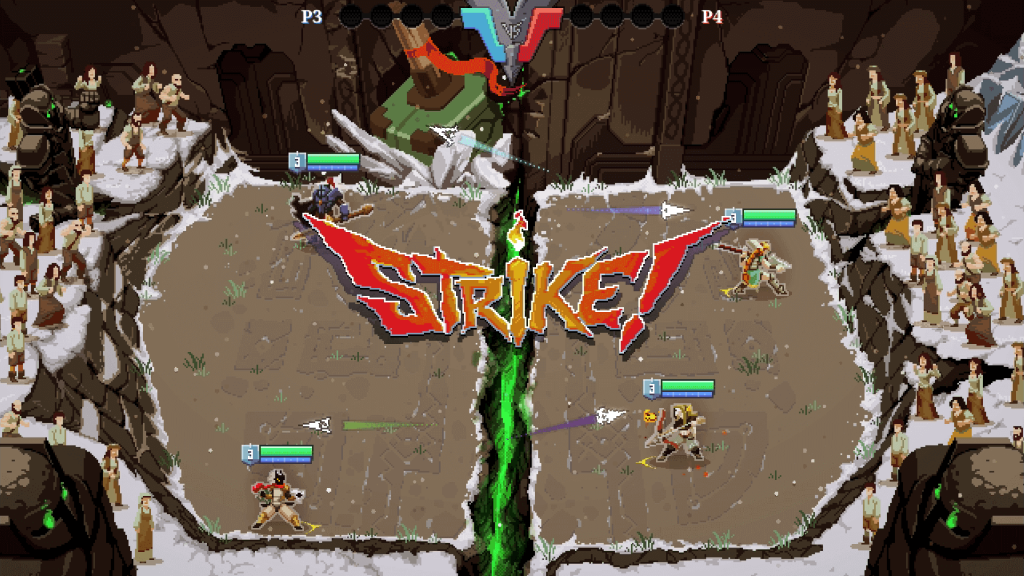 Once you’re done with the short tutorial, you should take on the game’s single player Campaign mode. After selecting your character between the eight available options you’ll be able to select between Easy, Normal and Hard as your difficulty setting. The game will then tell you many centuries ago there was a War of the Gods, and that their blood spilled onto Gea, turning into crystals. The crystals remained inert unless they were activated by special people who shared traits with the God that bled. As Vessels fo the Godsblood, they had superhuman abilities… but their souls ended up being corrupted in the process. 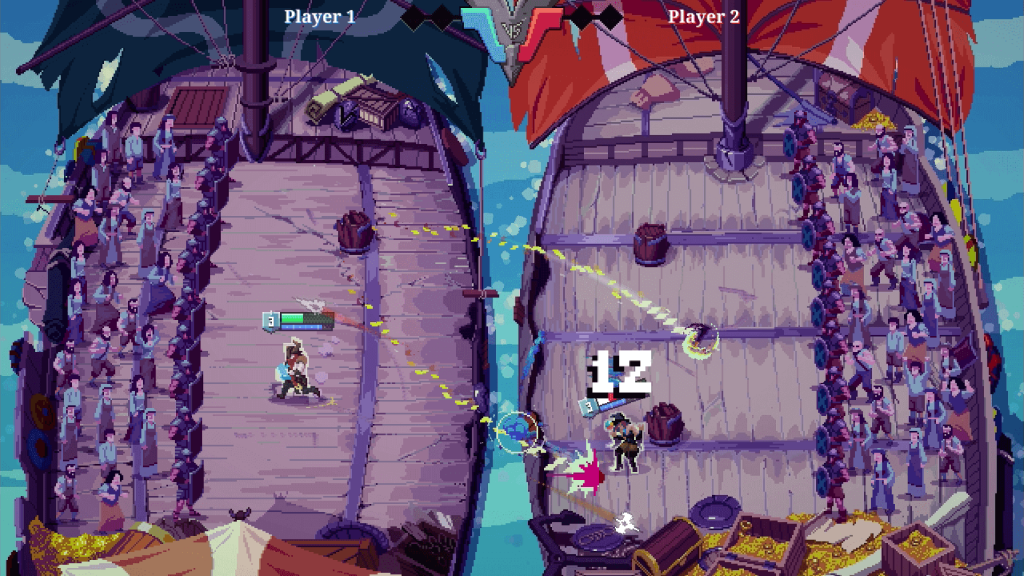 Each of the eight character will have his/her own story background. For example, there’s Eir, a member of the Child of Cold who used to be weak… until she found a Godsblood crystal in the forest near her home that transformer her into a powerful Valkyrie. She was possessed by the Spirit of Justice, and turned into a woman who was incorruptible, true and full of purpose. Because of this, she set out on a journey to end injustice, punish the wicked and bring peace. After a short bit of story text, you’ll be taken to a location where you will battle against the other characters – this cycle repeats until you’ve defeated them all. 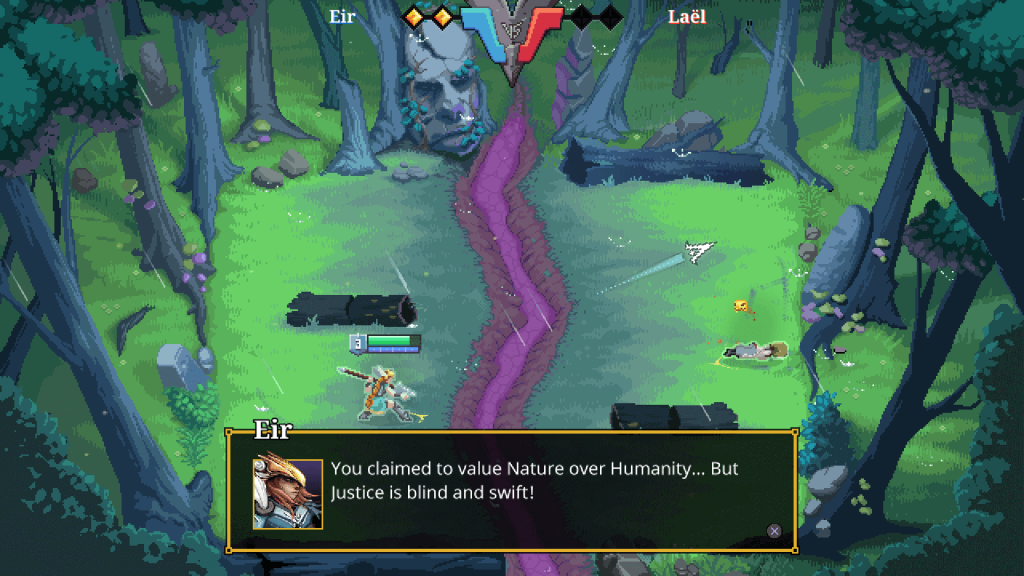 As you battle in the arenas the game has to offer, you will notice that some of them have some extra things going on that you will need to watch out for. For example, one of them has you fighting on opposing moving ships, and as they rock back and forth you might end up against the line of soldiers with shields guarding the people watching the fight, and said soldiers will end up pushing you forward if you get to close, which is bad since you might end up in the line of fire. Each arena also has some objects, such as hollow trees on the ground of the forest, which will cover you and your opponent from your shots, so you’ll need to make sure you’re not wasting your shots and hitting your own cover as you move and roll around. 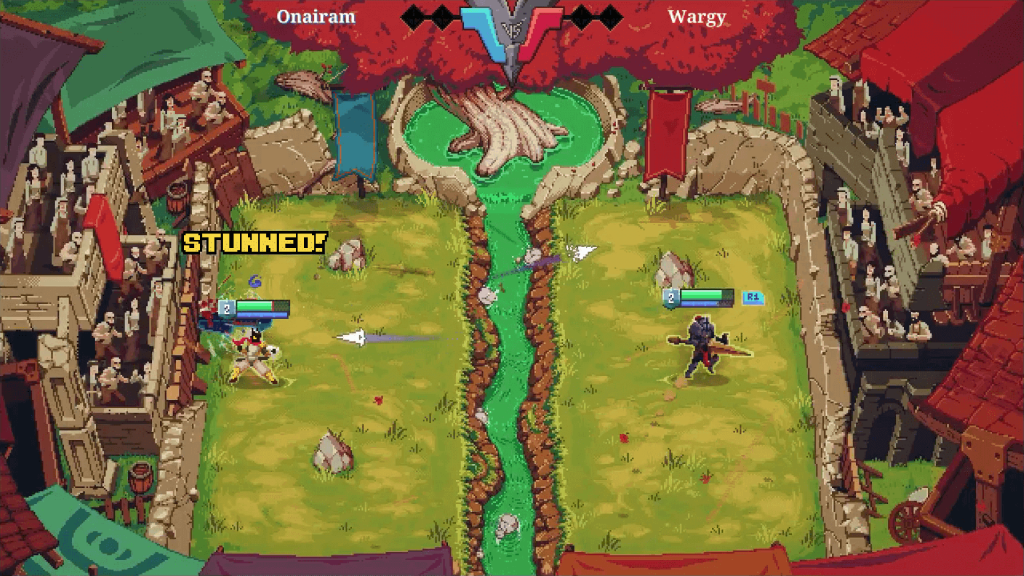 The game includes a full trophy list with a Platinum trophy at the end, and will ask that you do things such as hit someone with a headshot, hit three and ten headshots in the same online match, to win five and ten consecutive online matches, to win 10, 100 and 250 online matches, to play 500 matches total, and more. It’s a long list, and due to its requirement for some of the trophies to be achieved during online matches, you’ll be playing this one for a while. Speaking of which, the online component worked like a charm for me, and once I found an opponent we continued to play around 10 matches or so during an hour since the game allows you to quickly ask for a rematch so that you don’t need to go back to the online lobby. 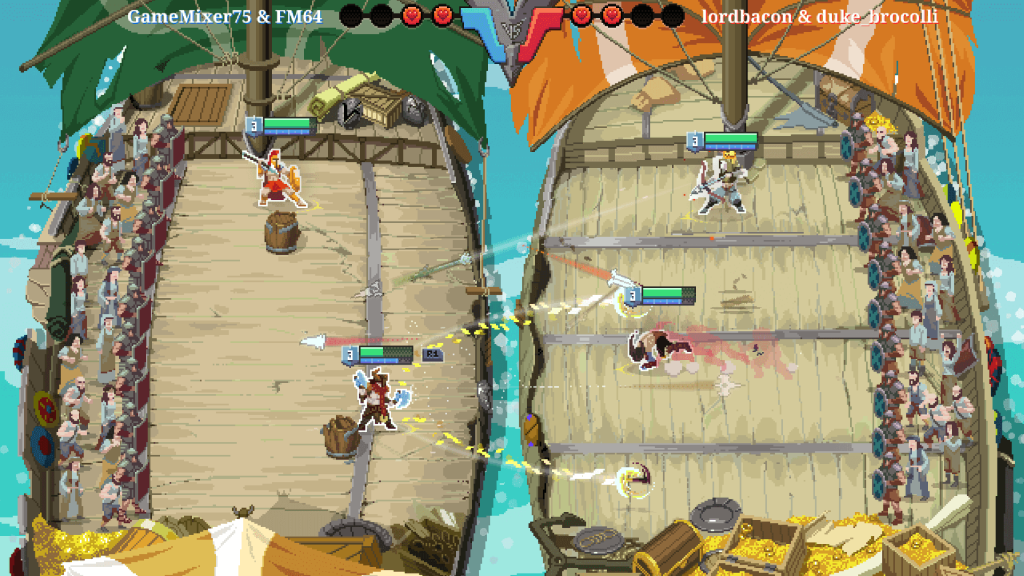 Strikers Edge is a fun arcade-style arena battle release on PlayStation 4 that is worth checking out. The gameplay mechanics are easy to understand but hard to master since this is basically a game in which you try to force your opponent into making a mistake so that you can corner him/her as you throw your weapon to slowly but surely chip at their health. Between the single-player campaigns and the local and online multiplayer side of things, you’ll be spending dozens of hours playing this one on Sony’s home console, and I’m sure you will have a blast doing so. 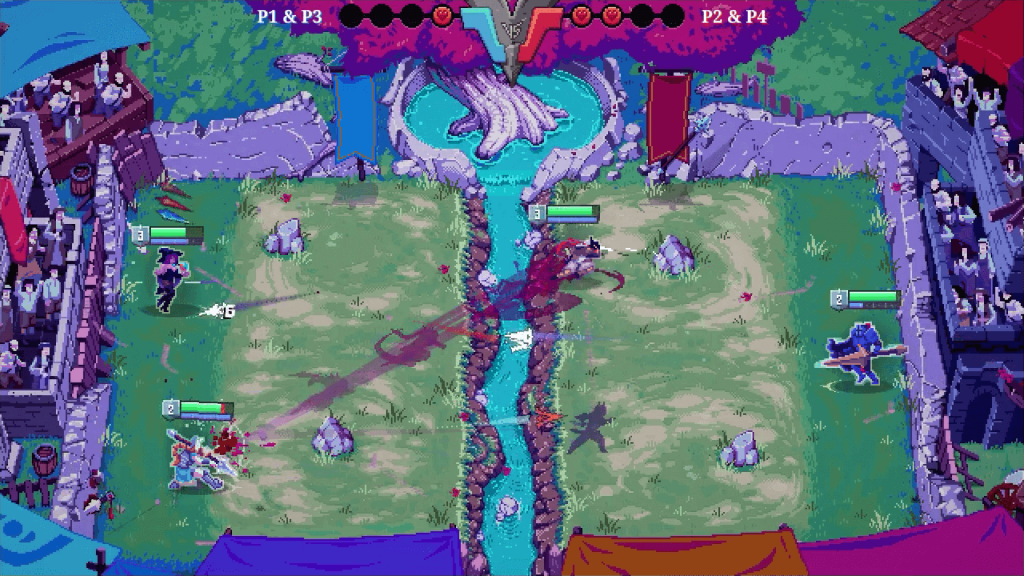 Disclaimer
This Strikers Edge review is based on a PlayStation 4 copy provided by Playdius.