Developed by FinalBoss Games, Vesta is an isometric puzzle platformer that puts you in control of a little girl and her giant robot buddy on her quest to find M.U.M. If that picks your curiosity, then be sure to read our Vesta review!

Meet Vesta, a 6-year-old girl that is the only human left in a big complex run only by machines. In order to find out why all the humans left the place, she’ll go on a quest to find M.U.M., the one machine that runs the whole place. With the help of Bot, a flying droid that guides her through an adventure, and eventually Droid, a giant robot that is essentially a combat machine, Vesta will find a way to reach her goal.

After a couple of levels that basically served as tutorials, I was up and running with how the controls work for the game, and the progression was really smooth for the difficulty of the puzzles. Sometimes puzzlers like this drop the bomb on you with extra hard levels too early in the game, but Vesta was not like this. I always felt like the previous level had prepared me for the one I was in, yet while still providing an acceptable challenge. 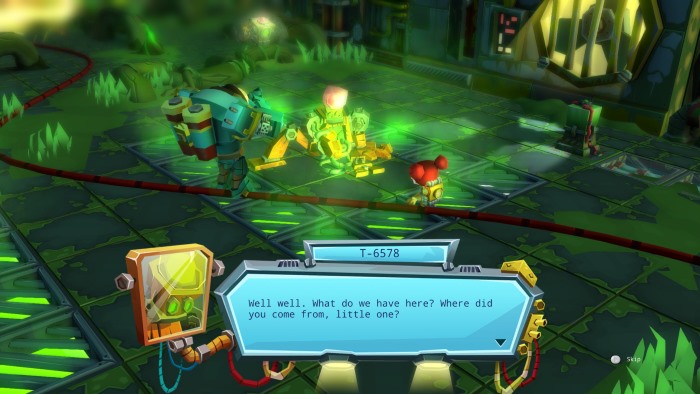 Machines, platforms, doors, and pretty much everything in the factory runs on batteries, so for Vesta to be able to navigate through the levels, she’ll use her handy gun that serves as a container to transfer battery power from one source to another. The problem she’ll quickly encounter is that not all robots are friendly – in fact, the majority are very angry, and they will gladly drop a bomb on Vesta before she can take their energy! This is where Droid will come in handy. As a combat machine, he’s able to fire off rockets that stun robots and gives Vesta just enough time to be able to get their power. And with his size and strength, he’ll be able to throw Vesta over small gaps for her to be able to progress further into an area.


With all those skills in place, your goal is pretty simple: you’ll have to navigate a stage transferring power from one source to another, stacking up energy at times, all to reach the end of the level with the required number of battery slots full, and with Droid at your side. A pretty simple concept that makes it easy to pick up the game, and while in the beginning, the interactions between characters will be at a minimum, the more you advance in the game, the more you’ll have to switch between them to carry on.

While the game is presented from an isometric view that looks good in this indie title, made with the always reliable Unity engine, the one thing that stood out for me is the game’s story cutscenes. They were shown in a nice comic book animation style that brought back fond memories of games such as the Sega Genesis classic Comix Zone – a game available on PlayStation 3 for those of you curious to try it!). 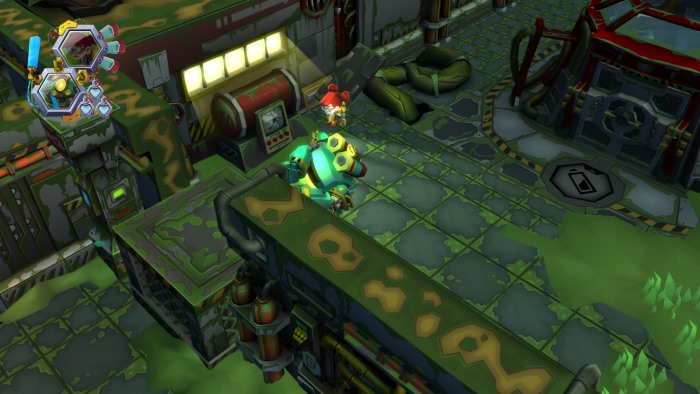 With all the fun I was having with puzzles, I did find Droid a bit annoying to control, mainly when I needed him to shoot some rockets. Your big friend can only fire in 8 directions (just like the good old days of using a D-pad), and with an isometric point of view, moving your analog stick in the direction you actually want to shoot in can sometimes be a frustrating experience. At first it’s not much of a deal, but as the game ramps up in difficulty and you have to shoot at more than one moving robots in succession before pressing a door switch to allow Vesta to cross the door without getting shot, you can, unfortunately, end up restarting the level more times than you thought you would. 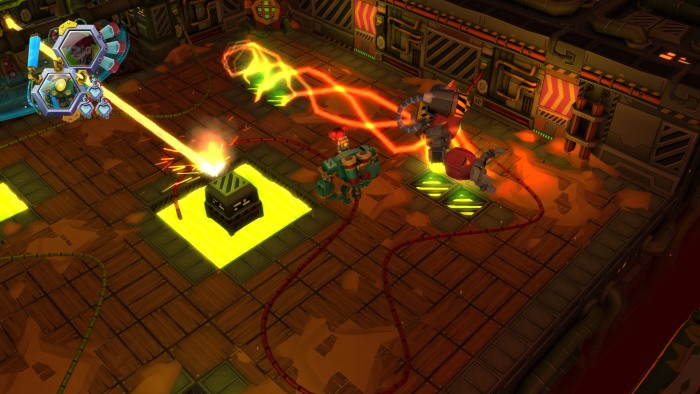 But even considering this little issue, the game is a lot of fun to play. You also have secrets that you can find in the levels, which are basically cogs that serve as the game’s collectibles, and that makes you want to carefully proceed to get them all, but at least you can go back to an area with the game’s level select. On top of this, you’ll also locate computers lying around the place that you can interact with, and this allows you to learn up some bits of valuable information on what happened in there for you to got to be alone.

Those interactions, and obviously finding all secrets, are part of what will give you a couple of extra trophies for the game, the rest being mostly achieved automatically for just playing the game. The sad part about those trophies? It’s only 21 bronze trophies…. unless you’re getting the Asian version of the game since that one includes a Platinum trophy for your trouble.


Final Thoughts
With Vesta, FinalBoss Games have produced a solid puzzle/action title that doesn’t reinvent the genre, but that will surely provide fun for pretty much everyone who likes that kind of game. With a bit over 30 levels, it’s a game that you can casually enjoy for a handful of hours before waiting for the sequel I hope we end up getting.

Disclaimer
This Vesta review is based on a PlayStation 4 copy provided by eastasiasoft.